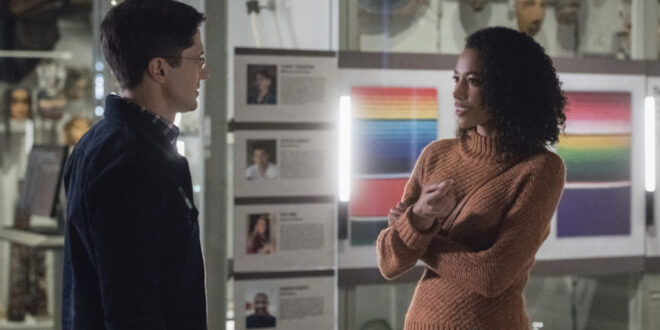 In a world of spoilers, days come and go, sometimes blending into each other. In episode 9 of the second season of The Twilight Zone, “Try, Try,”what if you actually repeated the same day?

Episode 9 – “Try, Try”
Available on CBS All Access
GRADE: B-


Let’s just get this out of the way, it’s like watching Groundhog Day…if it were hosted like a CNN interview and limited to one location. “Try, Try” is the penultimate episode of the second season of Jordan Peele‘s The Twilight Zone, and, if you ever wanted to watch two people debate on the human psyche and the philosophy behind why human beings do what they do on a daily basis, then, this episode is for you.

Kylie Bunbury (TV’s Pitch and Under the Dome) stars here as Claudia, a woman that is at a local museum to study the new exhibit on masks. As she’s talking into her smartphone’s voice recorder app, she is seemingly almost hit by a passing truck but saved, in the nick of time, by Marc (Topher Grace of TV’s That 70’s Show), a kind passerby also at the museum to see the exhibit. Marc pays for Claudia’s admission, and the two bump into one another one more time.

From here, Marc practically finishes the things Claudia is about to tell him and, in an almost psychic manner, tells Claudia about his likes and dislikes as it pertains to art, history, and philosophy — all which accurately align with Claudia’s viewpoints and opinions. However, by the time Marc catches a water bottle thrown their direction like a shortshop catching a line drive, Claudia begins to suspect something is a bit off about Marc.

After Marc’s behavior begins to resemble that of an out-of-control child (he begins lifting up artifacts and screwing around with them, using a boat oar to “play guitar” and whipping a thorned weapon around while wearing a tribal mask), Marc begins telling Claudia the truth: he’s relived this day over and over again for at least a few years, maybe more. He can do pretty much anything he wants and still wake up with the slate wiped clean. In all that time he’s spent repeating the same day, there’s been one thing Marc has wanted: Claudia. He’s in love with her. And today is the closest he’s ever come to actually finally getting her.

The issue is that Claudia feels taken advantage of. Finally buying Marc’s story, she turns the tables on him: even though he’s obviously put in the work, “she” hasn’t actually been there. It’s been Marc attempting to “cheat” to get what he wants by using trial-and-error to clear the path to her. Claudia isn’t comfortable with any of what Marc has done in the past — especially when he becomes malevolent and menacing to her when she shuns his advances.

When I first saw this episode, I wasn’t sold by it. After the second viewing and re-examination of it, I find it to be more clever than I initially thought. Yes, we’ve already explored the whole “time loop” concept but, thankfully, the episode doesn’t give us the same day over and over. It relies heavily on the performances of Topher Grace and Kylie Bunbury, as they hash things out and have a fairly deep conversation over the the concept of time and what Marc has been through and experienced that Claudia has not up until this point.

Grace is great at playing a rational human being while being appropriately chilling and transforming into a believable monster when the time calls for it. Marc is a man that’s lost his mind — but there’s a case to be made here that Marc is already a misogynist and that running through the same day just magnified that side of himself. Bunbury does a fantastic job at selling Kylie’s fear of Marc’s psychosis and plays a strong woman, who reminds Marc that he isn’t “owed” anything no matter how much of a gentleman he perceives himself to be or how much he’s tried to work his way into Claudia’s good graces. The episode’s pacing is perfect here and gives us a fairly satisfactory ending for both characters — though one might have an issue with how talky it gets as Marc and Claudia pontificate and debate endlessly, until we get an intense but off-beat climax.

“Try, Try” is very much like Groundhog Day, if you took away the 90’s rom-com setting, showcased just one day in the time loop, and made the male lead into a total creeper. It’s certainly one of the more intelligent outings of the second season.

Matt Perri is one of those literary Ronin you’ve never heard of until he shows up and tells you he’s a literary Ronin. He’s a native Californian, a film buff, old school gamer geek, and a sports/entertainment fan. A lifelong Giants, 49ers and Sharks fan, he also covers the world of pro-wrestling, writing recaps for WWE Monday Night RAW and Total Divas at Scott’s Blog of Doom. You can follow the guy on Twitter via @PerriTheSmark as well as here at The Workprint and his own blog, Matt's Entertainment.
@PerriTheSmark
Previous ‘The 100’ Season 7 Episode 7 Review: “The Queen’s Gambit”
Next ‘Stargirl’ Episode 8 Review: “Shiv Part Two”