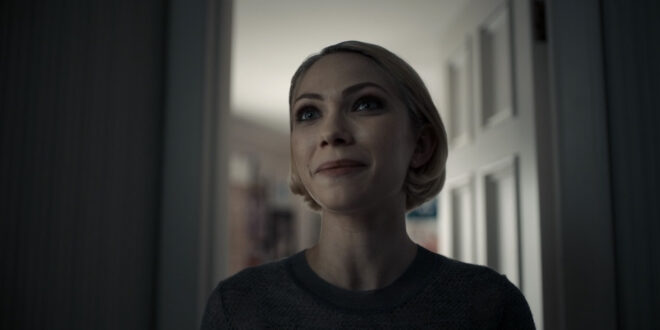 Tavi Gevinson in "The Twilight Zone" on CBS All-Access.

In a world of spoilers, we come across episode 7 of the second season of The Twilight Zone. The episode is “A Human Face.” How did it do and what grade did it get? Let’s find out together.


Last year, an alien by the name of “A. Traveler,” a YouTube/social media sensation, invaded Earth and sent his buddies down to conquer it all while getting the people of a small Alaskan town to trust him. This year, it’s a gelatinous blob thing that does the honors — this time, imitating the long-dead family members we held dear to our hearts and memories. So goes the concept of “A Human Face,” the seventh episode of the second season of Jordan Peele‘s “The Twilight Zone” — an episode that continues to show us that the showrunners still have no real logical idea how aliens might do us in.

Robert (Christopher Meloni of TV’s Law & Order: SVU and Harley Quinn) and Barbara (Jenna Elfman of TV’s Dharma & Greg and Fear the Walking Dead) are a married couple whose daughter has passed away. They have sold their home and are moving somewhere else — the day a solar flare is headed to Earth. Of course, we know that the majority of solar flares are safe (their radio news people tell us this) — but this is The Twilight Zone, so we know that some freaky stuff is about to happen. Robert’s all business. taking apart his late daughter’s bed while Barbara waxes emotional about how “scattered” she was. Robert immediately objects to this, telling his wife that she’s wrong with the same dismissive, obnoxious, condescending tone he used when he explained to her that their “phone runs off the Internet” — and that was just disconnect, so forget using the phone.

As Robert takes his daughter’s old bed apart, a sort of phenomena hits the room, causing the walls and ceiling to temporarily warp slightly and there’s a high-pitched sound. Something has landed in their home. Robert and Barbara hurry downstairs to the their basement where they slowly turn the corner to find an undulating slug-like creature eating part of a wooden table. The creature screams at them, so the couple get the hell out of dodge and head back upstairs to argue and fight over what they’ve just seen, leading them to head back downstairs to check things out. The alien is still in the basement, huddling in a corner like a wounded animal. It lashes out and them — before taking the form of Maggie, their late daughter (Tavi Gevinson of TV’s Neo Yokio and the upcoming reboot of Gossip Girl).

At first, “Maggie” is much like an alien Turing Test. It simply says arbitrary things that Maggie used to say to her friends and parents. Barbara becomes misty-eyed. To her, this is her daughter. However, Robert, (despite his somewhat abusive behavior) rationally attempts to explain to his wife that this thing isn’t Maggie. It’s just saying things Maggie says. That is until “Maggie” and her thoughts begin to evolve past “I want pizza,” and, soon, she’s tugging at her mother’s heart, begging for help.

“A Human Face” hearkens back to the 1985 incarnation of The Twilight Zone when the producers of that version got cancelled mid-second season and went into syndication for the third season. What you see here is almost an imitation of that show, cheap special effects and all. That isn’t to say that, when the slimy, globby alien jumps at Robert and Barbara, you aren’t frightened (it’s fairly convincing), but the bit where Maggie suddenly stops being human and transforms into a humanoid lifeform made of pure light and energy looks like it’s right out of the 1985 Twilight Zone handbook.

Additionally, what is this supposed to be, exactly? Even if you excuse the fact that Barbara’s character is passive and gullible, it’s really odd that Robert eventually seems to cave to the idea that the alien is his daughter. He spends the entire episode berating his wife for going along with Alien Maggie’s antics, then calls it a con — but then, hey, it’s an alien who looks like my daughter so I better hold her hand? It feels even cheaper knowing that it’s practically blackmail: the alien force “Maggie” represents is gonna conquer the Earth, so we might as well show some love…or else.

I love every incarnation of The Twilight Zone because each of them had standout episodes. I’ve been a fan of this series since my grandmother got me hooked on the show when my local California Bay Area station ran marathons in the summer. It’s hard to get behind “A Human Face”. Robert and Barbara’s foibles aside, the “alien race” here is just dumb as a bag of rocks. Their alien lands and, in front of the people it’s trying to trick, turns into their daughter. Then, it spends the rest of the first half of the episode attempting to convince the two that it is their daughter — before doing a complete 180 and reciting a lengthy monologue along the lines of “Ok, we all know I’m not really her — in fact, I have zero idea why I spent the better part of this episode attempting to trick you — but I know all the things she did and I promise I won’t invade your little planet with the destroyer/invader thing we brought with us if you just promise to be all lovey-dovey and treat me like your dead daughter, m-kay?”

I just can’t back an episode, which makes you do Olympic-level mental gymnastics to try to explain suddenly shifting character motivations. It’s the equivalent to being saddled with a bunch of kids who are all assigned the same project but who have you do all the work because you’re the only one concerned with getting into a good school later in your life.

Matt Perri is one of those literary Ronin you’ve never heard of until he shows up and tells you he’s a literary Ronin. He’s a native Californian, a film buff, old school gamer geek, and a sports/entertainment fan. A lifelong Giants, 49ers and Sharks fan, he also covers the world of pro-wrestling, writing recaps for WWE Monday Night RAW and Total Divas at Scott’s Blog of Doom. You can follow the guy on Twitter via @PerriTheSmark as well as here at The Workprint and his own blog, Matt's Entertainment.
@PerriTheSmark
Previous ‘Dirty John: The Betty Broderick Story’ Episode 6: Review
Next ‘Doom Patrol’ Season 2 Episode 4 Review: “Sex Patrol”