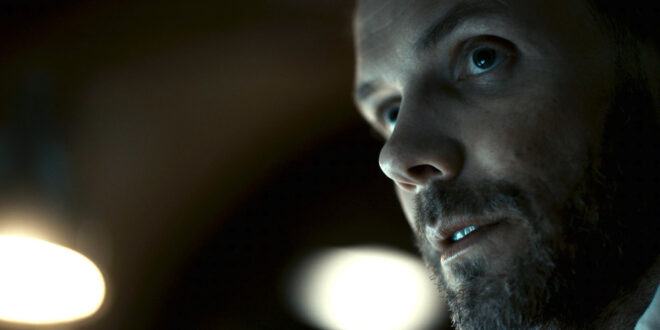 Joel McHale in "The Twilight Zone" on CBS All-Access.

In a world of spoilers, episode six of The Twilight Zone on CBS All Access is said and done. How did it go? What grade did it get? Find out.


What if our activities on Earth caused a formerly Beta species to rise up and evolve beyond what humans are capable of? That’s the question the sixth installment of the second season of The Twilight Zone asks its audience — but the episode, inspired and ambitious though it may be, is a failure of execution.

In the middle of the Antarctic, Dr. Orson Rudd (Joel McHale of TV’s Community) and his crew of scientists are studying the reduction of the great ice shelf and what it means for the rest of the world. Even though things look bleak for Rudd, he believes he’s fighting the good fight and he’ll be able to help save lives. His right hand, Channing (Nadia Hilker of TV’s The Walking Dead), is getting cabin fever. His crew mirrors Channing, as they sit around, attempting to pass the time, watching television or getting high to dull an even duller existence.

It isn’t until something living under the ice takes out two of the outpost’s scientists that the monotony is broken.

Then comes the debate: Frisch (Brandon Jay McLaren of TV’s Graceland and Ransom) is baked enough to want to go down into the water to see what they’re dealing with and make a token attempt to retrieve who they’ve lost in whatever shape they might be in. Rudd’s obviously against it. That doesn’t stop it from happening and, soon, the station has a body, which has marks all over their face. The only evidence of their murderer is a slimy trail leading to an occasionally shaking ice cooler. When the crew looks inside, they find what appears to be your standard octopus.

But octopi aren’t hostile, are they? They don’t really attack humans, and they certainly don’t kill them…right? That sparks another debate: what should the crew do with their new sea friend? Frisch and Larry (Tim Armstrong of the band, Rancid) both want to end its life right yesterday — but Chinese scientist Ling (Michelle Ang of TV’s Neighbours, The Tribe) wants to study the thing since this might just be a new species they’ve never seen which, if you’ve seen any film pertaining to corporate scientists studying alien species, is never a good idea.

Lo and behold, our aquatic suspect breaks free of his tank and manages to pick off Larry and Frisch…and I wish I could say that was the end.

“8” is downright frustrating. On the one hand, the lesson to be learned in this episode is that the species of animal we know to exist (and don’t know exists) are capable of taking us all out. The entire premise is helped along by recalling the claustrophobic dread of films like John Carpenter‘s The Thing and Ridley Scott‘s Alien. The murder scenes are top-notch, given the right amount of care so as to provide pitch-perfect build-up. But, ultimately, you’re just watching the story of a pissed-off, vengeful, murderous octopus that chokes the shit out of people and, sometimes, plucks an eye out. It comes off less like Alien and more like a goofball creature feature The Asylum would pump out and put up on The SyFy Channel.

It especially gets silly when we’re led to believe that the octopus has copied and altered its own DNA to become more intelligent. By using a handheld computer device. Like, it stole one and then worked on copying DNA. I expected so much more from a script, written by former X-Files alumni Glen Morgan.

The funny thing is that I have friends and family, who read these reviews and most of them think the new Twilight Zone is a bunch of crap. “8” is certainly an episode which would prove that theory.

Matt Perri is one of those literary Ronin you’ve never heard of until he shows up and tells you he’s a literary Ronin. He’s a native Californian, a film buff, old school gamer geek, and a sports/entertainment fan. A lifelong Giants, 49ers and Sharks fan, he also covers the world of pro-wrestling, writing recaps for WWE Monday Night RAW and Total Divas at Scott’s Blog of Doom. You can follow the guy on Twitter via @PerriTheSmark as well as here at The Workprint and his own blog, Matt's Entertainment.
@PerriTheSmark
Previous ‘Stargirl’ Episode 7 Review: “Shiv Part One”
Next ‘Dirty John: The Betty Broderick Story’ Episode 6: Review

In a world of spoilers, days come and go, sometimes blending into each other. In …