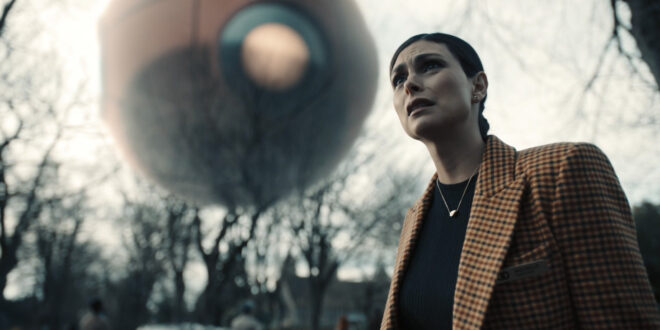 Season 2 of The Twilight Zone continues with episode 2, “Downtime,” on CBS All Access. Find out how it did and what grade it got.


What if the world around you wasn’t real? What if everything you knew — your spouse, your kids, your relatives, your job, everything you owned, knew, and loved — was a complete lie? Stop me if you’ve heard this one. Science-fiction classics such as (Lilly and Lana) The Wachowskis’ The Matrix, Alex Proyas‘ Dark City, Alejandro Amenábar‘s Abre Los Ojos (Open Your Eyes), and David Cronenberg‘s Existenz have all covered this concept. Frustratingly, “Downtime” (the 2nd episode of the new season of The Twilight Zone currently airing on CBS All Access) has the potential to join that list but botches the execution.

Morena Baccarin (Firefly, The Flash) plays Michelle Weaver, a ruthless, yet driven go-getter that works for the Farringham Hotel in an undisclosed city. She’s vying for the position of hotel manager — and gets it after telling a fairly objectionable joke to her boss before he promotes her. Some of the staff waits outside to applaud her, and she wanders the halls, looking sharp and confident, like a shark. Everything is perfect. She deals with the most angry hotel customer with patient precision, smooth as the blade of a chef’s knife.

But, then, a curious thing happens while she takes a break at a local coffee shop: her ears ring, her heart pounds, and, when she comes to, she walks outside to see the population of the city, staring up an impossibly large red orb with a yellow “eye” floating in the sky. This is “downtime,” she’s told by various citizens of the city — before those citizens also freeze and look up at orb with wonder, mouth agape. Even her husband tells her it’s “downtime” before wandering outside and freezing up while looking at the sky, leaving Michelle in a waking nightmare and wondering if anything will ever return to normal.

We learn (fairly early) that Michelle and her entire world aren’t real. It’s part of an alternate world created by a sleep-aid system called “Sleepaway,” which allows the sleeper to have lucid dreams where they’re successful and happy. Unfortunately for Michelle, her human counterpart (the one dreaming her up in the real world) has just had a major health issue that has incapacitated them to the point where Michelle is stuck while the customer service avatars attempt to console and help Michelle through the problem. Ultimately, Michelle is given the choice between “logging out” or staying in her fake “world” for good without the aid of her human counterpart — provided she never “breaks character”.

Imagine being told that your options are to continue to live a life you know is synthetic or stepping out of it and choosing to no longer exist. What would you do in a situation like that? It’s interesting, to say the least.

Jordan Peele, the producer/narrator of this series and the writer/director behind such modern classics as Get Out and Us, finally contributes an episode of the series he holds dear (he wrote it but did not direct it), and that’s something to celebrate being that Get Out and Us feel like extended Twilight Zone episodes.

First and foremost, Morena Baccarin’s is excellent as Michelle. To see someone with all their wits about them suddenly and completely break down in the face of extraordinary circumstances is something to behold and she pulls it off nicely.

The issue is with Peele’s script which, while giving us something to think about, also gives us a story that feels as though it needs more time to “cook”. The overall concept is unbeatable but, at 30 minutes (I cannot believe I’m about to say this), this is one episode which needed to be longer, especially as it pertains to Michelle as a “character”, The whole story is ultimately damaged, first, by the decision to divulge the secret of Michelle and her world ten minutes in and, second, by skipping all the suspense necessary for a story like this to thrive, while wrapping everything up quickly with a nice happy bow.

Yes, Michelle runs and hides from the people that are ultimately attempting to come to her aid, but it doesn’t feel like she’s in any danger. All of this results in Peele explaining to us that Michelle is now a different — and more content — person than when she started — except her “change” is so sudden. It seemingly runs contrary to what Peele’s telling us.

And, so, “Downtime” is what it is: a decent sci-fi offering with an underdone script — though, knowing what he’s capable of, I would love to see Peele expand upon what he gave us here in the future.

Matt Perri is one of those literary Ronin you’ve never heard of until he shows up and tells you he’s a literary Ronin. He’s a native Californian, a film buff, old school gamer geek, and a sports/entertainment fan. A lifelong Giants, 49ers and Sharks fan, he also covers the world of pro-wrestling, writing recaps for WWE Monday Night RAW and Total Divas at Scott’s Blog of Doom. You can follow the guy on Twitter via @PerriTheSmark as well as here at The Workprint and his own blog, Matt's Entertainment.
@PerriTheSmark
Previous ‘The 100’ Season 7 Episode 6 Review: “Nakara”
Next ‘The Twilight Zone’ Season 2 Episode 3 Review: “The Who of You”

In a world of spoilers, days come and go, sometimes blending into each other. In …