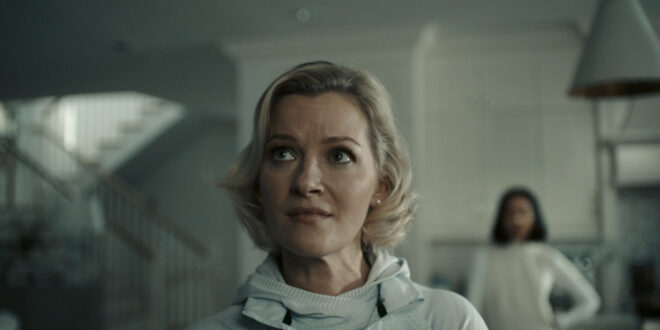 Gretchen Mol (left) and Greta Lee (right, in background) in "The Twilight Zone" on CBS All-Access.

In a world of spoilers coming to an end, the season 2 finale of The Twilight Zone is here. Do we get what we want or is it what we need? Find out in our review.


Housewife Jane Warren is stuck in a tree. She’s unable to move because one of her legs is tied to a medicine ball, which is also tied to a large chair from her bedroom. Jane knew she’d be abducted. She saw the video footage of it from a baby monitor she put on her dresser. The tractor beam that sucked her into the large flying saucer above her house is unable to complete the abduction because it can’t pull Jane, the ball, and the couch through the window.

Jane looks down at the aliens who have attempted to abduct her. They’re pointing at each other as if to blame one another. They’re at a loss at what to do next, but they do know that they’re awfully hungry right now. So, there’s that. When Jane yells for help, they tell Jane that they “only work here,” so they’re pretty useless, it seems. “Take me to your supervisor!” she exclaims with full Fury of Karen.

The Twilight Zone goes full Black Mirror for its finale, “You Might Also Like,” an incredibly off-beat satire on American consumer culture.

Jane Warren (Gretchen Mol of TV’s Boardwalk Empire) is being offered to pick up her brand-new “Egg”, a mysterious…thing that everyone must have for some reason — even though nobody knows what it is or what it does, something that gnaws at Jane. Her neighbor, Mrs. Jones (Greta Lee of TV’s Chance)…well, she thinks Jane’s kitchen is well-lit — just not as well-lit as her kitchen. Mrs. Jones is due to pick up her “Egg” in about a couple hours. Jane’s “Egg” isn’t due to be picked up until 4 PM. Mrs. Jones looks at Jane with sympathy. How can she wait so long? Jane’s also been blacking out and waking up in her bed every few hours. While asleep, we get “commercials” that advertise various products she should have if she wants her life to be complete — including the “Egg,” which will “make everything OK again — this time, forever.”

When Jane attempts to appeal to Mrs. Jones for emotional support, Jones just cannot get over how cute her bedroom is, before stating she should leave because she’s gotta go pick up that Egg! Jane grabs her and begs her to stay, which just plain amuses Mrs. Jones who simply asks, “Are you touching me?” Jane just wants to know what’s going on. She’s so alone. The “Egg” is making her nervous. The blackouts are getting more frequent, and Jane’s really lost her mind.

When she attempts to go against the grain and cancel her Egg, she has to wander through a labyrinthine phone maze just to tell a computer what she wants — and that computer transfers her to a “supervisor” that’s very surprised that Jane doesn’t want her Egg anymore. The supervisor, on the other end, would like to know why. Jane just explains that she’s “changed her mind,” that she doesn’t want one. The supervisor simply asks if there’s anything more that Jane needs. Jane would like to know if the order’s been cancelled. The voice, in a slow, robotic, eerie tone, replies that they are “processing her request” — then hangs up on her.

This brings us to the aforementioned moment when Jane requests to speak with a supervisor, and now she’s up in the alien saucer — where everything will finally be revealed.

Last year, Jordan Peele‘s The Twilight Zone finished its season strong with the incredible “Blurryman,” a wonderful ode to the show’s past. The second season finale doesn’t really get as meta as that episode did, but it’s a weird, wonderfully weird, ode to the show’s past and an entry that has much to say about who we are and where we’re going as a species. The off-beat satirical edge and straight-faced deadpan delivery of it all recalls the brilliance of Darin Morgan‘s X-Files efforts, “Jose Chung From Outer Space,” “Clyde Bruckman’s Final Repose,” and recently, “The Lost Art of Forehead Sweat.”

Like “Blurryman,” the episode is going to be divisive. The more cynical viewer might see this as writer/director Osgood Perkins (Gretel & Hansel, I Am the Pretty Thing That Lives Inside This House) being self-indulgent and giving us “odd for the sake of odd,” but to do so is really missing the point. When it comes right down to it, the episode is more than just a homage. It’s a study of how disconnected we are, how robotic we’ve become, how alone we really are (especially when dealing with crippling depression as Jane does) — and how all those emotions are toyed with and used against us for financial gain by cynical corporations which run our lives whether we like it or not.

“You Might Also Like” is science-fiction brilliance and a fitting finale for a consistent second season of The Twilight Zone.

Thank you so much for sticking with me through my reviews for The Twilight Zone. I will be back to cover a third season, should it get greenlit. I will definitely be covering the third season of Cobra Kai, so stay tuned for that.

Thank you for getting “lost in the Zone” with me each day and stay safe and healthy in these uncertain times!

Matt Perri is one of those literary Ronin you’ve never heard of until he shows up and tells you he’s a literary Ronin. He’s a native Californian, a film buff, old school gamer geek, and a sports/entertainment fan. A lifelong Giants, 49ers and Sharks fan, he also covers the world of pro-wrestling, writing recaps for WWE Monday Night RAW and Total Divas at Scott’s Blog of Doom. You can follow the guy on Twitter via @PerriTheSmark as well as here at The Workprint and his own blog, Matt's Entertainment.
@PerriTheSmark
Previous I May Destroy You Pilot Recap – “Eyes Eyes Eyes Eyes”
Next ‘Dirty John: The Betty Broderick Story’ Episode 7: Review