The Issue With ‘Luke Cage’

For all of the greatness and pomp and circumstance surrounding the arrival of Luke Cage, there was still worry about whether or not it would be a great show. Thankfully, Luke Cage delivered. As seen in the features covered on The Workprint these past few days, the series provides us a look inside Harlem, celebrates black women in unconventional and innovative ways, has a hot soundtrack, and provides us with a prominent black superhero on television. There’s just one issue–Luke Cage isn’t really that great.

Bear with me here because I know I’m about to ruffle some feathers. The concept of the show is that Harlem is struggling because of young hoodlums who use the “n-word” and it’s Luke Cage’s mission to clean up the streets and bring it back to the good ol’ days when old ladies could at least expect to have their groceries carried. Give me a break. Cage loathes the use of “the n-word” and the actor himself, Mike Colter, voiced how he believes Luke wouldn’t be a “person to use that language.” As if the use of a word tied to someone’s own culture–a culture Cage celebrates himself–contributes to someone’s character.

Luke Cage, as a character, isn’t charismatic, nor is he ever really as enjoyable as watching Deadpool or Iron Man. You can sense the boredom that he carries around which may be why the host of other characters seem so much more intriguing. The mystique surrounding Cage regarding his history and his whereabouts are the driving force for him behind most of his actions, but you’re not going to get a joke or a shiny smile out of this hero. 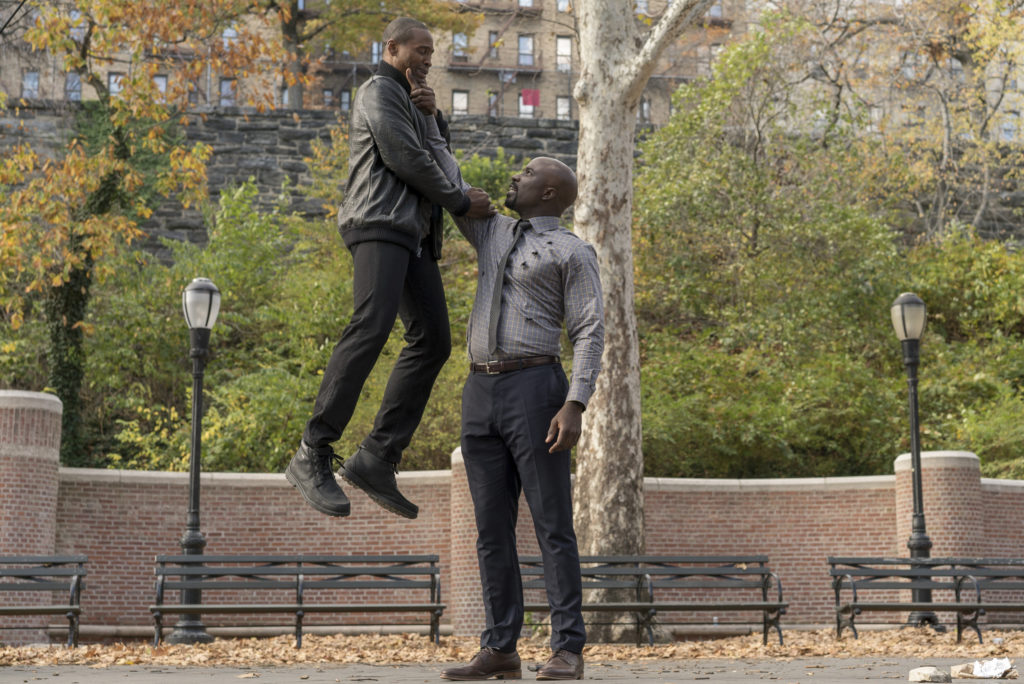 Moreover, there’s a weird sense that although the Black Lives Matter movement is acknowledged, the show is more of a call back to black on black violence. Despite the failures of the police officers on the show, it’s Harlem’s responsibility to clean up its own act and get rid of the hoodlums that populate the street. Police officers can be picked up and thrown while still being respected. Meanwhile, the youth of this neighborhood cannot be saved by Cage and instead are judged for making the wrong decisions. If Cage’s mentor, Pop, was still a kid when Cage was a hero, he would’ve wasted no time in feeding him to the wolves, despite the fact that Pop made a turn around after a stint in prison.

While I appreciate the portrayal of Luke Cage as a savior, it would be nice to have someone who challenges him to see things a different way without being looked at as insane (Diamondback), overwhelmed (Misty Stone) or morally corrupt (Cottonmouth). There’s a place in me that feels that once the season was over, Cage learned nothing whatsoever except that it was time to stop hiding from his past. His journey had been less about accepting the people around him for who they are and more about having to follow the rules of the corrupt system. His potential love interest, Claire Temple, even references Daredevil, stating that she knows a “very good lawyer.” It’s as if Cage is accepting of the order of systematic oppression until someone from his community fights back or goes off the path he would prefer.

Since the premiere, the reception to Luke Cage’s protagonist has been turbulent. Someone on Twitter even likened him to “Herman Cain with superpowers.” Yikes. Other characters like Mariah Dillard and Cottonmouth are given an opportunity to display depth which provide us with a clear of who they are as characters. Luke Cage does get a backstory of how his powers were acquired, but unfortunately, we never get to see the nuances and layers that make him who he is. There’s no conversation happening among the people he’s around other than his feelings towards his past love, Reva, and the moral decay he witnesses throughout Harlem. Cage never confronts his own motivations. Hell, we know more about why Diamondback feels the way he does than the star of the show.

Overall, the show provides an excellent look inside of a neighborhood we’ve needed to be seen on television for a long time now, and there are characters who are intricate and I hope to see further within the next season. Maybe even the star can finally show us why we deserve to have a bulletproof hero in a hoodie.

All thirteen episodes of Luke Cage are available to stream on Netflix.

Previous article
NYCC 2016: ‘The Exorcist’ Interview with EP Jeremy Slater
Next article
‘How To Get Away With Murder’ Review – “Always Bet Black”