‘How To Get Away With Murder’ Review – “Always Bet Black”

Spoilers through How to Get Away With Murder season 3, episode 3: “Always Bet Black.”

There’s a sense of disappointment in the air after this week’s episode of How To Get Away With Murder. In the last few minutes, we found out another person who isn’t on that stretcher and unfortunately, it isn’t Bonnie/pseudo-Sarah Paulson. Oh, joy.

One of the first scenes in “Always Bet Black” provides us with Nate and all of his godliness. Apparently, Annalise is trying to set up boundaries between the two in terms of work after Nate decides to take it upon himself to search for Frank. Clearly, this may end up not working in Annalise’s favor as Nate doesn’t ever seem to listen and for a woman as dangerous as the one he loves, it’s only going to get worse before it gets better. As long as he isn’t the one on that stretcher, we’re good, though.

Meanwhile, the main case for this week revolves around Toby who has been trying to get a fair trial thanks to being in the presence of a young escort who ends up dying. Michaela takes on the case, which proves to be disturbing for her as he overtly flirts with her and also delights in the fact that he takes selfies with the deceased woman instead of calling 911.

Annalise guarantees that he won’t go to prison and will provide him with a fair trial. Ha.

Turns out, Toby is being blackmailed by a previous lawyer and bargained $200,000 so that no one will know that he killed an entirely different woman after she didn’t want to sleep with him. Needless to say, Toby is not one of the favorites and ultimately, makes for a less than exciting episode. Thankfully, Annalise gives him a well needed and quite exciting slap after he complains about actually having to go to prison for three years, despite killing two women. 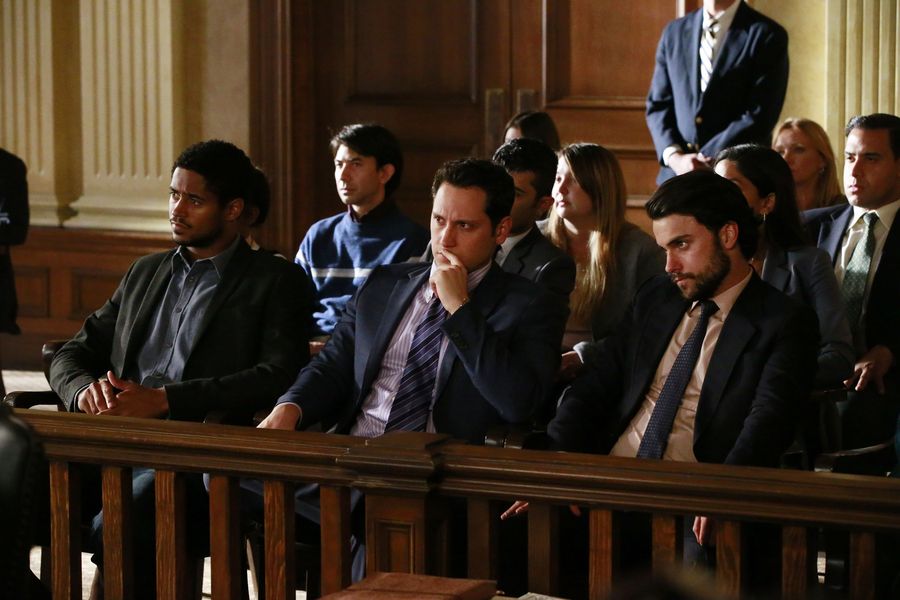 Connor and Olivier meanwhile are going through their regular battle between trying to be friends and work cooperatively in a space of also being exes. Laurel is using her father to find Frank but that opens up a can of worms due to her father abandoning her mother and her. She also finds out that he’s been wire-tapping her phone and doesn’t think Frank is a good fit for her. So all in all, though they’ve cleared the air, Frank isn’t worth having to go through the drama between her and her father. He tells her that Frank is in a motel in Philadelphia but Laurel tells Annalise a lie in an effort to protect Frank.

These lies that everyone is telling each other won’t serve to do anything good for none of the characters. Connor and Olivier are still confused about their future, Wes has lied about his real feelings for Laurel to his girlfriend, Annalise is trying to protect Nate which won’t do her any good and Laurel is trying to get to Frank not knowing the full circumstances at hand. This won’t work out good at all.

How To Get Away With Murder airs Thursday on ABC at 10pm EST.