There will be spoilers. For a more spoiler-free discussion, check out Bilal’s review of the first five episodes. Or if you’re interested in the comics, Terence has an excellent write-up on what you should read.

“Heroes and their consequences are why we have our current opportunities.”

If you haven’t watched Marvel’s Daredevil, I’m here to tell you why you should at least put on the first episode (because then it’ll be the second and third and so on). If you have already binge-watched the series, high-five! Let’s have a chat.

Daredevil is the first of five planned Marvel shows on Netflix. It’ll be followed by A.K.A. Jessica Jones, Luke Cage, and Iron Fist, all of which will then culminate into The Defenders. Because Daredevil is the first, there’s a lot of pressure on it to set the tone for each subsequent series. If Daredevil fails, the sentiment will likely trickle down to the subsequent series, leaving us all sad. Someone will then write an article about how Daredevil killed comic book shows and movies. Thankfully, Marvel’s Daredevil is fantastic, something apparent right from the beginning, and if someone decides to write that article anyway, we gather our pitchforks.

The first episode, “Into the Fire” begins with a glimpse into Matt Murdock’s (the titular Daredevil himself) life, or namely, the moment he became blind as a child. It’s a sad scene, sure, but the important part is that there isn’t a 30-minute history lesson. Small kid gets into an accident, goes blind, screams, end scene. Boom. Perfect. So many shows and movies feel the need to narrate the back story before actually getting to the heart of it all and that’s boring. Daredevil, on the other hand, seamlessly weaves in these flashbacks and is very careful not to linger too long in the past, because the exciting parts are in present Hell’s Kitchen.

And five minutes into the show, that’s exactly what we get to. I was worried when Marvel TV Chief Jeph Loeb announced that Daredevil would be more a crime drama than a superhero show. And while Loeb is correct in his assessment, there also isn’t a dearth of action. Right off the bat, Matt Murdock (Charlie Cox), clad in the black mask known from “A Man Without Fear,” puts a stop to human trafficking down at the docks with his bare hands. (An aside, terrible things always happen dockside. Why is there not better lighting or security to prevent such trouble?)

An established fighter Matt may be, but he is not quite there in terms of his career as a lawyer. In fact, much of the first episode follows this beginning arc and the inception of his firm, Nelson and Murdock. Matt and his best friend, Foggy Nelson (sweetly played by Elden Henson), fresh from law school are out to obtain an office, clients, and hopefully some money along the way. It’s a day and night (literally) shift from the horrors of the previous night, as Foggy and Matt cheerfully look over real estate and argue about clients. Even the discussion about what led Hell’s Kitchen into more misery, the Chitauri Invasion from The Avengers, is brief but not exactly morose. 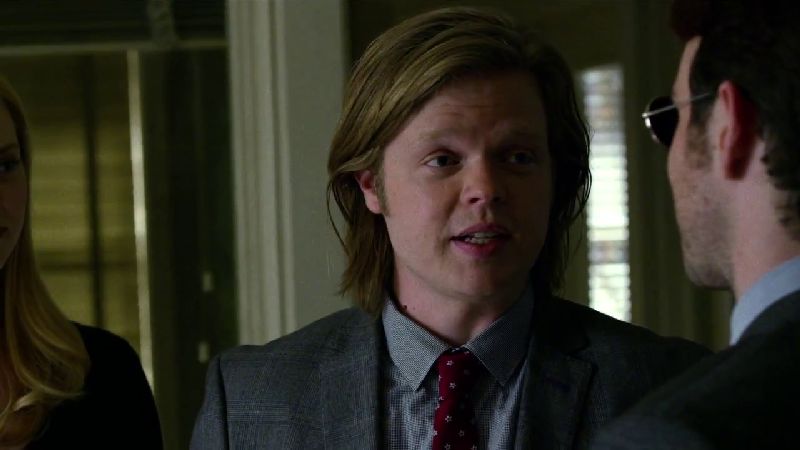 But the mood shifts again at the introduction of Karen Page (Deborah Ann Woll), the bloody knife in her hand, and the dead man before her. All of which she has no recollection. Naturally, she is brought in as the main suspect, so Foggy and Matt agree to take on her case for free, but only after Matt puts her through his own version of a lie detector test. This is one of the parts I enjoy about the show. Usually when a character uses such a power, like Matt’s enhanced hearing, the show borders on cheesy or unrealistic. Sometimes it even halts the experience all together. Instead, Daredevil continues the story, only gently increasing Karen’s heartbeat and we listen along with Matt. Karen doesn’t stop talking, there isn’t a strange overlay to drive home the “power” point. It’s just sound as Matt hears it.

Matt and Foggy soon realize that Karen isn’t just being framed for murder and she is embroiled in a money scheme that traverses deep into the seediest parts of Hell’s Kitchen. This is the part executive Jeph Loeb was talking about earlier. You see much of the legal process, the search for evidence, the slow climb to revealing the guilty party. However, there isn’t a case shift each episode. One ties into another and then again and again. It’s a string of crime dramas that–I assume–culminate in the final episode. Karen’s case is only the groundwork, an introduction to Fisk’s underlings and his ever creepy right hand man, Wesley.

I don’t have much in the way of complaints for this first episode. The fight scenes are engrossing, each of the actors solid in their way, the colors and sound are so good that I’m a bit sad I’ve never noticed such things in other shows. Matt Murdock as a character is so much more intriguing than any of the other superheroes Marvel has introduced. There are so many conflicts in his nature that I cannot begin to list them here. But one I will discuss is his mortality. Even in the first episode, Daredevil as a hero is fallible. He tires and doesn’t knock out the enemies with one hit or kick. He bleeds, a lot, and his injuries have an effect and aren’t just magically healed in a few hours. In fact, the only thing that really differentiates him from the baddies he fights is that Murdock ability to take a hit and get back up. 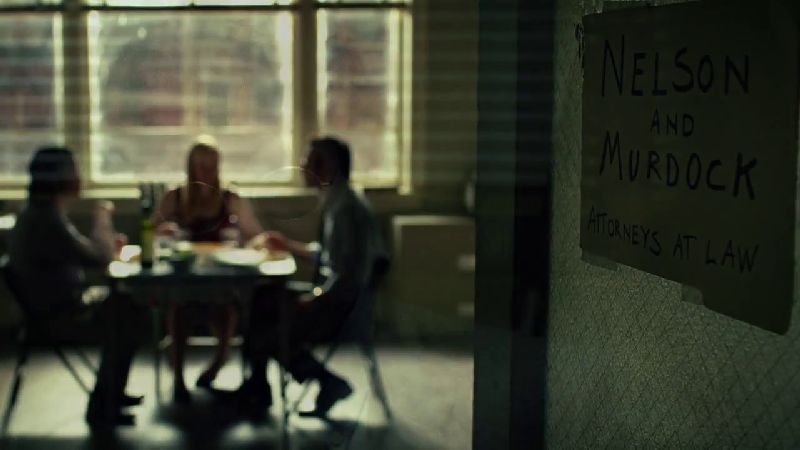 By the end of the episode, Karen is relatively safe, resolved in a similar way to any other television procedural, but you know that behind that sweet image of the trio eating lasagna lurks an evil we have yet see. An evil whose name we aren’t allowed to speak.

How daring is it? Not as daring as some of the later episodes. Actually, this first episode may be the most tame I’ve seen in the series and that’s saying a lot. But don’t think that means it’s a quiet 50-minutes by any stretch.

How devilish is it? The final two minutes of the show are my favorite in the series thus far. You never really notice the music in the show but when you do, it’s powerful. A simple, repetitive melody sets the tone for the dichotomy between Matt Murdock training with a punching bag and the evils he’s unaware he will eventually face. It’s haunting and exhilarating all at once.

Marvel’s Daredevil airs on April 10th and you can watch the entire 13-episode season at once on Netflix.