The first five episodes of Marvel’s Daredevil were provided by Netflix for review.

While flipping through the pages of your favorite comic book, it is easy to forget how brutal the world of superheroes truly can be, especially for the street-level heroes. Up to this point, the Marvel Cinematic Universe has been saturated with superhuman powers, Iron Man suits, and villains who seek to conquer or destroy worlds.

This led me to be skeptical about whether or not Marvel’s Daredevil would be able to take what made their super-powered Cinematic Universe so popular and adapt it to their human heroes. How big of a threat could Wilson Fisk be when compared to Ronan, Loki, or any of the other MCU villains? What makes Matthew Murdock, a lawyer from Hell’s Kitchen, so special?

After watching the first five episodes, I can safely say that Marvel’s Daredevil transcends the current offering of comic book shows on television, redefining the genre as we know it.

Set in Hell’s Kitchen in New York City, Daredevil finds a city still on the mend two years after the Chitauri invasion that occurred near the end of Avengers. With nearly half the city destroyed during the attack, the world opened its arms to aid in the recovery, but not everyone has had the city’s best interest at heart. Backroom deals and corporate greed has transformed Hell’s Kitchen into a hive of criminal activity.

“I’m glad to hear that there is some new blood running around out there. Heroes and their consequences are why we have our current opportunities.” 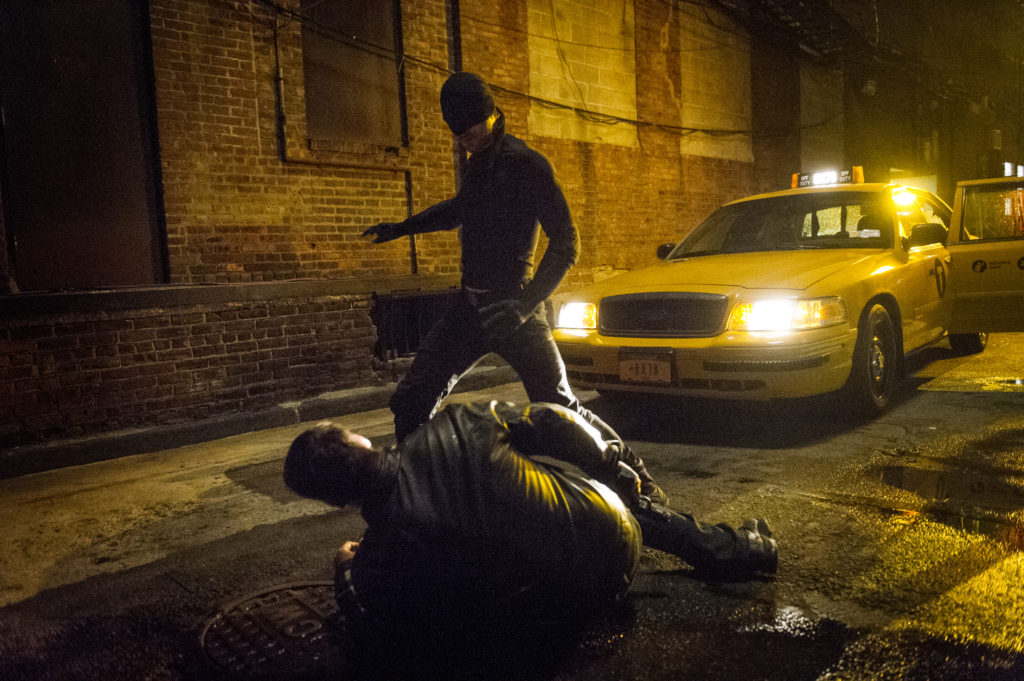 Matthew Murdock (Charlie Cox), a lawyer blinded due to a chemical spill as a child, has taken it upon himself to protect the city he’s grown up in. Donning a black face mask, Murdock takes to the streets to deliver the most ruthless justice the Marvel Cinematic Universe has seen. Only don’t call him Daredevil just yet. Society has dubbed him as “Black Mask” for the time being. He may not have the name we recognize, but he certainly has the fight.

The beautifully crafted action sequences are a joy to watch as they bring the brutality of the comics to life. Any time a gun appears, it’s a reminder of Murdock’s mortality. There is an actual risk of physical harm for being a vigilante and Daredevil does not skimp away from it. I lost count of how many times I’ve flinched at the sight of broken bones or savage beat downs both given and received.

Let me just add that Daredevil is a very violent and, at times, a gory show. Even though the series lacks cursing (very rare if memory serves me right), and nudity (though there is one incident of side-boob), it does depict stabbings, torture, and decapitations. I’d think twice before letting the young ones watch with you.

An excellent fighter, to be sure, but Murdock is still a blind man. However, his lack of sight has led to his other senses becoming enhanced. He can hone in on sound as well as feel shifts in the air around him. Nevertheless, fans expecting to see the hero’s red “vision” during action sequences will be slightly disappointed as only one glimpse is offered in a brief moment during the fifth episode.

Fighting crime isn’t the only way Murdock delivers justice. Fresh off passing the BAR exam, Murdock is joined by Foggy Nelson and together they open a law office in Hell’s Kitchen. Their first case introduces them to Karen Page (Deborah Ann Woll) who’s been framed for the murder of her co-worker. Don’t expect a case-of-the-week show when it comes to the cases tackled by Nelson & Murdock. Every job taken by the law firm is tied into the main narrative in one way or another. 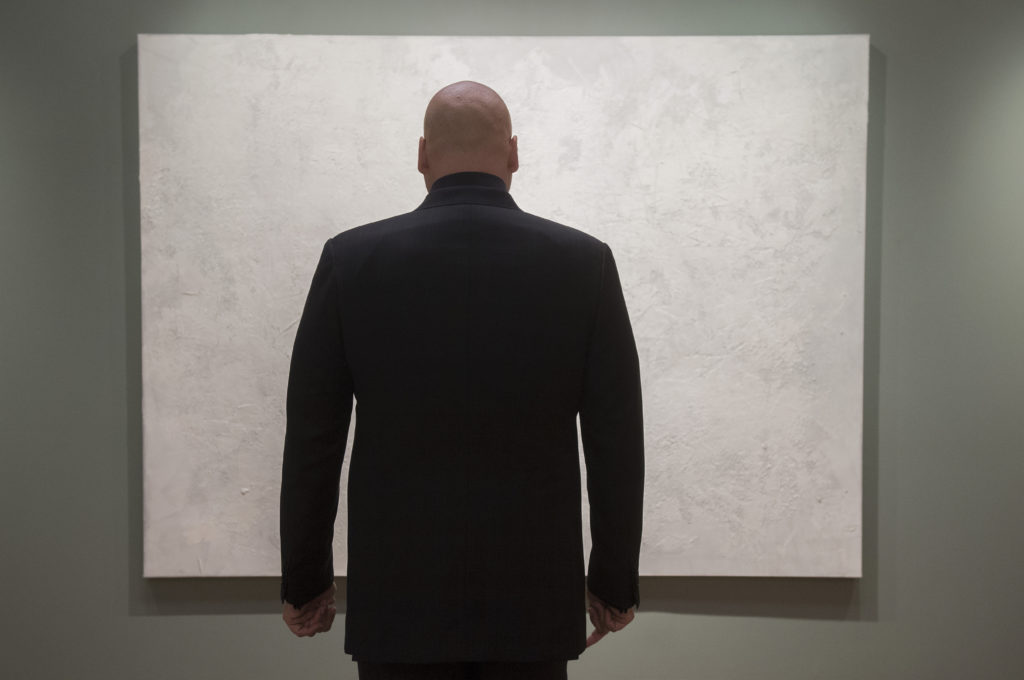 The acting is fantastic all around. Every single character delivers in their role. Charlie Cox is both heroic and sadistic as a lawyer by day and a vigilante by night. Watching Cox and Rosario Dawson together on-screen together is a treat as Dawson’s character, Claire Temple, aids Murdock with medical attention for his wounds. Elden Henson and Deborah Ann Woll bring the much-needed levity when the series starts to feel dark and heavy. Vondie Curtis-Hall was born to play Ben Urich and John Patrick Hayden delivers one hell of performance as Jack Murdock that will likely leave a few people in tears.

However great these actors may be, in my eyes they can’t compare to Toby Leonard Moore’s Wesley and Vincent D’Onofrio’s Wilson Fisk a.k.a. Kingpin. Watching Moore handle business as Fisk’s right hand man in a cool, collected manner is a blast. It’s hard to earn the trust of one of the most dangerous men in the Marvel Universe and Moore shows you just why he’s the man for the job.

D’Onofrio’s performance as Wilson Fisk is extraordinary, and by the end of the fourth episode, D’Onofrio cements himself as the only man for the role. He’s vulnerable with his love interest Vanessa (played by Ayelet Zurer), but when it comes down to business D’Onofrio’s Fisk is one of the most malicious villains in the MCU, and without a doubt in my mind, also the most compelling.

I can’t sing Marvel’s Daredevil’s praises enough. Visually the series is beautiful. The writing is smart, sharp, and leaves you on the edge of your seat. Fans looking for action will find the best choreographed sequences the MCU has seen to date –  as well as the most ferocious. By capturing the human element, Marvel’s Daredevil proves you don’t need to be super-powered to be a superhero.

Previous article
‘AGENTS OF SHIELD’ Recap: “One Door Closes”
Next article
A Look Back: Fast Five (2011)