Louie kicks off its fifth season with some good old-fashioned social anxiety. Last season was perhaps the boldest and most personal one yet, with long multi-episode story arcs that touched on his past, his daughters, and his relationships with Amia and Pamela. “Potluck” doesn’t contain nearly the same scope or gravitas, but Louie doesn’t always start each season with a flashy premiere. Instead, we’re treated to a nightmare scenario for the antisocial (or anyone, really) as Louie attends a parents’ potluck in an attempt to get out more. It’s a hilariously uncomfortable and painfully relatable premiere to one of the best comedies on television.

While Louie has employed surrealism in the past, I think its greatest strength is its depiction of the absurdity already present in everyday life. While often contrived in its comic extremes, Louie’s suffering is eminently relatable due to the mundanity of it all. Louie’s therapist falls asleep as he tries to articulate the existential rut in which he currently finds himself, and his only reaction is reflexive disgust: “Oh my god… I’m a boring asshole now!” This isn’t a new revelation (his doctor/neighbor last season told him the same thing), but it’s a universal fear that we all resist, deny, or try to forget. Without any help from the therapist, Louie takes it upon himself to escape his ennui, and invites himself to the parents’ potluck he normally avoids. 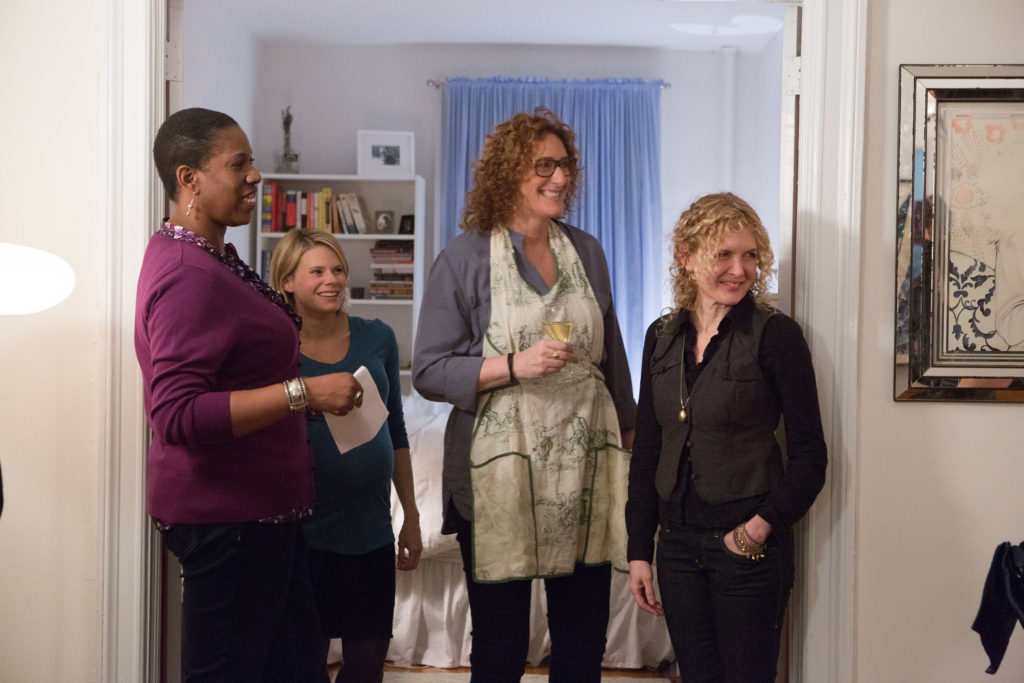 If “Potluck” has any overall theme, it’s probably this: genuine human connection is nearly impossible to find, and Louie’s continually punished for trying. Indeed, Louie stumbles his way through one awkward situation after another–first attending another potluck at the wrong apartment held by a new age spiritual group, and later drifting through a series of uncomfortable encounters with the other parents when he finally arrives at the correct party. The one person with whom he forges a somewhat meaningful connection is a surrogate mother who ends up going into labor when they attempt to have sex.

“Potluck” touches upon all the ways we’re connected and disconnected (mostly the latter) from one another. Louie finds himself excluded or otherwise turned off by every attempt to bond, whether it’s over spirituality, parenting, or with another awkward loner who shares his appreciation for fried chicken. The two parties he attends are shot in the same way, and he finds himself equally alienated in both. The most striking example of this fundamental disconnect between people is Julianne (Celia Keenan-Bolger), the surrogate mother for Marina (Judy Gold), the overbearing and obnoxious host of the potluck. She’s introduced to the conversation but barely gets a word in edgewise, and it’s clear that she’s treated as more of a vessel for surrogacy than a human being. The juxtaposition of the quintessentially human act of giving life and her complete dehumanization and lack of emotional support is the episode’s strongest and most cynical answer to Louie’s attempts to be more social.

It wouldn’t be an episode of Louie if all these quotidian tragedies didn’t escalate to a horrifically uncomfortable comic extreme, and “Potluck” does not disappoint. After sharing an Uber ride home, Louie offers the emotionally distraught Julianne some much-needed compassion and support, and the brief bond they forge turns into some hasty sex in the hallway. Unfortunately, her water breaks almost immediately, and the episode ends at the hospital as she goes into labor. There’s a small, karmic silver lining here: the unexpected delivery completely ruins the elaborate birthing plan Marina had laid out. She delivers the episode’s best line as she berates Louie for ruining everything: “Do you know how hard we tried to have this baby in our way, and then you went and jizzed all over his face!?”  Welcome back, Louie.