This episode focuses on two things – well, actually, make that one thing: pain in its physical and emotional forms.

Like Matt’s confession in “Into the Ring”, “Cut Man” uses his injuries as a means to transition from the present to past. The confession, in which he reminisced about his father, provided clarity to the scene that preceded it, as it was the last time Matt saw his father. Similarly, this episode uses his injuries to bookend scenes which showcase key moments to understanding what molded Matt into the man we see becoming Daredevil. 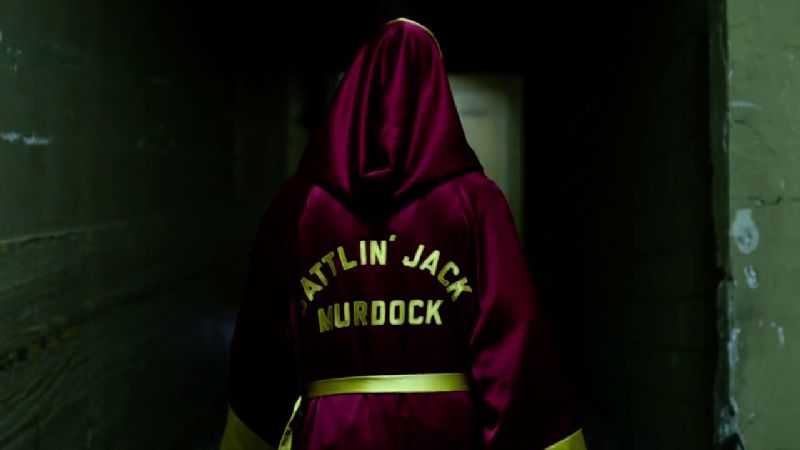 In these flashbacks, his father is the constant. Skylar Gaertner and John Patrick Hayden do fantastic jobs creating a lovable bond between young Matt Murdock and his father, Jack. Their relationship isn’t overly saccharine, as tender bonding moments are balanced with routine surgeries. Additionally, without spending an inordinate amount of time on the issue, we’re made aware of Matt’s elevated hearing. A lost fight, mixed with a stack of cash and Jack’s disgust at the money, gives us more than enough information to realize he took a dive. At Fogwell’s gym, Jack’s conversation with Sully is relatively cordial, belying the threats laced within. Those who are familiar with Daredevil’s story, knew what these flashbacks were leading up to. Despite knowing the outcome, I was impressed by the death scene’s ability to elicit an emotion – something I don’t remember feeling in regards to the Waynes’ murder (to borrow from a similar alley death scene). As a whole, I find the flashback scenes help me understand Matt’s motivation in the present. The hate and anger he harbors about injustice is connected to his childhood. As a kid, he heard two mobsters telling his dad to throw a fight, his dad defies their wishes, and winds up dead.

As the flashbacks establish his character, the crux of the episode occurs in Claire’s apartment as she patches up Matt’s injuries–sustained from an unseen ambush the Russian’s staged in-between “Into the Ring” and the start of this episode. These scenes in her apartment further our understanding of his enhanced abilities while highlighting his mortality and tolerance to endure injury–an issue we rarely see in comic book fare. The consequences of what happens when Matt doesn’t perform at his very best immediately raises the stakes for the rest of the series. When they’re on Claire’s roof we see to what extent Matt will get his hands dirty. He possesses a moral line Frank Castle would cross, but he’ll also push you off a building without the courtesy of having Sam Wilson bring you back up.

For a change of pace between the flashbacks and events taking place at Claire’s apartment, we see Foggy comforting and flirting with Karen. These moments are necessary, to catch our collective breath, but I’m still on the fence about Elden Henson’s portrayal of Foggy. No doubt he brings a level of sincerity to the character’s heart, but at times his comedic delivery is grating. The best thing I can say is that my sentiment toward Elden is gentler than the feeling I have towards his illustrated counterpart. 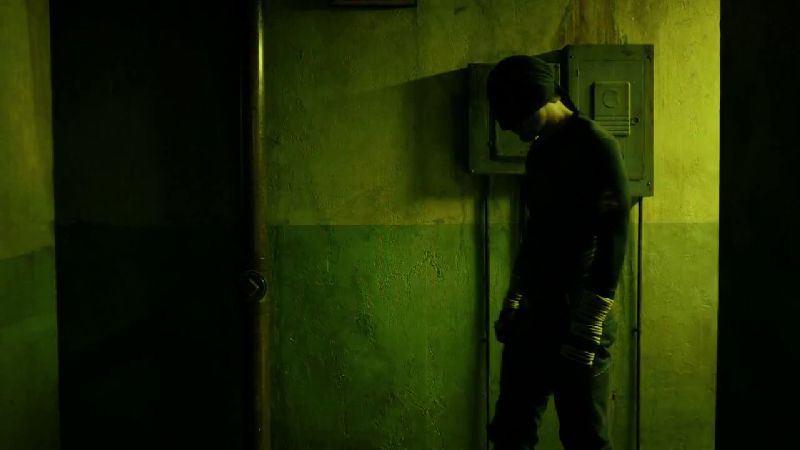 True to form, this episode ends with a bang. Initially, I thought it was going to cut to the credits when Matt kicked in the first door, but boy, was I wrong. The kidnapped boy’s “Daddy” cry parallels the preceding scene where Matt discovers his own father. This memory sends him in a blind (sorry, I had to) rage, giving way to a fight scene that is executed with both authenticity and technical prowess, that leaves me slightly baffled. (Is it a steadicam? But, there’s that broken door. Is it a crane rig? But, I can see the ceiling. Most likely a blending of the two with some hidden cuts.) Either way, the scene is great, and lazy critics will compare it to Park Chan-wook’s “Oldboy”….and I will too! They both occur in (seemingly) one take and in keeping with the series’ grounded tone, as Matt hits his opponents, they don’t immediately go down. It also further typifies Claire’s comment about the amount of pain Matt can endure; something I’m sure we’ll see a lot more of.