Don’t let your kids watch this series. This is not Captain America; this is not Starlord; this is not The Avengers. There is no good guy here. In those movies, there is good and evil. Good is exceptional, and the evil is fantastical. They talk about saving worlds, millions of lives, and even the universe. Loki is the big baddie in so many of Marvel’s movies, but he’s charming, witty, and theirs is a bit of incredulity to his evil.

The evil in Daredevil is not so unbelievable. Evil is rape, murder, child prostitution. This evil is made more real because we hear about horrors such as these day in and day out. The third episode of Marvel’s Daredevil opens on a brutal murder of a Russian crime boss in a bowling alley. There is an amusing bit on the reliance of new guns intercut between the gory and grisly execution of Prohaska, who is killed by a professional criminal named Mr. Healy to give his underworld empire to the Russian brothers under the guise of Veles taxi. The horrified shoe rental girl who returns to see the carnage at the alley calls the cops, only to have the murderer willingly give himself up to the police, setting up the entire episode.

We return to see Matt Murdock exhausted and somewhat defeated resting on a bench outside the church where he gave his confession in the first episode. The priest recognizes him as Jack Murdock’s son, and tries to get him to open up, saying that what is said in confession stays between them. Murdock questions the fairness behind this, and the morality of that silence. The line between justice and the rules is a theme that runs continuously through this episode, which is part of the strength of this hour. 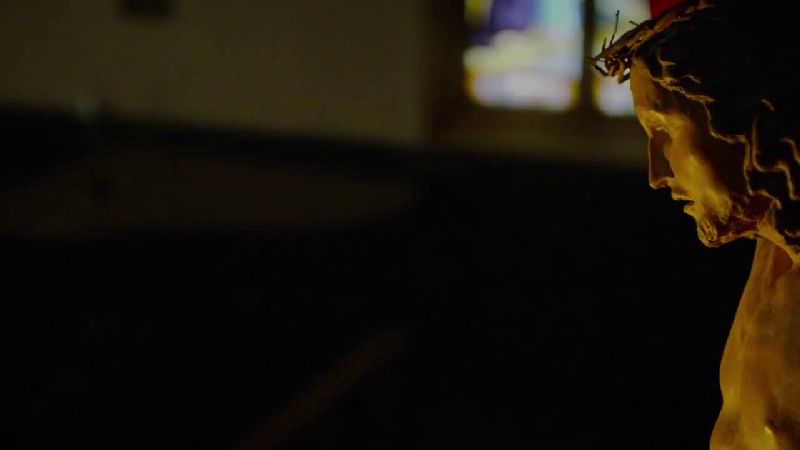 Ben Urich is an interesting character. He’s at the fringe of the main plot but he always seems to be tugging at the right strings. He meets up with an old mob contact of his, and they discuss the old days, and what it meant decades ago to run crime in New York City. The old mob boss laments about the passing of decorum and codes. Urich knows something’s up, and his contact tells him to run, to give it up, because there is nothing but blood in the ledger. That feeling of dread, the presence of ‘him’ looms over the entire series. ‘He’ is everywhere without even having been in a single shot of the series so far.

The scenes in Nelson & Murdock are among my favorites in the series. The chemistry between Foggy, Matt, and Karen is palpable and it feels like there is a real camaraderie between them. However, I sincerely hope that they don’t make this a love triangle as Foggy is integral to Matt. Foggy is Matt’s conscience in many ways, and I hope they use that as a foundation for the series.  Also, I dislike Karen Page in the comics, so making her likable on screen is no small feat.

The deceptively charming Wesley then stops by for a visit, representing Confederated Global Investments, and Foggy subsequently bumbles and blusters his way through their meeting, distracted by the dollar signs on the offered check. Matt, nonplussed, seeks to get to the bottom of who this man is and more importantly, who he is representing. Anyone can see that Wesley is not on the level, but the way that he does it, it feels like he’s a serpent wearing human skin, with a smile plastered on his face. Later, at the precinct, Foggy is visibly disturbed and shaken by Healy, who is blatantly using the technicalities of the judicial system to get away with premeditated murder. As Foggy is about to walk out, Matt swoops in and commits the firm to take the case, wanting to use Healy to gain insight on what’s to come to Hell’s Kitchen, despite Foggy’s pleas otherwise.

In another part of Hell’s Kitchen, Ben Urich is being told to stop his investigative reporting on the mob and focus on fluff pieces to drive up circulation. He laments this, but ultimately accepts, because his wife is in need of heavy hospital care and his job is the only way to pay for it. Later on in the episode, Karen is given, what is essentially, a legal bribe to keep quiet on the Union Allied affairs. Unable to soothe her conscience, she seeks out Daniel Fisher’s widow for closure, but finds none. Ultimately, she finds herself heading to Ben Urich for help.

The rest of the episode plays out like Law & Order: Hell’s Kitchen. When it comes to Daredevil, oftentimes the fact that Matt Murdock is a lawyer–and a damn good one–is overlooked. Seeing him in the courtroom and making an argument, albeit one that repulses him, shows off his acuity and legal knowledge. What he says about justice against the law is mirrored by the duality of his existence. Matt Murdock is ultimately an enforcer of justice, and he knows at times he is restricted by the law, therefore he willingly breaks it in order to right wrongs he cannot in the courtroom. As the lawyer, Matt learns the jury is being tampered with; as a masked vigilante, he beats enforcers into letting the blackmailed jurors go.

As the trial draws to a close, Matt predicts step by step what will happen and tells Foggy. There will be a hung jury, and the judge, somehow influenced, will not have the suspect tried again. Both Matt and Foggy know that perhaps the law was upheld, but justice was not served, something that Matt will remedy. As the court adjourns, Wesley assures Leland that everything will be fine, and that the reputation of Nelson & Murdock will be their shield.

Later that night, Matt tracks down Healy and the ensuing brawl is brutal. There is nothing super about Matt Murdock when he fights. He fights for his life, and every time, you wonder if he’s going to make it out whole. So far in the series, Healy is the most skilled fighter that he has ever dealt with, and the unrestrained, desperate nature of the fight shows that in spades. Matt, finally having the upper hand, gets two words out of Healy.

Upon uttering the words, Healy is broken, knowing that he not just only killed himself, but anyone that he’s ever cared about. Calling Murdock a coward for not killing him, he impales his head through the eye on a spiked fence. Maybe Matt Murdock was the lucky one for being blind because that image is forever burned in my memory. 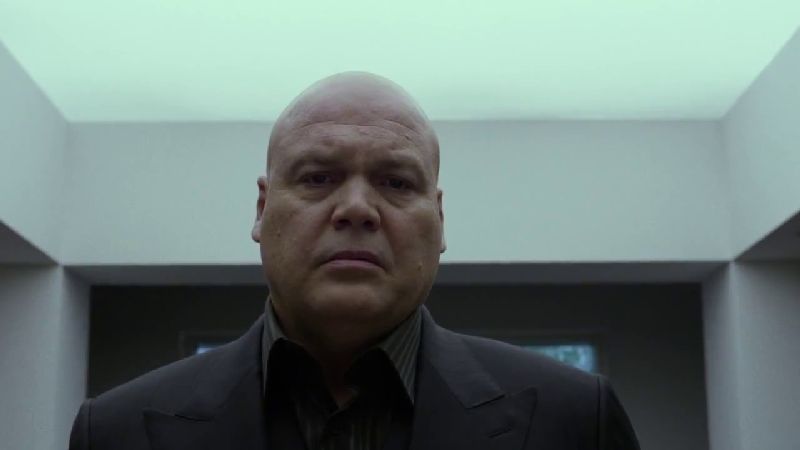 And then finally, we see ‘him’. He who shall not be named. Vincent D’onfrio owns this role. When he is in a scene, he is suddenly the only thing that matters, and everything else is nothing. We find him in an art gallery, staring at a painting, when the curator tells him what art should do to a man. We see his face for a total of seven seconds, but his hulking presence, clad all in black, splashed against the stark white that will be his trademark, defines this episode. In a few minutes, we realize that as much as this series is about Daredevil, this series is also about Wilson Fisk, a villain who commands, who controls, and who is more cruelly intelligent than any comic book villain we’ve ever seen on screen.

Any man who must say “I am the king” is no true king.

Wilson Fisk, needs to say no such thing.