I was being somewhat facetious when I said that The Walking Dead finale would just be a town hall meeting, but that turns out to have been mostly accurate. Even at an extended ninety minutes, “Conquer” doesn’t contain any of the calamity or spectacle one might have come to expect from a season finale–what we have instead is a series of largely isolated storylines that wouldn’t have felt out of place in the middle of the season. A meeting is held to decide what is to be done about Rick, Daryl and Aaron continue their search for more people to join Alexandria, Nicholas has a bone to pick with Glen, and Sasha and Gabriel entertain their own individual death wishes. It’s a bit of a scattered episode that lacks the grandiosity of previous finales, but it’s a suitable end to one of The Walking Dead’s strongest and most consistent seasons.

The major pivot point for this season was “Them,” an episode in which we finally see the return of optimism and hope after an entire season of grinding our characters into the dirt. “Conquer” is an affirmation of that new direction–despite building towards major conflicts both within and beyond the walls of Alexandria, everything doesn’t immediately and completely go to ruin. Alexandria hasn’t erupted into a warzone, the walls haven’t been overrun by zombies, and the now-confirmed Wolves haven’t yet descended upon the settlement. That isn’t to say that these things won’t still happen (they almost certainly will), but “Conquer” defers these predictable outcomes in favor of something relatively more positive. Rick and the people of Alexandria have finally reached some degree of mutual understanding without the need for an armed coup (though there are still some casualties), Glen is able to resist killing Nicholas even after getting shot, and the one and only Morgan saves Daryl and Aaron are saved from a sadistic trap set by the Wolves. That’s about as optimistic as a show like this gets. 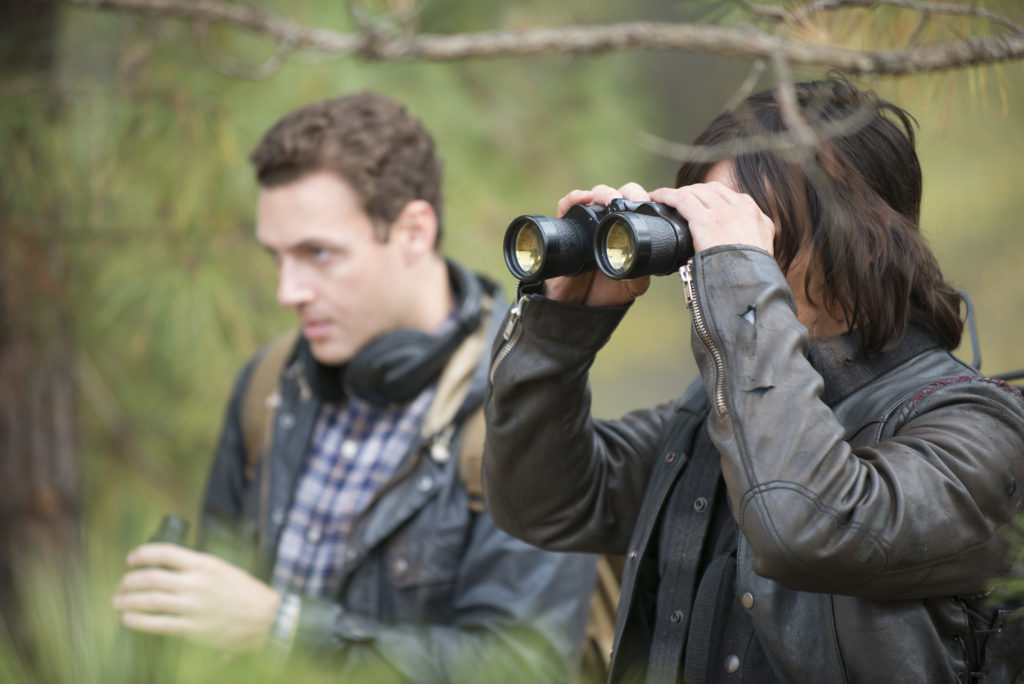 The episode’s extended length gives the storylines a little more room to breathe, but most of them aren’t very substantial on their own. Gabriel, the wettest of blankets, has reached a new low point in his crisis of faith and attempts to commit suicide, first by zombie and later by antagonizing Sasha. Sasha, meanwhile, has a deathwish of her own but chooses Gabriel of all people to confide in (I get that he’s the de facto priest, but the two of them share last place on the list of well-adjusted people from which to seek advice). Abraham and Eugene get a nice moment to finally talk and apologize to each other, but the rest of the episode is filled with various discussions in preparation for the meeting to deal with Rick. Unfortunately, the unconnected storylines don’t weave together particularly well into a satisfying climax for the finale. The tension in the third act draws primarily from Rick investigating a bloody trail leading in from Alexandria’s open and unattended gate, but Glen’s life or death struggle against Nicholas and Sasha’s fight with Gabriel proceed predictably and end unremarkably.

Following Pete’s inadvertent murder of Reg and his resulting execution, Deanna and the rest of the Alexandrians are finally on the same page as Rick. Morgan returns with Aaron and Daryl, but the Wolves have learned about Alexandria from the photos in the backpack Aaron leaves behind. Dealing with the Wolves and their particular brand of crazy will certainly be a major focus of next season, but The Walking Dead has always stumbled when the cast of survivors grows too large. Reg tells Maggie that “civilization starts when we stop running,” but it was the running that gave us the leaner, hungrier episodes that made this season so compelling. “Civilization” largely amounts to a bunch of people sitting around disagreeing with each other, and one only needs to look back to the show’s earlier seasons (or even Tyreese’s death) to see how interesting that can be.