‘The Walking Dead’ Review: Them

We find our heroes running on fumes on the long road to DC, without any water and a group of zombies following not far behind. It’s a common sight for The Walking Dead, where so much centers on hope in the face of very literal reminders of death’s ubiquity and inevitability.  “Them” is largely an obligatory episode that provides a bit of breathing room after the overwhelming bleakness of the last few episodes (really, the past season or two). The prison was really the last time our had any tangible sense of hope or security; what we see now is a group at the breaking point, so defeated that even a glimmer hope is looked upon with suspicion.

The Walking Dead, by both design and necessity, returns frequently to the issue of perseverance in the face of hopelessness. “Them” follows a fairly standard template: despair, desperation, grieving, and the tantalizing glimpse of something better, daring the characters (and audience) to hope again. There are moments where the episode does this well, but there are also plenty of moments where characters still feel the need to state the obvious. The opening scenes are a good example of what I enjoy and find endlessly frustrating about The Walking Dead: Maggie, Sasha, and Daryl are on an expedition to find water in a series of shots that depict both their grief and the gravity of their situation without uttering a single word. Returning to the group, however, Maggie asks how much longer the group has, to which Sasha replies about sixty miles. After a weary pause, Maggie informs Sasha, “I wasn’t talking about that.”

We know, Maggie. We get it. 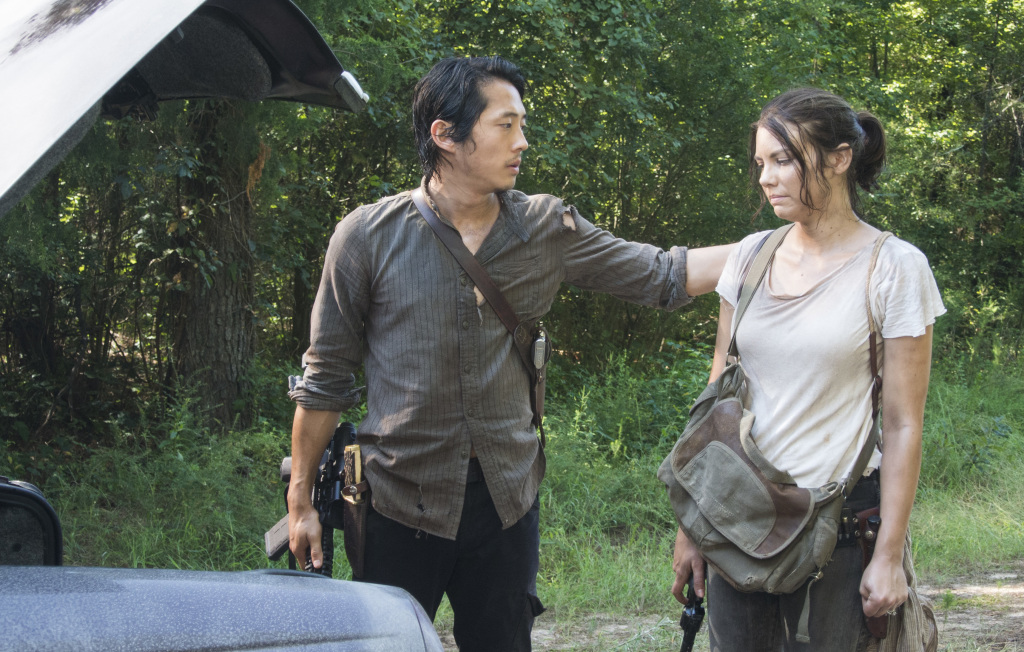 I would love to see a completely dialogue-free episode of The Walking Dead. The show has proven time and again that they are more than up to the task, but can’t seem to break away from the habit of filling the air with superfluous dialogue. The frequent juxtaposition of genuinely effective storytelling makes the unnecessary, labored lines all the more frustrating. Maggie’s discovery of a zombie bound and gagged in the trunk of a car was an effective scene that captured all of her sorrow and frustration, as well as the support she draws upon from Glenn. In contrast, the next zombie she discovers in the barn is paired with a pointless, tedious exchange with Carol. The zombie had a gun, and she could have shot herself, but she didn’t, because some people can’t give up. Just like our heroes!

I don’t recall whether this has come up yet in the series, and frankly I’d be amazed that it took this long, but Rick finally gets around to a “walking dead” speech. That is, a speech explaining the dual meaning behind “walking dead”, in case anyone hasn’t quite picked up on it yet. To be fair, it’s actually a pretty good speech and Andrew Lincoln delivers it well–I’m just being harsh because it’s a little ham handed and feels about five seasons too late. The following scene of the group holding the doors against the horde of zombies in the storm is similarly a bit corny and too literal, but is nicely shot and serves as a much needed emotional catharsis from all the despondency and melancholy.

More importantly though, the episode marks a turning point for the series–it ends with a bit of optimism. The group has learned some hard lessons about the danger of hope and nearly given up on thought of respite or security; even a sudden supply of water left by “a friend” is greeted with suspicion and ultimately goes untouched. Hope is a luxury the group is no longer sure it can afford, a notion that the world itself seems eager to confirm: the sweet relief of rain is quickly transformed into a menacing storm. But the storm eventually passes, taking out most of the walkers and sparing the barn. Maggie and Sasha step out to greet the sunrise, and are instead greeted by a suspiciously friendly face named Aaron requesting to speak with Rick.