With the season finale looming, The Walking Dead is quick to stoke the fires of conflict in Alexandria. Tensions are higher than ever following last week’s disastrous supply run; we find Rick running out of patience with the naive townsfolk as casualties and conflicting accounts on both sides blind everyone to a growing threat beyond the gates. While he tries to deal with the Jessie’s abusive husband Pete, others from Rick’s group cling to memories of life outside the walls, Daryl and Aaron discover more mutilated zombies with the letter “W” carved into their foreheads, and Carol bakes a passive-aggressive tuna casserole.

“Try” largely focuses on the connection Rick and his group still have to life before Alexandria. Some, like Glenn and Michonne, understand the need to stay within the community and make it work, while others continue to be wary of the complacency that security brings. Sasha remains isolated from the rest of the community–when she isn’t in the watchtower, she goes on solitary expeditions to hunt walkers in the woods. Even Carl, who has been following Enid as she climbs the walls and ventures into the forest, finds solace in roaming free in the wilderness.

Rick, however, continually sees the lines between life within and beyond the walls becoming blurred. To him, the rules of the world are simple and universal. He brings the news of Pete’s abuse of his family to Deanna, but it turns out that she already knows. When she refuses to consider execution, Rick decides to confront Pete himself, and the ensuing brawl spills into the street. It’s a bloody, visceral fight that finally stops after drawing the attention of the entire town. In his anger, Rick pulls a gun on the town and gives a speech that stops just shy of calling the Alexandrians “sheeple.” Berating them for their weakness and timidity, he seems ready to declare a hostile takeover when Michonne finally knocks him unconscious. 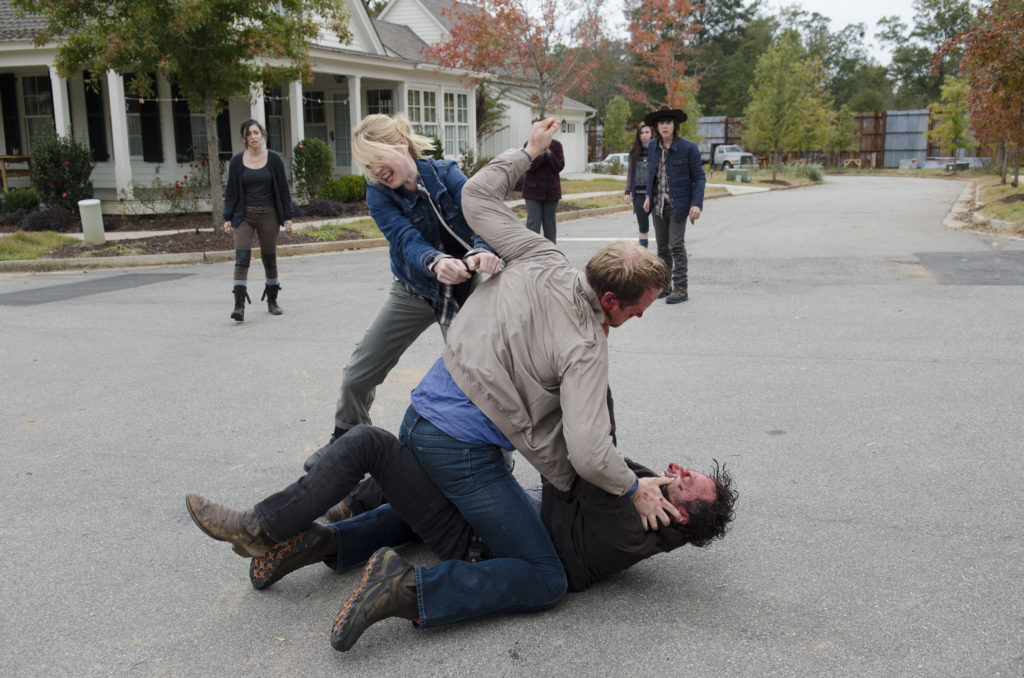 It’s still surprisingly difficult to get a good read on Deanna’s thoughts and motivations. A former politician and semi-professional poker player, she absorbs more information than she reveals and claims to possess a talent for reading people. Unfortunately, her interactions thus far haven’t provided any evidence to suggest she’s particularly skilled at anything. She was nothing but optimistic and welcoming at first, but Gabriel’s warning and Aiden’s death have driven her predictably towards a less favorable opinion of Rick and the other newcomers. Still, there are moments that hint at her having a wiser, more measured understanding of the situation. After Nicholas provides her a more self-serving account of the supply run and blames Glenn for Aiden’s death, she gravely reminds him, “You don’t know what I see, Nicholas… And I see a great deal.” However, the rest of the episode is filled with a much more predictable mistrust and hostility towards Rick, so it still remains to be seen whether she’s as naive and impulsive as the rest of the townsfolk.

“Try” isn’t the most thrilling lead up to next week’s finale–from the looks of it, we’re mostly just in for a town hall meeting. It’s an episode that mostly coasts from last week’s inertia, and doesn’t do much to raise the stakes for the conflict we all already know is coming. Rick’s interactions with Jessie were more awkward than they needed to be, and Carl’s slow motion romp through the forest added a bit of unintentional comedy. Still, there’s the looming threat of the group behind the zombie mutilations, and it turns out that Nicholas is in possession of Chekhov’s blender gun, so there are plenty of ways that everything can (and invariably will) go wrong.