‘The Walking Dead’ Review: Do Not Enter Revolving Doors

How lucky are the citizens of Alexandria that they’ve managed to survive this long? The Walking Dead doesn’t always have particularly subtle writing, but “Spend” contains a comic display of incompetence from the clumsy, cowardly Alexandrians. It’s no surprise that Rick and his group are quickly assuming positions of power within Alexandria (a fact that hasn’t gone unnoticed by Deanna), but it’s a wonder that the entire community hasn’t collapsed in on itself already. Nevertheless, things are escalating quickly as the show prepares itself for a showdown between Rick’s group and the locals. It’s a thrilling but inconsistent episode that delivers plenty of gory action to make up for its largely obligatory plotting.

Zombies aren’t really a big threat to our heroes anymore. That’s the way it should be, but it also means that we don’t see things go as horribly wrong as they do tonight unless there’s some clumsy idiot to panic and ruin everything. The Walking Dead strains a little too hard trying to highlight the skill gap between Rick’s survivors and the locals; the incompetence and cowardice on display borders on slapstick. Aiden Monroe and Nicholas are joined by Glenn, Tara, Noah, and Eugene on an ill-fated supply run for parts to fix Alexandria’s malfunctioning power grid. Things quickly go from bad to worse as Aiden accidentally shoots a grenade on a zombie’s military vest–the explosion leaves Aiden impaled on some debris and Tara unconscious from a traumatic head injury. In the ensuing chaos, Nicholas’ desperate panic leads to the gruesome deaths of both Aiden and Noah. Even Eugene, who spends much of the mission reminding everyone of his cowardice, steps up to the plate and does his part to get the others out alive. It’s another small triumph for his character, albeit a little ham-handed. 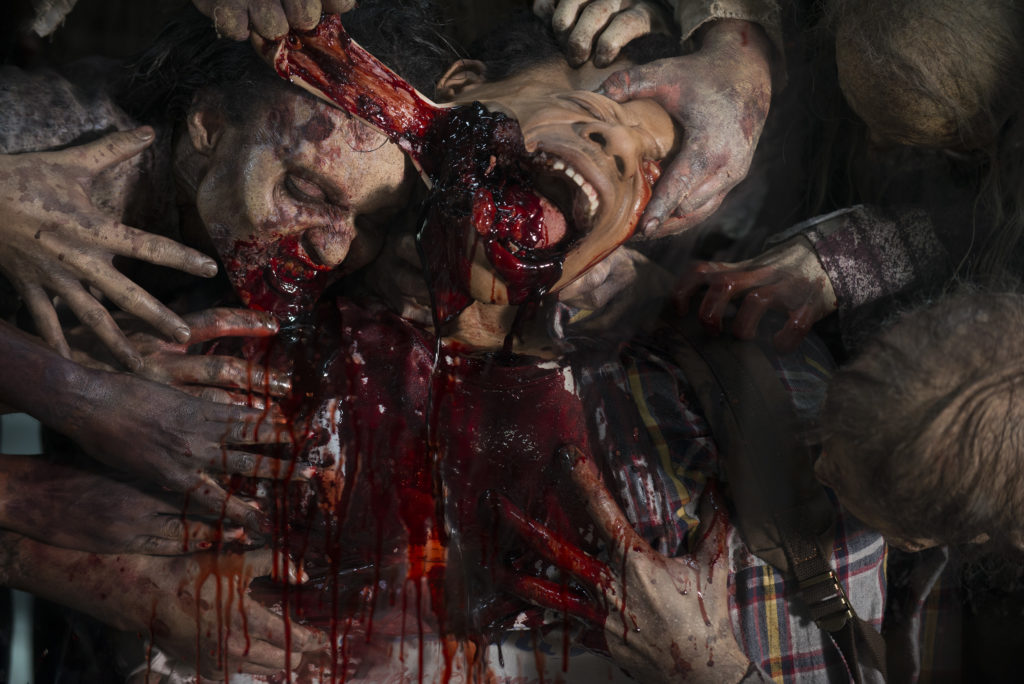 In a similar but far less disastrous vein, Abraham finds himself at the head of Alexandria’s construction crew after he rescues a lookout named Francine from zombies while the rest of the crewmen scatter like field mice. It’s a nice victory for Abraham, who has been searching for purpose after Eugene’s alleged cure fell apart. No one dies, the crewmen eagerly rally behind him, and even the previous foreman Tobin is all too willing to officially resign his post. Apparently abandoning your friends at the first sign of danger is just standard procedure for the citizens of Alexandria; they’re just a town full of Shaggys and Scoobys waiting desperately for a Fred to lead them.

Deanna Monroe is well aware that Rick and the rest of the survivors are quickly supplanting the locals in positions of power. However, she’s given more to think about when Gabriel appears to warn her about trusting the new arrivals. Gabriel’s crisis of faith is still ongoing, but not in any particularly interesting or compelling way. His tortured conscience is projecting his own guilt onto Rick and the others, and in doing so, plants the seeds of doubt into Deanna’s mind. Deanna herself is still somewhat convincing as a wise and cautious leader, but we haven’t seen much beyond her trust and idealism in welcoming Rick and his people. Her character still has potential, however–it’ll be interesting to see how she reacts to Gabriel’s warning (particularly in light of Aiden’s death), and whether she had any contingency plans in place for when the situation with Rick’s group deteriorates.

To further complicate things, Carol finds herself reluctantly bonding with Jessie’s son Sam, who is still on the hunt for some cookies. Despite being a big bully, Carol teaches Sam how to bake his own cookies, and in the process stumbles upon the revelation that Sam’s father Pete is an abusive drunk. After paying Pete a visit to confirm her suspicions, she informs Rick of her discovery. In Carol’s eyes, the situation is fairly clear cut: “I know how this is going to go with Pete–there’s only one way this can go. You’re gonna have to kill him.”

“Spend” is another busy episode that succeeds largely from its action and forward momentum. We haven’t seen action or gore like this in a long time–Rick’s group has gotten so good at surviving that they don’t really find themselves getting trapped in revolving doors anymore. Both the warehouse supply run and Abraham’s single handed zombie massacre were a lot of fun to watch, but unfortunately the characterization and plotting in the rest of the episode aren’t particularly compelling. The comic levels of ineptitude are a little too distracting–our heroes are hurtling inexorably towards a major conflict with the citizens of Alexandria, but from what we’ve seen so far, the fight seems like it’ll be pretty one-sided.