This week on The Fosters, Rita’s daughter shows up, Callie’s adoption is in jeopardy (yet again), and yet, Brandon tries to make everything about himself.

“Daughters” begins with Callie helping Rita get ready for a hot new date. Rita has kindly offered to house Callie while the whole Brandon/Callie romance is under investigation. While Rita is out a girl named Chloe comes a knocking. Callie lets this stranger right on in because the girl claims to be Rita’s daughter. Callie, I thought you had more common sense than that. Just because this girl says she is Rita’s daughter doesn’t mean she is. She could have been a psycho serial killer for all you know. Unfortunately for everyone, Chloe is telling the truth, and she is indeed Rita’s daughter.

When Rita gets home Chloe asks her mom for money to invest in a food truck, even though she has no cooking or management experience. Apparently this is not the first time she has come home asking for a handout. Chloe storms off, and Rita explains to Callie that Chloe is bipolar and then finds that Chloe has stolen a check. Chloe comes by the next day to yell at Rita for cancelling the check that she stole and the two begin to argue. Chloe accuses Rita for causing her father’s suicide and this hits Rita’s last nerve, who responds by slapping her daughter. 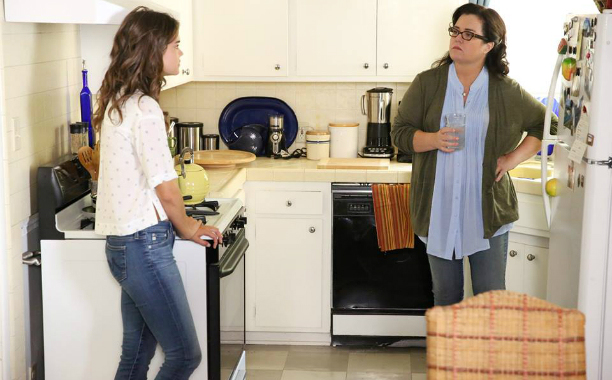 The next day, Rita and Callie stop by Girls United, and Callie is also introduced to the new girl living in the house, Brooke. Brooke causes a fight as soon as she walks into the room by calling everyone skanks. This girl is obviously going to be trouble. Brooke and Carmen get into a screaming match later, and when Rita goes to break it up, Carmen gets punched in the face. When making their statements to the police, both Carmen and Brooke claim that it was Rita who punched Carmen, and Rita is cuffed and arrested. This really makes no sense to me, I am really confused about why Carmen and Brooke would team up on this. Does Brooke have something on Carmen that she is holding over her head? I am really confused and the girls stick to their story.

Over at the Adams-Foster’s house, things are not quite so peachy keen either. During dinner Jude refers to the judge presiding over Callie’s case as that “idiot judge” (that’s pretty much as rebellious as we have ever seen Jude)  and Mariana asks her mom what the cops are going to do about the douche who sold her and Callie a stolen car. Mariana is pissed that she is now out 1,400 dollars, but Brandon has some sage wisdom to bestow upon his younger sister:

B: Well you deserve it if you ask me
Mariana: Well I didn’t ask you, and now you have to share your car with us so you lose too.

Finally, I am starting to like Mariana this season.

Later, Brandon comes into the kitchen asking Stef how long AJ will be staying at the house. She tells him that she knows that the two boys have their differences , but AJ has had tough life so you know be a little sympathetic to his struggles. B is too self absorbed to comprehend that comment, so he changes the subject to the surveillance video Stef is reviewing and gives Stef a new lead on the her case.

After dinner, Brandon and AJ are in the bathroom together, washing up for bedtime, and it as awkward as it sounds. AJ, jokingly, asks B if Stef and Lena placed a restraining order on him because he stalked Callie. Brandon snaps and yells at AJ that it is none of his beeswax. Mariana walks in before tensions get too high, and she calls Brandon out on his shit. Seriously, Mariana is on a roll tonight. Brandon tells Mariana that everything is fine, and verifies about 100 times that he is no longer in love with Callie, but then accidentally lets it slip that he and Callie made out after GU fundraiser. Ruh rooh.

Meanwhile Lena and Stef are in their room trying to figure out how they got themselves in this mess AGAIN! They never imagined they would have to deal with Callie making out with another foster sibling, especially since they thought that they sent the only other candidate for that role off to Wrestling boarding school. 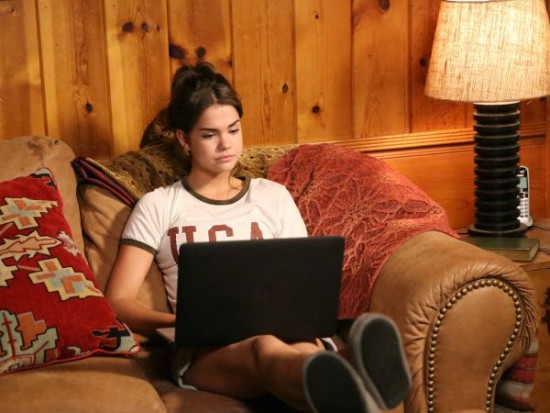 And then comes the social worker scene. She is at the house to interview Callie and Brandon individually to find out “what transpired” between the pair to result in a restraining order. The two do a horrible job of keeping their stories straight, and they keep giving different accounts of pretty important details (ie. if their first kiss happened before or after Stef and Lena asked to adopt Callie). I was half expecting Brandon to storm out in the middle of the interview screaming “BUT WHAT ABOUT ME.” Don’t worry, that is basically what he does in the next scene to Stef and Lena.

When Brandon finds out that AJ kissed Callie, he flips a shit. A huge shit. He starts screaming at his moms that nobody ever cares how he feels. He complains about how it is unfair that he had to endure a restraining order while AJ gets away scot-free. He yells about how “Good Old Brandon” is always expected to do the right thing (I can safely say, I never assumed that). The he starts to attack his moms personally. He knows that Stef and Lena are in therapy and accuses his moms of bringing in ‘stray kids’ because they can’t stand the thought of being alone together. Yes, Brandon actually called his brothers and sisters ‘stray kids,’  and Jude overhears the entire fight.

The next day, Jude has to take a summer school math test, but he can’t focus on anything other than the turmoil at home. Even the sight of Connor, whose face lights up as soon as he spots Jude, is unable to assuage Jude’s anxiety. As soon as the test starts, Jude is sketchily looking around at everyone around him. I actually got scared thinking that Jude was going to get caught for cheating, but instead busts out of the classroom and storms past Lena’s office. When Lena stops him to see what is up, he retorts with

“Why do I need to care about anything when Callie’s back in the system and you and Jude are getting a divorce.”

Brandon arrives home shortly after Jude does. When he finds out Jude had a rough day, he put his hand on Jude’s shoulder and say “Sorry to hear that bud” and walks up to his room. This prompts Stef to go upstairs and commend Brandon on his super sweet and caring comment to his brother. Wait what? Literally, all he did was say “sorry bro” and then peace out. I am so confused. Anyway, Stef tells him that she realizes that she has more compassion for her adopted kids than she does Brandon because Brandon hasn’t suffered as much as they have and it is not fair for her to think that. Um no Stef, it is completely fair to think that. She apologizes for being preoccupied with making sure Callie was alive and safe instead of consoling Brandon’s broken heart. She then tells Brandon that she will support him if he does not want Mike to foster AJ.

Later that night, Jude walks by Mariana’s room and hears Callie’s voice. He is disappointed to find that the voice was coming from Mariana’s computer, and Callie wasn’t actually back home. The two sit down and watch the video that Callie had uploaded to her new app. In the video Callie recounts all of the cruelties and injustices she and Jude had to face while in the foster system, and how the individuals who committed these acts never had to pay any consequences.

The fact that the writers of The Fosters ended an episode where Stef tells Brandon he suffered just the same as his adopted siblings with Callie listing out the horrible things that she endured while in the foster system is mind-blowing. Lucy Hallowell summed it up best with this tweet:

.@tvwithapb Biggest joke on the show is how they want us to feel bad for Brandon while juxtaposing him with Callie and Jude.

@theworkprint
Follow
Previous articleDetails Revealed On Xbox One DVR Feature
Next articleThe Bachelorette Finale: Is this Over Yet?