No, I didn’t misspell one of the most unfortunately resurrected and overused ad hominem attacks in recent years. And you can just forget it was misspelled — the series barely makes an effort to point it out. In fact, let’s just bury the word, “douche” as an insult because it’s vile as hell and doesn’t even make sense on its face.

Anyhow, the word is actually painted on the side of Tom’s truck. And he’s angry that the word “DOOSH” is there. So, either Tom is as fucking stupid as everyone else is on this show or he’s a master linguist who corrects your spelling on Facebook. Nope, it was the former. “THE PHOTO OF MY TRUCK JUST WENT VIRAL!” screams Tom, channeling Michael Shannon as Zod.

And the only thing I could ask was, “How in the holy hell did that go ‘viral’? Is this the Internet from 1996?”

By the way…you guys do remember Tom, the Teen TMZ jock second-in-command from last week? No…?

Neither did I. I actually had to go and look him up on IMDB. In fact, I had to look all these characters up.

And I don’t wanna hear, “Maybe you’re getting old and the old brain isn’t working the way it used to.” I’m 37 and, after the first season of many of the shows I watched, I can recite the names of every single character from Game of Thrones, Veep, and Mr. Robot, just to name a few. Look, either MTV’s “Scream” is some slow-drip masterpiece of teen horror or I’m right and this is one of the most ludicrous shows on television.

It even starts and ends the same way: the killer kills…hang on, I think IMDB knows this. You know what? Screw it. He kills a blonde girl who’s all depressed and cuts herself with razor blades because I think that’s the only teen stereotype Scream hasn’t raided and taken advantage of yet. It’s the normal thing. He calls the girl, she thinks it’s somebody else, the killer tells her to start opening doors in her house to find out where they’re hiding like it’s some warped version of “The Price is Right” where, instead of winning a new Chevy truck, you get stabbed in the kidneys — and she does it because the idea of this somehow seems as intriguing and alluring to a manic depressive as “Candy Crush”. Anyhow, the girl bites it because she goes outside when she shouldn’t have. She’s hung from the balcony of the second floor of her house — though, to her credit, she’s not wearing a thong and bra…so there’s that. Though, at this point, that probably would have been preferable to what this show is putting me through on a weekly basis.

The police who, I swear, haven’t left the precinct since the episode started, are very troubled to learn that this is connected to Emma’s past because the killer is using a “Brandon James mask”. This, after the killer taunts them with an animated selfie GIF of him/herself with a body floating in a pool behind them. The GIF — you guessed it — “WENT VIRAL” even though mass-texting a GIF isn’t “going viral”.

That’s one thing. The other thing is that the original “Ghostface” mask was inspired by the famous painting “The Scream” by Edvard Munch. The painting depicts a man screaming against a backdrop consisting of blood-red clouds. Munch said he painted it because it was as if a scream had cut through the once-peaceful landscape around him.

Admittedly, the new mask created for the show is creepy and off-putting, but saying it’s a mask mimicking the town’s thought-to-be-deceased mass-murderer? I mean, first, that makes no sense even if you’re high from downing amphetamines with Maker’s Mark. The police have seen this mask before? Is it sold in stores? Does the family of the killer know somebody’s profiting off his death? Can we get an answer to any of that, please?

The fun of the last mask was that it meant something. It was reminiscent of a nightmare. I’m not scared of the new mask despite the fact that it’s basically the original melted in the microwave. 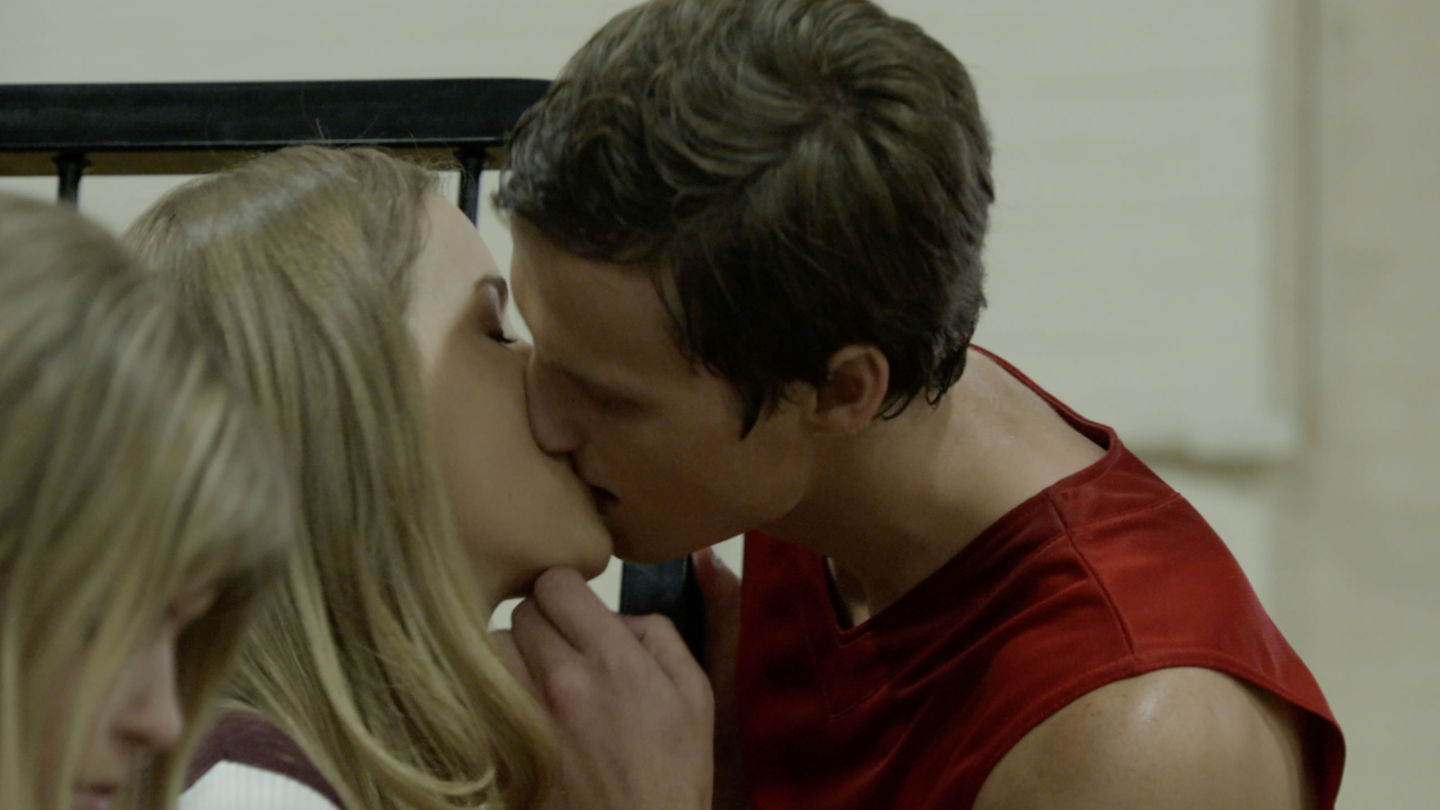 The majority of the episode deals with Emma who confesses to her boyfriend that she kissed another guy. Seriously. The other characters deal with getting laid. Also, the lesbian girl from the last episode is the emotional crux of this one even though she’s surrounded by death and destruction. There’s a small segment where she watches old clips she recorded of her and the 2nd victim set to music but It never goes further than that — and it really needs to as the show is both devoid of anything that could be construed as “something to latch on to”.

I can’t even get with Noah, the “Randy” character in this mess. Let’s see: we’ve had a guy going around calling people and taunting them with Tumblr animations, while Noah tells us that this is basically like a TV show based on a horror film — and he’s answering vague texts and wandering into vacant football fields while yelling the name of the person who texted him. He’s fucking Randy from Scream. He’s hip to this bullshit. So, why is he doing everything he’s telling others not to do? And, worse yet, he’s advertising other goddamn movies. He’s laying there with “Riley” (and I had to dig for that name — IMDB has her listed 15th or so on the cast list) and they’re talking Terminator. Noah’s explaining how awesome Sarah Connor is and Riley responds the only way this show talks outside of being horny: “Is that the new Terminator movie that just came out?”

Jesus H. Balding Christ Eating a Cracker on a Raft. The irony of this is that they don’t suddenly superimpose images from the film on the bottom half of the screen with IN THEATERS NOW plastered across it. I’d be praising that decision — except the aforementioned space on your HD screen is reserved, instead, to tell us the name of the “songs” that play during key scenes on the show. I put “songs” in quotes for a reason, as they consist of what ever yowling, hellish emo shit most likely didn’t make the cut from all five Twilight soundtracks. MTV is obviously obligated to plug these songs being who they are. Either that or the producers haven’t yet discovered that Shazam exists. The latter is a safe bet since MTV apparently thinks spam texts and “going viral” are the same thing.

So, as I said, the show ends with the Killer calling Emma and taunting her and, just like last week, this was the best part of the show. Hell, the episode is named after the ending scene, which makes one speculate that even the writers are subliminally admitting defeat. Emma’s the person we have to “like” despite the fact that she really doesn’t stand out from the others on the show. I really can’t blame the show’s producers. They were given a terrible, unlikeable cast and they’re being forced to focus on the lesser of 10 evils.

The only good thing I can say is that the show seemed tighter this week, which is probably due to a running time that’s about 20 minutes lighter than last time…but this show will only survive because it’s being watched by a generation who thinks the “DOOSH” gag was funny — and probably spells it that way, too.