“I’m gonna be more ‘normal’ now. Maybe Shayla can even be my new girlfriend. I’ll go see those stupid Marvel movies with her. I’ll join a gym. I’ll ‘heart’ things on Instagram. I’ll drink Vanilla Lattes. I’m gonna lead a bug-free life from now on. Anything to protect my perfect maze.”

Last week’s goofy ending (Mr. Robot pushing Elliot off a ledge) causes Elliot to re-think his life and just get plain weird in this week’s episode of “Mr. Robot”.

This episode finds Elliot waking up in the hospital to find his drug dealer, Shayla (she’s his emergency contact) and a hospital psych standing at the foot of his bed. He’s already defiant in his medical captivity, raging against the “drugs they’re pumping into him that the corporations make money off of”. Despite his anger, Elliot is able to doctor his records so as to not make him look like his Morphine addiction landed him here. He claims that every single person is full of “bugs” that make them imperfect and exposes the hospital’s pitiful cyber-security to erase the ones that plague him.

Lies are his specialty and he tells his psych that he’ll no longer rely on Morphine, immediately taking a bump at a local convenience store before finding out that Evil Corp’s cards are useless due to a major financial hack. Mr. Robot’s hacker colleague, Darlene is overjoyed. “Jessica Alba says she wants to join ‘fsociety’!” she declares with admiration and tinge of disgust.

Elliot’s boss, Gideon, remains stupidly optimistic, claiming that somebody from ‘fsociety’ will get sloppy — then invites Elliot, Angela and Ollie to his place for a nice steak dinner. Elliot remains his usual evasive self, declining the invite and Gideon’s not happy. He tries to feel out Elliot due to his missing time at work and his disheveled appearance — and Elliot tells him, in short order, to fuck off.

And, just when you think it can’t get worse, Mr. Robot appears right there at Elliot’s desk. After a brief altercation and a man-to-man talk, Mr. Robot informs him that Elliot is “the key to everything” and, without his help, fsociety is completely dead. 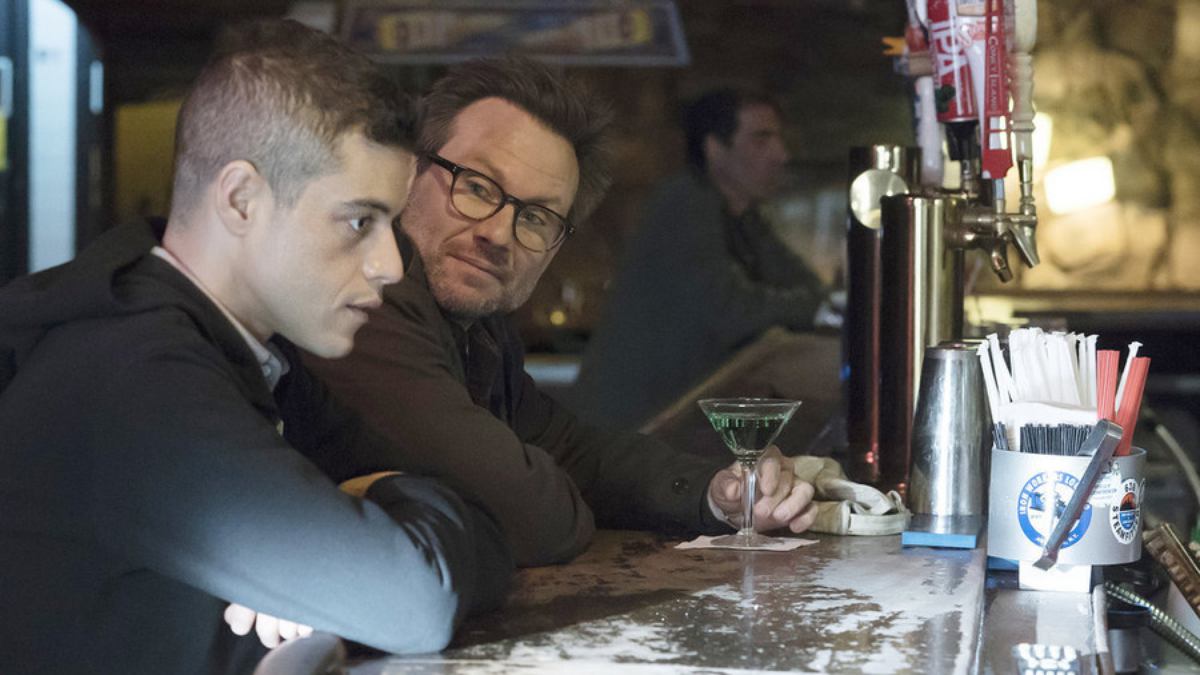 From there, Elliot looks to rid himself of his “bugs”, vowing to be “normal”. To hell with wishing for it, he asks Shayla to be his girlfriend (they even kiss — *GASP*!) and invites her to Gideon’s dinner party — much to Gideon’s shock. This sets up a great moment between Elliot/Shayla and Angela/Ollie where everyone shares awkward conversation about how they met. It’s moments like this where you truly get behind Elliot’s need to be away from people because, when it all comes down to it, why should anyone have to put up with the weird looks when you say you’ve only been with somebody “since today”?

And speaking of awkward, Ollie’s in big trouble: somebody has found out that he’s been cheating on Angela and they’re willing to make Ollie’s life a living hell by releasing their banking information along with their Social Security numbers — that is, unless Ollie brings in a CD containing a virus that will infect his entire workplace’s network. Does she do it? Eventually, she breaks and does. But we finally get to see into Angela’s soul. Earlier, during her daily jog, she picked up and returned a wallet belonging to a passerby. “You’re too good for this world and that’s probably why I love you so much.” Ollie remarks, causing Angela to visibly wince. The wallet moment brilliantly sets the table for the moment of truth: Ollie electing to confess his affair which tests his diagnosis of her character. Initially, it looks like Ollie’s wrong:

“I know I have a problem,” he pleads.

“Well, my problem is that I can’t be with somebody who has your problem,” she replies — then suggests that they have no choice but to infect the network, per fsociety’s orders. 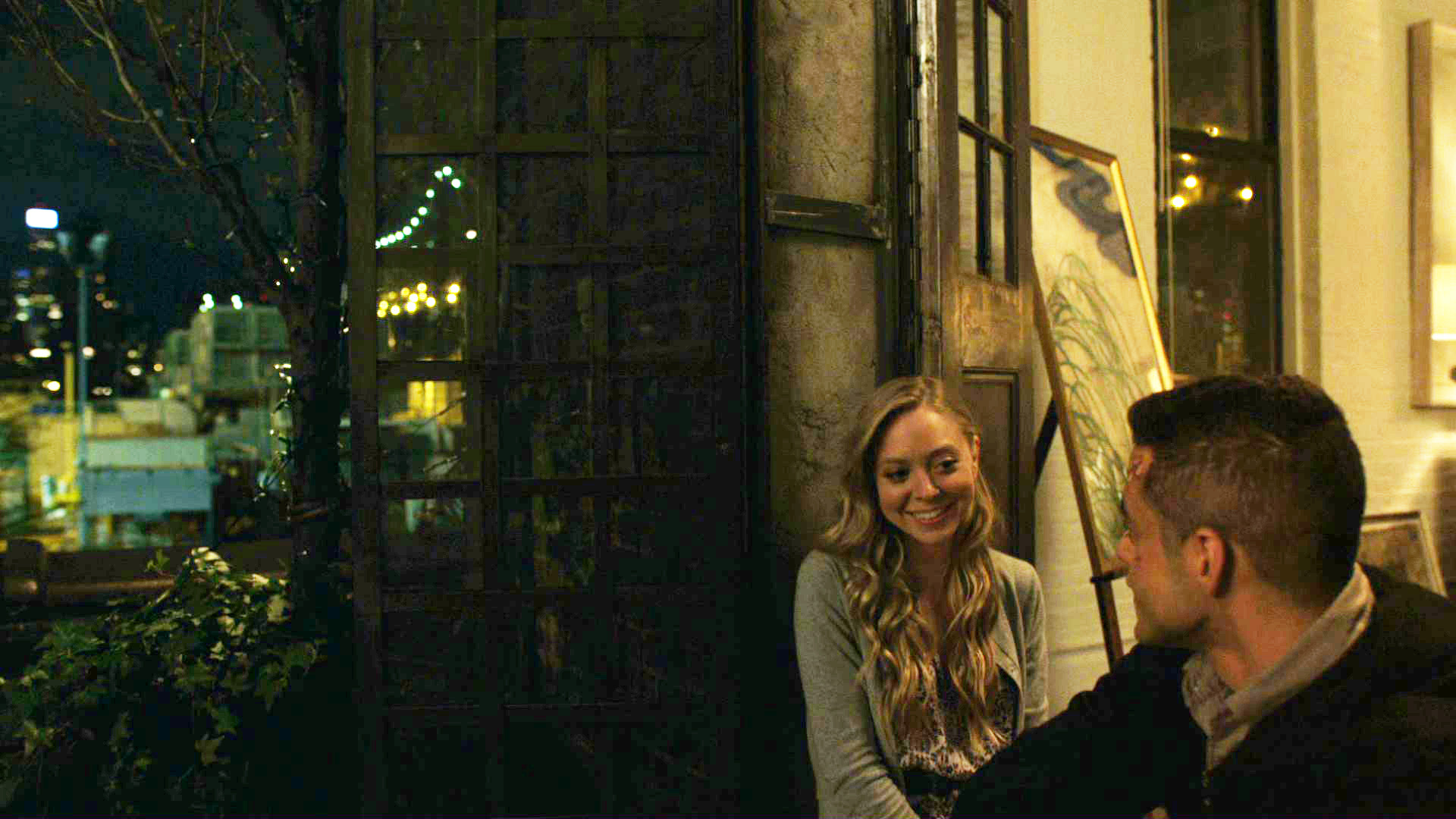 As I’ve stated before, nearly everyone except for Elliot has been well-developed. It isn’t until this moment where we find out that underneath the Jedi Knight do-gooder shell lies a Sith Lord. This is a very welcome development as this show moves forward.

For all its pros, the episode has some unfortunate cons.

I’ll try to be brief about the heavy metaphorical sledgehammer this show continues to brandish. I know the aim was to make some sort of a point about “human bugs” and how everyone has them and that they can be fixed or found or lost and discovered and then fixed and then…the more Elliot talks about it, the more I’m inclined to chuckle at it and think of overwrought it is. The producers really need to start learning that less is more. That would tighten things up considerably.

This goes hand-in-hand with my other issue: Tyrell Wellick’s story. Without going into too much detail, he’s a very disturbed individual. He does the following:

And I wouldn’t have an issue with it if it wasn’t derivative of a Bret Easton Ellis novel. For the last couple of episodes, we’ve been watching a very confident guy who controls everything and is smart, charming and demonically bright-eyed — and then there’s this arbitrary left turn where he’s suddenly a borderline psychopath who never smiles. It’s like we’re not even watching the same character anymore. I didn’t buy any of it. If that’s what they want to do with Wellick, great. But let’s pick a lane here. 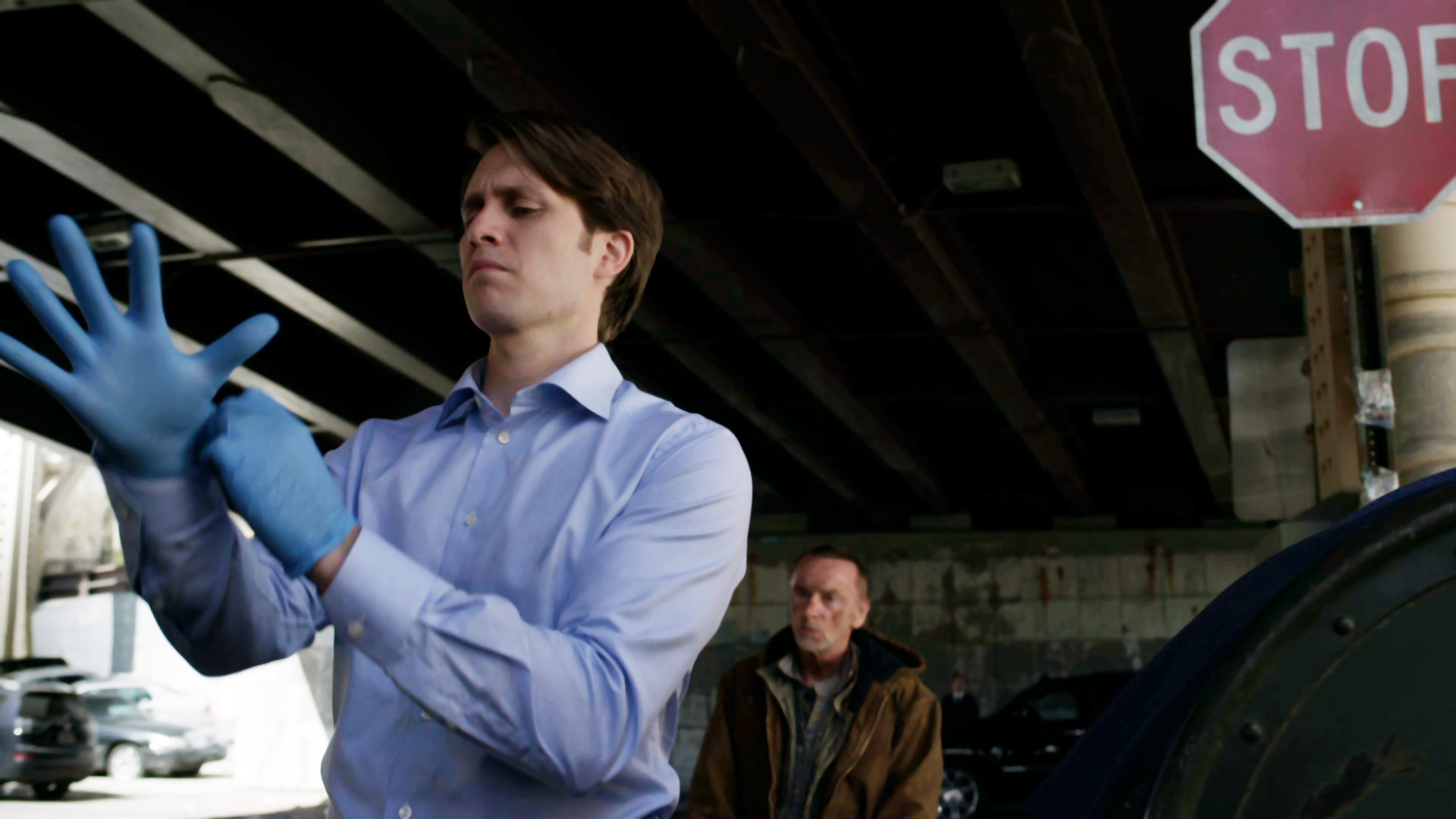 Those might be minor gripes. The rest of the episode is brilliant stuff and I must say that the camerawork featured in this episode is some of the best I’ve seen so far. Some might think it apes David Fincher (and I’ll admit the people saying that have a point) but considering that Fincher’s production company’s involved, I have no problem with it. The cinematography just added to the episode.

Overall, I hope this is a sign of things to come for this series as this episode seems to make an immediate and welcome u-turn back to form for Mr. Robot.