‘The Flash’ Crashes of the Week: “The Fury of Firestorm”

Much like Arrow, The Flash has now become a show to watch with my sense of humor turned way up. I don’t think that’s necessarily a bad thing since one should never take any comic book property too seriously, but with all the disjointed plots, one-dimensional villains, and over-the-top acting I can’t, in good conscience give The Flash a positive review of late. That being said, I can talk about all the wall-crashing antics on the show.

In season two’s fourth episode, “The Fury of the Firestorm”, Team Flash is desperately trying to find another half to Professor Stein’s F.I.R.E.S.T.O.R.M. Meanwhile, Iris and Joe West are dealing with revelations about Iris’ mother.

Let’s get into the nonsense, shall we?

I’m a fan of Victor Garber’s Professor Stein. I’ll admit that he and Jesse Martin are out of The Flash’s league, but they work well on the show. That being said, I felt the whole rescue ordeal to be too disconnected to make any sense. The first matter is the show’s tendency to talk over the heads of most viewers (e.g. me). I appreciate the science in the show but I’m increasingly feeling like they treat science and anything at S.T.A.R. Labs as a catch-all for intelligence. There is nothing that Cisco and Caitlin don’t know about and when they talk it’s like they’re speaking another language.

I’m not sure I understand how they even found potential matches for Professor Stein because by their logic, everyone in Central City is a metahuman and boy, does that make the show exciting. Or not. They ran some Tinder app for metahumans and Caitlin swoons over the metahuman scientist and the whole thing was so cringe-worthy my eyes rolled out the back of my head.

Don’t get me wrong, I’m excited for the setup to having Wally West on the show (even though I think they’re introducing way too many characters too soon), but the way they’ve done so with Iris’ mother has been chaotic and cliche. She’s dying so she wants to reconnect with her daughter? Boo hoo. I don’t buy it. She kept her son a secret because of what, spite? Guilt? I do like the way Joe and Iris have both handled the situation, and Iris has been surprisingly likable throughout the whole ordeal, but Francine needs to go. 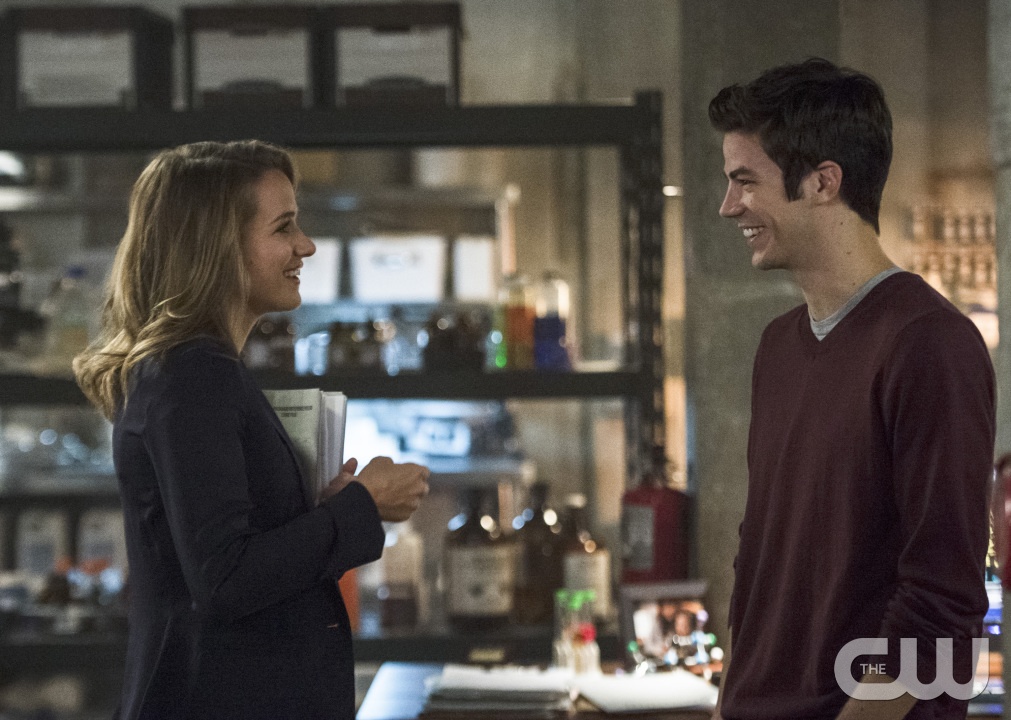 Patty and Barry sitting in a tree

I like Patty, I do, but this whole forced relationship thing they’ve got going on is too much. It’s like the writers are smashing the two characters faces together proclaiming, “YOU WILL LOVE EACH OTHER.” Goodness guys, that’s not how romance works. Either kiss and get this started or just be friends but I cannot sit through another agonizing “dad” conversation with Joe where he’s like, “You need to get over Iris and get out there and get some love, Barry!”

You chose this guy?

Henry Hewitt as a villain was awful. I don’t think they could have made it more obvious and caricatured if they tried. I know that The Flash isn’t well-known for having great weekly villains but Hewitt seems worse than the usual fare. They didn’t even do a thorough background check before inviting him to S.T.A.R. Labs? So much for that upgraded security from earlier in the season, amirite? But hey, none of that really matters because they’ve got Hewitt locked away in the pipeline. Even though he made the news, it’s completely normal that he just…up and disappears.

I guess nothing is sacred anymore

Okay, this is a big one. The BIGGEST one. I know that I harp on Team Arrow A LOT for divulging their identities to anyone and everyone, but good grief, did Team Flash just have a casting call and tell everyone that Barry Allen is The Flash? Oh, sure, they didn’t overtly tell the viewer that’s what they were doing, but anyone with a brain is going to realize the tall, lanky white dude who looks kind of like the Flash is the Flash (I mean, did we see him on TV without his face blurred??). Maybe we shouldn’t just broadcast we’re looking for super heroes without doing a more thorough background check. Also, Joe and Barry are both ON the CCPD payroll. Maybe, you know, they could help.

On top of that, the security in S.T.A.R. Labs is almost as atrocious as the security in Mercury Labs. Harrison Wells just goes wherever he pleases with his awesome bed hair these days without so much as a shrug from anyone on the show. “I know he’s supposed to be dead and all and maybe we should be worried since he’s a genius villain with super speed, but dude, guys, there’s a shark out there. WALKING.”

But hey, it’s not all bad. That King Shark was pretty….cool. Maybe King Shark and Gorilla Grodd will fight to the death!? HECK YEA.

@theworkprint
Follow
Previous articleWho or What Was the Reaper in “4722 Hours” on ‘Agents of SHIELD’
Next article‘Awkward’ Recap: “Say No to The Dress”