‘Awkward’ Recap: “Say No to The Dress”

This week on Awkward: Just never drink red wine in a white dress.

Jenna and Tamara are getting dolled up for prom. All of the plucking, tweezing, crimping and curling result in Jenna looking like a Geisha and T looking like a Russian mob wife. They are very much regretting getting their Prom look done at a mall salon named “IVana Haircut.” 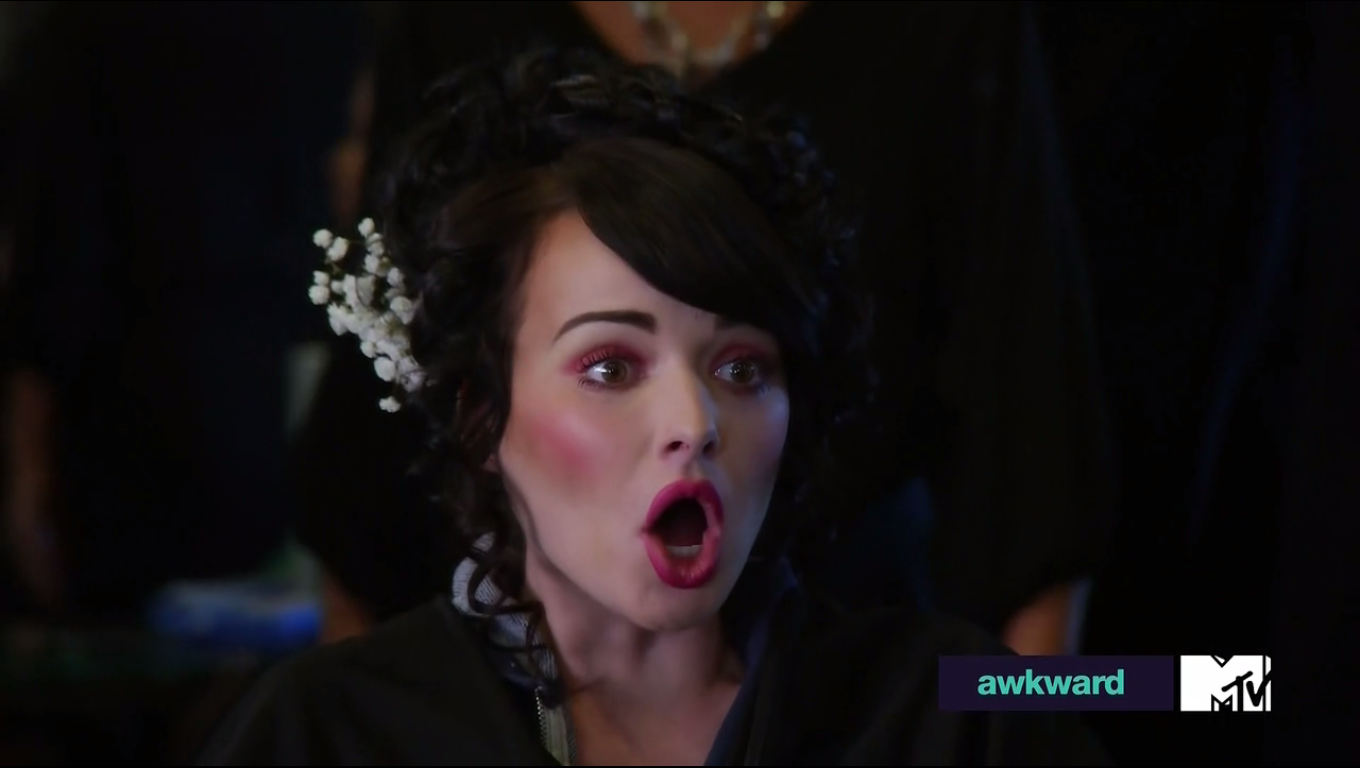 As they leave the salon, the two promptly run into Matty and Jake who are on their way to their male prom prep which is literally just picking up their rental tux and figuring out what a cumberbund is. Jenna inner-monologue’s that even though she isn’t wishing she was going to prom with Matty, all that she wants is for MATTY TO BE WISHING HE WAS GOING WITH HER. Is that so much for her to ask?!?! Not for Jenna it’s not.

The girls get home, fix their hair and makeup and Jenna slinks into her prom-court-mandated attire: a white floor length dress. Her dad proposes a toast to this huge milestone his daughter’s life with the enemy of all white clothes everywhere, red wine!. Stupid dad! Red wine stains! Lacey instructs her husband to go downstairs and get a sippy cup for Jenna to drink from. Even though Pops has already raised a child, he has no idea how to put a top on a sippy cup which results in Jenna spilling red wine all over her dress. Suffice to say, Jenna’s dress is ruined. What is Jenna to do? Finding a white floor length gown the night of your prom is an impossible task. That is, it is an impossible task ONLY if you don’t have a former HS bride-to-be as your best friend. Tamara calls up her personal bridal shop owner to procure a dress for her bestie. 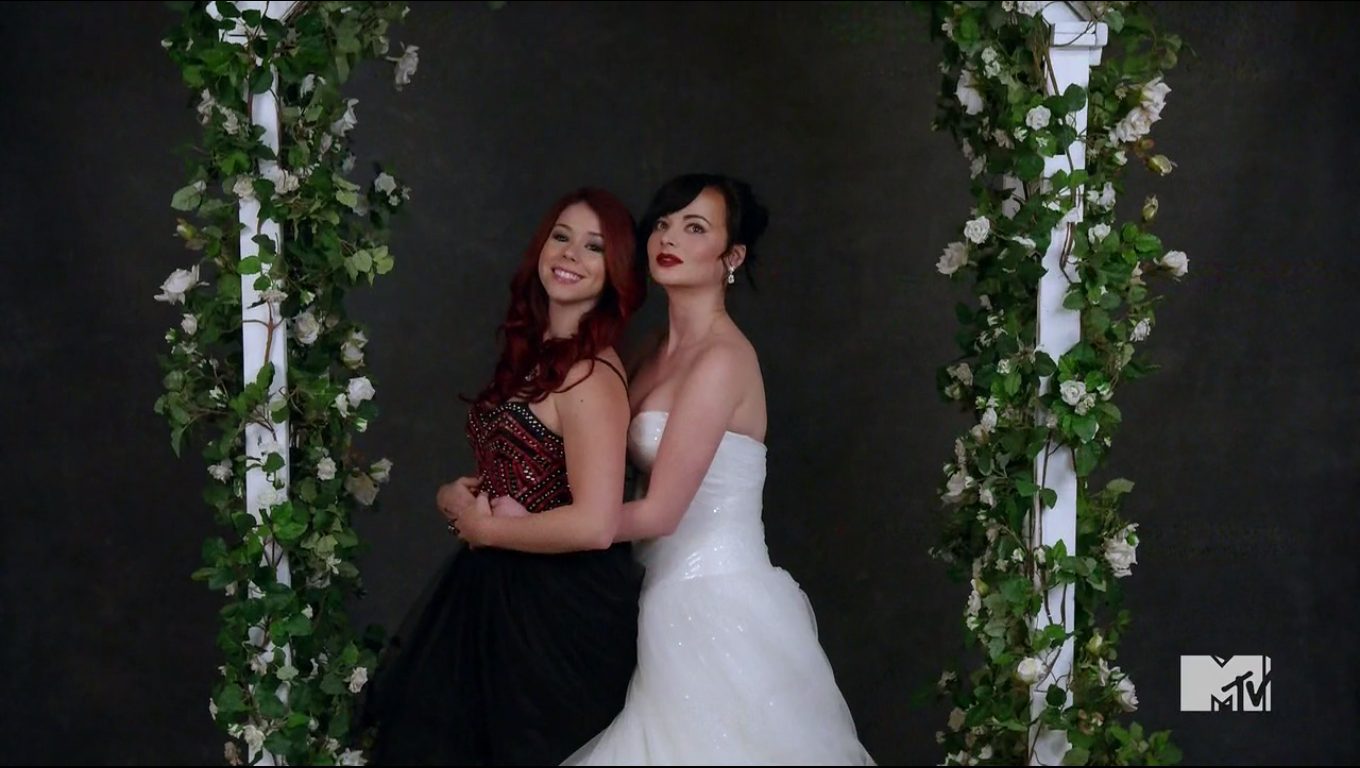 So yes, Jenna is wearing a huge white foofy wedding dress to her Senior Prom. The dress is so iconically wedding-esque that when Jenna enters the prom hall, the DJ promptly plays “Here Comes the Bride” (because honestly, what prom DJ worth his weight in gold doesn’t have that diddy stored in his back pocket). The dress is so big she can’t even figure out how to go to the bathroom, and when she leaves the bathroom stall and sees herself in the mirror she starts bawling. This isn’t the prom that she dreamed of. Even in her worst nightmares she could never have anticipated her prom experience being this bad. T tries to cheer her up by grabbing some nail scissors and going all Project Runway on that dress’s ass, but it ends up just looking more of mess hot mess than it did to begin. Then the two start crying and decide it is time to ditch prom presumably to go watch Sex and The City. Just as they are about to leave, Adam comes floating into prom he and T reconcile and Tamara is elated. She is all smiles, and when Tamara smiles, I smile because honestly, look at this face. 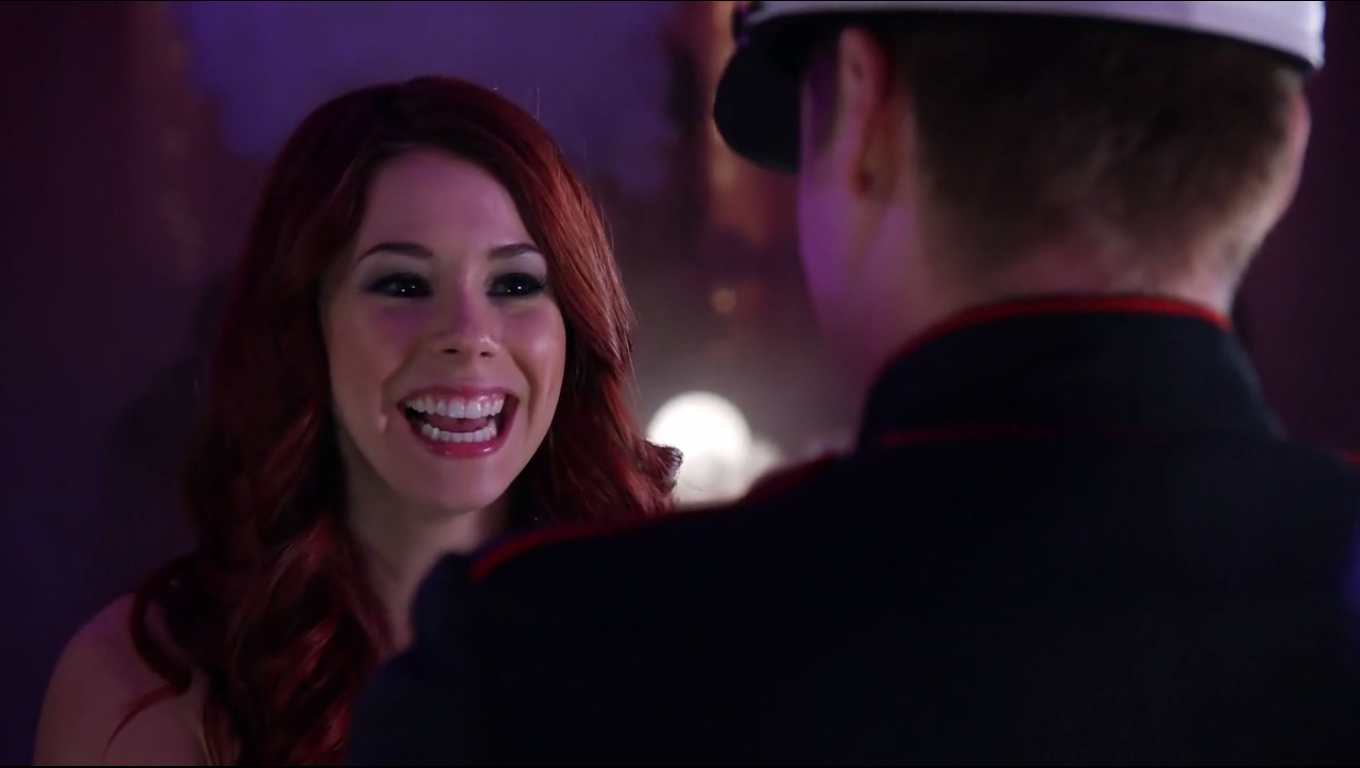 Sadie is at Lissa’s house taking prom pictures with her two hunky dates (Matty and Jake) when her devil mother Darlene shows up with her boyfriend Ted. She tells mom that she knows that she is only pretending care about Sadie because her new boyfriend would only marry a woman who puts her kids first. Darlene does nothing to deny this and is instead more concerned about whether or not Sadie will blow her cover.

When the crew arrives at prom, Matty and Sadie have some amazing best banter about trying to make the most out of senior prom. I love Matty and Sadie scenes for two main reasons. First, it is one of the few times you get to see a fun playful side of Sadie instead of her usual bitchy snarky self. Second, I really like how it shows a deep and meaningful friendship between a guy and a girl without any sexual undertones. They are just two really good friends who happen to be opposite sexes. God I wish there were more Sadie and Matty scenes.

When the two finally walk into the prom hall, they realize that this isn’t the fairytale themed prom they were expecting. Instead, the prom is basically a My Little Pony princess theme with a pink castle behind the stage, fluffy cotton ball clouds hanging from the ceiling and melted pink ice cream as the only beverage. Matty and Sadie decide to peace the fuck out and head to their limo, leaving Jake to fend for himself (which is fine because Jake’s storyline is pretty lame). In the limo, the two get drunk from sharing a small flask of whiskey and have a heart to heart. Although it physically pains Sadie to admit it, she tells Matty that he is still in love with Jenna, and that since it is prom he needs to confess his love. He then commands Jeeves (the driver who he just forced to drive his limo through a drive through) to drive them back to prom. This poor driver, I hope they tip him well!

What happens next? You have to tune in next week to find out!

Sadie Quote of the Week:

Sadie: “Have you ever worn Spanx? It’s like a tourniquet for your internal organs.”

@theworkprint
Follow
Previous article
‘The Flash’ Crashes of the Week: “The Fury of Firestorm”
Next article
Nintendo Announces ‘My Nintendo’ and Year End Financials