Two Young Bucks Enter, But Only One Can Win

After another two minute long “Previously on” segment, we begin where we left off, with Cory and Hunter (two of the three Young Bucks) about to go head-to-head in the Presidio. In case you forgot they are playing “Dead Weight” where they have to race to the top of a ladder to ring a bell while breaking through dry wall shelves with heavy balls attached to their ankles. 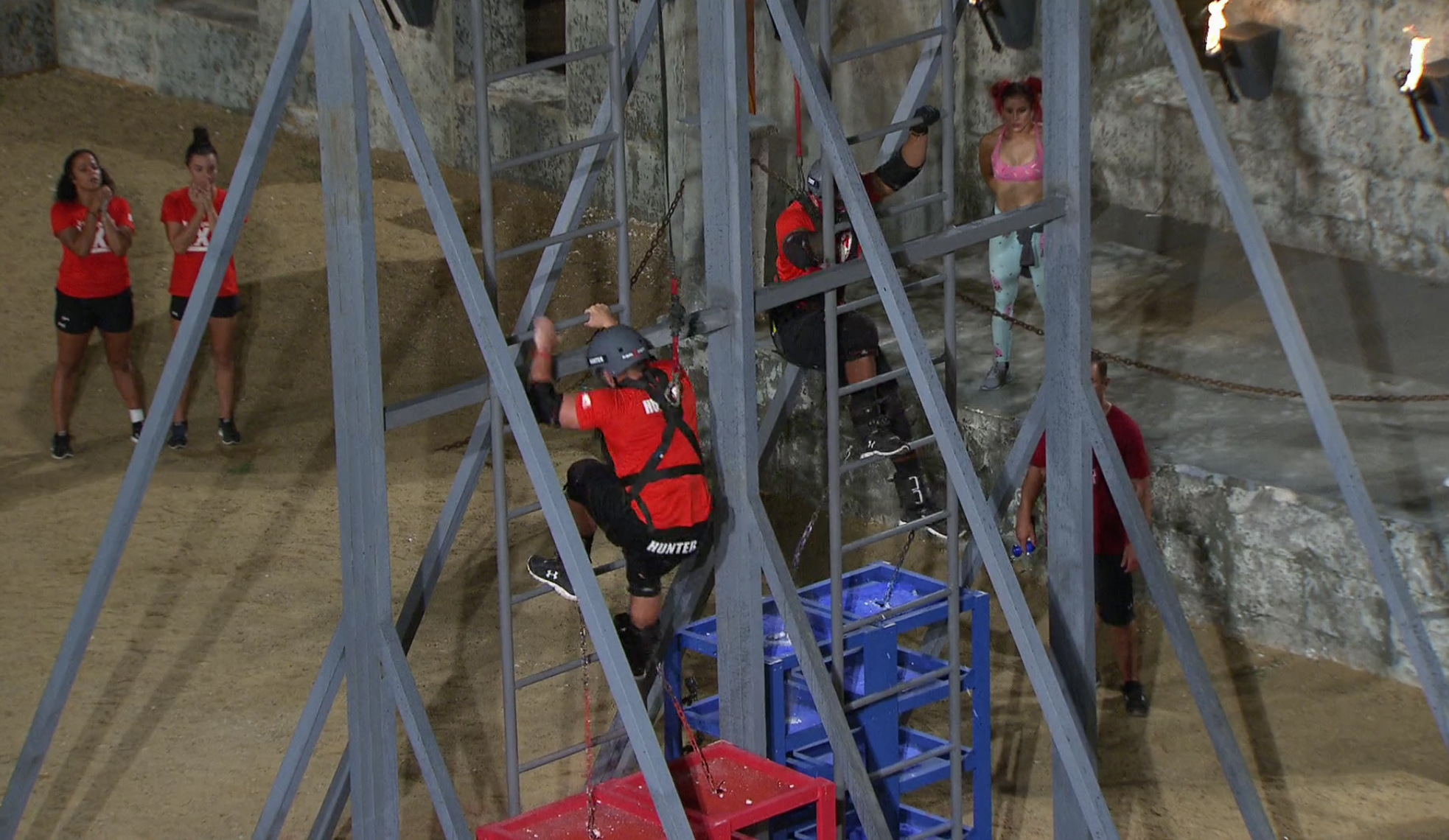 First and foremost, the video editing on this challenge was wack. This is a straightforward challenge: the competitors are side by side climbing up a ladder. There are really only two things that matter 1) How many sheets of drywall they have broken through and 2) how far up on the ladder they are. There was no reason for them to show a shot from above Cory, then a shot from behind Hunter, then a shot of the wrecking balls, then a shot from a random side angle, then a shot from the spectator’s point of view all in a 30-second time frame. I know it is hard to create suspense or mystery regarding who has the lead when the competitors are side-by-side, but cutting and pasting 500 different shots of The Presidio together isn’t the way to solve the problem.

In the end, Hunter is the first to ring his bell and beats Cory by a hair. With that, Cory and Aneesa will be packing their bags and heading to The Redemption House.

On his way out, Cory gives all the housemates a hug, and gives Johnny a dick punch. Cory, I love you more and more every week. With Cory now out of the house, Jordan has decided to rename the game “Get them, Before you get got.” Jordan, that is a horrible name. Jordan, stick to your day job.

The way that MTV has been promoting Trivia Week this season, as though it is the most beloved and treasured Challenge past time ever, was bizarre. Don’t get me wrong, I love me some trivia, and it is always fun to watch the competitors give crazy wrong answers and splash into the water, but it isn’t really entertaining enough to bank an entire episode on. 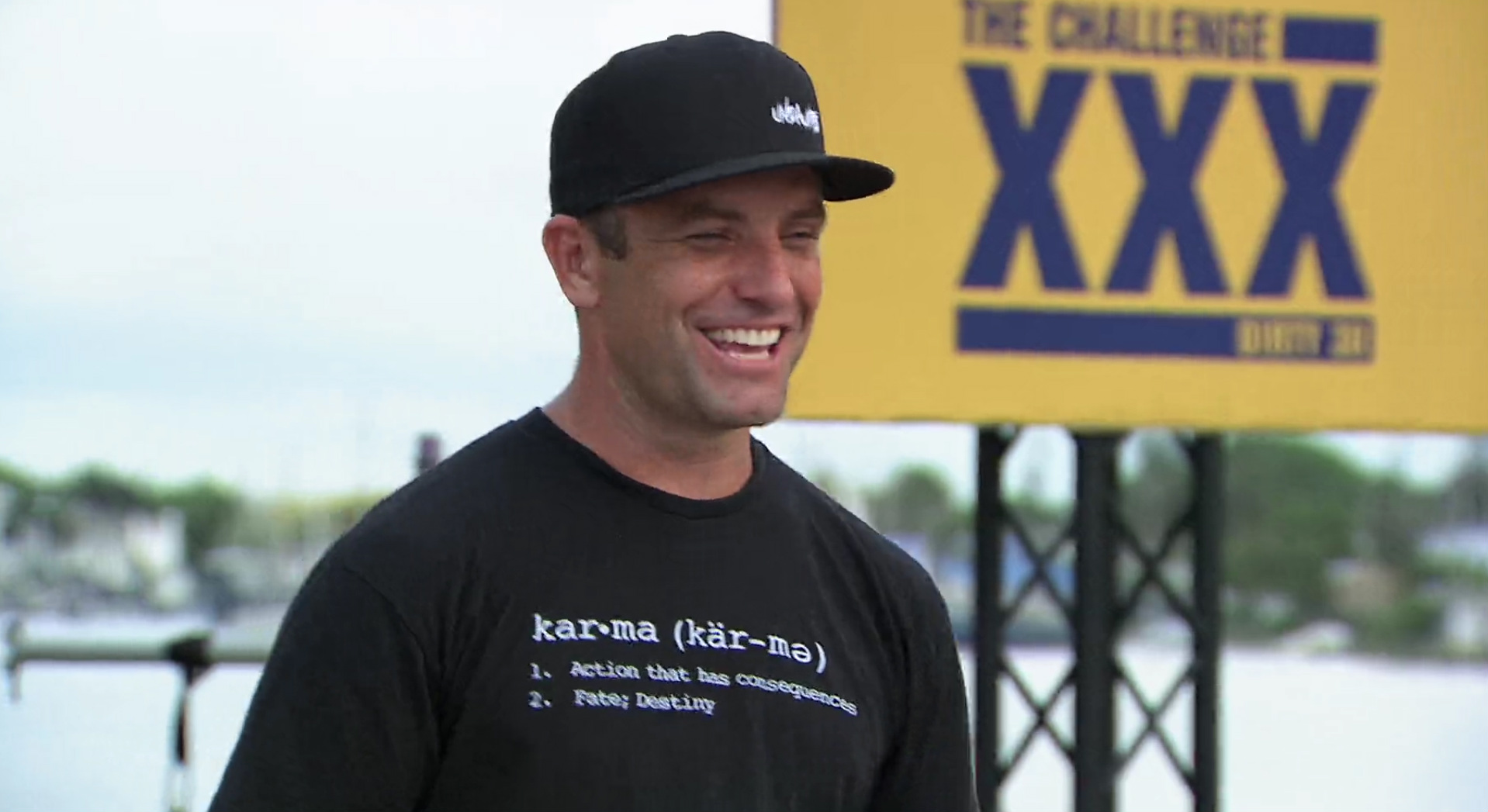 In the true Challenge Trivia tradition, “Talk Thirty to Me” takes place high above the water, and the players are suspended by a rope off a ledge, with only the balls of their feet holding them in place. If you get a question right, not only do you not get an X against you, but you are allowed to give any other player an X. This means you can get every question right, and still lose if everyone assigns you an X. The winners of the male and female heat are safe from elimination and able to send someone to the Presidio. Additionally, they also win a “Stress-Free Vacation” for themselves and a friend to a place.

With this in mind, Kailah and Hunter (the winners of the previous Presidio) go off to make the lineup for the Challenge, and fuck themselves over by putting themselves last. This is the second time that Kailah had the power to make a team/the lineup of a challenge and failed monumentally.

As the girls set up to start the challenge, Camila has a panic attack and starts crying out that she is leaning too far back and she can’t do this. TJ half heartedly tries to comfort her by saying “everyone is leaning back the same” and to basically suck it up so they can get on with the challenge. Nicole thinks that Camila is doing this to get attention for herself and astutely points out that Camila has done far crazier shit than this. I personally don’t think that Camila was faking nor do I think any less of her as a competitor because of a panic attack. Sometimes your mind and body react in ways that you could never have predicted. The fact that she still competed after having the panic attack, and was able to work through it and calm herself down, proves that she is a strong competitor. That said, we all know if the roles were reversed, Camila would have a field day if another competitor had a breakdown like that before a challenge. 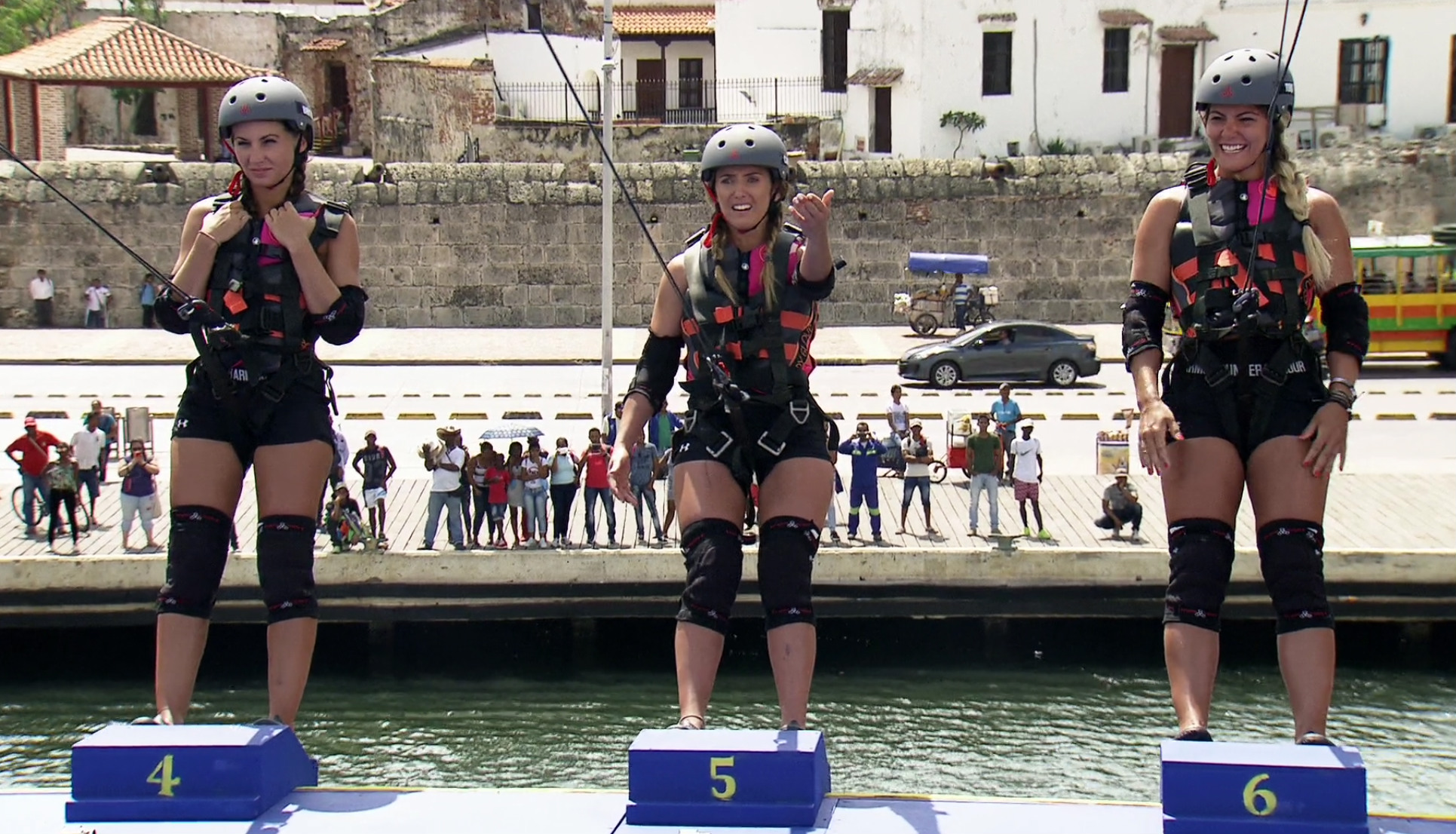 Camila ends up winning the girls’ heat of the Challenge, and when she gets down she tells the camera:

Camila: “All of these girls need to be worried right now because I haven’t really seen any loyalty. I feel like I keep doing for them. What are they doing for me in return.”

Wait, what? This legit sounds like it was a sound byte taken straight from the mouth of Mr. 45 himself. Let’s analyze this quote step by step. When she says that she hasn’t “really seen any loyalty” is she including herself, or does she forget that one time she told everyone she was going to vote for Cory, said Cory’s name out loud to TJ, and then changed her vote to Hunter at the last moment. Second, we learn Camila has a transactional definition of loyalty: I do for you, you do for me. That is not loyalty, that is quid pro quo. Thirdly, has Camila actually even DONE anything for any of these girls? What delusional planet is Camila living in right now?

Next, it is the guys’ turn to answer questions and fall into the water and Tony ends up the winner. I love it when the people everyone thinks are stupid wins trivia week, like when Jenna won in Battle of the Exes: II.

The Final Winners of “Talk Thirty to Me” are Camila and Tony.

The biggest drama to erupt from this week’s episode was Tony and Camila’s back of the bus make out session. This is the moment everyone has been waiting for. The moment that was promised in the season teaser, the moment that caused Tony’s baby mama to break up with him.

Before the scandal occurs, MTV wants to make sure we all remember that Tony has a GF and kid, and another kid with another woman at home that he cares about. He calls his girlfriend Alyssa (not me) and they talk about love and possible marriage. He is a changed man guys, HE HAS A KID! After Tony wins the trivia challenge, he tells Johnny that he will use the “stress-free vacation” that accompanied his victory to propose to Alyssa. Aww, that’s cute and romantic. Fast forward 5 minutes, everyone is drunk coming home from Cara Maria’s birthday celebration, and way far in the back, Tony is sucking on a lollipop and smooching on Camila. 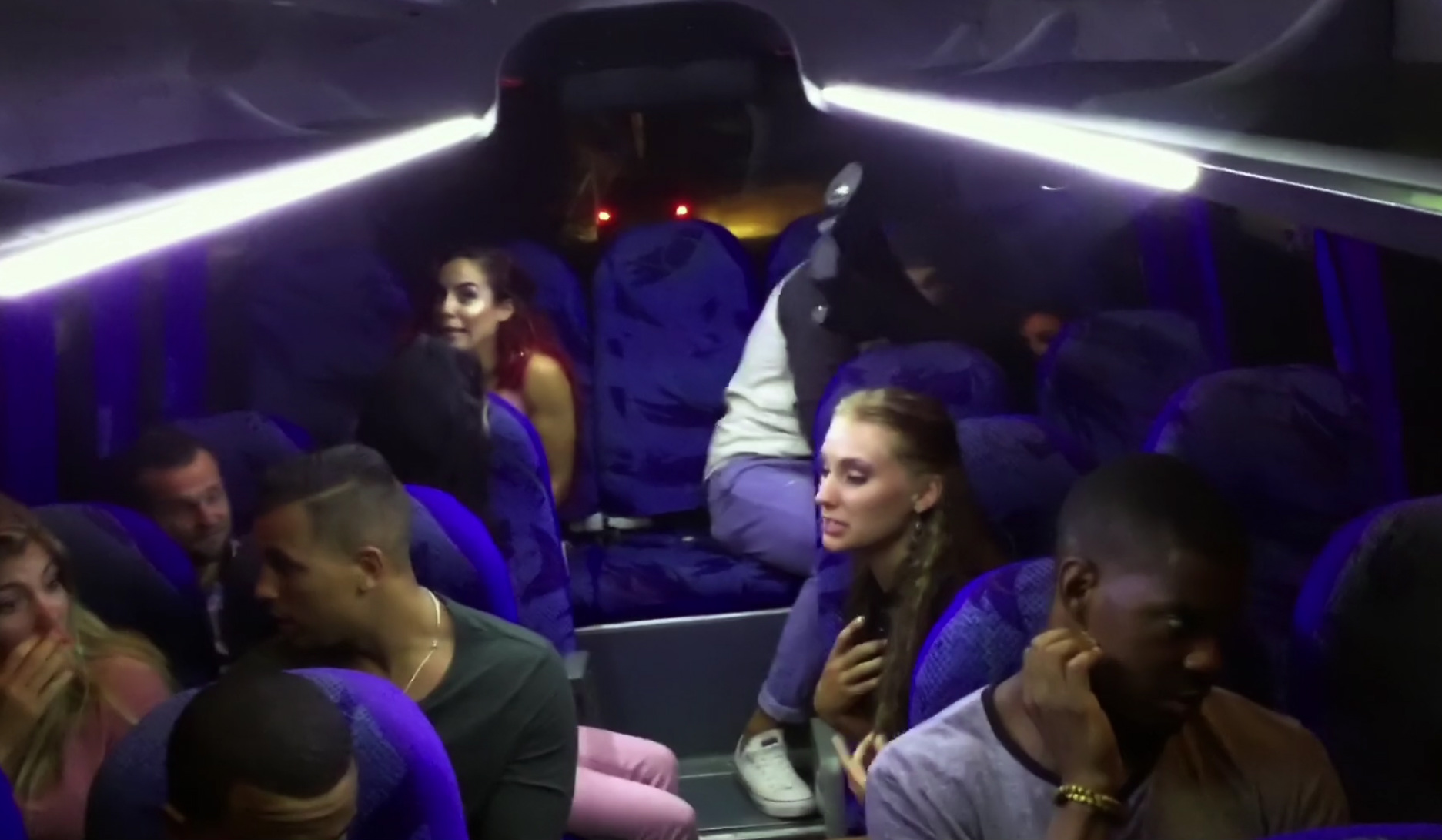 Last night, before the episode aired, Tony posted this message on his twitter. While this obviously does not absolve his actions or his betrayal of his ex-girlfriend, there is something to be said for someone openly and publicly owning up to and apologizing for their actions. I don’t know why, but I have a soft spot for Tony. I feel like he means well but always gets in his own way. What is unacceptable though, is the crazy amount of slut shaming that has been thrown Camila’s way online this past week. I have made it clear in this review, as well as several past ones, Camila is not my favorite person. That doesn’t mean that anyone has the right to blame her, or shame her, for Tony’s indiscretion. Camila isn’t the one in a committed relationship with a kid at home. She was drunk and kissed another drunk boy she was attracted to. The onus was not on her to stop Tony from making a mistake.

And on that cliff hanger, the episode ends. 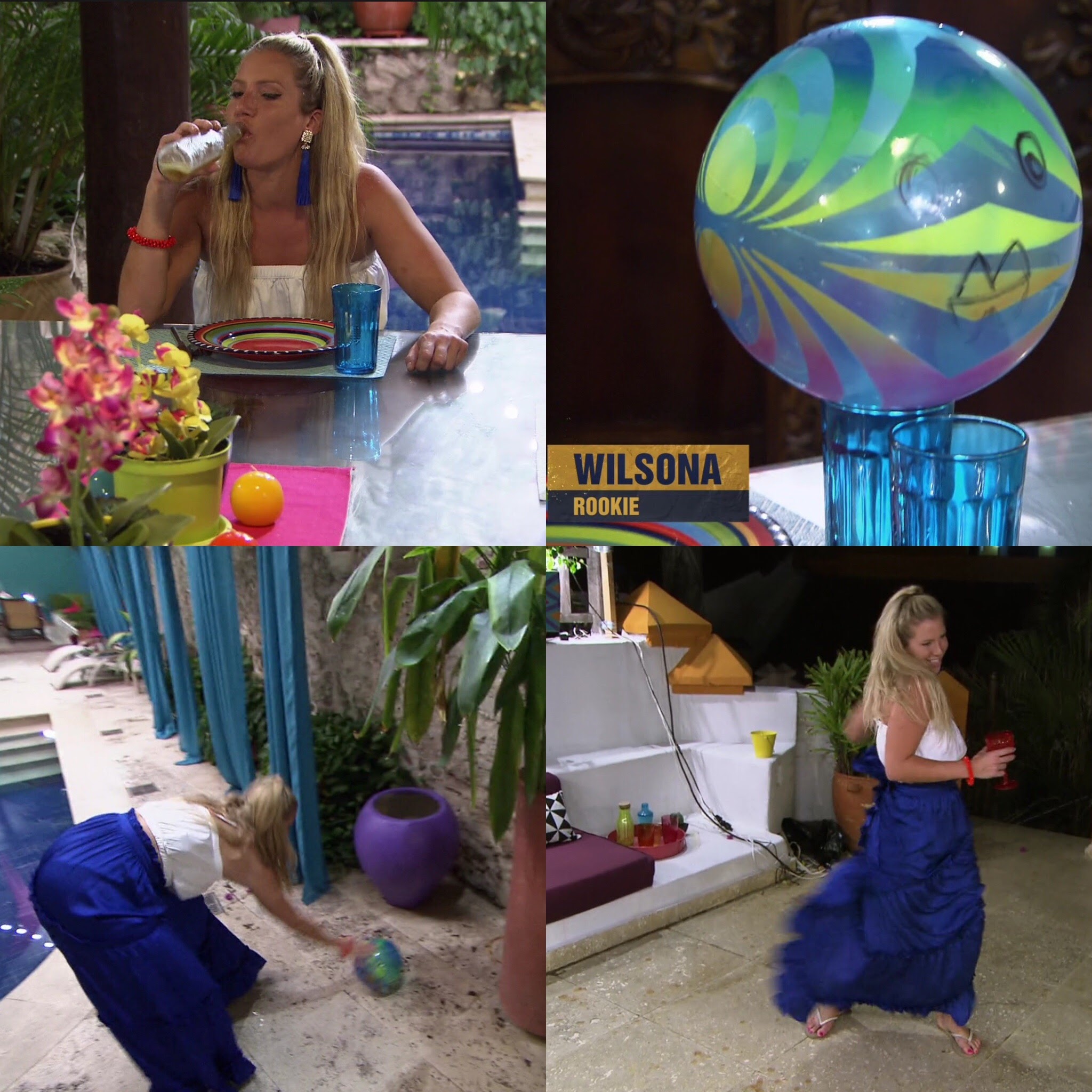 I could have gone on watching this for hours, but sadly The Marie Show was cut short by the arrival of Cory and Aneesa. It how now turned into Three’s Company: The Challenge Edition. Marie decides to be upfront with these two:

Marie: “Listen. I’ve been alone for a long time. I’m gonna be the most obnoxious 3rd wheel ever. I’m just putting it out there.”

Aneesa and Cory immediately go on the defensive and swear that they will never bang again ever in their lifetime ever. Even if these two don’t bang, they act super coupley which still kind of makes Marie a third wheel.