This week on the season premiere of Outlander: Jamie is excellent at playing dead and Claire tries to make her marriage work.

Droughtlander is no more, my friends! Outlander season three is finally upon us. Unfortunately for fans of the Show That Promised Smut and Romance, Claire and Jamie spend the entirety of the premiere, “The Battle Joined”, apart. It’s especially sad once we realize that even though Claire and Jamie yearn for one another, they’ll spend the next eighteen years separated. Imagine how different their lives might have been if Claire had only stayed behind in Lallybroch with Jenny instead of leaving through the stones. I’m sure that once Jamie recovers from his injuries, it’ll be a thought that haunts him often.

Jamie spends much of the opening episode dozing in and out of consciousness, relying on flashbacks to tell the viewer what happened during the Battle of Culloden. Props to Sam Heughan for his convincing portrayal of a man near death. When he’s not buried underneath Black Jack Randall reliving the horrific battle, he’s watching, helplessly as his friends and allies give their lives one at a time. Much of this doesn’t phase Jamie, as he’s already resigned himself to death. He knows that Claire and the baby will be looked after and Lallybroch’s affairs have been handled, so he has nothing else for which to live.

On the battlefield, Jamie fights Randall to the death, presumably, but Randall has a penchant for surviving even the worst injuries. It’s not a glorious duel, nothing like the one that happened in France, but that’s one of the best aspects of Outlander: it’s gritty and doesn’t glamorize war. Heroes drop like flies as the guns go off and even Jamie doesn’t have the energy to fight his nemesis as the battle rages on. Their duel ends not because one killed the other, but because they simply didn’t have the strength to carry on. It’s oddly sexual, Randall’s death scene, as he falls on top of Jamie, and it’s a subtle reminder that even though Randall is dead, he’s a burden Jamie will carry for the rest of his days. 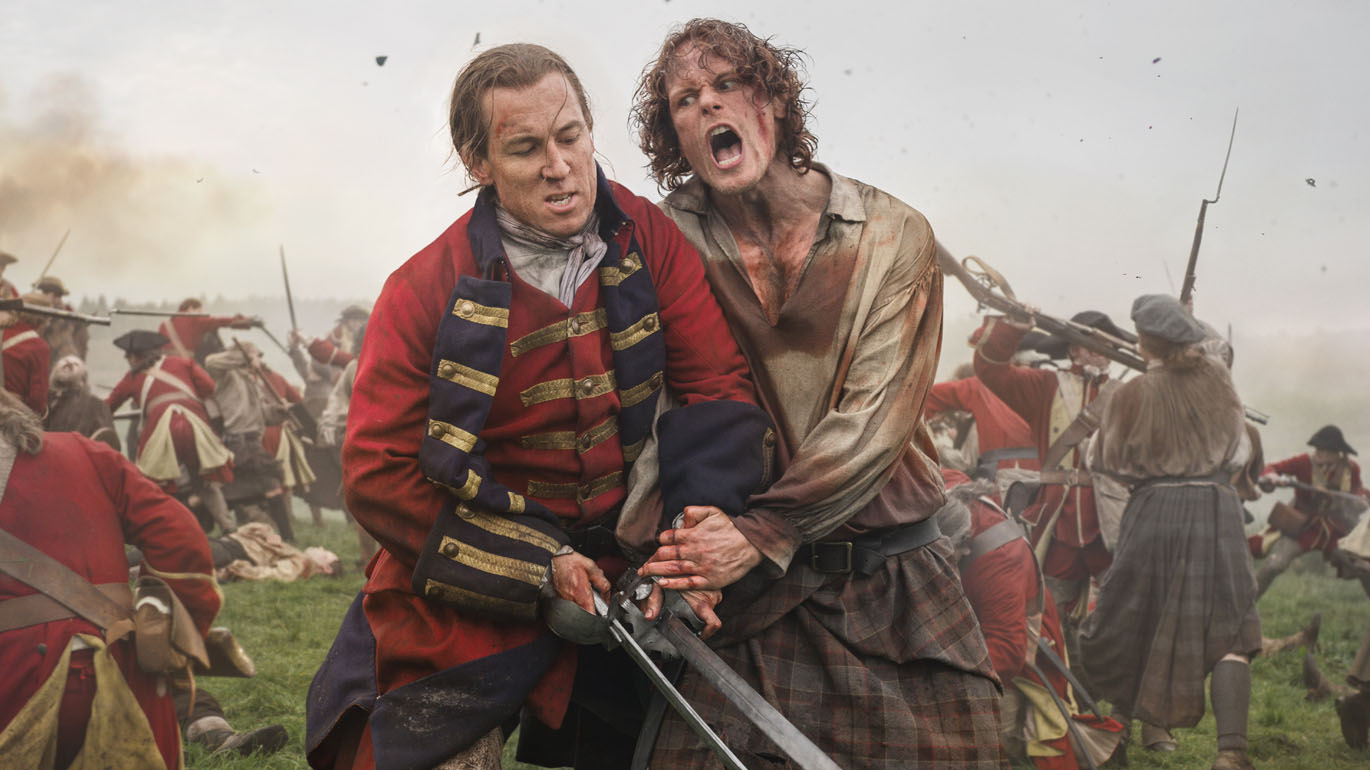 Rupert manages to find Jamie among the chaos, which is absolutely amazing given the amount of dead Scottish soldiers on the field, but hey, way to go, Rupert. I’m still sorry about Angus! Rupert takes Jamie and a few other injured soldiers to a barn where they hide out from the Red coats. They don’t hide very well it seems, as they’re set upon soon after. Lord Grey leads the Red coats and gives each of the surviving Scots honorable deaths because he’s isn’t a monster like Randall. Upon hearing Jamie’s name, however, Lord Grey learns that he’s the Scot who saved his little brother’s life, so he sends Red Jamie to Lallybroch in the back of a wagon.

It’s the only time Jamie shows emotion in the premiere, just as the release of death looms closer, Lord Grey wrenches it from him. Jamie knows that he should die like his brothers in arms, like the boys who weren’t given a pardon despite their young age, but Lord Grey takes that decision from him and now Jamie has to face the prospect of a life without Claire, friends, and purpose. Maybe with Jenny back in his life, he’ll have a renewed esteem for life, but I suspect that hiding from Red coats is a life Jamie no longer wants to lead.

Oh, Claire. Claire. Claire. Pregnant and in a new land with a man she doesn’t really love anymore who also happens to look like her worst enemy. It’s a shit situation, but if anyone can handle it, it’s Claire. At the end of last season, Claire agreed to live her life with Frank. She agreed to not talk about Jamie or the fact that she loved him more because she knew that life would be better for their baby with Frank. 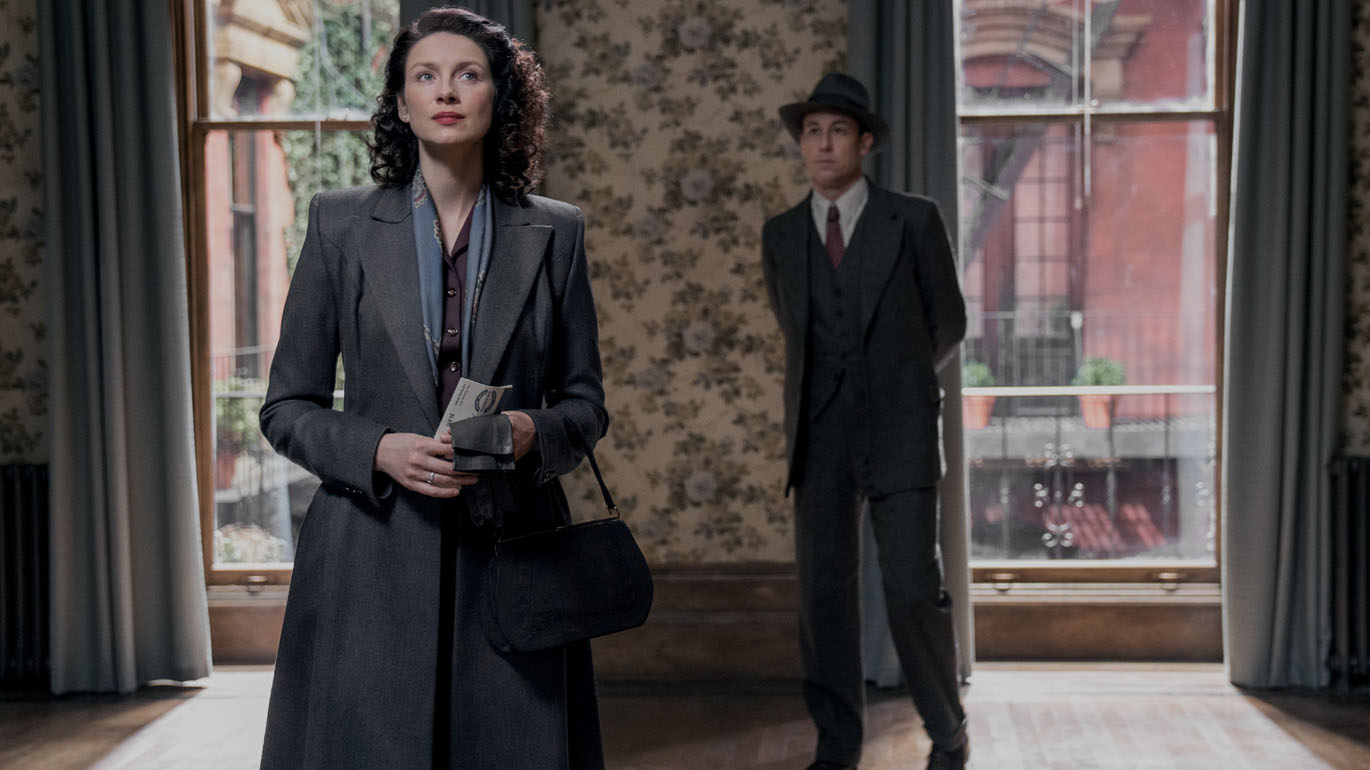 And that’s so heartbreaking because while it may be true, there’s a part of her that realizes she’ll never be happy in a world without Jamie.

Claire goes through the motions of being a dutiful housewife. She cooks, cleans, and stays beautiful so that she and Frank can keep up appearances. When Frank’s colleagues make snide remarks about women in traditional men’s fields, she almost loses her calm demeanor, but remembers that there’s a time and a place. It’s funny that Claire spent the majority of her time in Scotland earning the respect of men and now, in Boston, 150 years later, she’s still doing the same thing. It’s almost as if the feminist struggle doesn’t change overnight.

Claire tries to be okay with her situation, but she still flinches at Frank’s touch and her husband can’t understand why. He can’t understand that he looks exactly like his ancestor, the man who raped and tortured both her and Jamie. She snaps, wondering why she’s supposed to cherish her English history but not mention the last two years of her life, even though it’s killing her to keep quiet. Frank can’t understand and no matter how hard he tries to be sympathetic, their time apart will be a chasm in their relationship.

Claire goes into labor and the doctor is everything modern women fear. He’s sexist and brash, ignoring every one of her concerns, until he finally puts her under so they can deliver the baby, without her consent, via C-section. It’s terrifying for Claire, the thought of not being awake as she potentially loses another one of Jamie’s children. Thankfully, she wakes up and Frank walks in with their baby girl. They think all can well between them, as it was before, if only they focus on their baby. That is, until the nurse asks about the baby’s fiery red hair. 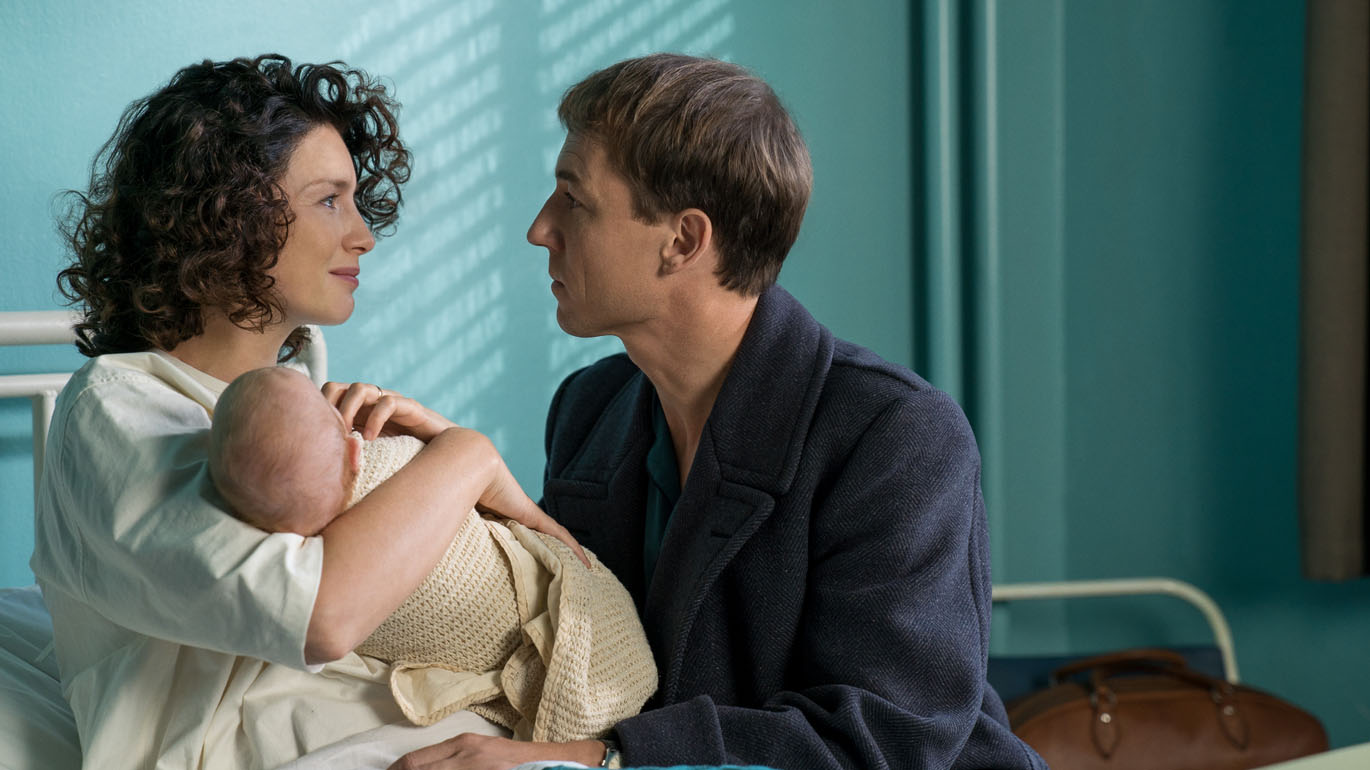 In a lot of ways, Frank gets the worst deal in Outlander. He spent years looking for his missing wife, a woman he adored, and she came back to him not only changed but pregnant with another man’s child. He still loves her, that much is plain, but it’s clear that he also doesn’t know how to handle her time traveling past. It shocks him to learn that Claire had been pregnant before and it’s another stab to the gut reminder that she’s not the woman he married years ago. But he figures that they got through a war apart once before, they can tread these waters, as well. 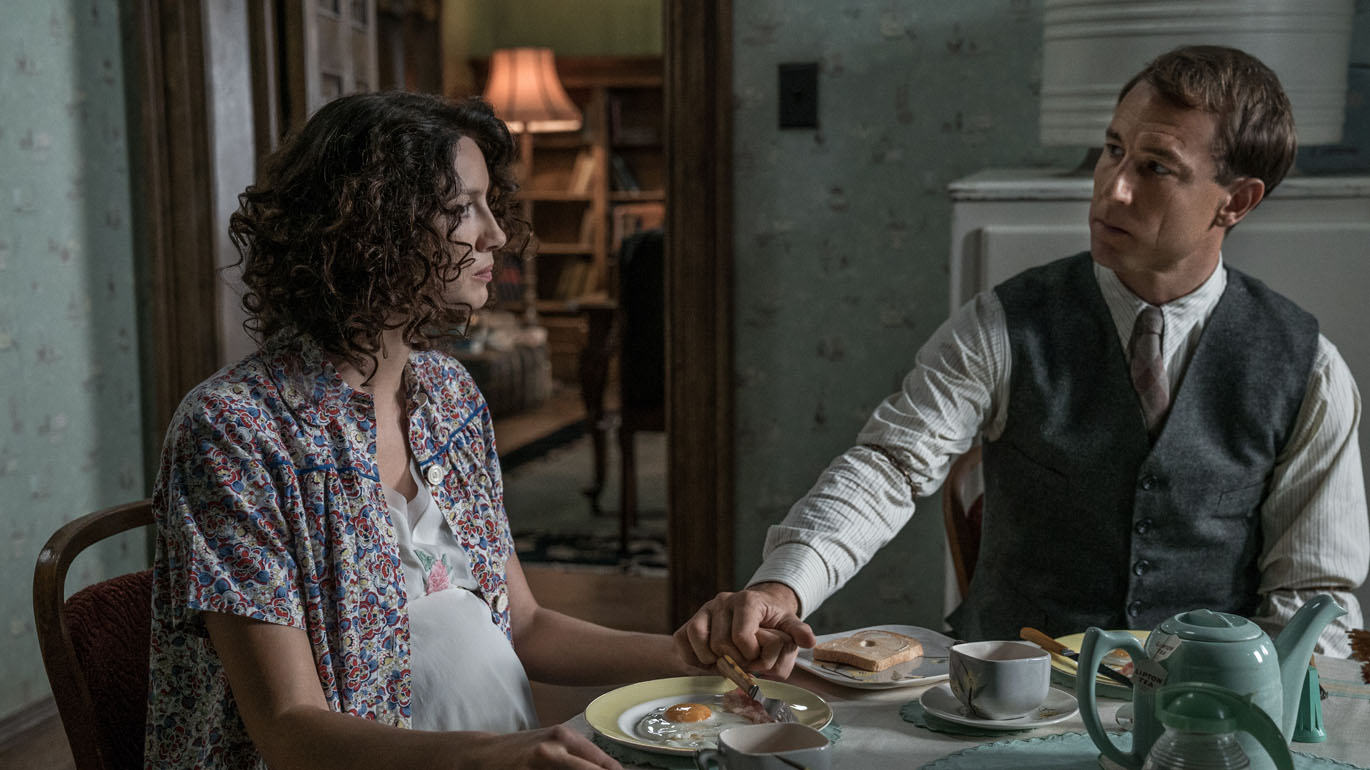 Frank Randall is a lot more likable than his book counterpart. Starz has taken the time to flesh out his rough edges while gently reminding viewers that Claire did love him at one point, too. Like Jamie, he doesn’t try to quash Claire’s outspoken nature, even when it’s directed at his colleagues. He can’t understand what she’s been through and it’s hard to consider he might never know, but he does try. Frank isn’t Black Jack, and Claire knows that, but he also isn’t Jamie, and that’s a tough situation for all three of them.

Season two’s premiere was hard to watch because Claire and Jamie spent the majority of the episode apart. That was nothing compared to “The Battle Joined” and it looks like it might be a while before the pair is reunited again. Outlander succeeds because of its slow burn, and I have faith in that process, so even though I miss the Frasers already, I know they’ll be reunited at some point. Some point 18 years in the future.

Is Randall actually dead? Boy, that’s a tough question to answer because I don’t really know if he is. He’s survived worse so I wouldn’t be shocked to see his face again, but on the other hand, I think it’s time for a new Outlander villain.

IS MURTAGH OKAY?! I NEED TO KNOW.