Briana is still pissed that she was unanimously voted into the elimination round. She is not buying into the “you come into a Challenge late, you go into the elimination” BS. It’s not HER fault that Ashley quit and that she was forced to arrive in late. It’s not like she asked Ashley to leave. Briana doesn’t seem to realize how flawed this logic is because if Ashley hadn’t left Briana wouldn’t even be on the show.

Meanwhile, Camila is dealing with the consequences of going rogue and not voting for Cory at the last second. Her defense is that due to everyone else voting for Cory, her vote didn’t matter. Tori to chimes in:

Huh? Tori’s comment is very straightforward which is kind of the opposite of being over thought. Since Camila has seniority over Tori she bitches to the camera that Tori should shut the hell up because her newbie ass knows nothing. 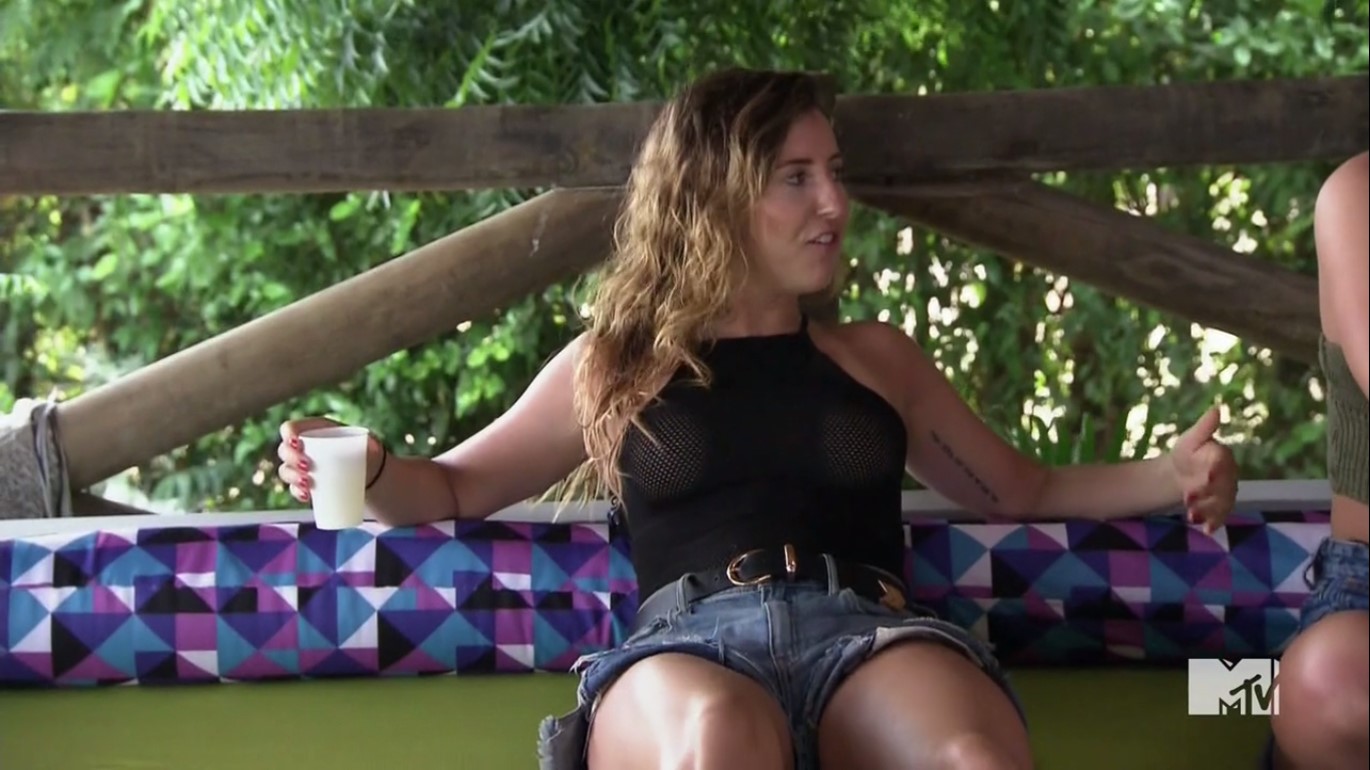 Camila also argues that the boys know that she would have voted for Cory if they really needed her to. Um, actually Camila, the guys don’t know that at all because Johnny is the next person to put in his two cents. He argues that Camila has more reason than anyone else in the house to vote in Cory because he essentially lost her the final in Invasion of the Champions. Camila has no good response to this either, and just flails her hands around telling Johnny to just sent he to elimination because “she doesn’t give a fuck.” Camila, sweetie, please be careful what you wish for.

Johnny: “[Camila] lost all trust and all integrity in this game.”

That is rich coming from Bananas.

The eliminations this season will take place in The Presidio where the game will get…. wait for it… even dirtier.

TJ explains how The Presidio work: To start the remaining players in the losers squad will have to draw a box from the Double Cross. The player to pick the box with two crosses on it is not only safe from elimination but also has to pick one of the remaining players in the loser’s circle to compete in The Presidio. This may be one of my favorite elimination twists ever.

When Dario draws the double cross, Derrick H perks up because “AYTO kids stick together.” Derrick H. wasn’t even on the same season as Dario! Dario actually has a relationship with Leroy, of course he is going to save his boy Leroy over this fool. Also, Derrick, there is no such thing as AYTO pride dude.

On the girls’ side, Veronica uses her female intuition to pick the double cross on the first go, and she sends Britni into The Presidio.

The final match-ups are:

The name of the game is “Balls to the Wall.” Each player is placed inside an open room with long sticks jutting towards them and fire balls on the other side of the wall. The goal is to pull those sticks really hard so they rip through the wall (the picture probably explains this better). 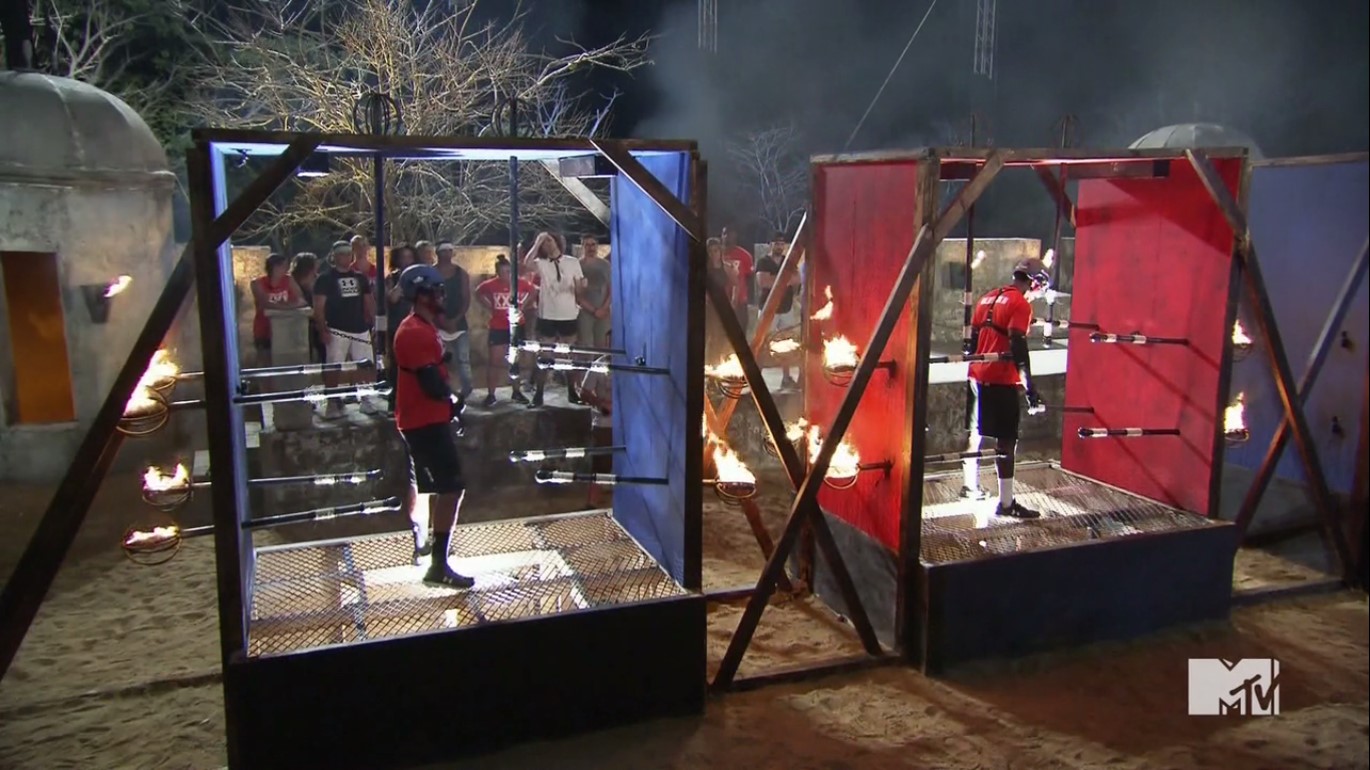 The boys are up first, and as Leroy points out:

Leroy: “The only people rooting for Cory are all 25 of the girls he slept with.”

What makes this line even better is that a few seconds later Camila confirms this when she reveals that she wants Derrick H. eliminated so they can break up the “power couple”. In what world are Derrick H. and Tori a power couple? Yes, so far Tori has been a beast, but Derrick H., not so much.

Nevertheless, Cory easily whoops Derrick H.’s ass, and we were subjected to what felt like an hour long tearful goodbye between the two love birds. I guess these two won’t be having that Challenge baby. I truly believe that Tori will be a better competitor without Derrick around.

The girls’ elimination was a lot closer than the guys, which seemed to be a theme this episode. In the end, Brit Brit pulls the fireballs from the walls quicker than Briana, and she swears to bring sweet vengeance against Veronica for the doublecross.

TJ brings the 22 remaining players to Plaza de Toros for their next challenge: The Battle Royale.

The game is played like this: There are two giant poles on either side of an X. Each team has to file through a small tunnel in to grab a ring on the opposite side and run it back to their original side. Each person is responsible for a ring and MUST bring one back (aka one person can’t bring back 2). Each team will consist of 10 people (5 girls and 5 guys) and there will be a girl heat and guys heat. 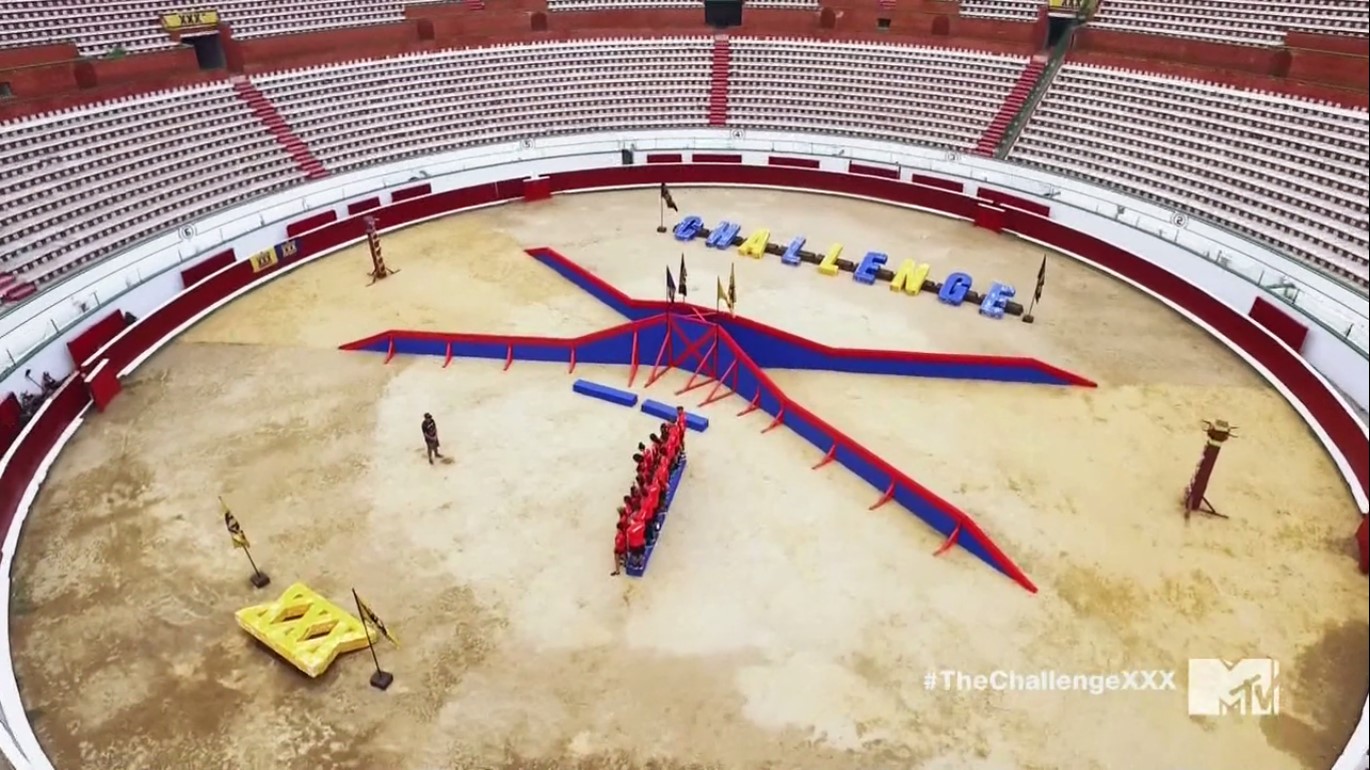 To determine the teams, Dario and Kailah were randomly picked to be team captain, and then tasked with selecting their teams. Since there are 22 players and only 10 spots per team, this also means that Dario and Kailah will decide which player of the opposite sex will NOT be competing in the challenge, thus automatically sending them to the losing squad.

Dario and Kailah have polar opposite strategies for picking their respective teams. Dario decides to go with the big tough guys, in order to block the other team from getting through the tunnel and Kailah picks the smaller more agile players. In the end, Ammo and Nicole are the two players not to be selected and forced to sit out of this challenge.

Like in the elimination, the girls’ match is much closer than the guys’. Jemmye is very confident in her abilities for this challenge:

Jemmye “I have alot of experience of bopping bitches on the head.”

The girls were neck and neck for most of the heat, and with 4 rings a piece they each were waiting for just one more. Those two rings were currently in a wrestling match in the middle of the course courtesy of Ms. Veronica and Brit Brit.

Once the girls untangle themselves, Veronica and Britni sprint to their respective pole with their final ring where Veronica beats Britni by just .06 seconds, bringing the win home for Dario’s team. I guess Jemmye’s bitch bopping was no match for Aneesa and Cara Maria who lead the charge against Kailah’s team in blue.