‘The Heart is a Lonely Hunter’ begins with the most joyful and magical image ever: Leroy spinning in circles on a Pink Flamingo in the pool. 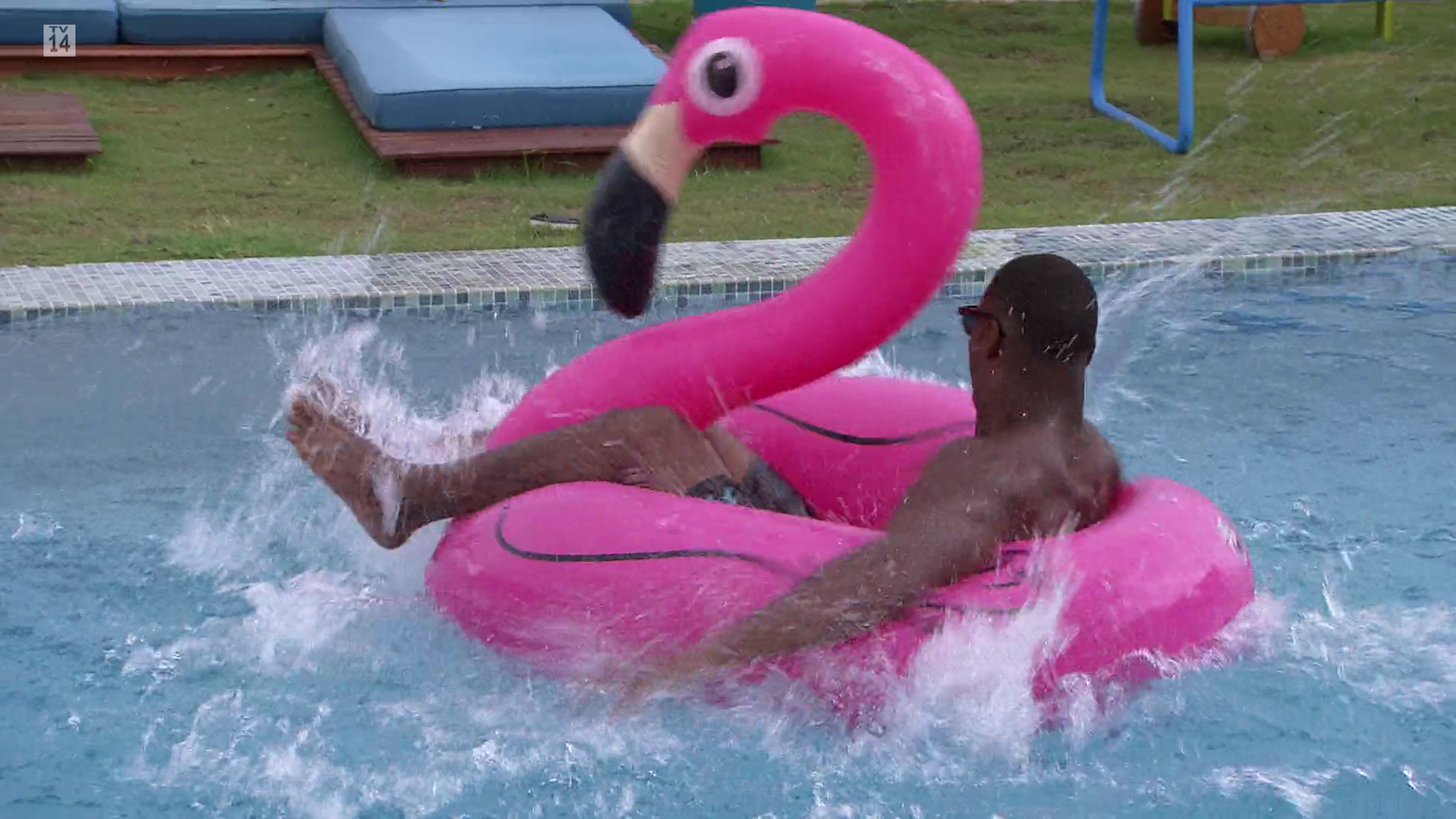 I could have watched Leroy on the floaty all day, but instead, they cut to the kitchen where Camila asks some of the girls if they find Johnny hot. All of them respond with a resounding “NOO,” claiming that Banana’s personality cancels out any feelings of attraction they may have for him and Camila is all like “yeah, of course, me too pshhh.” Look at Camila trying to act like she and Johnny didn’t hook up the entire season of Exes I.

Now onto the challenge… jk. After that pointless kitchen conversation, it is time to watch the cast mates call home. Dario calls his boo Ashley K from RW: San Diego (2011), Derrick calls his son, and Hunter calls his girlfriend only to get dumped. See, she is stressed out with him being gone, so she doesn’t want to date him anymore. Hunter is devastated, but he isn’t a quitter, so instead of going home to fight for his girl, he stays to fight for $350,000 ($1Mil). Knowing literally nothing about Hunter’s relationship, here is my take on this situation: if the person your partner is like “so I can’t handle you being gone, so this is over” it’s probably not a relationship worth going home to fight for? This girl didn’t even seem to want to talk things out, or anything. I’m still single though, so what do I know?

Saved By The Bell

This week’s challenge is “Saved by The Bell” (sans Zack Morris). The game is played in two heats, with two teams of four in each heat. Since there are 18 players, the two kids not picked are sent directly to the double cross. Aneesa and Hunter are two of the captains, and they each get to pick a second captain of the same gender. Hunter obviously sticks with his Buck, choosing Nelson, but Veronica is blindsided when Aneesa picks Britni over her. She assumes, correctly, that no one will pick her. On the guys side, Dario is the last man standing, probably because most people forgot Dario was even there. 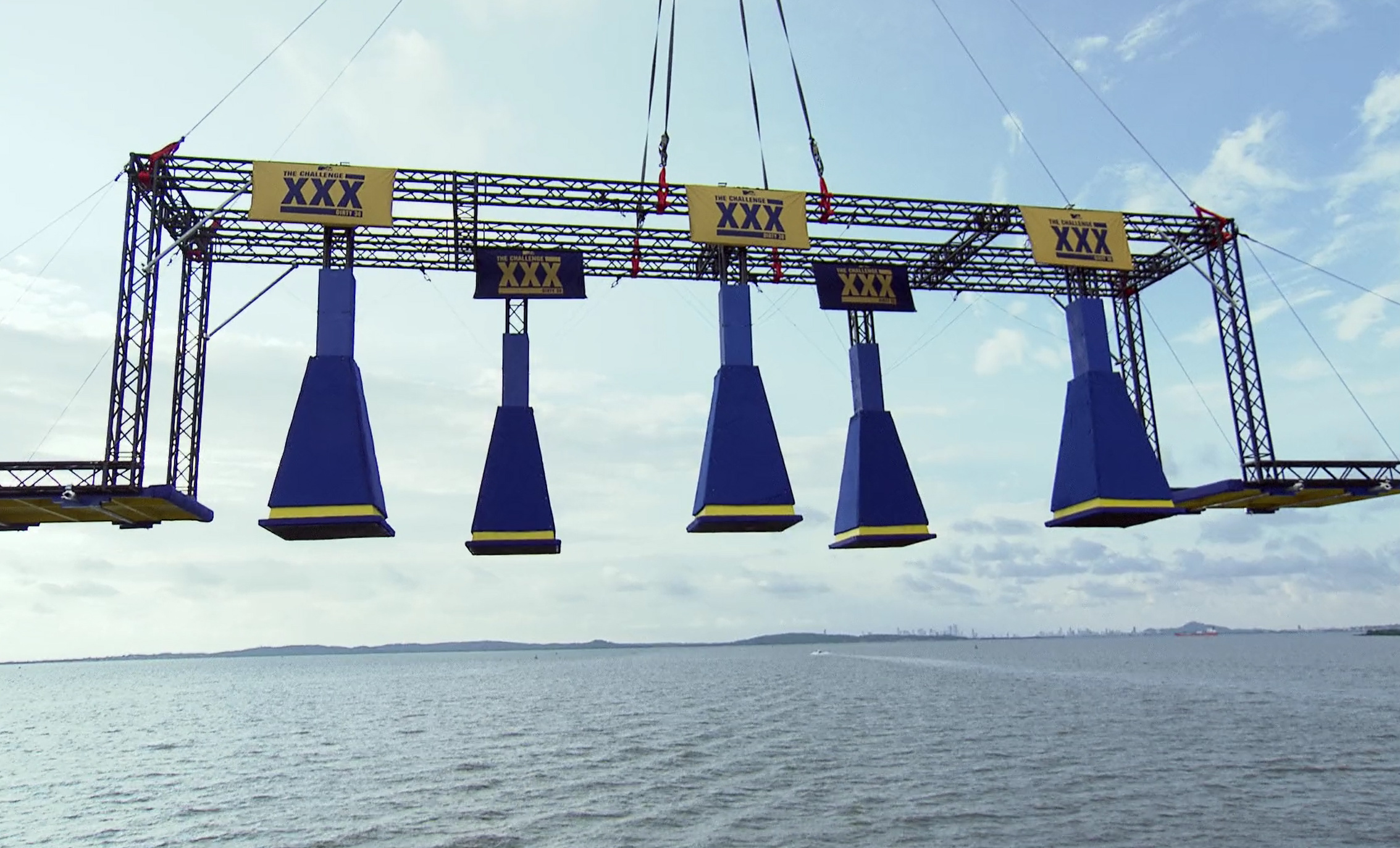 The goal of “Saved by The Bell” is to get as many of your players to climb across five bell shaped objects hanging 30 feets above the water, as fast as you can to get to the other side. The two teams start on opposite sides, and at a certain point, they will have to cross paths and share the same bell. The team that wins will be in the Winner’s circle, and everyone else goes straight to the Double Cross.

The heats are as follows:

The second heat is much more entertaining. First you have Leroy who is deathly afraid of heights, and can barely swim. While watching the first heat, he uses Aneesa’s shoulder for comfort, and asks himself why in god’s name he keeps putting himself in these situations. With the determination to not have his ass fall 30 ft into the water, Leroy hustles his butt across the bells and is the only person on his team to complete the challenge. The second reason that this heat was amazing was because JOHNNY FALLS making him the first member of his team to GET DQ’d. 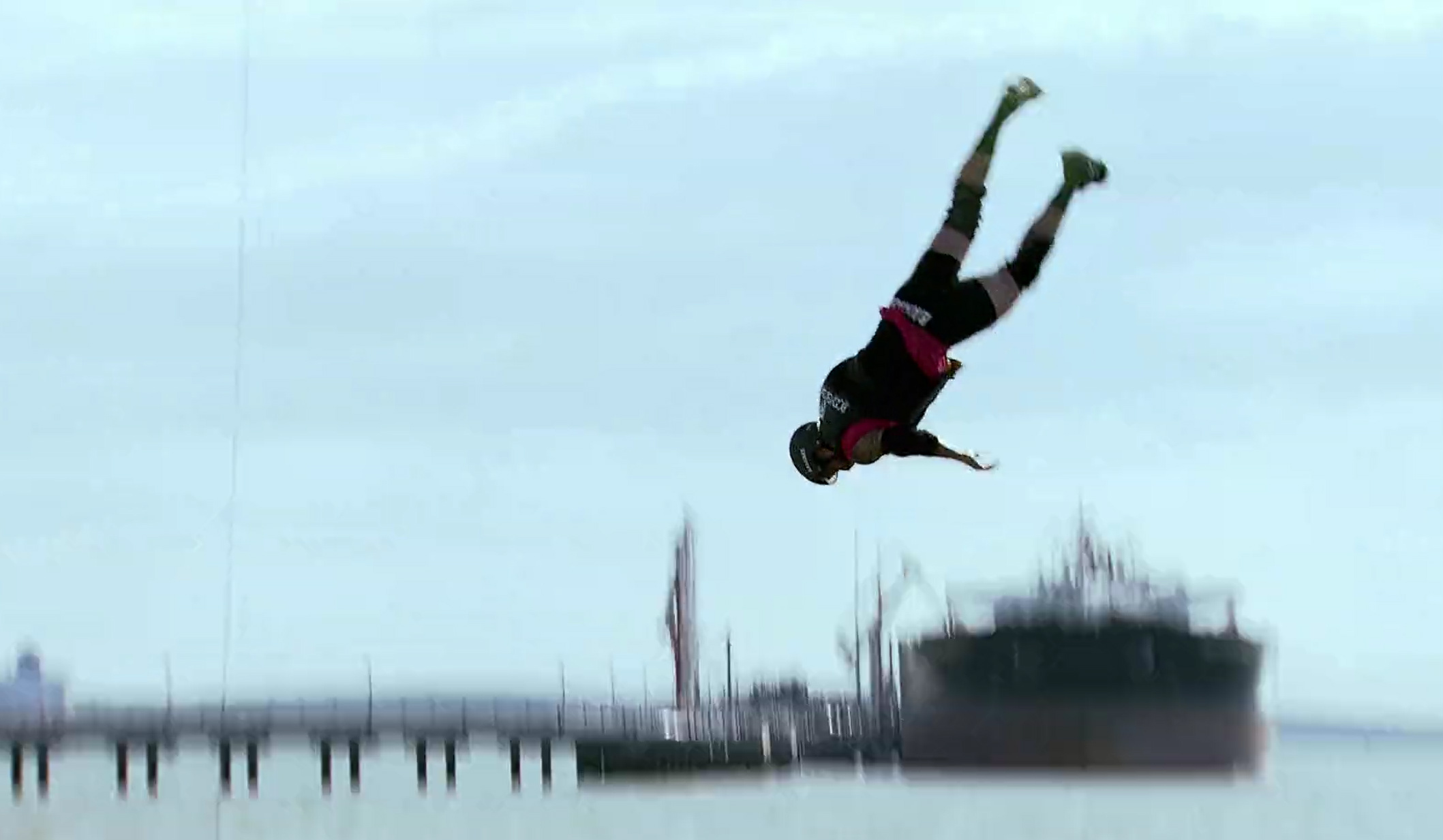 It was glorious watching him awkwardly tumble through the air and hit the harsh, cold, and wet water. After Aneesa also falls, Derrick and Jenna show what true teamwork is and make their way to the opposite platform together. Not only was Jenna the only girl to complete this challenge, but she was also one of only 6 players in total to get across, so big props to Jenna!

While both Team Hunter and Team Aneesa had two players complete “Saved by the Bell” CT and Hunter had the faster time, giving Team Hunter the win. During the post-challenge group interviews, though, a miracle occurred. A once in a lifetime event, as surprising and mystical as a unicorn spotting: Johnny Banana’s apologized to his team for falling and costing them the win. 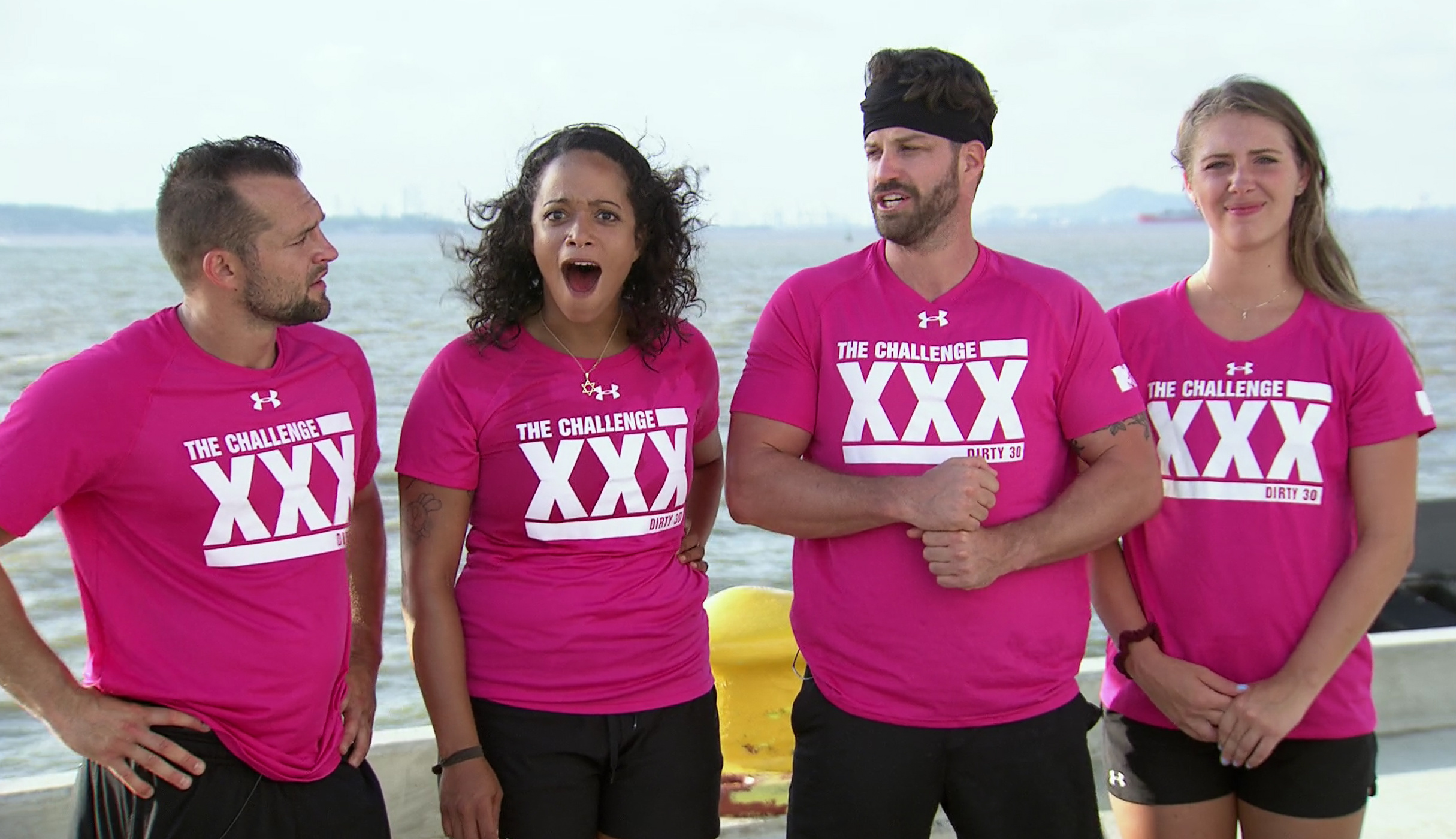 Another day, another challenge, another drunken fiasco. The first drunken blowup of the night is between Hunter and Kailah. Earlier in the episode, we learn that Kailah hates Hunter’s voice, and Hunter hates Kailah for not sleeping with him last season. In Hunter’s eyes, Kailah is the literal devil (aka Aneesa?). After Hunter gets a few drinks down, he decides to approach Kailah, tell her how he has “beat her man twice” and how Kailah is mad because Cory “chose Camila” over her. Umm, what? First, isn’t Cory one of Hunter’s closest friends in the house, why is he shit talking him right now? Second, as Kailah astutely points out, Cory is not “her man.” Thirdly, Cory didn’t choose Camila over Kailah. Kailah got sent home and since Cory is can’t go a day without banging a girl, he started sleeping with Camila. So, in a sense, Camila was really Cory’s sloppy seconds.

When everyone arrives at the house, it is Nelson’s turn for a drunken scene, making the Young Bucks 2 for 2 on this week’s Drunken Outburst tally. Nelson is incoherently ranting to Hunter about how he wants to go against all the vets in the elimination. Or something like that, I watched this scene multiple times and still couldn’t figure out what he was saying. Derrick and I were on the same page, because after listening from outside, he finally asks Nelson “Dude, what are you talking about.” This prompts Nelson to pump his chest, push and then finally punch Derrick. Aneesa, Camila, and Jemmye are able to separate the pair and Jemmye brings Nelson back in the closet. Once inside he tells everyone to check the cameras to prove that Derrick started the fight, to which Jemmye reflected the feelings of the entire audience. In the end, Nelson was sent home packing.

I have grown to like Nelson this season, but that doesn’t mean he isn’t the the same hothead he always was. This is a man who threw a temper tantrum and broke furniture during Invasion when Sylvia didn’t want to hook up with him. I think he is a good guy but he is immature and can’t handle his emotions. Does that excuse his behaviour or his actions, absolutely not. But it’s not like he stood there for hours yelling hateful, disgusting, and racist insults like some other cast members. I am sorry if you are tired of me bringing up Camila’s attack on Leroy again, but it’s not something I can just let go. I understand the rules say no physical altercations in the house and that Nelson’s single swing sealed his fate, but is what Nelson did worse than what Camila did? Did Nelson’s behavior create a more unsafe environment than Camila’s. I think it is important to think back to Simone. Simone wasn’t sent home because she scratched Shane in self-defense, she was sent home because she waved a broken glass bottle around in a threatening manner. Wasn’t that what Camila did when she was threatening to throw the dumbbells she was waving around? I will never understand productions handling of Camila’s racist outburst.

With Nelson gone, Jordan and Dario are the only two names on the chopping block on the guy’s side. For the girls, Jemmye, Veronica, Aneesa, and Britni all had their names tossed around. We will have to wait until next week to see who is sent in to the Presidio.

Previous article
‘Outlander’ – “All Debts Paid”: Prison Comes In Many Forms
Next article
‘The Good Place’ Review: Oh THIS is The Bad Place