The competitors return back to the house after six players were eliminated (sent to the Redemption House) in The Purge. Everything is calm and peaceful with a side of liquor when the ground around them starts shaking. CT has arrived causing every male contestant to shit his pants! As Johnny says so eloquently, CT is “a legit game changer.” Alongside CT is Briana, who is to serve as Ashley’s replacement. If you remember Briana was forced to leave Rivals III when her partner Brandon wimped out and quit. So, Briana has a lot to prove this season. 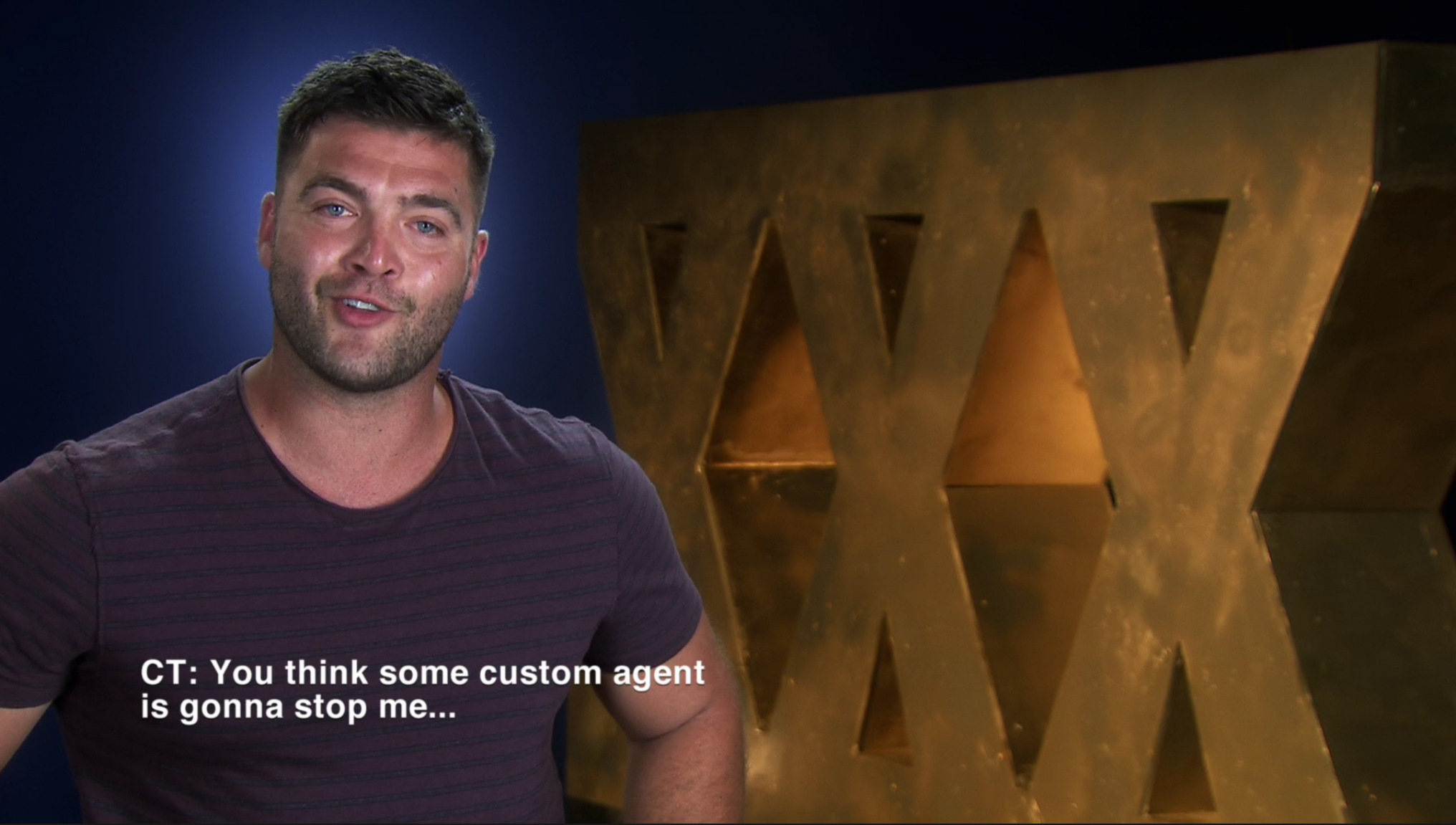 While CT and Briana’s arrival creates quite the stir, it isn’t the main attraction of the night. That billing goes to Mr. Playa Play: Cory. As I have stated before, I am fully aware of the dubious nature of reality TV editing. That said, the show tries to imply that Cory had a talk with Kailah, a kitchen make-out session with Aneesa, and a beach bang with Camila all in one night. Everyone denies everything, so who knows what really happened but after reading Aneesa’s tweet, I rewatched the scenes and the footage aired shows her and Cory talking, not kissing. What happened on the beach between Cory and Camila, no one can be sure of.

Regardless of what actually happened, it is shit like this that makes me hate Cory:

Cory: “I give any guy credit to be in this situation. To have 3 girls you’ve had relations with– Kailah, Aneesa, and Camila– all living in one house and play this game and try to survive.”

Dude, you are in a mess of your own making! Am I supposed to give you credit for having to deal with your actions from previous seasons? I would also like to note that you are not the only person this season to be living in a house with three former hookups. In case you forgot, Camila has hooked up with Bananas, Tony, and, well, you, and you don’t see her complaining (which is surprising because usually, Camila complains about everything… more on that later).

The name of the game this week is “Cool Under Fire.” The game will be played in two heats with players sitting against a wall, on a small ledge, that is elevated 30 feet above the water. Every so often the wall will be tilted making it harder to stay put. The first two men and women to fall from each heat are in the loser’s circle (8 total), and the two men and women to stay seated the longest are in the winner’s circle (8 total). I forgot to mention the best part of this challenge though! When it’s not your turn to compete YOU GET TO SLING SHOT DIRTY ROTTEN TOMATOES AT THE PEOPLE ON THE WALL!

The four losers from the first round are Veronica, Jemmye, Derrick H. (who falls the second the horn blows), and Cory. The remaining players still seated are forced to endure dirty rotten tomatoes being flung at them left and right and no one is less happy about this than Cara Maria. See, Cara is stuck between two prime tomato slinging targets, Jordan and Nelson and whenever someone’s aim in off while targeting these two guys the dirty rotten tomato ends up hitting her. It’s all good though because she ends up winning the round alongside Derrick K., Nelson, and Nicole.

The second heat is where things get a little more heated. Before the challenge began, TJ told the players that there were safety ropes that they could use to position themselves, but once the horn is blown, they cannot use them. So, when Aneesa grabbed onto those safety ropes when she heard someone scream “we have our winners” only to find out that was only about the guys, Camila starts freaking out. Even though Aneesa stayed up longer on the wall than Camila, she knows that she might be in trouble. Unfortunately, Aneesa guessed right, and TJ gives Aneesa’s win to Camila, along with the other winners of the heat CT, Johnny, and Tori.

Aneesa is upset but realizes that she fucked up and accepts the consequences. Camila on the other hand gloats and says that when she messed up in past Challenges she had to face the consequences. Wait, she can’t be serious right now. Does she not remember her utter and epic meltdown in Rivals III when she “accidentally” threw Nate and Christina’s token aside causing them to come in last place. When Camila found out she was DQ’d she started sobbing, screaming that it was an accident, it isn’t fair for her to be DQ’d, and she even started yelling at TJ. Meanwhile, Aneesa acted like a fucking adult, realizes that she made a mistake and doesn’t cause a crazy insane scene.

The 8 winners are then tasked with voting in a guy and a girl into the elimination. Anyone who is not in the winner’s circle is vulnerable to be sent in. Even though this is not a group challenge, the winner circle gathers together to discuss who they want to send in. For the girls, it is an easy pick: Briana. She is new, she got to sit out of the purge, and also she is new. The guys pick gets a little messier though. Almost everyone agrees that after sending Darrell home last week, Cory should go into elimination. This is partly because the Vets are worried that Cory is out to get them, and partly because EVERYONE LOVES DARRELL!

Everyone besides Camila and Nelson were on the “Send Cory In” train. It makes sense that Nelson wouldn’t want to send in his boy, but Camila’s reasons are not really clear at. Camila makes things even worse for herself during the actual voting process. When it is her turn to cast her vote, she starts lamenting about how she guesses she “has” to vote for Cory, to which TJ responds “Um no dumbass, you can vote for whoever you want,” and Camila quickly changes her vote to Hunter. Camila’s justifies her decision to NOT vote for Cory by saying “this is not a team competition” and calls the other girls who voted with the boys “stupid” for doing the guys bidding. What world is Camila living in right now? Everybody knows that they key to surviving an individual competition like this is to have a strong alliance. So yeah Camila, you can do whatever the hell you want, but you also have to deal with the consequences aka losing the trust of basically everyone in the house.

So going into the elimination is Cory and Briana, but we will have to wait until next week to see who they will be competing against.

TJ pays a visit to the Redemption House to explain to last week’s six eliminated that they are now in the Redemption House. Essentially at some point these guys will be given the chance to get back into the competition, but when and how this will happen is going to be a surprise.

Darrell: “This game has changed. I’m not used to all these damn twists. It’s like I’m in goddamn Willy Wonka Land.”

Seriously, this must be Darrell’s hell. He is forced to live with five fools at least a decade his junior with no contact to the outside world. I can’t imagine anything worse. I’m convinced that Darrell only spends time with his housemates when production forces him too. There is no other reason he would subject himself to sitting in on this ridiculous tarot card reading Simone has concocted, where Simone predicts Shane would get punched in the face… which kind of comes true. 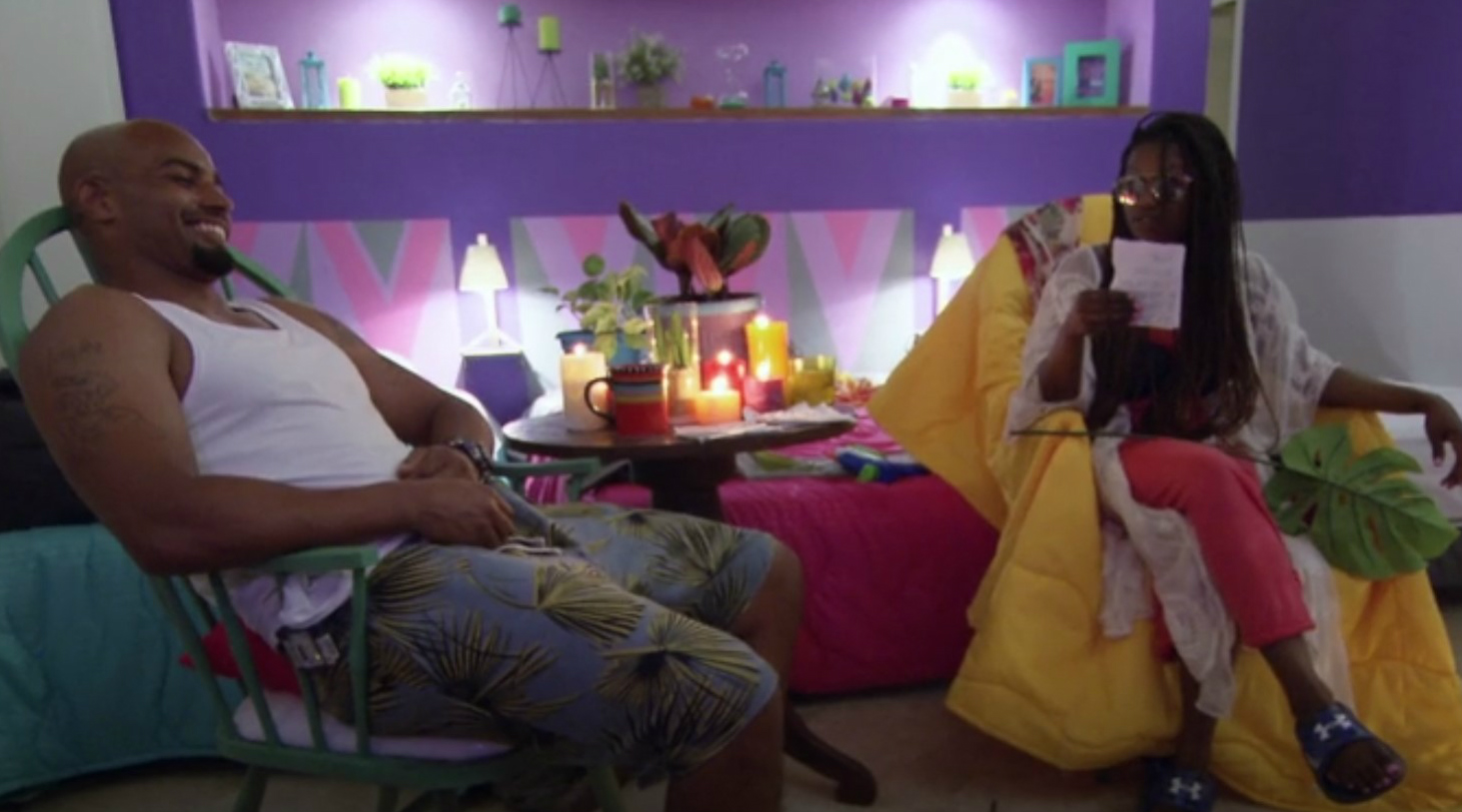 One night Simone gets upset when both Shane and LaToya decline to grease her scalp. Simone reasons that since she does so much for everyone in the house ( cooking and cleaning dishes) they should help her out in return. While Simone cleaning the house for everyone is a nice gesture, it is not a quid pro quo. You CHOSE to do those things, your housemates didn’t force you to do them, so you shouldn’t force them to feel guilty that you did.

Later that night after production decided that these kids were too boring to keep the cameras rolling, a fight erupts between Simone and Shane. According to Devin, Shane wanted to put in a last word with Simone re: Greasing the Scalp and Simone wouldn’t let him. This resulted in Shane slapping Simone twice in the face and Simone scratching Shane’s face. Additionally, Shane bit Devin’s arm as he tried to pull Shane away and Simone broke a champagne bottle and waved it around like a shiv. And that is the story of how Shane and Simone got kicked out of the Redemption House and sent home.