‘Outlander’ – “All Debts Paid”: Prison Comes In Many Forms

This week on Outlander: MURTAGH YOU BEAUTIFUL BEARDED MAN, Jamie meets an Older Lord John, Claire and Frank continue to have marriage issues.

It’s been a long road to Claire and Jamie finding one another again, but boy does Outlander make it feel worth the climb. In “All Debts Paid”, Jamie spends years imprisoned at Ardsmuir while Claire spends years in a loveless marriage to Frank. Both have their hardships and it’s clear through it all that even without saying the other’s name, they’re constantly thinking on the love they lost. But it’s also an episode where Jamie and Claire lose the debts they once owed to others. Jamie no longer owes Lord John his life and Claire is no longer to Frank.

Jamie: Back in Prison

Years after surrendering himself to the Redcoats at Lallybroch, Jamie is in Ardsmuir Prison and he’s become a bit of a political figure. The guards are scared of him and the inmates respect him as a Chief. Because of this, the Governor of Ardsmuir dines with Jamie every week to address prisoners’ complaints. Presumably to keep them from completely overrunning the castle ruins.

Lord John Grey appears, but he’s no longer a boy being used to give up precious information regarding the Redcoats battle tactics. Lord Melton, John’s older brother, spared Jamie’s life, and John is aware of the power a man like Red Jamie wields. But in some ways, Lord John is still a young man looking for glory in the British army. He hears a tale from Duncan Kerr about French gold sent over from King Louis and knows he’ll be a made man if he hands it over to the crown. He tries to employ Jamie to give up the information from Duncan, but Jamie, still very much in love with Claire, hears the rumor about a “White Witch” and he has to know for sure.

Sam Heughan has been phenomenal at portraying the small moments with Jamie. Alone with Murtagh, you can feel his pain when he mentions the “lass who was a healer.” Even Murtagh isn’t blind to Jamie’s pain, but he goes along with it, not saying Claire’s name. In fact, Jamie never says Claire’s name aloud. It’s a thing he does to try to push her from his mind, but it fails once he hears about the “White Witch,” and hope of her living on the island spurns him into action. 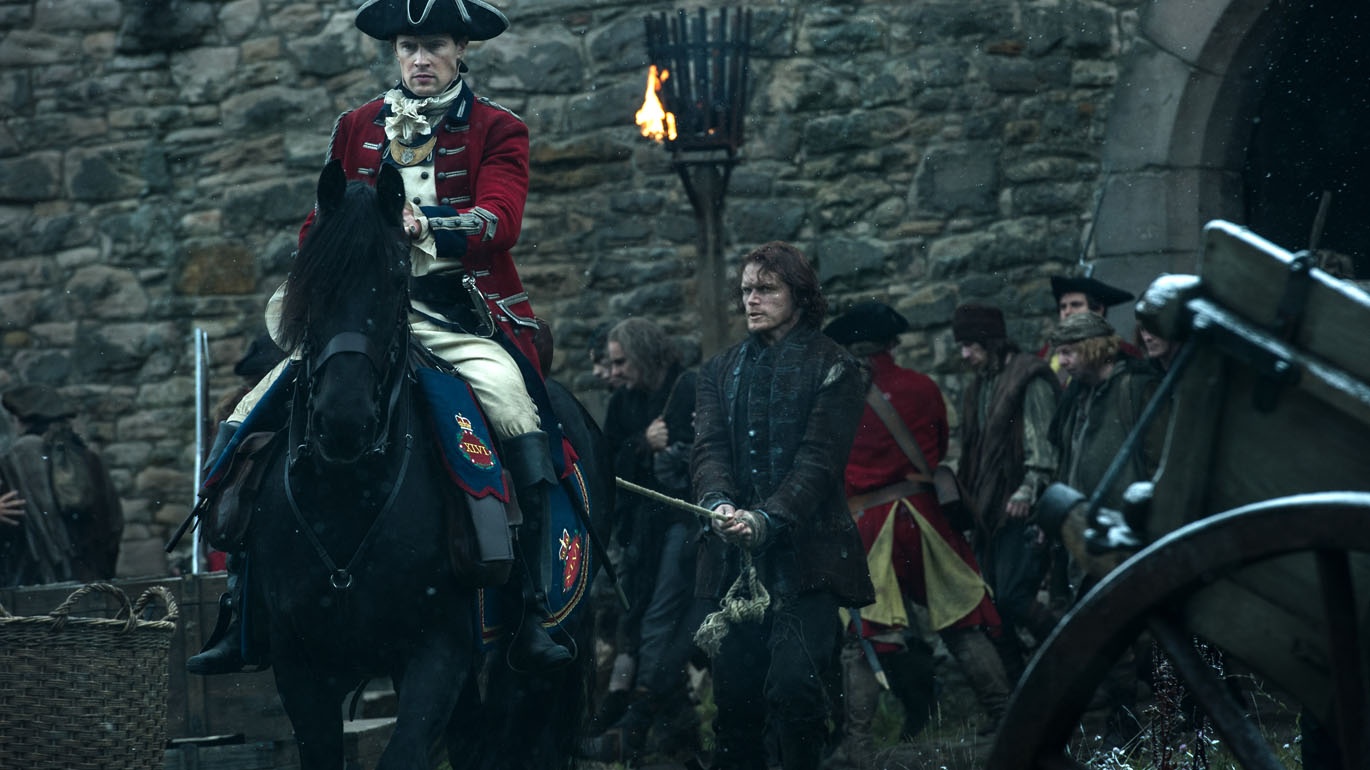 Of course, Jamie doesn’t find Claire, and instead of escaping the prison for good, he returns to Lord John, heart deflated, ready to surrender himself to the end. Jamie has been ready to die since the end of Culloden, but for whatever reason, honor debts refuse to let that happen. Jamie pleads for death in the only way he knows how, but using Lord John’s own words against him, but Lord John has become smitten with Jamie and his honor, so he refuses. Jamie is forced to face life without Claire. Again.

Jamie finds a kindred soul in Lord John. They continue their weekly dinners, bonding over their pasts and a love of chess. Jamie doesn’t mince words with Lord John and it endears the Governor to him more. Only when Lord John tries to offer comfort to Jamie does the relationship become uncomfortable, nearly hostile. Lord John touches Jamie’s hand and leaves it there, a gentle caressing touch of sympathy. But to Jamie, it’s a manipulative act, reminiscent of Black Jack Randall, and his demeanor turns. It’s a credit to Heughan’s acting ability that he takes his time with Jamie’s moments. He allows the character to display his internal dialogue without words. Slowly, Jamie’s face transitions from happiness to confusion to anger. He doesn’t lash out at Lord John, but he does make his feelings known through gritted teeth. He understands that good emotional acting doesn’t have to be loud and harsh, but it’s more effective to let the quieter words simmer.

In the end, Jamie tells Lord John about his relationship with Claire, how he had used her to get information from John as a young man, and it strengthens their bond. It’s clear that Lord John, a gay man in the 18th century, has feelings for Jamie. It’s what leads him to take Jamie to Helwater instead of shipping him to the colonies with the other prisoners (and Murtagh!). Jamie seems grateful for Lord John’s kindness but I can’t help but wonder if he isn’t still trying to find ways back to Claire.

Claire: Marriage Isn’t For Everyone

While Claire isn’t dealing with the physical torture that Jamie faces on a daily basis, she’s living in her own kind of a prison, one where she’s married to a man she no longer loves, trying to forget that the real father of her child is dead in the 18th century. Because Frank is acutely aware of Claire’s ever-present feelings toward Jamie, he suggests they have an open marriage, one where he can get the love and affection he needs without being reminded that his wife doesn’t love him.

It’s broken situation for both parents. They stay married only for the sake of Brianna, but all the while they emotional torment the other. Frank reminds Claire at every turn that she’s to blame for the situation and Claire never gives Frank a chance to help her heal. They’re both bitter and the one who really suffers is Brianna, being raised in a family where her affection becomes currency. Frank buys her love with cars and then reminds his daughter that her mother works all the time.

I wish we could have seen more tender moments between Bree and Claire when they were younger. It’s obvious that Claire puts her work first, using it as an escape from her current situation, but it’s also hard to believe that she would outright ignore Jamie’s child, too. Frank loves Bree, that much is clear when he refuses to divorce Claire for fear of losing his daughter, too. But he’s also manipulative and spiteful where his daughter is concerned, to a point where it makes him wholly unlikable. 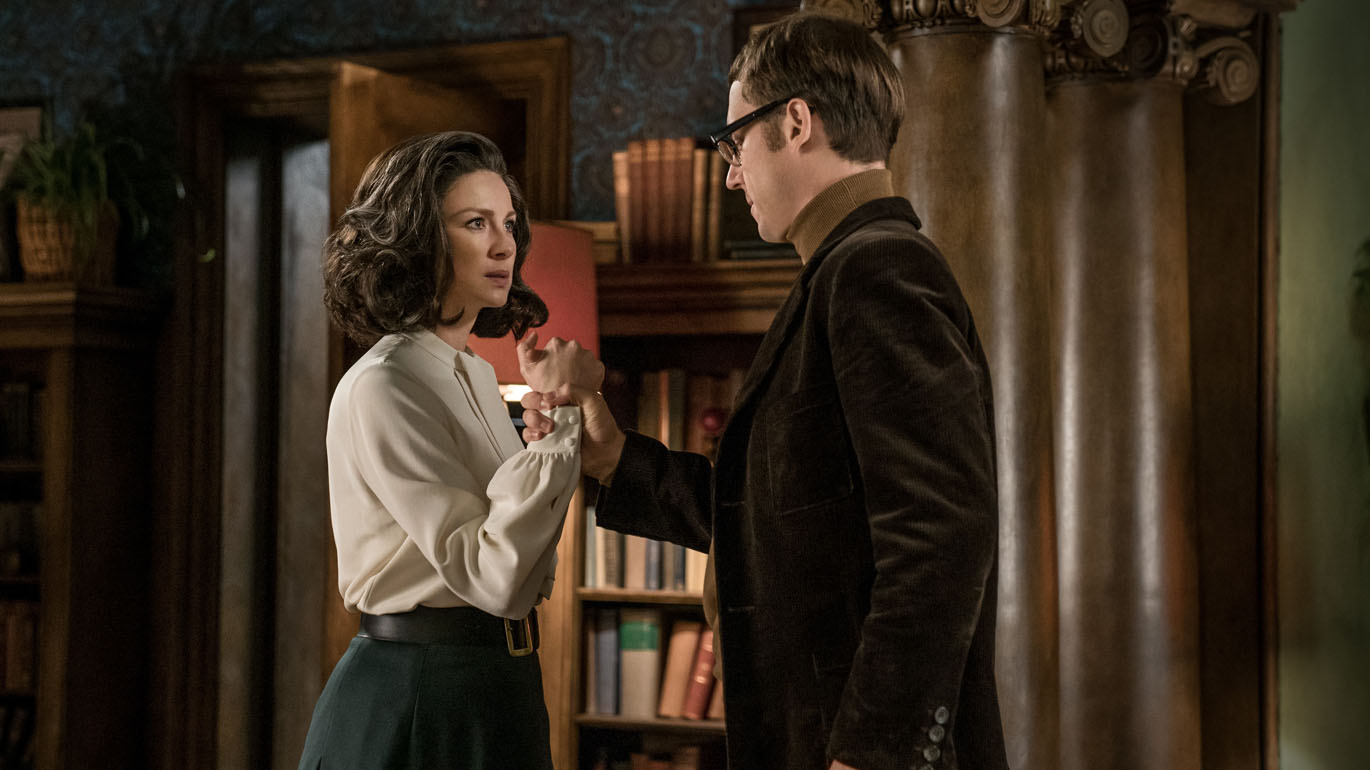 Claire’s predicament in 1960’s America is one that rings true for mothers even now in the modern era: how do you balance work and family without sacrificing either? Frank never worries about being seen as an unfit father if he works all the time, but it’s a balance Claire is forced to strike so that she isn’t seen as a poor mother. Like many other Outlander episodes, “All Debts Paid” does a good job of touching on these issues that still plague modern women by using Claire’s perspective as a familiar lens. Her romantic distance forces Frank to seek affection elsewhere. Her work ethic damages their family life. Her feminist need to break ground in new areas is unsightly to Frank’s male coworkers. They’re moments that won’t gain as much traction as Jamie’s action-packed past, but they’re no less important.

After a particularly brutal fight following Bree’s high school graduation, Frank asks for a divorce and tells Claire that he, his fiance Sandy, and Bree, will be moving to Oxford. Frank then asks:

Frank: “You couldn’t look at Brianna without thinking of him. Could you? Without that constant reminder. Him. Might you have forgotten him, with time?”
Claire: “That amount of time doesn’t exist.”

It’s a heartbreaking moment for Frank, knowing that he could never compete with a ghost. But even more than what’s unsaid between them is how Frank often reminds Claire of Black Jack Randall. Because Frank never allowed Claire to talk about her time in the past, he never got the chance to understand what she went through and why she flinches at his touch. Instead, he thinks that she only fell in love with another man and then got pregnant. I wonder how different their marriage might of been had Frank tried to talk as openly with her as he did the night they honeymooned in Scotland all those years ago.

In the end, Frank is killed in a car crash, which leads Claire and Brianna back to Scotland. It’s a sad moment, to be sure, thinking of what might have been for the two, but it’s also a moment that feels too easy. Claire would have stayed loyal to Frank for the rest of her days, tethered to him because he honor somehow demanded it. I have no doubt that she would have never chosen to leave him and that thought breaks my heart for her.

MURTAGH LIVES! Oh thank goodness he didn’t die on the battlefield. I am so glad that Outlander decided to keep Murtagh around and even if he is sent to the colonies, I can’t wait for him to be reunited with the whole Fraser family.

I’m going to miss Tobias Menzies as Frank/Black Jack. It’s not easy playing one character well, especially all of the nuances that go into them, but he played both very well. And he slipped into the Black Jack tendencies so easily as Frank that it was a joy to watch.

The Lord John Grey casting is PERFECT. I love everything Berry brings to the table. We haven’t lost him just yet, as he’ll be in next week’s episode as well.

I wish we could have seen more of Claire’s doctor background, as well as her friendship with Joe Abernathy. Maybe that will come with time since the focus was mostly on Frank before he died, but I’d like to see more of her life without Jamie that isn’t just about Frank.

Caitriona Balfe has no chill, even when it comes to calling out Starz. I love her. 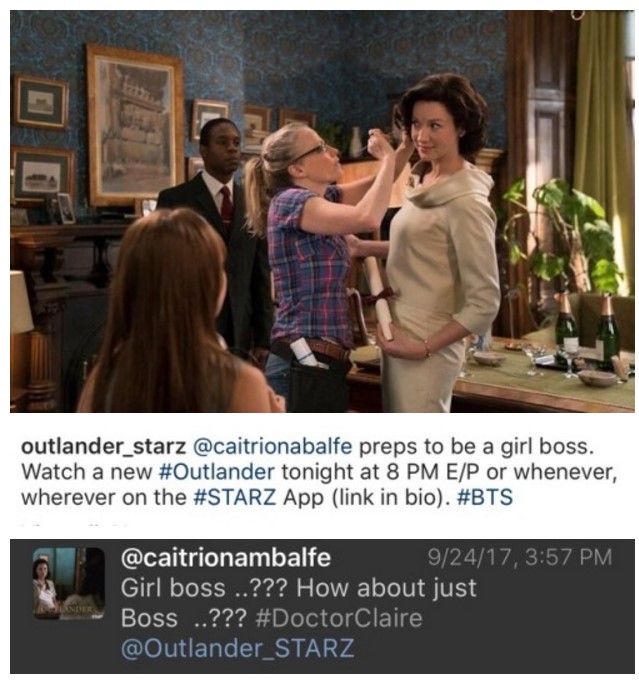