‘The 100’ – “Perverse Instantiation: Part Two”: Save This Broken Heart

This week on the season three finale of ‘The 100’: Get in losers, we’re going to the City of Light.

Picking up where Part One left off, The 100 finale was a whirlwind of every emotion on my radar. In a season that has separated both fans and characters, the finale brought everyone back together, even my beloved, Lexa. It was a much sweeter affair than most were anticipating, but I, for one, am happy with being able to celebrate the groups victories in this broken world.

With Ontari brain dead, the delinquents were out of options for getting A.L.I.E. 2.0 into a nightblood. Clarke saving her mother from A.L.I.E. with their one-time-use EMP initially felt like an emotional response to Abby’s near-death experience, but Clarke is anything but driven by her emotions. Instead, she rescues Abby from ALIEKRU in order to use her medical skills so they can perform a similar blood transfusion to what Mount Weather did in season 2.

I appreciated the parallels to The 100 season 2 arc, with what Clarke et al were willing to sacrifice to save everyone. Clarke risks not just her life but the lives of everyone when she inserts the 2.0 chip and then in true Bellamy fashion, he takes the blame from everyone else by being the one to give Clarke the 1.0 chip. Even though Clarke was the one to enter the City of Light, the one to accept the night’s blood and the chips, I appreciate that Bellamy is still her equal when it comes to making decisions.

Clarke enters the City of Light and she revels in its immensity, the beauty of the towering structures, but it doesn’t take long for things to go kaput as Ontari’s body begins to fade, taking Clarke’s life source with her. Abby and Murphy are forced to act quickly and restart Ontari’s heart, with Murphy begrudgingly acting as heart pump.

Things head south for Clarke in the City of Light. A.L.I.E. begins to update her programming which means that those inside the City can now see her. Luckily for her, a familiar face comes barreling into the action with her dual swords kicking ass. LEXA. OH MY GOD LEXA HOW I HAVE MISSED YOU.

There were rumors about Lexa (Alycia Debnam-Carey) being on set for the finale, and I speculated that Lexa would appear in the City of Light, but seeing it play out, I couldn’t have asked for a better reunion. I desperately want Lexa back on the show, desperately want her and Clarke to be happy, but since I know I cannot have those things, I will settle for this epic send off. In the span of about ten minutes we were treated to more romance and hugs than we’ve had all season and I know that’s in no small part due to outcry over Lexa’s death.

As ALIEKRU closes in on Clarke and Lexa’s location in the City, Jasper makes an appearance to try to stop them from moving on. Just as Jaha surrounds them with his mob of angry men, Raven makes a clutch appearance, offering Clarke a back door into the room with the killswitch. With too many of ALIEKRU around them, Lexa sacrifices herself to save Clarke, yet another selfless act from her. The two share a heartfelt goodbye with Clarke finally breaking down that wall and telling Lexa she loves her. It’s the moment we’ve been waiting for between these two and I’m not crying, you’re crying. 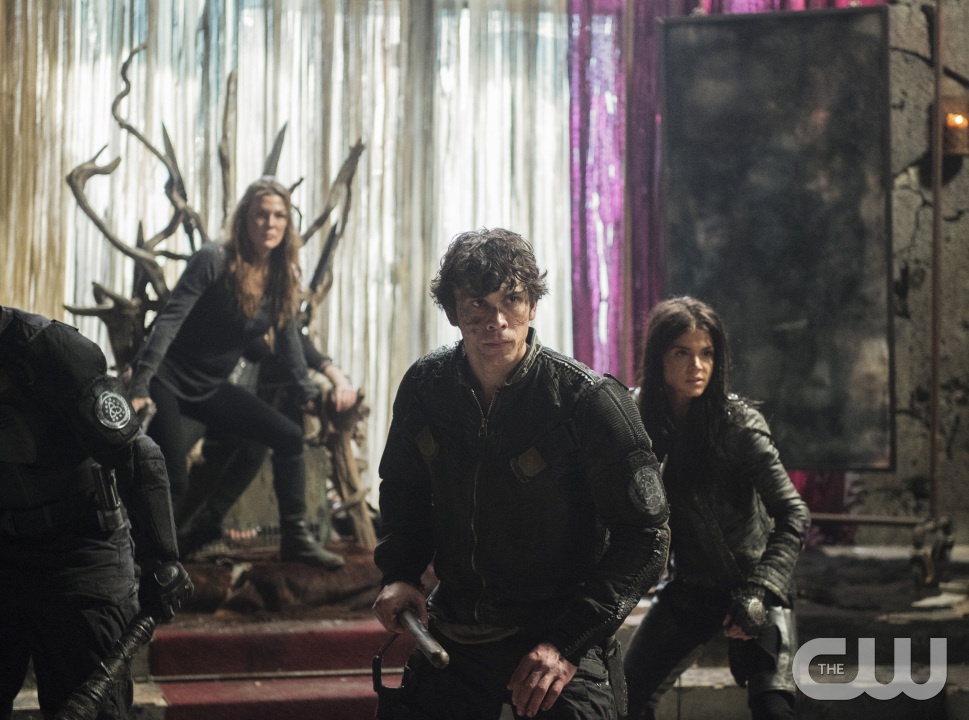 Meanwhile, in the real world, ALIEKRU climbs up the side of a freaking building to get to the delinquents. Led by Kane and Emori, the group breaks through their defenses because Octavia can’t cool her lust for revenge for ten seconds. Not that I blame her. If I had someone like Pike telling me we needed to work together after all he’d done to divide Skaikru, I’d cut him, too. When Pike tries to find reassurance with Bellamy, our boy B responds,

“I let my need for revenge put me on the wrong side… I wanted to see things like you. I needed that, to believe that they were bad and we were good, but I don’t know what to believe anymore. I just know I have to live with what I’ve done.”

Anyway, Bellamy defends against ALIEKRU using the ol’ Pikachu method by electrocuting some water but still it doesn’t stop them from making it to the throne room. The group fights, friend against chipped friend and it HURTS.

Back in the City of Light, Clarke listens to the two sides of the AI, Angel Becca and Demon A.L.I.E., as they tell her about the impending destruction of Earth, how soon nuclear reactors the world over will begin to melt down, making the planet uninhabitable for human life. A.L.I.E. claims she is merely trying to save humanity but because she is an AI, she cannot find middle ground like Clarke wants and give the people a choice to stay in the City of Light or take their chances on Earth. Much like in the other season finales, Clarke is faced with a dark choice, force her people concede and possibly be safer or made the hard decision to kill some now with the hope that the rest can be saved later. In the end, she chooses the latter decision, as she has always done, risking the relative safety of the now in favor of the hope for the future.

When A.L.I.E.’s kill switch is engaged, those in ALIEKRU come back to life, so to speak, with all the pain and memories of their actions assaulting their senses at once. This scene was even more heartbreaking to watch than Lexa’s sendoff because Lexa was always doing what she thought was right. Those like Kane, Emori, and even Jaha to an extent, were prisoners in their own minds, unable to stop what they were doing to those they love.

In the midst of all this bittersweetness, Octavia comes in with her sword and stabs Pike through the heart. Part of me wishes she had stabbed Jaha instead, but I can recognize that Pike’s journey was at an end. He may have thought he was doing the right thing, but it wasn’t, and he couldn’t own up to those mistakes the way Kane or even Bellamy have.

And in the end it’s Clarke and Bellamy on the throne together, side by side, once again making the tough decisions to save those around them. I LOVE that these two are equals. I’ve said it before that without the two of them together, things always head south, and now with Clarke admitting she ran from her problems, the pair can finally start to lead the way they were meant to. (But again, I’m definitely not advocating a romance. Please, please let them stay friends.) Also, add Raven into that mix of leadership because without her, they’d all be dead.

After muttering to no one in particular that he was finally happy, it seemed all but certain that Jasper was going to kill himself in the final moments. He didn’t, and I wonder if that was a bit that changed due to them filming two endings, but with him alive, I hope next season he doesn’t continue his “Clarke kills all my happiness” mopey montage.

Murphy acting as Clarke’s Flamekeeper makes me happy. He’s a character I was CERTAIN I’d never like and look how things have changed.

What happened to Indra!? I hope Octavia immediately went to take her down off a cross because she deserves better, especially after saving Kane last week.

Next season needs to have more Luna. I hope they make use of her boats and her excellent leaderships skills. They need more of her if they’re to save the planet.

I can’t imagine that Earthkru (heh) will try to get back into space. Instead, they’ll have to find a save place on Earth and protect it. I assume it’ll be similar to season 1’s arc.

Also, Arrow had a TON of references to The 100 this week, what with the mention of Mount Weather, an ark, etc. I know these are generic in terms of the apocalyptic nature of Arrow right now, but I like to think it was a subtle nod to the best show on the CW.

The 100 returns next fall for season 4. May we meet again.

Previous article
‘Arrow’ and the Character Assassination of Felicity Smoak
Next article
‘Outlander’ – “Faith”: The Beauty in the Darkness