‘Outlander’ – “Faith”: The Beauty in the Darkness

There are some bad things going down on Outlander right now so WARNING: spoilers through Outlander 207: “Faith”.

Last week Outlander ended on a pretty bleak note with Jamie breaking his promise to not duel Randall and Claire collapsing from a likely miscarriage. Things have been rough for the Frasers in France, maybe even more difficult than they were in Scotland. They’ve grown into different people, each shaped by the darkness they’ve come to inhabit over the past year. But at the end of the day, no matter what this couple has gone through, you know that somehow they’ll manage to find the light again and return to one another. Theirs is the epitome of a star-crossed romance and it’s why we root so much for then succeed, even if we know they’re doomed to fail.

“Faith” is the beginning of Act II for Outlander’s second season, mirroring the motions we saw in episode one. It starts off with a jump forward in time, to a vision of Claire and her child looking at a book about birds when the young girl asks if her mother has ever seen a heron. Claire reminisces about seeing one in Scotland and then we’re quickly thrown back into the “better” time period in Paris. Claire is in a hospital bed at L’Hopital Des Anges, bleeding out, but being aided by Mother Hildegard and the executioner/doctor, Monsieur Forez. Claire fades in and out, awoken by a fever, and Mother Hildegard tells her that sadly, Claire has lost the baby, and she too, could die if the fever does not pass. It is here that we have the best line of the night, if not of the season.

Father Laurentin: “Would you like to make a last confession, so that you may unburden yourself of any sins?”

Claire: “My sins are all I have left.”

It’s a line that sat with me the entire episode as I watched Claire through this journey of loss, mourning the death of her child, the hatred toward Jamie. Balfe is absolutely outstanding in “Faith” saying so much with so little dialogue. And we as viewers know this is not the last time that she will cry out in agony over the loss of her husband, as the future has told us she will do it yet again in the coming months.

As Claire is in a fevered state, Master Raymond comes to her side, donned in a hood and cloak so as to hide his identity from the King who searches for practitioners of magic. Raymond knows that the placenta is still inside Claire after the miscarriage and he rids her body of it, saving her life in the process. He then tells her that he didn’t call her Madonna because she was with child, but because she has a blue aura about her, just like the Virgin Mary. Just like him. 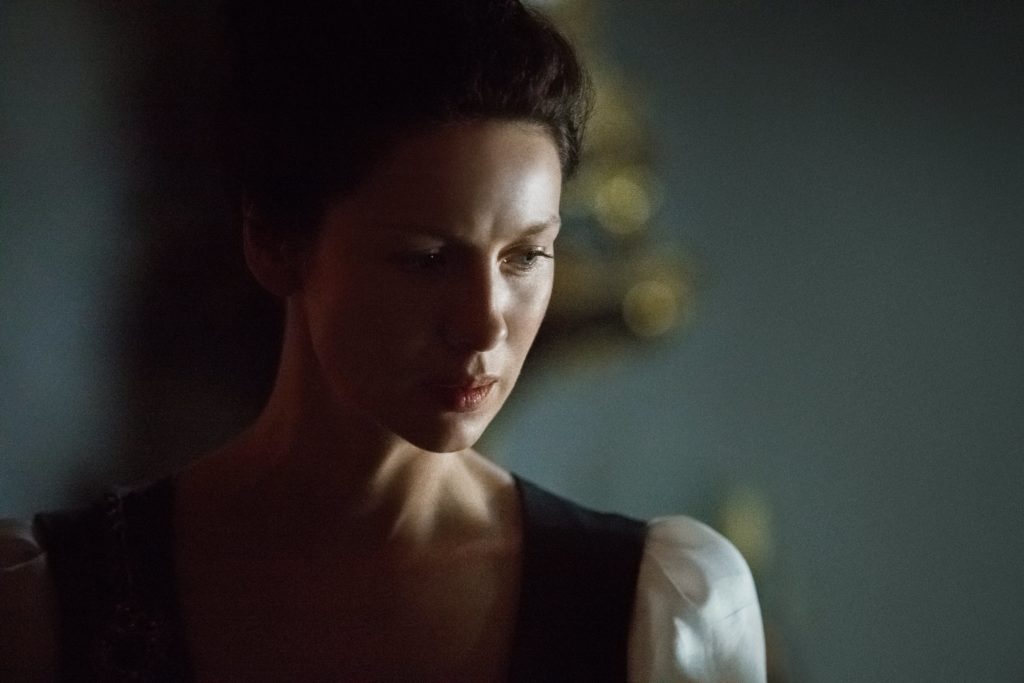 Claire, now physically healed from her ordeal, returns home, but Jamie has been imprisoned in the Bastille for dueling Randall, with an indefinite prison sentence. Claire’s return was the second time I cried during the episode (though not the last). I want to talk about this scene because this moment is the perfect example of what Outlander does so well when compared to other shows. Outlander allows the scene and the actors within it time to breathe, to take in the scenery, to really show off the internal struggle to the viewer. Claire wants to hate Magnus and Fergus and everyone else who let Jamie leave that day, she wants to blame them for her husband’s rash actions, but deep down, she knows she can’t and that these people love her, and that breaks her down. She’s grateful for their support and yet, they’re another reminder of what she has lost.

The truly horrific moment of the night came when Claire learned why Jamie broke his promise. Fergus, after a nightmare, confesses to Claire that he stole perfume from an English officer, the one we all know and love. And Black Jack, the monster that he is, rapes Fergus for it. The boy cries out and Jamie comes to his rescue, beating the ever-loving pulp out of Randall before he’s pulled off him by brothel bouncers. In a fit of rage, Jamie challenges Randall to another duel, one we already know the ending to.

Realizing that she’s been wrong about Jamie, that he was only defending Fergus, protecting Fergus from the same horrors he went through at Randall’s hands, Claire petitions King Louis XV for Jamie’s release from the Bastille. But King Louis XV, while a generous and intelligent man, isn’t selfless, and in return he asks for Claire’s help with a little matter in the defense against the dark arts portion of Versailles. Louis brings forth the Comte St. Germain and Master Raymond. The King is understanding of magic and knows that it has its uses, but he wants La Dame Blanche to ascertain whether or not either man holds a darkness inside him enough to use that magic for evil. Claire does what she does best, puts on a show even while her heart is still crippled. It’s one of the things I love most about her character, she’s so ably pulls her emotions into herself and gets the job done.

Through a deceptive use of bitter cascara, Claire proves Master Raymond’s innocence, but at the last moment, Raymond poisons the chalice, causing us to bid adieu to the most beautiful villain on Outlander. 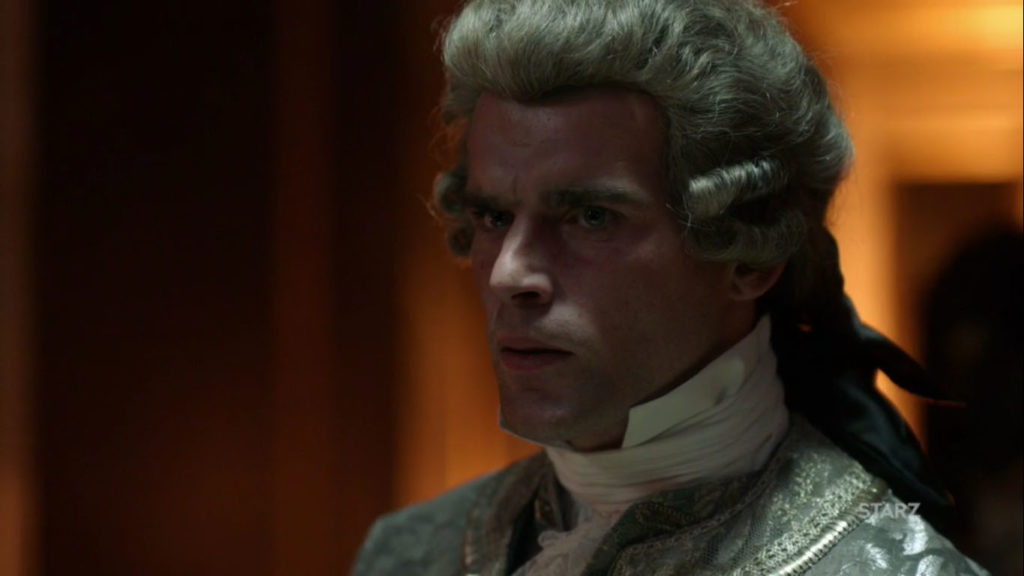 Claire believes the ordeal to be over, but the King has other plans. He gently pushes her down onto the bed, and weeks after having lost her child, he rapes her. There’s nothing much to it, a few thrusts as Claire closes her eyes and remembers why she’s giving in to this awful act, and then it’s over. She adjusts her dress, grabs an orange off the table, and leaves. I want to be outraged, to throw a vase at the wall and stomp my feet, but…I can’t because I’m still just so sad about everything else Claire has suffered through this episode that rape actually comes in at the bottom of her list of grievances. And I still hear her in my head rasping, “My sins are all I have left.”

Jamie is released from the Bastille with a magnificent beard I’ll mourn the loss of for the rest of the season, and Claire can barely look at him. She tells him everything, that Mother Hildegard named the baby Faith, baptized her and buried her in the cemetery outside the church. She tells him how Mother Hildegard gave in to a wailing mother wishes and let her hold the child in her arms, singing and crying for nearly a day until Louise gently pulled the baby from her arms. She tells how she sobbed in the fetal position and she hated him for what he had to her, to them, and how she was prepared to hate him forever until she learned the truth of it all.

The final ten minutes of the episode are some of the most gut-wrenching, raw, and vulnerable on the show. Last season Jamie’s soul was laid bare for the world to see and in “Faith” Claire puts her heart on the table, completely broken and crying out in pain. She confesses that she doesn’t blame Jamie but herself because she knew the risks, she put Frank before their family and she went to the duel that day to stop him, and because of these things, her baby girl with beautiful copper hair died.

Jamie forgives her and echoes what he said midway through last year that he’d forgiven her for anything she had done or would do, even sleeping with the King of France. Jamie knows that everything they do, the good and the bad, is for the other, and that if they’re to survive, they have to bear the pain and the darkness of it all together. In the end, they journey to Faith’s gravestone together and say goodbye to the little girl they never got to know, and make their way back home, finally, to Scotland. 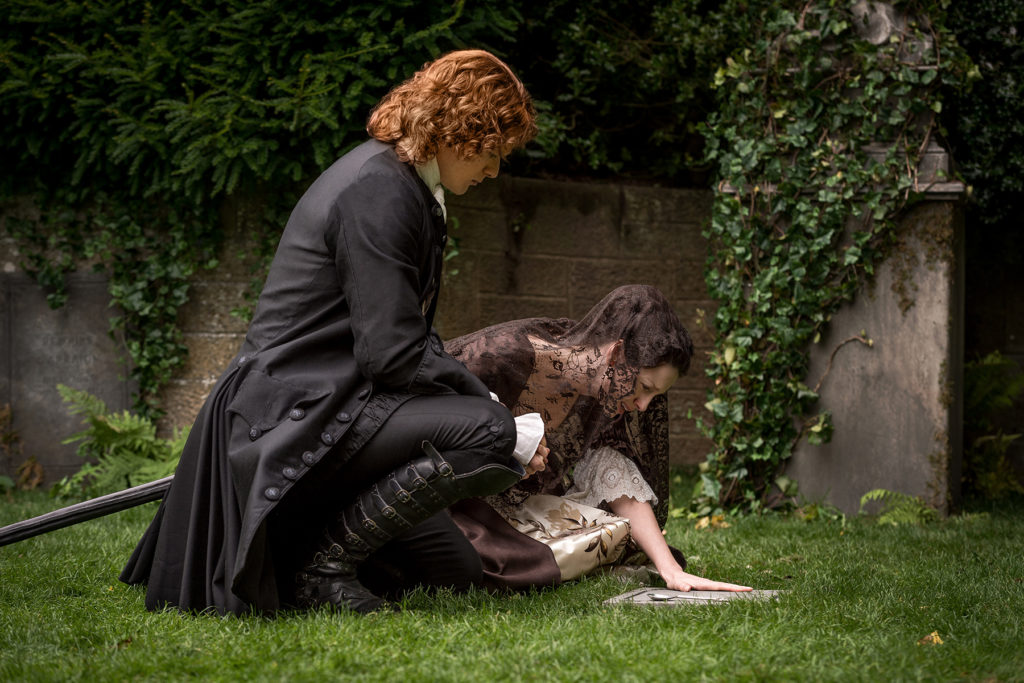 I have a lot of feelings on the subject of both Claire and Fergus being raped. The biggest issue I have is Black Jack’s immediate instinct to rape anyone he meets alone in a room. I know he’s a monster and I know what he’s capable of, but he’s also a still-broken man in unfamiliar territory. He doesn’t have the backing of the English crown in Maison d’Elise and he’s already been smacked down by King Louis once before, so his ego wouldn’t be flying as high as it was in England. I would imagine he’d be more cautious about his actions, but it seems much like Ramsay Snow, there are few consequences for Randall’s actions.

Catriona Balfe knocked it out of the park this episode. She’s always top-notch but in “Faith” she’s the best we’ve ever seen her and I swear by all that is nerdy if she doesn’t receive acclaim for her acting this episode, there’s no justice in this world. 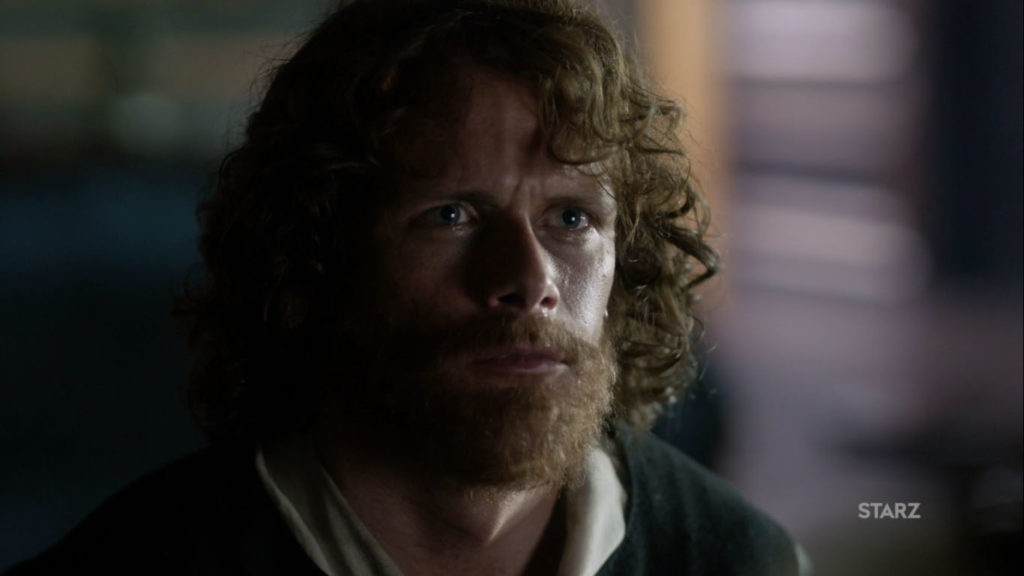 Previous article
‘The 100’ – “Perverse Instantiation: Part Two”: Save This Broken Heart
Next article
‘Game of Thrones’: Will Bran Bring Destruction to Westeros?