‘The 100’ – “Perverse Instantiation: Part One”: Clarke’s Always In Trouble

It’s been a hell of a ride for The 100 fans this year. Between Bellamy’s descent, the rise of Pike, the rise of the CoLaid, and all those deaths, we’ve finally reached the final two episodes of season 3 and the chips have hit the fan. Let’s recap where things are so far: Clarke tried to get Luna to take the AI 2.0 chip and failed; A.L.I.E. has turned Kane and Abby, ruining all my future fanfiction; Raven is a broken genius; and Murphy is skyrocketing to the top of everyone’s list of favorites with his snark and penchant for diplomacy.

Since the Adventure Squad failed to recruit the amazing and OP Luna, they were forced to fall back to Plan G, which was to have a quiet moment alone with A.L.I.E. 2.0 in the woods. Clarke opted to go first because like hell is someone else handling her girlfriend’s remains (she’s kind of like Jasper in that regard). And then! A wild Roan appears, acting all tough and kingly and handsome, trying to steal Lexaboo but Bellamy puts a stop to that nonsense the only way he knows how, with violence and a good smolder.

Adventure Squad regroups back at Arkadia with Roan in his pokeball and I’m a little wary of them just openly talking about ALL of their plans, especially since A.L.I.E. was able to find them in the middle of the ocean, but hey, hindsight, amirite? Also, Roan admitted that he wasn’t the only one tailing them which tells me that Adventure Squad knows absolutely jack about staying hidden. Most of the Squad heads to Polis where they dangle the bait of Roan’s beautiful face in front of Ontari, hoping that even with an AI guiding her she won’t be able to resist his rugged charm. Meanwhile, Raven, Monty, Jasper, and Harper stay behind to figure out how to build a computer to squash A.L.I.E. and her virus. 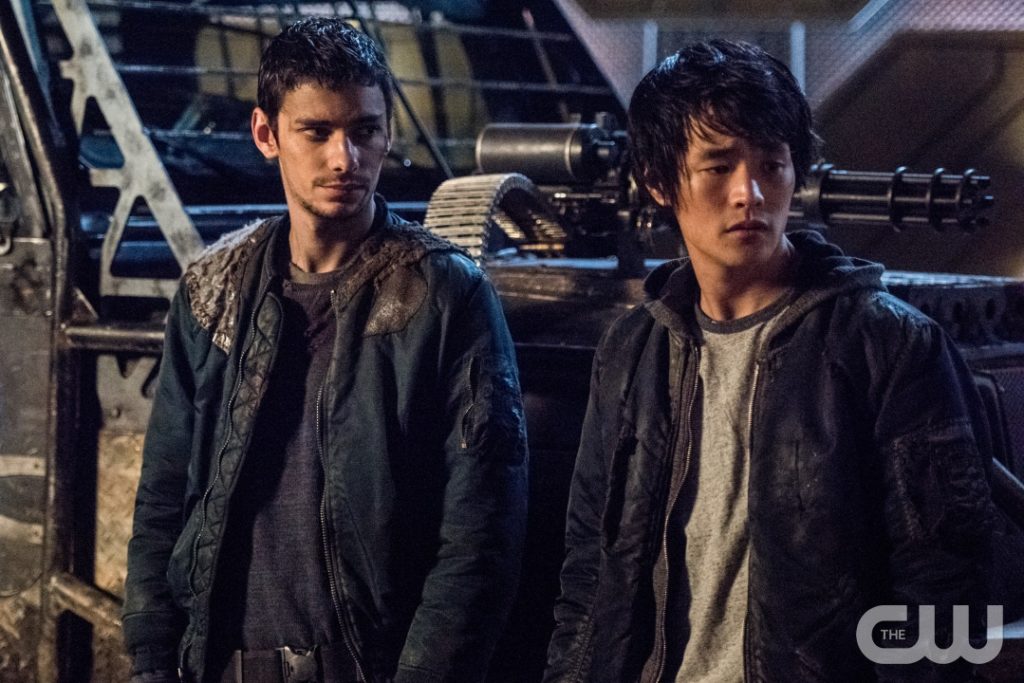 And it’s here where I’m simultaneously shocked and angry to learn that Jasper has taken the chip. First off, where did he get the chip? Second, NO ONE saw him take it? I mean, none of these characters have any concept of personal space but what? They just let him go off alone all depressed? Third, my goodness Jasper being controlled by A.L.I.E. is super attractive to me. Is it the confidence? Is it the smiling? I don’t know but cut that out immediately. I love only one man on The 100 and that is Kane’s beard.

Because Jasper is chipped and all, “What’s a motherboard TEEHEE” A.L.I.E., of course, knows the rest of Adventure Squad is coming for her. When Roan shows up at Polis’ gates and tries to get Ontari to play peek-a-boo, Clarke should have read the room and put the kibosh on the whole thing. It doesn’t help she made eye contact with Bellamy’s hiding place the entire time, totally not giving away their spot, or the fact that her backup was all in the SAME 3 FOOT OF SPACE, I MEAN SPREAD OUT GOODNESS. In a surprising turn of events where Bellamy didn’t shot Jaha in his stupid face, ALIEKRU found the delinquents and captured everyone, supposedly killing Roan in the process, thereby killing all hopes for a Broan romance.

Clarke is tortured by her mom because apparently none of the adults have any sort of mental strength to at least HINDER A.L.I.E.’s mind control abilities. After yet another failed torture sequence, you’d think that ALIEKRU would have learned by now that to get results you threaten the ones Skaikru loves, not the one you’re torturing. Sheesh. I thought AI’s were supposed to be intelligent. Abby is all, “See? I told you. Go get Bellamy and she’ll cooperate.” 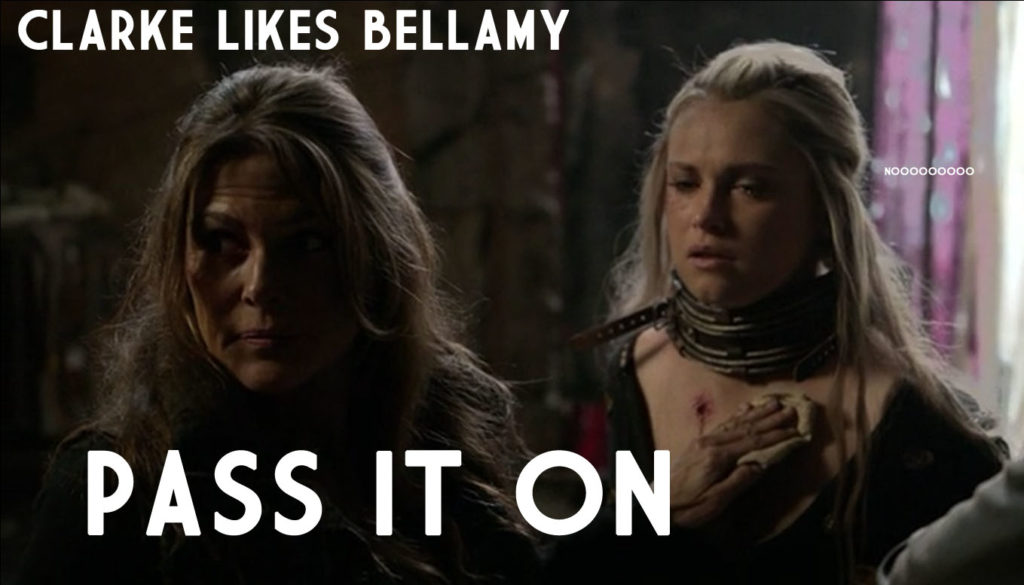 Murphy comes to the rescue with grade-A snark (“Clarke’s always in trouble”) while Indra convinces Octavia not to kill Pike because he’s still recovering from her little cutting session and they want the pain to last for killing MY BOO LINCOLN.

I have to say, I enjoyed all the callbacks to earlier in the season during the episode: Bellamy watching Clarke as Roan’s prisoner through the gun’s scope, the assault on the elevator, Bellamy rescuing Clarke in the throne room. It’s nice to compare where these characters were at the beginning of the season to where they are now, how their response to adversity has changed. In the third episode of season 3, “Ye Who Enter Here” Bellamy goes along with Pike’s plan to kill the elevator guards. Twelve episodes later and Bellamy’s instinct is that the guards and everyone else can be saved whereas Pike still feels the need to kill on sight. Even with Clarke in danger, Bellamy isn’t as rash and reckless as he was in the beginning of the season.

Meanwhile, we need to hold a ceremony for person of the year: Monty Green. Not only has this poor delinquent killed his mother TWICE for the good of his people, he also left his new flame outside with Jasper, his BEST FRIEND, who is now controlled by ALIEKRU. That’s some inhuman levels of strength and I’m not sure if anyone else outside of Clarke and Raven have that kind of fortitude.

It’s interesting to note that the characters who will save Skaikru this season are the ones who are able to take those emotional attachments and push them to the side for the greater good. Clarke has been the subject of some controversy this season with whether or not she’s a good leader but when ALIEKRU hung her mother in front of her, Clarke didn’t break.

After a rousing game of Shoot the Jaha, Bellamy, Clarke, and Murphy find a brain dead Ontari and have to settle for Plan H, which is to cry under a desk with a bottle of wine.