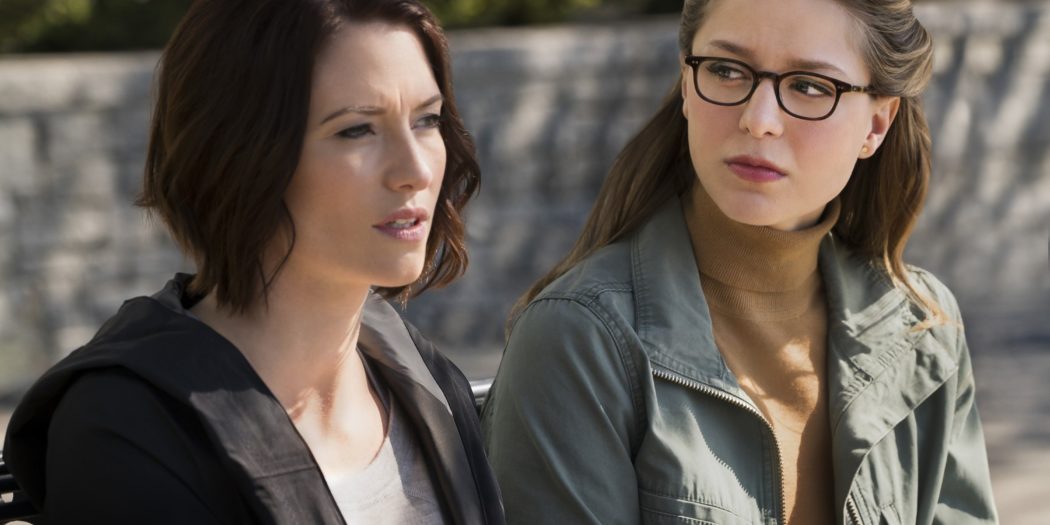 ‘Supergirl’: Rainbow Hearts For Everyone in “Changing”

This week on Supergirl: Alex tells Kara her secret and the whole internet explodes into rainbow heart eyes, James puts on a new suit, and global warming has a new face.

Over the past few weeks, it’s been difficult for me to rein in my emotions surrounding Supergirl. More specifically, where Alex Danvers is concerned. Alex’s journey has been a deeply personal one, the likes of which I’ve never seen before on television, and I’m so grateful Supergirl’s writers haven’t pulled any punches.

As always, I will do my best not to spend my entire review focused on Alex, which is actually easy(ish) this week since “Changing” saw the return of several facets Supergirl has been lacking in its sophomore season. Notably, the return of J’onn to the field, Winn and James’ partnership, and most importantly, the family dynamic between Kara and Alex Danvers.


Just a Boy and His Parasite

This week’s villain was yet another alien, a parasite hellbent on saving the world from global warming. While the plot wasn’t directly orchestrated by Cadmus, which seems odd given their hot and cold status of late, I suspect we’ll find out soon that Mama Cadmus-Luthor was responsible for unleashing the parasite on National City. Or rather, I hope so, because I need them to be more than just okay hackers with alien software.

The parasite villain was an interesting one, not so much in his reasoning or design (though the CGI looked awesome), but in his parallel to Kara and her ongoing journey with learning to be a hero. Both Kara and the parasite are aliens with the same intention: to save the planet. Granted, one had more of a “scorched Earth” approach, but the fact remains, their goals were mostly the same, only the means were different. It’s a reminder that we see echoed in Kara’s brooding relationship with Mon-El: there is a fine line between good and evil. Intentions don’t matter, but how you get the job done, does.

Dr. Rudy Jones, our intrepid climate change scientist, is infected with a parasite after mucking around with a 5,000 year old wolf corpse. Seems pretty disrespectful to be digging your hands into ancient roadkill, but what do I know? Rudy is so dedicated to saving the planet that he shuns all treatment at the DEO after the “attack” that killed all of his colleagues and opts instead to let the parasite play ring around the ear canal. Turns out, the parasite gives Rudy the ability to drain energy from living creatures. This doesn’t work out well for Supergirl or J’onn, who just returned to the field because Martian CGI is expensive.

And so begins the usual superhero course of action:

Rinse. Repeat on every superhero show on The CW.

After announcing that she was using Plutonium 239 (lol why Kara) on him, reinforcing the whole “too much of anything is bad” concept, Kara kills Rudy Jones. And we’re just left to…celebrate? Wait for Arrow and his underlings to lecture her? Such an act seems unbelievably out of character for her, especially with her harsh sense of right or wrong, but… yay? We got the bad guy? High-five, everyone, for a job well done?

On Becoming a Hero

“Changing” saw both James and Mon-El deal in their own respective ways with becoming a hero. James, as I mentioned last week, wants nothing more than to be a hero. He tells Winn that ever since he first saw Superman, he’s dreamed of saving the day. It’s an admirable trait, if one that kind of comes out of left field. After Kara nearly dies twice because the plot demands it, James dons his new “Guardian” suit, and I have to say that Winn did a much better job on the suit than whoever worked on the mask for Diggle on the last of Arrow.

Mon-El, however, has no interest in being a hero like Kara. He wants to just live his life, and for once, I find myself agreeing with him. (Take pictures, this may never happen again.) Sometimes, I think Kara forgets that Mon-El only just learned the fate of his planet. Weeks ago his entire life was blown to shreds and he’s supposed to just… be okay? Kara had years to deal with that loss, a loss she still battles, so it seems insensitive she would push Mon-El to forget that emotion so quickly to save a new planet. Her end goal is admirable, but what works for her doesn’t work all.

That being said, I could watch Kara kick Mike’s ass all day and be perfectly content, sipping my smug hypocrite tea.

James and Winn have a few key heart-to-heart moments in “Changing.” I’ve said this before and I’ll say this again: Winn benefited the most from the switch to the CW. Watching him stand up to James was a highlight for me, and not just because I wanted them to SMOOCH after having a shouting match in the big echo chamber. Heck, I didn’t even know I wanted to ship James and Winn until that final scene where they ogled the hell out of one another and joked about being Super Friends.

But here’s the difference, truly, between James and Mon-El: their journeys are similar. Both are men who have been influenced to act by Kara Danvers. Whether it’s all romantic or not has yet to be seen. Mon-El wants to maintain his identity, to be himself when he’s a hero, which is why he fights so hard against Kara’s training. James, however, is perfectly content with stripping down his entire identity to be a hero. I suppose that’s the difference between being gifted powers and earning them the hard way.

Either way, Mon-El’s openness against James’ secrecy is going to come back in a big way, I’m sure of it. For a dude who was so against secrets last season, James seems awfully calm about not telling Kara the truth. And that scares me.

If you thought last week was hard to discuss, strap in boys and girls, because we are about to get covered in rainbow hearts. As of the writing of this post, I’ve watched “Changing” three times. Three times and I don’t know how to compose myself enough to “review” each of her scenes. For starters, Maggie is absolutely adorable in her support of Alex and coming out.

Alex: “Maybe it’s just a phase. Maybe it isn’t real.”
Maggie: “It’s real. You’re real. And you deserve to have a real, full, happy life. Okay? Tell your family. This is the biggest thing that has ever happened to you and you shouldn’t have to do it alone.”
Alex: “I have you.”
Maggie: “Yea, you do.”

It’s great that Alex has Maggie as a support system, but it’s even more important that Maggie never lets Alex fall into doubt about herself. I’m sure that Maggie will come under fire after the end of the episode when she spurned Alex’s advances, but personally, as heartbroken as I am for Alex (and believe me, I am), I think this move was important. I’ve said this before, but Alex and Maggie were never about “Sanvers.” They were about Alex coming to terms with who SHE is. Maggie isn’t turning down Alex because she doesn’t have feelings for her. Quite the opposite, in my opinion. I think Maggie loves Alex, but she remembers the whirlwind of emotions when first coming out, she remembers the struggle to understand all these changes. If Maggie and Alex became a couple and the relationship became strained, Alex wouldn’t have Maggie as her support system. She wouldn’t have that one friend who knows exactly what she’s going through, so it’s more important for Maggie to be Alex’s friend right now, instead of her girlfriend.

As important as Maggie is for Alex, Kara is even more important. The heart of Supergirl has always been, and should always be, the love between the Danvers sisters. Early on in season two, the show strayed from that but thankfully, came back in a big way in “Changing.” When Alex needed Kara, she was there. She may not understand exactly what Alex is feeling, but Kara, more than anyone else, loves Alex. When Alex first tells Kara, Kara is hurt, not because Alex didn’t tell her first or because she doesn’t understand being gay. Kara knows these parts of Alex’s history but she doesn’t know the depth of them, the hurt of the repressed memories and it kills her that she never gave Alex that chance to be more open. She’s hurt because she feels like she didn’t give Alex that safe space that she needed to be herself. Or to even just find herself.

All I want to do is hug baby Alex and Kara together and never let go. When Kara said, “I am SO okay with it!” I fell to pieces. I could ramble on for days about how THIS relationship between sisters is one of the most beautiful and relateable ones I’ve ever seen on television. I want to put them in a tiny box and hold them close to my heart. And then at the end, when Alex hates herself for putting her heart out in the open, Kara is there to hold her and remind her that she’s still proud of what she’s done.

None of this is as eloquent as I wanted it to be but I love these two. I love them so much. Chyler Leigh and Melissa Benoist, you beautiful puppies. Never change.

I desperately want to talk more about J’onn and M’gann but there’s not too much storyline there. Yet! I absolutely LOVE where the relationship is going and my goodness Sharon Leal is stunning and wonderful. (Also, she’s 44. She looks like she’s 20. What the what.) There’s a storm brewing between our Martian friends and it’s making landfall soon. J’onn is so unbelievably sweet toward M’gann and I find myself rooting for them, even though I know the other white Martian shoe is about to drop.

Now that we know Kara can get drunk, I kind of want to see more of it. No alcoholism necessary but her talking about being floaty was the light-hearted, adorable Kara I needed in my life.

Dear Alex Danvers and other members of the DEO: why do y’all still use guns? They never work. Sincerely, me.

There’s a part of me that wants one of the aliens to address the fluidity of sexuality. For instance, have Mon-El or J’onn make a comment about not loving genders but loving a person on their planet. YOU CAN DO IT, SUPERGIRL.

Also, I totally think Mon-El was a male escort on Daxam. And I’m okay with that.

Supergirl breaks my heart every Monday on the CW at 8pm EST.

Don't let the fancy nerd duds deceive you; Jen’s never been described as “classy.” You can find her on Twitter where she stalks all of her favorite celebrities: @jenstayrook. Or you can find her on Steam or Xbox dying in every game she plays as "Rilna." Email: jen.stayrook@theworkprint.com
@jenstayrook
Previous ‘How To Get Away With Murder’ Review – “No More Blood”
Next ‘South Park’ Review – “Members Only”