After weeks of very weak South Park episodes, we are finally seeing the fruits of the writers coming to bear. “Members Only” starts to slowly unravel the plot that Season 20 has built up for so long. Compared to last week where they only had twenty-four hours to incorporate new news, this episode seemed more complete with much more savage and witty jokes.

We start off with Garrison finally transforming to his final form under the supervision of Caitlyn Jenner. With the power of his new toupee and extra UV rays, he is now embracing his role as the President of the United States. The first item on Garrison’s agenda is to enact revenge on all those that opposed him. PC Principal is the first of such victims. Garrison explains to PC Principal about how PC Principal should be thanked. PC Principle was the one that created him. South Park really wants to make this point come across. Did PC culture help enable someone like Garrison gain power? One will never know. Regardless there is one thing Garrison has learned. That is that his penis has gotten really dry and saliva is its only cure. He continues to tell the rest of South Park about his problem of a dry penis with speaking with Eduardo Hernandez. Eduardo did not let Garrison double bag his groceries and was wondering if Eduardo would now want to double bag something else. 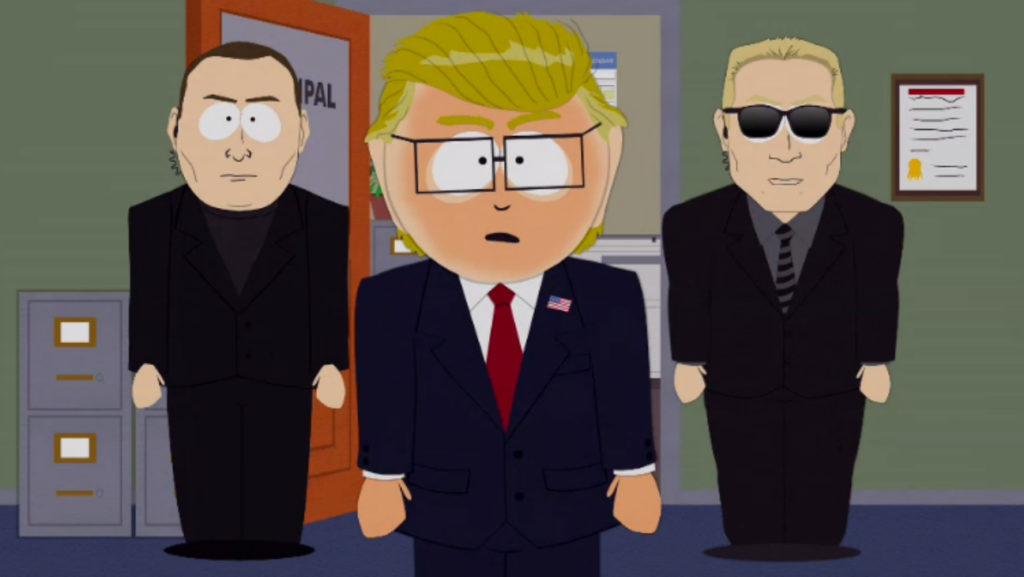 Garrison gets rudely interrupted and sent to the Pentagon. There he is given all military secrets and classified information. The generals ask Garrison for guidance about what to do in the current crisis. The Danish are still going forward with releasing Trolltrace. The Danish want the whole world to burn thus allowing a new world with only happiness and laughter can exist. The whole world is definitely on edge from what the Danish are doing. Every country is preparing to attack everyone else and finally we realize what has been going on. Boris Johnson calls Garrison and tells him not to eat the memberries. The memberries clog your judgement and now all of Britain is burning. It is too late for the U.S. though. Garrison hangs up on Boris, with Boris stating “I believe they have eaten the memberries….. Oh dear”.

As Garrison is assuming power, many people want to leave to Mars (Cher included). Cartman must take a ticket and wait. Butters meets Cartman at SpaceX after he is converted by Bill’s Gentlemen Club. After waiting for what seemed to be forever, Cartman, Heidi, and Butters get a tour of SpaceX. Cartman is furious that they cannot go to Mars now. Musk states they are 10 years too early before that can happen but maybe with a very smart and funny girl like Heidi, they can get there sooner.

Memba the other plotline that is still going on? I memba!! The memba berries have taken over the White House in a stampede. They are led by the Don of memba berries. Part of their mission involved calling Vladmir Putin and asking him if he remembers the Cold War (savage). During a party where all the memba berries are partying to the song Africa, the Don arrives. He exerts his authority and is ready to let the people memba the “real” storm troopers will be coming. Will this WWIII come to fruition?

Lastly, we see resolution of Kyle finally realizing that Gerald is Skankhunt42. It only took the framing of Ike as Skankhunt42 by Gerald for him to find out. With only two episodes left in the season, we are finally witnessing the endgame. While we witness it though, I do not think anyone is able to predict where the South Park gang will end up.

Previous article
‘Supergirl’: Rainbow Hearts For Everyone in “Changing”
Next article
‘Empire’ Review: “Chimes at Midnight”