This week on Supergirl: I try really hard to not just talk about Alex Danvers and her emotional revelations. (And fail.)

It’s been about five hours since I finished watching Supergirl’s fifth episode, “Crossfire,” and I still don’t know how to reasonably compose my emotions on what happened in the episode. “Crossfire” was a solid episode for all of the characters, but you all know the one I want to discuss by now: Alex Danvers.

And I can’t. Not yet. First, because I’m a tease and I have to make you all read this whole damn review and second, because I’m not entirely sure what to say yet. I’m still grappling with the revelations myself, so let’s get into the other nitty gritty bits.

I liked Mon-El for his first two episodes. There was a sweetness behind his snark and perversion that had real potential. Supergirl needs a variety of men on its show because I’m all about equality, so I tried to welcome Mon-El with open arms even though he started ringing douchebag alarms. Besides, he makes Kara smile and Kara deserves to smile more.

And then they named him “Mike” and now I can’t get the image of him sitting on a disheveled porch talking about how deep the song “Wonderwall” is out of my head. I detest even calling him Mike. It’s Mon-El or nothing. I don’t care how many times I have to use a stupid hyphen because I refuse to give validation to this horrible, no good, very bad name choice. 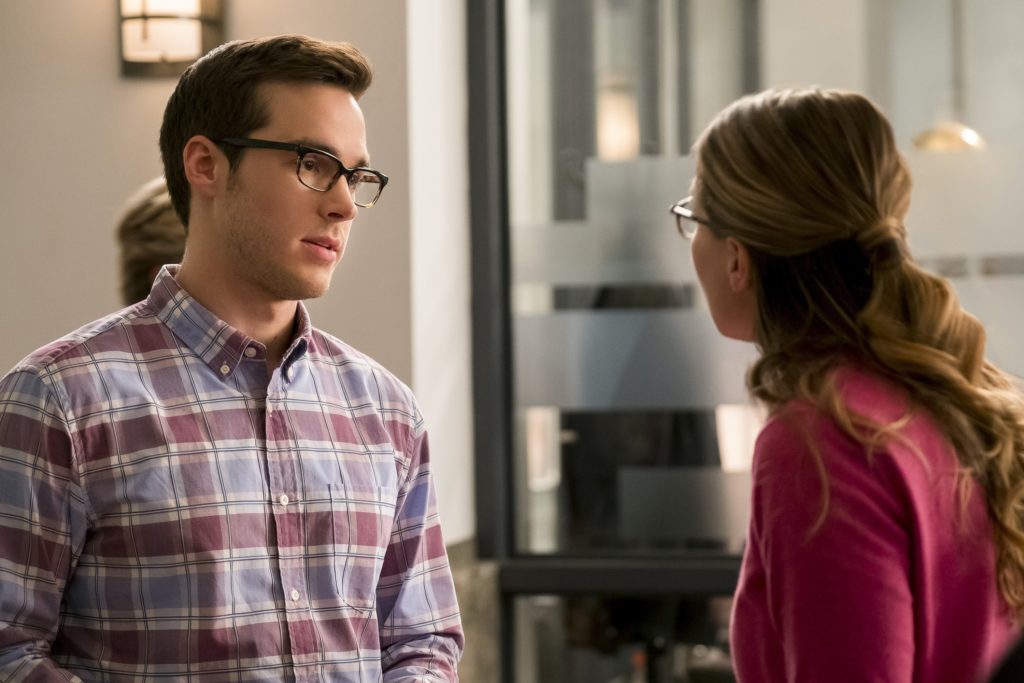 Mon-El goes in for his first day at CatCo because nowhere else in National City has jobs available and Kara basically runs that joint so she just does what she wants and James is all, “Sigh. I guess that’s okay (btw, I still love you).” We should probably discuss how Mon-El is a bit of a sleaze but really my big takeaway from his arc was how unbelievably preppy everyone dresses on Supergirl. A bow tie? Skin-tight everything? Is National City located just outside of Portland? I digress.

After being a third wheel in Kara’s date with Lena Luthor and then also almost having sex at work, Mon-El is fired from his internship at CatCo because clearly he was just too pretty.

I have some feelings about Mon-El straight up manipulating Ms. Tessmacher into doing his work and trying to sleep with her, but I realize I’d be a big, fat hypocrite if I did so when I cheer from the sidelines while Sara Lance alters history with her sexuality. (It’s not the same, I know, but look at me trying to grow or some shit.)

Cadmus is trying really hard to be a big, scary villain this season and while Mama Cadmus is definitely rocking it, her minions are less than threatening. The dystopian-esque “we will save you by controlling you” videos are a little too over-the-top for my tastes. The scary thing about Cadmus, for me, has always been the fact that you never quite knew who they were,  you never quite understood their relationship with Luthor or their end game.

In Supergirl, however, Cadmus comes across as a conniving villain who enjoys monologuing and twirling his mustache too much. By giving D+ students alien weapons and letting them go crazy, they’re weakening their potential. Cadmus should be more like the Kryptonians from last year: 50 shades of baddie grey. 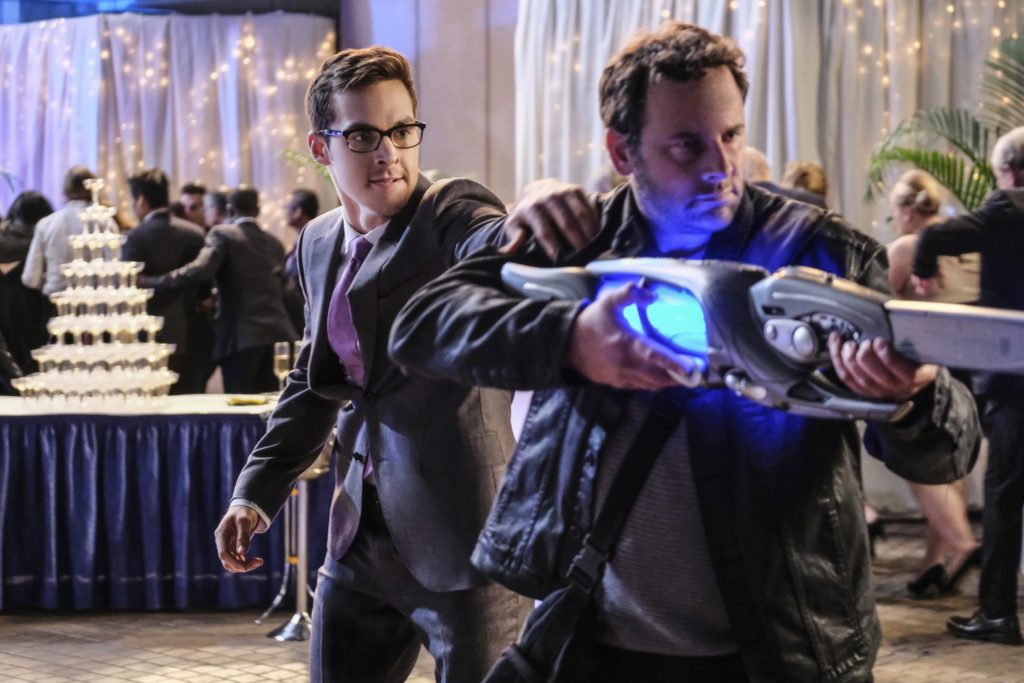 Kara dispatches the D+ students every time they show up somewhere with new hi-tech alien weaponry, but the highlight of their interaction is when they crash Lena’s shindig and she’s waiting for them. I find Lena Luthor incredibly fascinating. No, Lena will never, ever replace Cat Grant (and I miss her), but there’s something to be said for Lena as a character. Not only is she the CEO of her family’s company, but she’s clearly intelligent and probably spends as much time in R&D as Bruce Wayne.

However, there’s more to Lena than we might know because as the final moments rolled, the audience realized that Mama Cadmus is also Mama Luthor. Do I think this means that Lena is secretly evil? Heck no. I suspect she’ll be just as surprised. Do I think Mama Cadmus should be more careful showing her face around minions? You betcha.

James and the Giant Existential Crisis

Last season I rooted hard for the James and Kara ship to set sail. Right around the moment James asked to tell Lucy Kara’s secret was when my affections for the pair started to waver. It was an unfair situation for James to put Kara in and even though she ultimately told Lucy the truth, it never sat right with me that he coerced her into that decision. (Also, I miss Lucy.)

I don’t care for the James and Kara ship this season because not only would it be incredibly inappropriate with him being acting CEO of CatCo, but also, there are times when I can’t handle his angst. 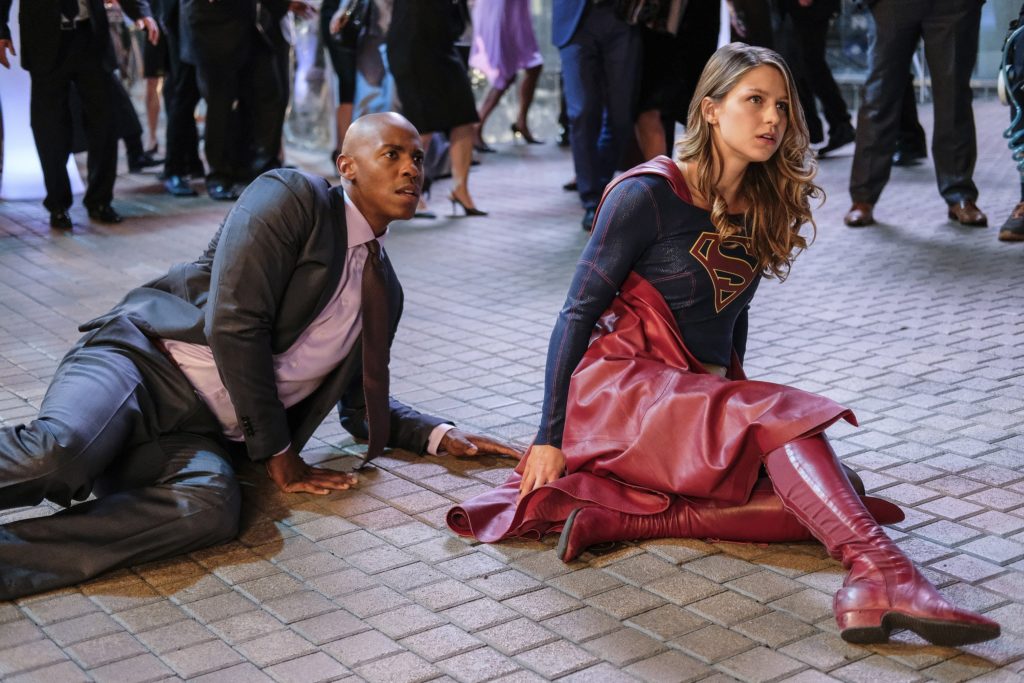 I get it. James feels inadequate next to the Supers. He’s close to both and knows he relies on them every time his life is in danger. He lost Kara romantically but still had hope that maybe one day she’d see him in that same heroic light she first saw him in at the beginning of last year. But then Mon-El showed up and while he’s not Kryptonian, he still has similar powers. When push comes to shove, Mon-El doesn’t need Kara to save him. More importantly, with everything at the DEO (including Winn), Kara doesn’t need James anymore, and that fact drives him to becoming a self-made street-level hero who has no idea how in over his head he is.

James tries to take on the Cadmus minions but he fails and is forced to run off to fight another day. He enlists Winn’s help and I’m happy to see those two getting along for once. Winn understands James’ plight and agrees to make a suit for him, thereby giving us Guardian’s origin story on Supergirl.

Honestly? As I’ve said, sometimes James grates on my nerves, but I’m legitimately excited about this turn of events for him. I’ve always thought he and Kara were an “end game” romance and his transformation is just one step in that direction.

Last season, I low-key shipped Alex/J’onn because one, I’m a romantic trash bag and two, after the events with nearly every lesbian couple on TV, I knew my Alex/Lucy pairing would never come to fruition, so in my fanfiction the ship stayed.

And then they told us in the off-season that a main character on Supergirl would come out. And then photos of Maggie and Alex leaked. And then we realized Maggie was that Maggie from the comics. And then I had so much hope in my heart I couldn’t control what was happening.

Alex has always, easily, been my favorite character on Supergirl and now? I can’t breathe thinking about her scenes tonight with Maggie. The palpable vulnerability, the visible fear, the crash of emotions as she realized what we so plainly recognized the last few episodes: Alex Danvers is gay.

Everything surrounding Alex’s epiphany about her sexuality was what I dreamed it always could be. Alex is logical, rational. She’s a hard-worker who has always put everyone else before her own interests. Even when Maggie mentions that her ex chastised her dedication to the job, Alex can’t help but see that as a compliment and not a negative quality, because she lives for the job. Then the potential for romance enters the equation and nothing about it is logical, rational, perfect. Alex tries her best to quell the new and frightening feelings, but she can’t. And in the end, she won’t.

Alex’s scenes only took up around six minutes of screen time but for me, her story was the entirety of the episode, broken up by moments with Kara or James to give me time to breathe. Alex’s awkwardness around Maggie has been adorable, real, and relatable. There’s a familiar comfort in seeing this strong, intimidating woman struggle to formulate words when talking to a pretty girl.

After asking out Maggie about a dozen times over the course of a few days (they played pool together!), Maggie confesses that she didn’t know she was into girls. Of course Alex, still grappling with her new emotions, freaks the hell out and runs off. But Alex is both curious about and comfortable around Maggie so she can’t stay away for long. Alex initially goes to her sister, maybe to confess, or maybe just to apologize. She now realizes how hurtful it can be to try to force someone into your notion of “normal” and she feels guilty for possibly ever putting Kara in that situation. In the end, she doesn’t tell Kara about her realization because Lena comes in and mucks all that up, but I’m okay with that. I’m okay with Maggie being the first person she tells because Alex needed that.

When Alex tells Maggie, there is no judgment, no confusion, just a gentle understanding of the emotions pouring through her. Maggie stays silent because this moment, this revelation isn’t even about Maggie–it’s about Alex coming to terms with Alex. I’m so relieved that Maggie and Alex didn’t kiss at the end because Alex coming out was too important; it’s so much more than just romance.

Everything about Alex’s confession felt real. Her range of emotions travels from fear to understanding to comfort and back to utter panic again once she realizes what just fell out of her mouth. She smiles because she’s nervous and it’s probably the only thing keeping her from crying. God, I have no idea how anyone is writing a normal review about this moment because my heart both aches and celebrates for Alex’s journey. The fact that she’s an adult who has been hiding this her whole life really gets to me, but now, now she feels whole. Chyler Leigh, Floriana Lima, Supergirl writers, thank you. All of you.

Kara announcing herself before the final fight of the episode is exactly the opposite of what you should do when you’re fighting crazies with overpowered weapons.

Why didn’t J’onn just transform into Kara again so as not to blow her cover with Lena Luthor? No matter how much Lena flirts with Kara, you have to question her intentions and her family ties. Kara’s identity should be better protected and it’s almost laughable at this point if Lena really is clueless as to her true self.

Also, J’onn was absent this episode and I’m not okay with that.

As much as I LOVE everything that’s happening right now (Alex), there’s something missing from Supergirl this season: that sense of family. We’ve had so few group scenes this year that it’s bumming me out a bit. I know last year was difficult, but I’d give up a lot (not Alex) to see our characters all cuddled up on Kara’s couch eating pizza and pot stickers. Come on, CW. I know you have it in you. Not every episode has to end on a cliffhanger.