‘Supergirl’: Family is tested in “For the Girl Who Has Everything”

Supergirl: Season 1, Episode 13
“For the Girl Who Has Everything”

After last week’s romance-filled episode, I was worried Supergirl might head down a CW road, inserting love triangles and rectangles and octagons all over the place. Sure, Winn and Jimmy Olsen have been at odds for Kara’s heart for a while now, but with the inclusion of Cat Grant’s son, Adam, romance seemed poised to the front seat. Thankfully, CBS and Supergirl writers backed on out of that driveway and drove off. In fact, this week it took those plots and neatly set them aside. Instead, it focused on what makes the show so great: the familial relationships.

Everyone knows about Superman’s heritage and how he was raised by the Kent family as Clark. While Kara’s story follows a similar path, she has something Clark never did: a sister. Alex and Kara have such a strong relationship that it’s the reason I tune in every week. Where Cat Grant keeps Kara grounded in reality, Alex keeps Kara flying. She believes in her sister like no one else, even when their relationship is tested by a messed up daffodil that mentally sends Kara back to Krypton with her family.

There’s a larger plot going on in the thirteenth episode, “For the Girl Who Has Everything”, what with Non and Astra still going forward with their plan to kill all humans and other Bender B. Rodriguez nonsense. Non’s quest is relatively cliche (and normal) in the comic book world and there isn’t anything too special about him as a character either except now he has a loved one to avenge.

The real story is Supergirl under the influence of the alien parasite Black Mercy, torn between the family she once knew and the family she now has. It’s a dilemma that many face, myself included, choosing between blood and friendship, but that doesn’t make the struggle any easier. What makes a family? Is it blood and genetics? Or is it something that can be chosen, something you can cultivate for yourself with the ones you love? 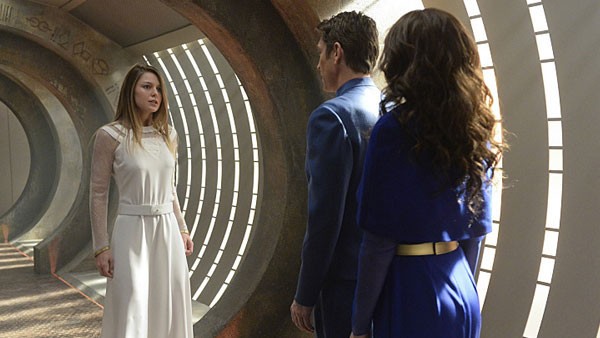 To both Alex and Kara, they are sisters. They may not share any DNA but their relationship and their bond has never come into question. It was Alex who first brought Supergirl into the world and it was Alex again who pulled her from the depths of her imagined Krypton to bring her home. It’s a bond so strong that it inspires Astra to warn Alex about what is happening to her niece while under the effects of the Black Mercy. Even Maxwell Lord, King of poorly written snark and ego doesn’t question the pair’s love for one another. Hank recognizes that their relationship is what keeps the other afloat, keeps the other inspired to continue on their journey. He takes the fall for Alex in an emotionally charged moment to keep that precious relationship in tact.

Sure, Supergirl isn’t the greatest show on television right now. It’s rife with cliche writing, predictable plots, and bland male characters. That being said, the familial relationships on the show are some of best to watch, the best to savor over multiple episodes. Watching Alex plead with Alura’s hologram, desperately searching for any clue as to how to save Kara, broke my heart. Alex is a professional, trained to handle nearly any situation, but when Kara is in danger, that strength wavers and even culminates in her snapping at both Hank and Jimmy when she believes they pulled her from Kara’s dream state early.

But there was also the issue of Kara’s blood family in the episode. As Kara Danvers she may have come to terms with the loss of her life on Krypton, but as Supergirl, Kara Zor-El, she most certainly hasn’t forgotten her heritage. Near the end of the episode, Kara confronts Non about the hell he put her through: not the pain or the near-death experience, but the fact that he made her lose her parents a second time and such agony is unforgivable. Much like Chyler Leigh’s Alex, Melissa Benoist’s Kara is at her best when she is angry, teetering on the edge of breaking. (She does one heck of a Hank Henshaw impression.) The reality of Kara’s loss is palpable, made worse by the death of her aunt Astra, the last real connection she has to Krypton. (I don’t count Kal-El. He only communicates via text anyway.)

Things end mostly on a happy note for Kara’s family. Winn and Jimmy take care of the domestic side of things, even bringing ice cream and potstickers. (I have to admit, I found Alex’s defense of them being at the DEA headquarters endearing.) Alex is relieved to have her sister back, but their relationship now has a secret between them, ready to tear them apart. But even with the threat of Non and Alex’s secret, as the show came to close, I couldn’t help but smile watching the group be silly and comfortable with one another. It’s quiet moment all-too-often cut from final edits in shows and movies, but it’s an important one: one that reminds why these heroes fight and what we, as fans, cheer for.