People today have short attention spans. Everything in our culture has been squeezed into a tweet or smashed down into a YouTube video to keep up with our fast moving world. Who has more than 10 seconds to enjoy anything before moving on to the next big thing? Shütshimi from Choice Provisions, the team behind the Bit.Trip Saga and Whoa! Dave, have taken this idea and run with it.

The gameplay in Shütshimi is simple: You control a cigar smoking goldfish (who for some odd reason has extremely ripped, gun-touting arms), as you fire your way through an underwater swarm of jelly fish, laser sharks, cat controlled submarines, and other odd sea anemones. The only button you will need to worry about, outside of your analog stick for movement, is the “a” button to fire (although rare power-ups do give you a secondary fire with “y” as well). As for control options, since this was reviewed on the Wii U, I was able to use the Game Pad, Pro Controller, Classic Controller pro, Wii remote and nunchuck, as well as the Wii remote turned onto its side.

Shütshimi is part Warioware, part arcade shoot-em-up, and never slows down. It’s all about racking up points, collecting power ups, dodging enemies, and moving on to the next thing, all under 10-seconds. If this sounds incredibly short, that’s because it is. Often times, before you really get an opportunity to fall into the groove of a stage, you are ripped out and moved onto the next area. This includes boss battles. If a boss battle is not completed under the 10-second mark, they will flee and return with their remaining health later in the game. This really puts on the pressure to succeed quickly. 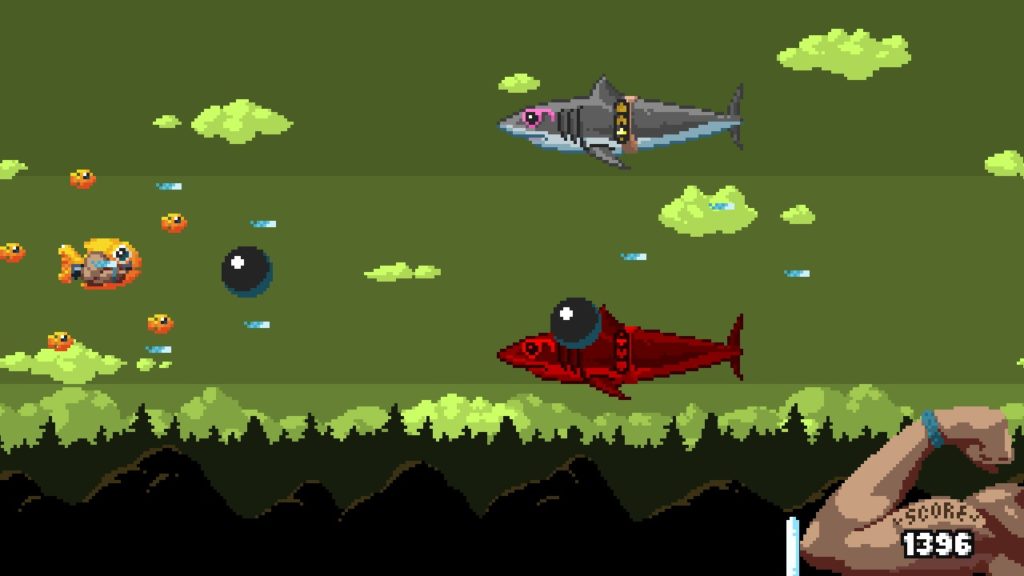 The reasoning behind the main hook of the game is that goldfish only have a memory of 10 seconds. So as our “hero” tells us of his daring escapades, he can only remember in 10-second intervals. In other words, he is creating a highlight reel of his biggest victories. While I’ve got to hand it to Choice Provisions for sticking to their guns with this idea (pun intended), I do feel it may have cut them short, making the game feel shallow.

To spice up the gameplay, however, they have included power-ups between each stage. After you complete an area you are taken into “shop time”, where like the rest of the game you are only given 10-seconds to choose between three different power-up options to take with you into the next battle. The descriptions for each power-up are intentionally vague, but do give you some sort of hint at what it may entail, such as “lousy camera person” to imply that the power-up will flip the next stage upside down. While the power-ups can be fun (like turning the stage into a bouncy castle), advantageous (such as giving you triple the fire power), or just plain weird (like turning all of the stage enemies into flying butts), there is not enough variety to make you want to come back for more. After only a few rounds, I knew what each power-up did, and found myself choosing the same 2-3 options every time. 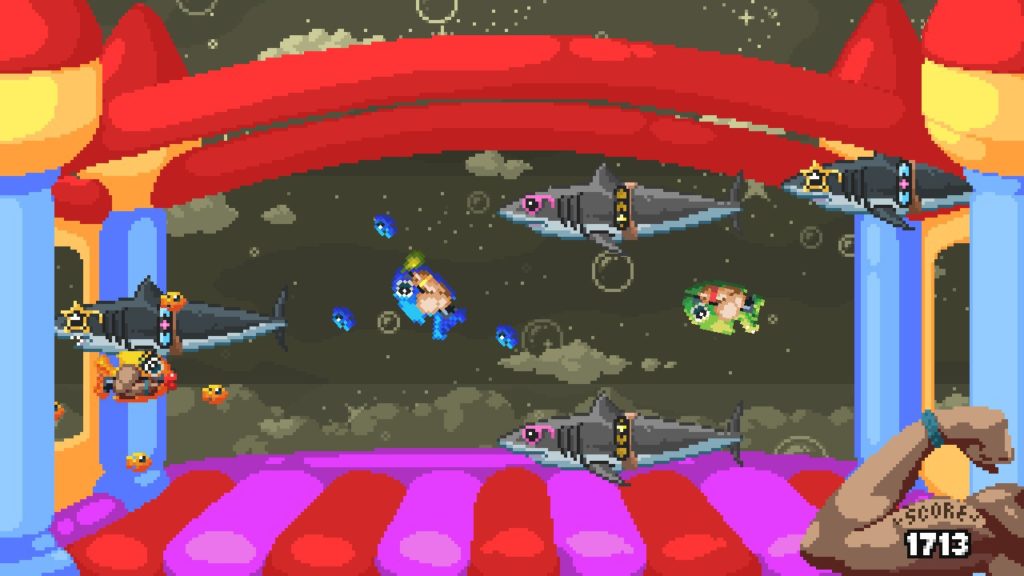 While the gameplay is shallow, they do try and give you some replay-ability. The game includes 32 “awardments”, 46 hats to collect, and is connected to an online leaderboard, so you will always have the ability to try and get the highest score. The game also features 4-player co-op, allowing you and 3 other friends to take on the world. Outside of the main gameplay, it includes a timed boss battle mode and a “heartless” extreme difficulty mode for those wanting a real challenge.

Shütshimi is a fun game in short bursts, but didn’t hold my attention for long. For those interested in collecting everything possible, it will extend the gameplay some. This is a game that I will definitely bring out at parties to play with friends, but I don’t see myself returning to it that frequently. At the normal $10 price point I find it hard to recommend, but if you are able to get it on a discount I suggest picking it up for the novelty alone.

Shütshimi was reviewed with a code supplied by the developers.

@theworkprint
Follow
Previous articleThe Workprint Gamescast Episode 21: The Death of Game Demos
Next article‘Supergirl’: Family is tested in “For the Girl Who Has Everything”