‘Rise of the Tomb Raider’ Review: Eat Your Heart Out, Indy

This is a spoiler-free review of Rise of the Tomb Raider.

“You won’t get far without me.”
Lara laughs. “You don’t know how far I’ve come.”

I thought it would be hard to top the Tomb Raider reboot from 2013. Square Enix and Crystal Dynamics took the iconic figure of Lara Croft, stripped her down to her most basic traits, and then built her back up in their own image in such a dynamic and believable way that’s it’s hard to think Rise of the Tomb Raider could come close to that high mark. And while some of the story notes aren’t as high as the original were, Rise of the Tomb Raider surpasses its predecessor in almost every other way imaginable.

In short: I love this game.

Rise of the Tomb Raider doesn’t begin exactly where Tomb Raider left off. There’s a gap in time where we’re led to believe Lara was off on archaeological trips around the world, generally just being awesome at everything (and making me feel oh-so-unaccomplished at 29-years-old). Yet, still in the back of Lara’s mind is the memory of her father and the dream he failed to achieve, the dream that brought about his demise, leaving Lara with a whole host of daddy issues. Lord Croft was in search of an item known as the Divine Source, a relic said to grant immortality so naturally, such a device couldn’t rest for long. Lara then learns about the existence of a deadly organization known as Trinity who wants the Divine Source for their own means. With the help of fellow Yamatai survivor Jonah, Lara suits up and heads out to stop Trinity from getting their hands on an ancient relic. 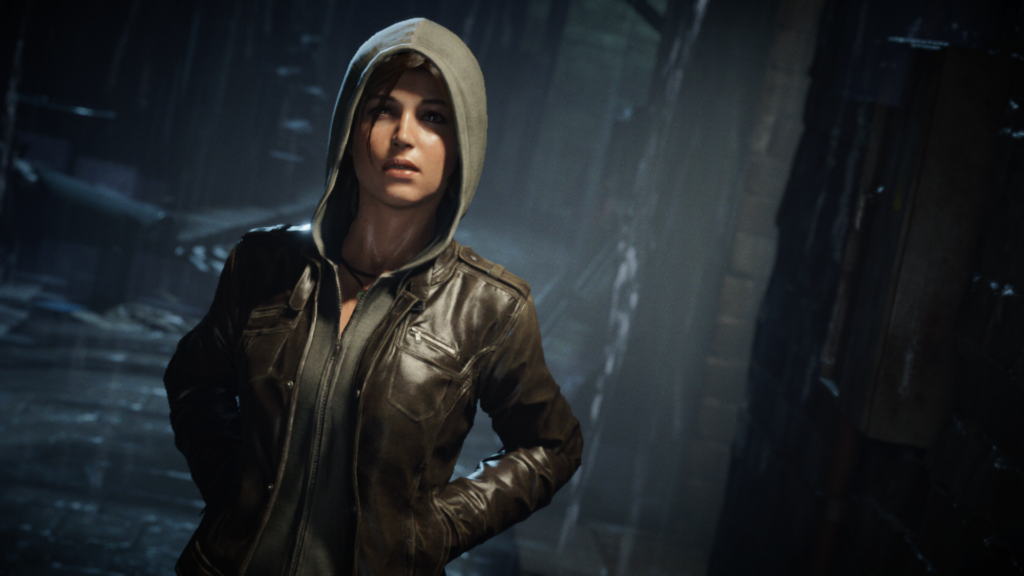 There’s betrayal, intrigue, flashbacks, hints of romance, gorgeous scenery, puzzles, and more action than a Michael Bay film. Right from the beginning things move at a breakneck pace and I had no issue with wanting to progress further into the story to learn the truth behind the Divine Source. From Syria to Siberia, Lara’s journey helps her unravel the mystery behind the item Trinity would kill for. At its core, the plot isn’t exactly an original one but it fits so well into the Tomb Raider universe, making use of stunning architecture, open landscapes, and a mesh of old and new technology that it’s easy to ignore the story’s cliched moments.

But don’t think the fast-paced speed means the game is all linear, though. If you had a chance to watch my Twitch stream, you’ll see that there are plenty of side quests and missions to take care of for a change of pace. You can collect relics, documents, listen to audio tapes, and even take part some good ol’ fashioned NPC quest lines.

The developers seem to have heard our complaints about the last game and almost every issue I had from before has been addressed. First off: No more quick-time-events! HALLELUJAH. And because of that, Lara’s “deaths” are infinitely less gruesome. Killing as a whole is secondary in this installment and for that, I’m grateful. Second: the entire skill point system is more forgiving, with level ups occurring much more quickly than before–which is useful since there are now so many more skills to choose from. And I’m not just talking “bonus XP from animal kills” useful. Third: hunting and scavenging now has a purpose as animals can be looted for skins, meat, and body parts instead of just experience. (Just like in the real world!) These parts are then used in a new crafting system to make unique ammunition, item upgrades, and larger pouches for any ammo rounds. With my penchant for being a completionist, I probably spent the first few hours collecting crafting items and I’m not even sorry about it.

What?! I don’t have to explain myself to you. Leave me alone. 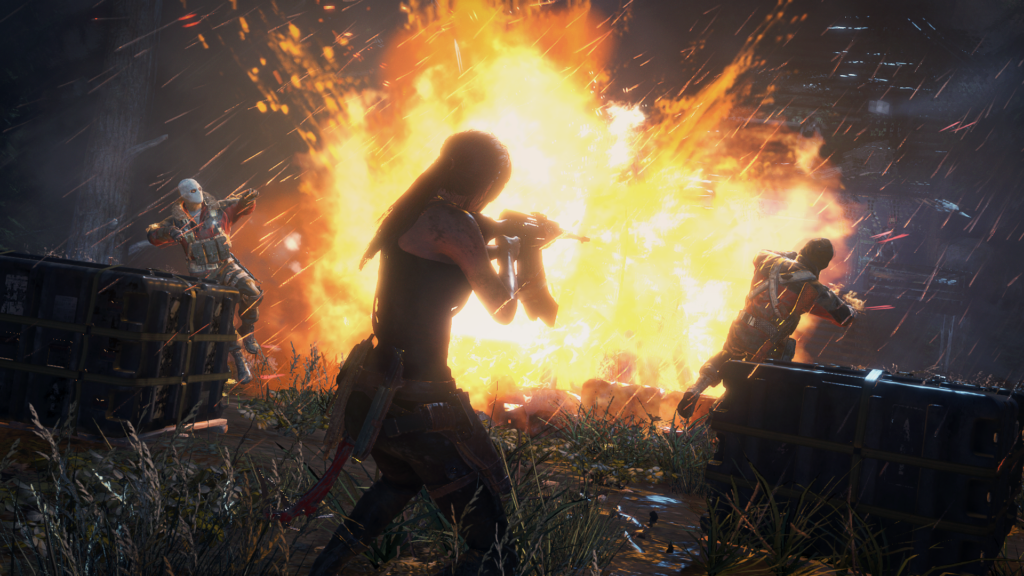 Speaking of weapons, ROTTR adds plenty of new shooty items to make your inner hunter scream with glee. On top of the usual fare, there are unlockable variants of the bow, pistol, shotgun, and assault rifle. Each of which can be upgraded to your heart’s content. Take that, bad guys. There are more ammunition types to use with your fancy new weapons, including poison gas arrows, grenade arrows, and hollow-point pistol rounds. Oh, and you get to use your pickaxes like a friggin’ grappling hook, which is cool.

I know you’ll all be shocked to learn that tombs are still a part of Tomb Raider and with a new game comes new, redesigned purpose. Instead of raiding a tomb and getting, say, a super convenient and modern shotgun piece as a reward, you now learn unique skills based on the tomb’s theme, like a new ability teaching Lara how to heal faster, and so on. The level design is superb and while some of the tombs still feel like baby town frolics, the challenge comes more from the main story’s puzzles and the use of the environment in large-scale battles. And it looks gorgeous all the while.

There isn’t much change in the mechanics of the game. If you played the reboot you’ll be able to pick up ROTTR and play without a hitch. However, the way Lara plays has been drastically changed. There’s much more of an emphasis on tactics than just running and gunning her way through a linear battle arena. ROTTR has combined Assassin’s Creed and Batman Arkham games fighting styles, making use of tree branches, bushes for hiding, and even a really cool underwater boss fight. Because of all this, I used Lara’s melee attacks significantly more than I ever did in the first game.

I do have some issues, but almost all of them are with the minor, forgettable characters. Jonah as a sidekick, while lovable, kind of fell flat for me. Instead, I personally would have loved to have seen Joslin Reyes by Lara’s side, as the comics have set up a nice dynamic between the two and Reyes doesn’t just blow smoke up Lara’s bum to inflate her ego. Or they could have made Sam Lara’s sidekick and given me more inspiration for all my Sam/Lara fanfiction.

Additionally, there’s the issue of giving Lara more “father” figures in her life. We get it. She lost her dad and then she lost Roth and she’s still reeling from both deaths. Inserting more father figures into her life seems almost…lazy. Moreover, the “villains” if you will, were nothing to write home about. Crazed, religious fanatics intent on “saving” the world by purging it of sin. It felt like a rehash of Tomb Raider’s Mathias and I expected better.

However, Lara does have nice banter back and forth with some of the characters, including this dialogue with enemies:

In terms of gameplay, there wasn’t much to fault. Swimming is a new addition to the series, but without the aid of some kind of a meter it became frustrating to even try to swim underwater. I recognize that a meter wouldn’t fit in well with the UI and it’s better to judge her air supply based on her vision, and the acquisition of a rebreather late in-game makes swimming a non-issue, but early on it was still a pet peeve that led to many a death.

Thankfully, there weren’t many bugs to contend with. A few quirks with jumping and climbing that I’ve come to expect with games like this, sure, but nothing game-breaking. Sounds were off a few times during major fight scenes, with assault rifle noises ringing out without enemies in sight. Other than that though, it was smooth sailing. Any real issue had been due to my idiotic gameplay.

I’m going to steal a line from Rob’s review of Halo 5: Guardians because I think its use is appropriate here: “Rise of the Tomb Raider may not be the best game, but it’s the best game for me.” As a huge fan of the series, this game does Lara Croft proud.

I don’t throw out high scores lightly but oh boy, did I enjoy the shit out of this game.

Previous article
‘Heroes Reborn’: Don’t Step on Butterflies
Next article
Has ‘Jane the Virgin’ Finally Made Her Decision Between #TeamMichael and #TeamRafael?