If you ask my 7-year-old, “What is daddy’s favorite video game series?” he’ll answer Halo. Ask him about my favorite individual game and his response is Halo 2. It’s more than just a love; it’s an obsession. I’ve read books, listened to podcasts, watched web-series and animated features set in the Halo universe. Halo is a big reason for my love of gaming as a whole.

I mention all of this because reviews are often looked at as being an impartial assessment of a product, but the truth is they aren’t. (Ed. Note: What happened to ethics in journalism!?) They are written by humans with personal taste and varying degrees of experience. This is important to keep in mind because while I try to look at each game as an individual product, in reviewing Halo 5: Guardians, my knowledge of the mythos has greatly affected my experience. With that said, on to the review.

Halo 5: Guardians finds players in control of two different teams of Spartans, Halo’s super soldiers. Blue Team is led by Master Chief, the greatest hero mankind has ever seen, in search of the Chief’s best friend and AI Cortana. The events of Halo 4 left Cortana’s fate up in the air and the beginning of Guardians she reaches out to Chief, calling him to come find her. Chief will let nothing stand in his way on his search for Cortana, whether it’s Covenant or Promethean.

Team Osiris is led my Spartan Locke, former Oni agent (and star of horrible live-action series, Nightfall), on a search for Master Chief and Blue Team. Chief has been declared AWOL and it’s Team Osiris’ job to bring him back. During their mission, they find themselves in the middle of a Covenant civil war and facing hordes of Prometheans.

The premise of Chief going AWOL in his search for Cortana and Locke’s steadfast dedication to the mission at hand sets up a promise of tension between the two teams. That promise isn’t fully realized and for good reason. Chief has been our hero for 4 games before this and is a sacred icon in the eyes of fans. His intention is pure (finding and saving his friend) and chances of fans ever siding against him are slim to none. On the other hand, Locke’s team is the one we spend the most time with, so portraying him as being in the wrong would result in players controlling someone they hate for the majority of the game. Nobody wants that. 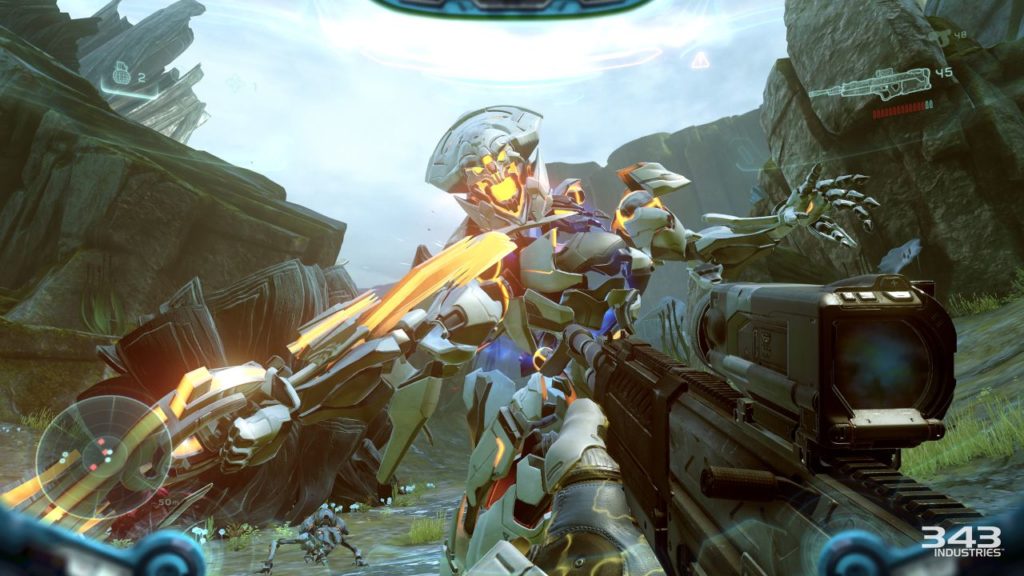 While the general theme is broad enough for players to be generally invested, it doesn’t do enough to keep new comers pushing towards its conclusion. The minutia and details of the lore require a previous knowledge of the universe, both from the games in the series and the multimedia outside of them, to truly appreciate and enjoy. I’ve talked to a few people who found the story to be a bit blah or confusing, while I found it engaging and engrossing. As far as story goes, enjoyment will vary on a person by person basis.

The saving grace of the Halo 5’s campaign is that, story or not, the game is amazing to play. Yes, I said amazing and I stand by it. The franchise has always had tight controls, but this time developers 343 Industries have taken to another level. Everything feels responsive and quick. The game runs at a steady 60 FPS, both in campaign and multiplayer. The added mobility from unlimited sprint (finally!), sliding, boosting and clambering make this the fastest Halo to date.

As a tradeoff for the steady framerate, Guardians features a dynamic 1080p resolution, meaning that when it needs the resolution, it drops to accommodate the 60fps. Truth be told, I found the game to be gorgeous and never noticed a drop in resolution. It may not be the best looking game out but I believe you’ll be hard-pressed to find one on consoles that looks this good and runs this great.

With the story focused around two teams of four Spartans, Halo 5 supports up to 4 player drop in, drop out co-op or the ability to issue squad commands in single player. Co-op works beautifully, with each Spartan having a different starting loadout and differing perks. More than once, I found myself yelling at my friends to help me out with an enemy then screaming out “woo” when we pulled off the kill. Playing with friends is the most fun I’ve had with a campaign this year.

Going solo however, doesn’t quite have the same punch.

When playing alone, the game defaults to you controlling either Locke or Chief, with the ability to issue simple commands to your team. You can tell them to move to a spot, focus fire on an individual enemy or to pick you up when you go down. The AI isn’t bad, it just require a ton of micromanagement to be successful. All too often would I be down, screaming to be picked up, only to watch my teammate stand there motionless. I still had fun playing through the campaign alone but nowhere near what I experienced with friends.

Now, while I am deeply invested in the story of the Halo franchise, I know that many people only come to these games for the multiplayer. I’m happy to report that Halo 5 has my favorite multiplayer since Halo 2 (and possibly my favorite period). Just like in the campaign, the added mobility adds some much-needed speed and fluidity to the competitive online play. 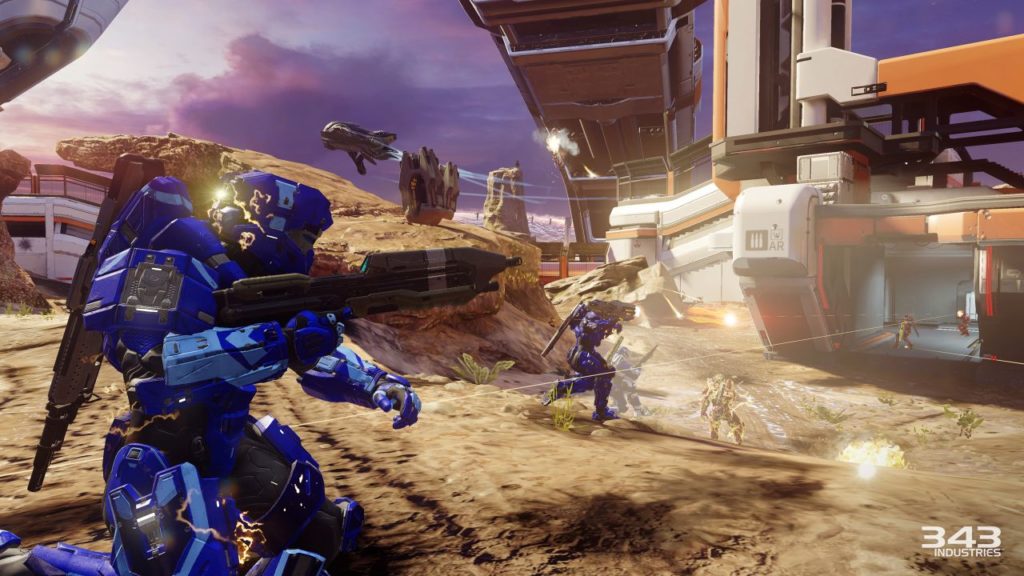 Online multiplayer is broken into two main sections: Arena and Warzone. Arena is where you will find the traditional multiplayer suite like free-for-all, Swat and team slayer. It’s also where you will find my new favorite mode, Breakout. Breakout is a 4 v 4 match, with a neutral flag and no respawns. This resulted in a number of matches ending in thrilling one on one duels.

The maps are also smaller and close quarters in Arena. The map design reminds me of Halo 2, where each map has recognizable, distinct areas, making callouts easier for your team. There are plenty of levels that I love and as a whole, I have yet to find a map that I hate playing on, which is rare in an online shooter.

The other section of online multiplayer is Warzone. Warzone is a new addition where teams of 12 on 12 are joined by AI marines on a large map. The objective is to be the first team to score 1000 “victory points” or by destroying the opposing teams core. “Victory points” are earned by killing opposing players, holding one of three bases, or taking down AI controlled neutral bosses. These bosses range in difficulty and are worth anywhere from 25 to 150 “victory points”. Alternatively, if your team controls all three neutral bases, then the opposing team’s core is exposed and can be destroyed resulting in an instant victory.

The inclusion of the “instant win” mechanic and the neutral bosses leads to matches that aren’t decided until the very last second. While it is possible to dominate as a team from start to finish, most matches have a back and forth nature. It is highly unlikely to ever be truly out of a match before it is over.

Warzone is also the mode that introduces Requisitions and Req Points. Throughout a match, you earn the ability to unlock different and more powerful weapons, vehicles and boosts. These are represented by Req levels and you spend Req points. These Req points are gained over time or faster with success on the battlefield. The caveat is that you can only call in certain items if you already have a Requisition for that item. Requisitions containing weapons, boosts, vehicle or cosmetic items are found in Req Packs that you open up outside of a match with either in-game currency or real money. Yes…that’s right… microtransactions. Here’s the thing: you earn so much in-game currency just playing, that there is no need to spend any real money. Although I understand any microtransactions leaves a bad taste in the mouth of some gamers.

Look, I opened up this review explaining my history with and fondness for Halo. Taking that into consideration, Halo 5: Guardians is the perfect game FOR ME. It’s a game that rewards knowledge of the universes lore while being a bit less forgiving to those without it. That being said, I am still confident recommending this game to anyone because of how well it plays and how much fun it is. At the end of the day, videos games should be fun and Guardians is the most fun I’ve had this year.

Halo 5: Guardians was reviewed on the Xbox One.

Previous article
Happy Wednesday! Have Some ‘Star Wars: The Force Awakens’ Character Posters
Next article
An Open Discussion About ‘Arrow’ and the Lack of Consequences