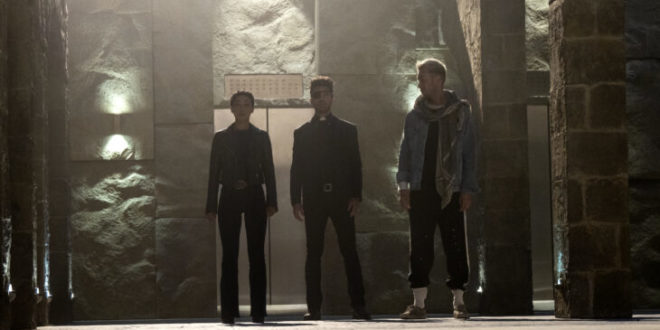 Continuing whence last we left off, Jesse (Dominic Cooper) emerges from the bathroom, sporting the type of headgear that would have Snake Plissken nodding in approval. Tulip (Ruth Negga), ever the initiative one unrepentantly admits to Jesse that she and Cass (Joseph Gilgun) had a tryst and neither are to blame for that in his absence. Of course, being to Hell and back gives you a tinge of fucking perspective, which Jesse now possesses in spades. He loves them both and wants to help them rescue Humperdoo (Tyson Ritter). It is in this penultimate episode of the Preacher (AMC) series, “Overture” where the reeds clear, the strings pluck and the proscenium lights up as the house lights go down.

At Masada, the Grail is alight as Humperdoo is bathed, primped and primed for treading the boards. Jesus finally gets to meet his child, but that means nothing to anybody- not to the Grail and most certainly not to God. To them, the one true Christ-child is no more than a titleholder, a figurehead. The only “Stock” anybody ever ascribed to him were “answers.” Slowly, he’s catching on and you can see it in his wistful eyes. I guess knowingly being crucified wasn’t enough.. and I’ll bet ya, if we’re going on him existing in this world due to his Second Coming, I bet you he left that sepulchre because of Mary Magdalene, who was probably one of the most down ass women he knew. Hey, Huey Lewis sang it best: “That’s the power of love.”

Back where preparations are in order, we are treated to a glorious one-shot of the chaos behind the curtain as Humperdoo is lead to his dressing room, where Papa (Mark Harelik) awaits. We see a ballet company and a mime troupe to boot, making me think this is more of a Disney World Showcase before everyone is annihilated. I mean, it goddamn well beats the House of Mouse price!

Back the Holy Bar and Grail, Jesse takes his shot as commanding the animals through Genesis. They don’t seem to be responsive. No matter, along with Cass and Tulip, the trio harken upon their fine winged friends, the in perpetuity fighting Angel/Demon lovers as their Valkyries into the storm.

Back in the Pensacola station, the feed of “It’s Morning In America” being shot up by the crazed FBI agent is so rudely interrupted by the unchangeable transmission of “The Apocalypse 2020 Variety Revue“, hosted by the beauty-bathed Klaus Starr (Pip Torrens). The 60-minute special is to culminate in Humperd- sorry, the Messiah‘s big number, signaling down a Hellfire (how ironic), of which only the righteous will be spared. Deviants and apostates will have to face their just desserts.

As Tulip, Cass and Jesse are dropped off, both Angel and Demon pray request Jesse to take care of their child. Now for a while, since they were introduced, I had an itch that they, the exiled would play a bigger role. This series, though with its lulls and highs to me does very little superfluously or, better put, without reason.

As God relays some of his exploits to Humperdoo, a familial knock is heard. Why, it’s ya boy, Jesus. You remember, right God? The one to remind your creation that they are fallible and then punish him as an example? Oh, I love this series because it points out what is so silly about it. Anyway, Jesus comes back bearing roses for the talent and one last performance to possibly change his dad’s mind. Nope. Even with the help of Adolf Hitler (Noah Taylor) could Christ get even a twitch in his Dad’s fucking trousers. Ouch. However, as we see, one hair was harmed on Humperdoo’s head by his beautician and God went, well, God. He cast her through a fucking wall.

Falling in line with a little bit of pain, we see for the first time I could remember a very comic panel-ish montage of Tulip, Cass, and Jesse laying the smackdown on Grail security en route to “rescue” Humperdoo. See, Jesse knows what needs to be done and what shouldn’t cloud their judgment. Ha, that’s a funny word considering them arriving at an empty Cathedral only to have the show go on above them. Cass and Tulip lose Cass and go looking for them. Has their judgment already begun?

Checking in back with a now guitar-clad Eugene (Ian Colletti) singing “Closing Time” by Semi-sonic (I love how they are a joke now), he’s told by a berating Priest (Marty Rhone) that God may have no plan with him. Arseface still thinks- “Supastaahh”. Eugene might be the cruelest joke of all in this entire series. He’s God-fearing, looks for the good in everybody, is inherently clueless. Still, he retains hope in a hopeless deity. You know, if only Lenny had a guitar…

As a drum corps and color guard celebrate above in view of everyone in the entire world, Jesse and Tulip still call for Cass like a lost puppy. Sadly, we find out this is what Cass truly is, as God takes him hostage. God tempts Pronsias with his true temptation: winning the war, coming back home to the warm embrace of his family, his mate’s life intact. Even then though, getting a taste, like Heroin, Cass knows that happiness isn’t real. Still, all he has to do for that VR in perpetuity is to give up his IRL life-mate, Custer.

Speaking of, Jesse and Tulip, God stops their elevator. It’s time for his next interview. Tulip reassures him that everything’s going to be fine and that she read the letter. She has faith, but seemingly not in god but in herself. She exits.

While on Humperdoo watch-dog duty, Featherstone (Julie Ann Emery) is relieved by her post by Herr K. Starr. It’s New World’s Eve. She can take the night off. Thus ensues one of the most awkward and stringent seductions possible by Starr to his partner. As a hater of Mathematics because of how boring it is, if Math numbers could fuck, this would be their Overture.

Our most adorable vampire tries to reason with God, but no amount of honest talk could outdo God’s cutting to the core of Cassidy as being “a tired little boy who wants to go home.” That line was fucking brutal because it’s basically the last time Cass felt anything emotional as a human. His whole journey since then has been trying to find that feeling. Also, I’d not heard his name said out loud or don’t remember it until now. It sounds like Pontious…

As the Mowri act finishes, a very naked Starr but very clothed Featherstone have that ‘making it weird’ moment. She fears the time is finite and he fears now that it is too, as the first draft of the plan was total destruction and the revision was just decimation. Well, looks like Klaus-y made a mistake giving shit to the currently dead Hoover Two (Aleks Mikic). Besides which, according to her fuck-buddy, Featherstone would never get into Heaven anyway, given her forearm-to-fist sized strapon (it’s a beauty) she used on Herr. For Starr, it was all about the good stuff, never the trial.

As Tulip breaks from the elevator shaft, she’s met by God, who gives her a choice. To join or not to. Free will and all of that bullshit. Oh, she will join him, but not before he clears the room with another’s blood.

Back in Jesus’ (Tyson Ritter) chambers (funny, now that I think about it) Hitler seems like the best friend the Savior actually has. They get drunk and a Filicide is implied by Adolf. Though Jesus ain’t a killer, Hitler may raise eyebrow and Christ’s toast…

So God’s now with Tulip. He knows this person is a hard egg to crack, so head games it will be. He threatens her with Jesse’s death unless she sits, but in sitting, she is obeying him, even though she had free will. He’s going to have fun with proving her wrong.

Back in the elevator, though having heard nothing from his friends, he commands Genesis and it seems crows come out. Now I don’t know that for a fact, but I think Jesse has an endgame.

God wants any fight in Tulip and though Tulip is cool as a cucumber, God knows they can be sliced through a grater. He purchases her anger not in threats or with name-calling. He does it in 30 seconds, 1 tragic memory and 3 words to answer for it: “I can’t remember.” She loses it and lets off her slugs before he slugs her. Well, looks like Cass is being fed.

The elevator goes back online for Jesse to which he finds a completely disemboweled and dismembered Cassidy. The poor vampire, tears in his eyes tells him that he didn’t deny him for the longest until he did. God coldcocks Jesse with his best friend’s leg before dragging him to his doctor’s appointment. Hey, ya gotta extract something sometime, right?

Back on the Melbourne streets, Eugene’s a free man, he’s got a twinkle in his eye a spark- oh no. He was run over by a Taxi. Sparkle died when he started belting out.

Back in his own house, God takes Jesse to church. He wants only one thing and that is Genesis, a power to possibly rival God’s. Upon commanding, Jesse won’t willfully give it up, which might be the whole slice in the armor of the Almighty.

As Tulip tries, through guns and grit to blast through the door, nothing is doing the trick… until maybe another pissed off rival does?

As Hitler tries to sneak out, plastering Jesus with alcohol, JC stops him. He still doesn’t believe in murder and through a little shoving, they might actual get into a full-fledged fight, which I’d like to see.

Herr K. Starr, no matter the amount of Tech Support can’t get the Fax Machine online. I think the offices klaus@5Starr.com are fucking out. Try back tomorrow.

Finally, we end the working day on God growing tired of Jesse’s charade with being so damned resilient. I mean, the thing is, if He is his own image created us with free will, why not a Triumphant Will?

God attempts to shake it from him, but the Earth rattles. It’s the grande entre of the Killer of Saints (Graham McTavish). God himself knows everybody has a price and he also knows what a timeline is. He and William have a history and the only thing standing in front of his freedom and happiness, Jesse.

What I’ve realized from this episode… God’s a pussy and a bully. He’s created a sleeper cell so he can use it in his last moment, only to torment him so he can have up this built purpose. It’s a nice fail-safe, but I believe this will have an awesome controversial ending.

Either way, we will be watching next week when we get to meet our maker end.

Robert J. Kijowski is a screenwriter who enjoys a good chuckle and an even better weep when indulging in art both good and even better bad. He enjoys the company of strangers in a theatre but adores the camaraderie of friends watching Netflix. He also loves to talk- a lot. This can be read through his recaps and reviews on the Workprint or heard through his weekly movie podcast, After the Credits. His presence can be felt through Facebook, Spotify or Ouija. Don’t use the latter though- he almost always ghosts people.
@writer_wronged
Previous FFVIII Remastered Review: This is The Best Way To Play
Next FFVIII Remastered: Tips and Tricks 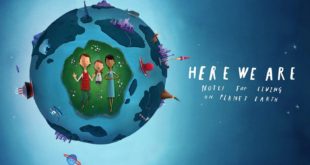 ‘Here We Are: Notes for Living on Planet Earth’ Review