Final Fantasy VIII Remastered may be an upgrade to a nostalgic classic, but its unique junction system is not the easiest to learn given the poor in-game tutorials.

To help, here are some helpful general game tips as well as some tricks for veteran players seeking to do a perfect run.

Your active party should have every GF junctioned. Your GFs are what make your character special and the ABILITIES learned mean more than the attack of the GF itself.

You should always refine better items and magic in the ability menu. Early CARD MOD or MID MAG-RF (both from Quetzalcoatl) help tremendously before the SeeD field exam. 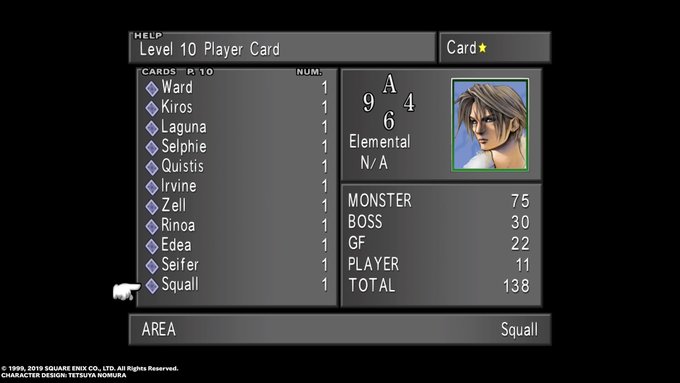 You can start playing Triple Triad immediately. There’s even access to some of the rarest cards in the game at the beginning in Balamb Garden, as the kid running laps around Garden has the rare Mini-Mog card and the Trepe Groupie at the back of the Cafeteria has the ultra-rare Quistis card.

A big reason Triple Triad works is that you’ll have access to stronger cards over most opponents just through in-game progression. This is not the case if you must play with a RANDOM hand caused by the RANDOM card hand rule in Dollet or Trabia.

If your opponent asks to combine rules, deny them, and re-challenge until they stop.

FFVIII monsters scale to your team’s level as you progress. It’s very easy to over-level someone in this system, which is why it’s oddly better to avoid battles until you can unlock certain stat bonuses from GFs.

If you do end up battling lots of monsters, try carding them instead. CARD is one of the most powerful abilities in-game. Use it on a monster at half HP and you’ll turn it into a card. You gain no EXP but keep all the AP.

A great place to AP grind early is the beach outside of Balamb fighting Fastitocalon-F’s. You gain 6AP a battle and will have lots of fish fins to convert into mid-level water magic at the very beginning of the game.

You can gain bonus stats every level up through the following GFs.

You can gain the best junction stats from the following spells.

You can obtain the best spells in the game in the following places.

Islands Closest to Heaven and Hell

These legendary Islands are the best place to level grind. Every monster encountered is Lvl 100 and you can draw powerful magic spells both against enemies and even straight from the ground.

Located in the Western and Easternmost islands on the world map, both are reachable by Ragnarok in disk 3. They are also easy to kill using the following limit breaks: Squall’s Renzokuken, Irvine’s AP Ammo, and Quistis’ Blue Magic: Degenerator. Just look out for Marlboro’s Bad Breath which inflicts every negative status in the game. 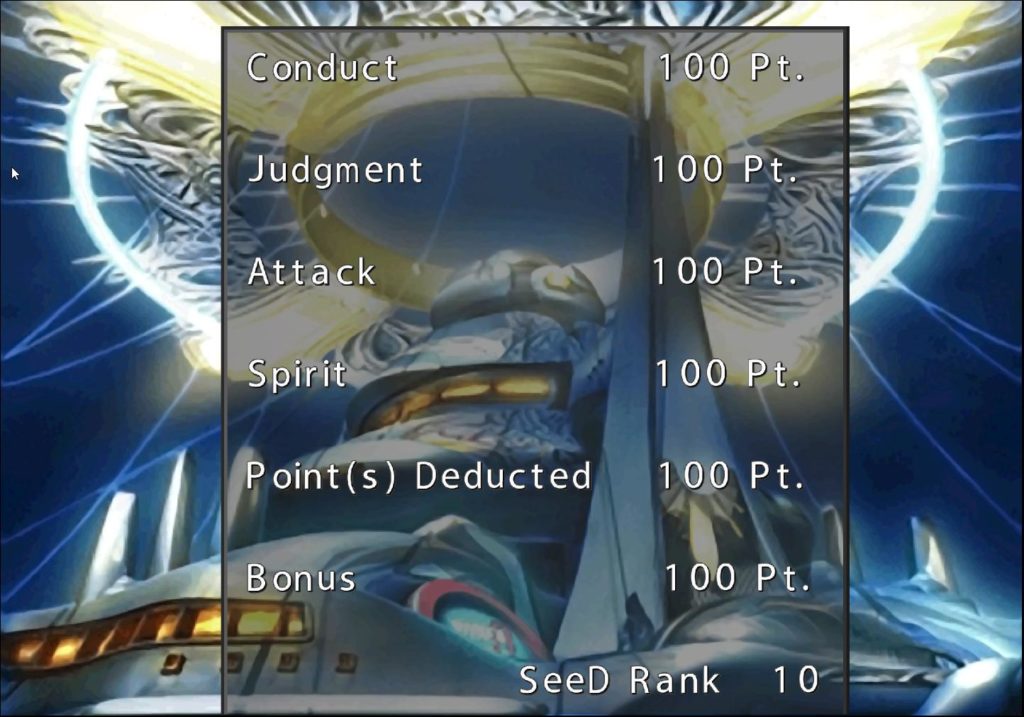 How To Obtain a Perfect Score during the SeeD Exam

There’s an excellent guide to this on GameFAQs but for the short version:

How to Gain Infinite Gil 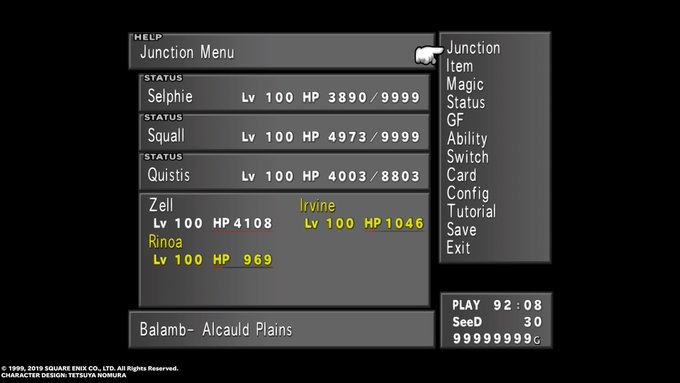 First, visit the second Esthar item shop which sells special items (Johnny’s Shop). If it doesn’t open, just keep selecting it and eventually, it’ll appear. After you obtain the Tonberry GF, the store will appear as ‘Esthar Shop!!!’ under the Call Shop ability.

Second, use this store via Call Shop to buy tents and cottages.

How to Obtain Perfect Stats with Junctions 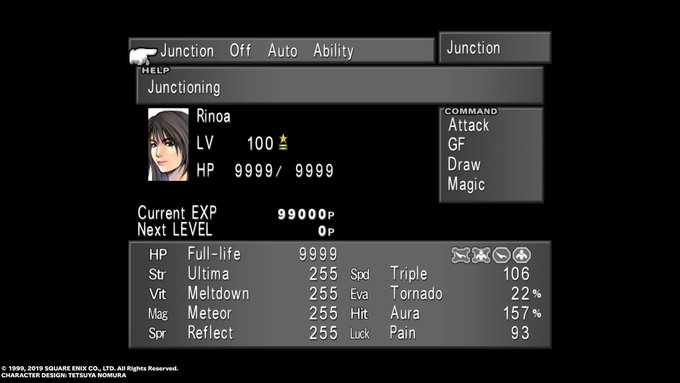 255 is the maximum value for the base 4 stats. To max everyone, you need to optimally grind using the Stat Bonus GFs, two characters at a time (keep one KO’d), equipping nothing but bonus abilities like HP BONUS or STR BONUS.

This means one character should have Cactaur and Bahamut (who has Abilityx4). The other, should have Ifrit, Siren, Carbuncle, Leviathan, and/or Brothers, along with a GF who has learned Abilityx4. The goal is to hold off on leveling until late-game and then grind every character to LVL 100, two at a time. Personally, I did Quistis and Zell, Irvine and Selphie, and then Squall and Rinoa.

How to Obtain Perfect Stats Without Junctions

It’s possible to have perfect stats for every character without using junctions. To do this, do the method above and then amass large quantities of Stat Up items. However, this method costs a lot of time using the infinite Gil trick.

Where To acquire Stat Up Items

SIDE NOTE: Maxing Luck requires hundreds of Hours killing Tri-Faces. The best place is at the Deep Sea Research Center.

Rosetta Stones are the only way to learn Abilityx4 outside of Bahamut. One is gifted to you at Cheryl’s Store located in Esthar Mall. Just keep selecting the store until it eventually opens.

However, a popular topic amongst perfection runners is farming Rosetta Stones, as the item can be refined into many powerful tools. An unlimited supply of them is available at the D-Strict Prison, where you can win them from the 11th-floor cardplayer for 200 Gil a game (The probability though is very low). There’s also this method below, which I’d never tried before.

To accomplish this longstanding quest, you’ll want to have finished the Chocobo Forests and Queen of Cards quest on disk 3, along with having reobtained the Ragnarok on disk 4, to pull this off.

At the end of the game, the best items and weapons come from, unsurprisingly, triple triad. You can challenge Left Diamond of the diamond Duo CC club aboard the Ragnarok.

She’ll play any rare card you’re missing in the game over-and-over so long as you are missing it. You can infinitely Card Mod ultra-rare cards into the most powerful items this way.

What most people forget about (including myself during this run) is that Left Diamond will also be playing using TRABIA’s rules, including the very annoying RANDOM rule.

Here’s a secret on how to get RANDOM abolished in disk one so that you can card mod to your heart’s content.

Every magazine can be bought in Esthar except four.

Occult fan 3: Master Fisherman Quest. Talk to the Master Fisherman after crashing Balamb Garden in FH. He’s the old man in the cutscene, located below a ladder and across a long metal catwalk.

Occult fan 4: Esthar’s Presidential Aide before Lunatic Pandora. Talk to him during your first visit to the city, and then talk to another aid at the airport who’ll ask Squall how they like the city. Return to the Aide and he’ll comment on the president’s book choices, leaving behind the magazine as he walks away.

Weapon’s Monthly First Issue: During the flashback behind Doctor Odine at Lunatic Pandora while he’s discussing research. You’ll be Laguna during this part. Don’t worry about getting caught while sneaking up to him (You’re the loveable Laguna after all).

Timber Maniacs: The issue aboard the White SeeD ship. It’s located next to Zone, who’ll ask you about the ‘Girl Next Door’. You should also win the ‘Shiva’ card from him while at it. 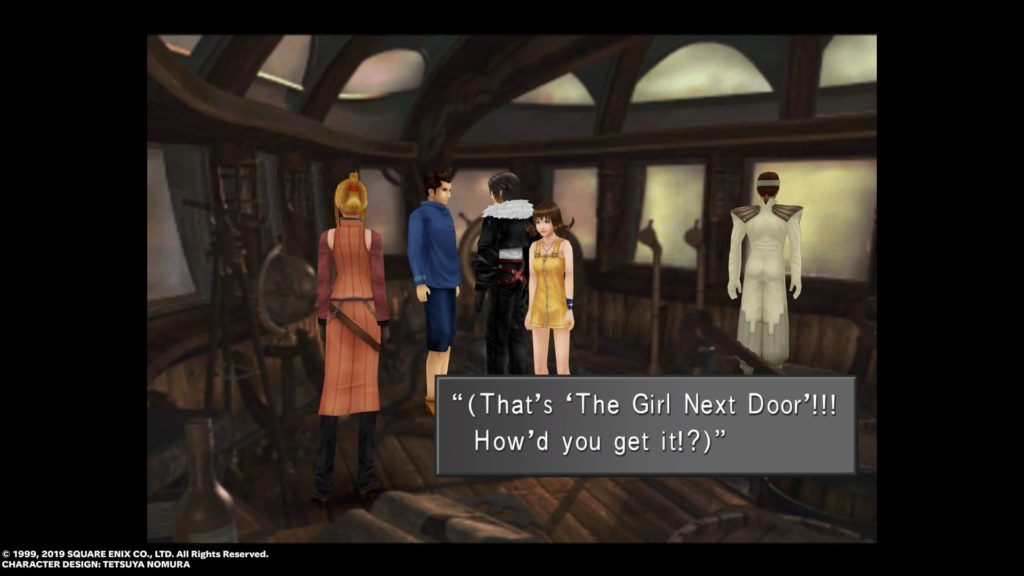 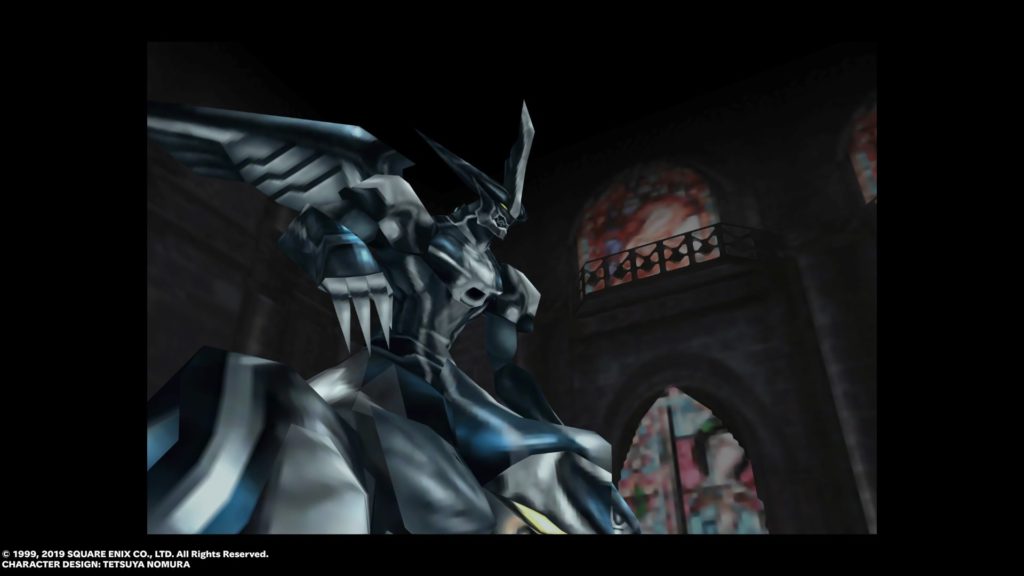 Honestly, the only big challenge to this game is defeating Omega Weapon but I won’t spoil that for you. It is necessary to beat Omega to obtain the Lionheart Platinum trophy for PS players.

Using the secrets above it should be easy though.

Most of the information here was taken from the original GAMEFAQs walkthrough, which I personally used as a kid over a decade ago, and which I found a lot more useful than the IGN version.

For a perfect run walkthrough, I’d check out Absolute Steve’s guide below, as he’s known for his expert work and his guides had been a lifesaver back in my hardcore gaming years.

Tomorrow, I’ll be posting the last part of this FFVIII Remastered feature, where I talk about the game’s story, looking back, and just how much a video game can influence a person’s life.