‘Pitch’ and the potential for platonic relationships on TV

If you’re looking for reviews, be sure to check out Alyssa’s pieces on Pitch.

Two episodes into its rookie season and Pitch is so much more than just a Fox sports opera. It’s refreshing to see a show like Pitch take a young, budding black actress in Kylie Bunbury and put her at the helm, all without relying on overdone racial stereotypes. Not only is Bunbury’s Ginny a strong woman faced with a heavy burden, but she is surrounded by relationships new and old which serve to create the bulk of her drama. It is in these ships that we can see the start of something so rarely seen on television: the platonic relationship between male and female leads.

Since we’re only two episodes into the season, this article may also serve as a “could have been” depending on how the rest of the episodes play out, but for now, I have hope that Pitch can stay the course.

Platonic relationships between men and women are so rare on mainstream television that it’s hard to name a popular show that did them well: Friends is hilarious with how incestuous it became by the final season, love triangles have run amok since the dawn of the CW network even spawning the dreaded Olicity ship on Arrow, and Homeland stupidly ignored my plea when it came to Carrie/Quinn. Romantic involvement for the sake of tension does not make a good show and for the love of all things, Pitch has plenty of material to avoid stooping to such levels.

Thankfully, after two episodes, Ginny doesn’t even seem remotely interested in romance. In fact, most of her drama stems from grappling with her newfound feminist responsibility in a traditionally male world. Even in her flashbacks, Ginny doesn’t reminisce about an old flame, but instead about the (sometimes borderline abusive) relationship with her late father as well as the (absent?) relationship with her ex-agent brother. Ginny doesn’t have time to fall in love, nor does it seem like she wants to. At dinner after her first major league win, her teammates asked if she had ever dated another ball player and she emphatically put them down.

While I’m not saying that Ginny won’t ever find romance, in a world surrounded by men there needs to be boundaries. There are men she simply cannot date, lest the show lose credibility in my eyes; we, as viewers, need more shows that allow men and women to work with one another without–GASP–them falling in love. Pitch can do just that by avoiding romance with two of the show’s male leads.

Most shows with successful male/female platonic relationships have played heavily with the mentor/mentee role. Parks and Recreation and 30 Rock are two of the more popular examples of such a relationship, but that doesn’t make them any less effective. Despite the age difference, had Liz Lemon and Jack Donaghy eventually hooked up it 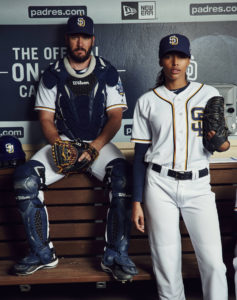 would have destroyed the heart of the show, but viewers still expected the romance because it’s so remarkably common.

On Pitch, the same could be argued with Ginny and Mike Lawson, the catcher and captain of the San Diego Padres. There’s an age gap between the two of over ten years, but that’s never stopped shows before. However, Lawson is a season veteran whose experience is integral in helping Ginny navigate the MLB landscape. By throwing romance into the mix, you run of the risk of Ginny losing a valuable resource, permanently, and it’s clear that for, at least a time, she needs his guidance. Lawson is the one who, in episode two, inspired Ginny to move forward when she struggled with her responsibilities; he’s the one who tells her how important her role is on and off the team, thereby spurning her into giving an amazing speech on Kimmel.

Lawson: “You’re bigger than the game right now, rookie. Nothin’ you can do to change that, so at least use it for good.”

There are definitely some red flags when it comes to Lawson. His wife is now in the “ex” category, so he’s available. But Lawson, though represented as a bit of a ladies man, doesn’t seem to look at Ginny the way you’d expect from someone who is interested in being romantically involved. He’s a captain, first and foremost, and nothing would damage his team more than if its pitcher and catcher fell in love. (Heh. Heh.) Let’s keep it that way. On top of that, there’s the potential relationship brewing between Lawson and Amelia at the end of “The Interim.”

I refuse to believe that there was ever any kind of romance between Blip and Ginny. Blip and Evelyn are too adorable to ever think wrong of them. Not to mention the fact that Ginny and Evelyn have a solid relationship rooted in trust and honesty. Would a past relationship stir the pot? Of course, but it’s also at a point where it’s beyond expected. Pitch doesn’t need to give in to the expected, otherwise it’ll veer into soap opera territory and Pitch deserves better than that.

Blip is the friend Ginny needs when the going gets tough. Where Lawson offers unflinching honesty, Blip has a kindness to him, an understanding, that Ginny needs when doubt begins to rear its ugly head. Since we have yet to see Ginny’s brother in the present time, Blip acts as that protective big brother. Of course, Ginny doesn’t exactly need a big brother, but it’s nice for her to have a familiar face on the team as well as a confidant she can trust. And maybe it’s just me, but I also think it’s nice for Blip to have her around as well. I’m definitely eager for more conversations like this:

Blip: “You know as much as I love livin’ off of Ramen noodles, the wife had other plans.”
Ginny: “I bet she did.”
Blip: “She spends everything, Ginny.”

While Lawson and Blip would be the biggest no-no’s for a romance, I think any fling with any of Ginny’s teammates would be detrimental. Ginny has said it a dozen times over the course of two episodes: she is a ball player. Please, Fox, tell her story without sacrificing her healthy platonic relationships.

Previous article
‘How To Get Away With Murder’ Review – “There Are Worse Things Than Murder”
Next article
‘Van Helsing’ Review: Vanessa Bites Back