How to Get Away With Murder
Season 3, Episode 2: “There Are Worse Things Than Murder”
Original Air Date: September 29, 2016
Grade: A

There may have been a bit of truth to those signs being posted around the campus marking Annalise as a killer. Episode 2, “There Are Worse Things Than Murder,” opens with our favorite How to Get Away With Murder lawyer being questioned as a suspect in the murder of whoever is laying on that stretcher. For sure, we know it’s not Oliver, who actually was my first guess given how unnecessary he is to the show. We do know however that it’s someone who may not be worth all of the emotion Annalise demonstrated in the previous episode, as she handed Oliver a cell phone to erase whatever incriminating evidence it holds. Oh, Annalise: always finding a way to get over on the law.

Flashing back to two months earlier (you really have to start wondering in what time does this show actually take place given all the flash forwards and backs), we see that Frank has killed the private investigator that Annalise sent on his tail. One of the most confusing things about this Frank storyline isn’t so much the progression of him from being the most loyal man in her life to a wreck of sorts, it’s trying to understand why it got this far and what the goal for him is. It’s hard to get in the mind of someone so closed off as Frank, which may be to the benefit of the audience as this is a murder mystery of sorts, but it can make it difficult to really be concerned with his whereabouts. 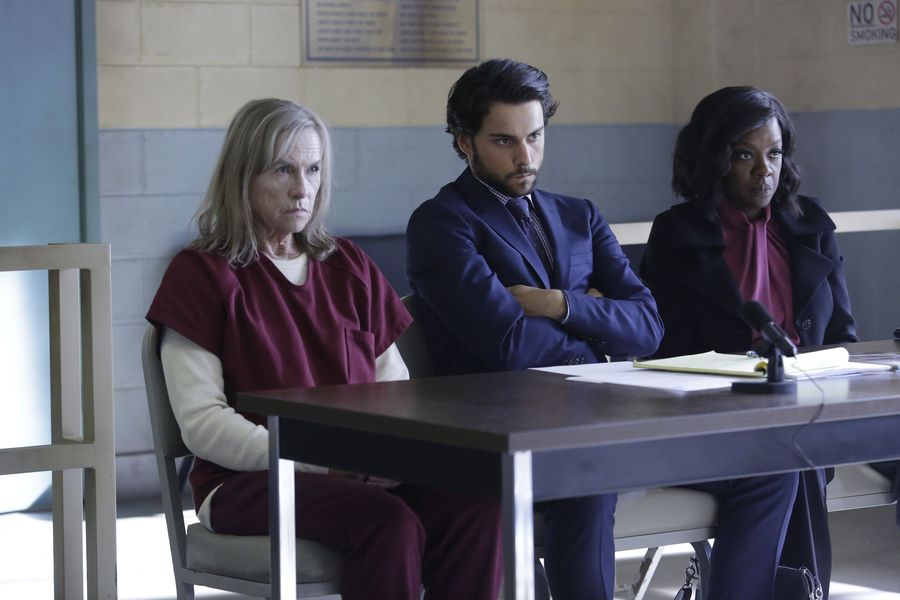 One of the strongest pieces of this episode in particular has nothing to do with the ongoing search for Frank or who actually is dying this season, but instead the court case that Connor takes on concerning a woman who was domestically abused for over a decade before deciding to end her husband’s life, which landed her in prison. While she’s had several parole hearing, it’s been to no avail but Connor is determined to make a difference and change the outcome. While Annalise may not approve of Connor’s edgier tactics, he manages to be realistically victorious in granting Irene with her freedom.

Meanwhile, the relationship between Wes and Annalise is just as strange as it’s always been. In some ways, I feel bad for Annalise because of the amount of guilt she carries in regards to Wes and burying all of the secrets away from him. She carries this maternal cloak over him trying to protect him when she needs just as much protection as he does. Is she even the right person to be protecting him to begin with? There are so many questions involving those two. Annalise asks him to move in to her home and he denies her request yet shows up with dinner later on, thereby proving they’re just as confused about each other as we are.

Connor and Oliver also are a ball of confusion about what their lack of a relationship really is. At this point, I’m just hoping it’s not Wes on that stretcher and it’s more like Bonnie. The woman looks so much like Sarah Paulson and it’s driving me insane. She’s like fake-Sarah Paulson.

But all in all, the murder mystery and confusing soap opera that is this episode and series altogether, does its part in exposing audiences to the harsh unfair treatment of women, especially abuse victims, when it not only comes to the law but within the prison system as well. For that alone, it makes for a very necessary episode.

How To Get Away With Murder airs Thursday on ABC at 10pm EST.