This week on Van Helsing, Vanessa and Axel take a trip outside and we get more glimpses into the early days of the Rising.

All is still tense within the hospital as some of its current inhabitants want to give Vanessa over to the vampires. While I get that they are freaked out by what they don’t understand, they shouldn’t be this freaked out by her. She reverted Flesh (the vamp from last week) back into a human again after all. The poor dude is being treated like crap of course since they aren’t really sure what’s going on with him either. Still, they can’t just outright kill him since he’s technically one of them again.

At one point a group of vampires outside try to rouse the group via John’s wife whom they’ve taken captive. The poor woman is tied to a tree outside and is being tortured, which sends her husband over the edge and he takes Vanessa at gunpoint yelling to the vamps that he wants to trade. This was pretty stupid because 1) she was volunteering to go anyways and 2) because they would probably kill his wife all the same. Axel steps in though and shoots John’s wife in the head because he thought it was the merciful thing to do. The other man goes nuts and they get into a scuffle that leads to the windmill breaking. This is not good because it had been powering the whole hospital, including the UV lights, which were keeping the vampires away. Axel calculates that they only have 3 hours left of energy before it all goes off.

He then decides to venture outside to look for spare parts to see if he can get the generator working again. Not confident in her other companions, Vanessa chooses to go with Axel who asks her to promise that she’s not going to just take off the first chance she gets. Somewhat reluctantly, she agrees and they precariously make their way to the basement of the hospital. After a near encounter with some vampires, they head to the shipyard where Axel says that he has to look for the spare part in the lower part of the ship that’s submerged in water. He hands Vanessa his assault rifle, ties a rope around himself, gives her the other side and tells her to pull hard when it’s time to go when vampires show up.

As Axel disappears into the water, the once comatose woman looks around nervously because she knows the creatures are gonna be up in her face sooner or later. And of course a less than five minutes later one shows up and she tries to shoot them while still holding onto the rope in the other hand. But then a second one appears and Vanessa is tugging on that rope as hard as she can because she needs the marine to hurry up or they may both get killed. Thankfully he does and they each take a vampire. The one Vanessa was handling ends up biting her and he reverts back to being human again but the gunshot wounds end up killing him because he wasn’t able to heal quickly enough. For a split second is then considers taking off to find Dylan but Axel tells her to face reality that there is no way her kid could have survived this. In his mind no matter what he goes where she goes because that’s his mission. You gotta hand it to him for sticking to his guns but also I think in the chaos of this changed world, Axel clings to his marine duties as a way to cope. It gives him a sense of purpose when everything has gone to hell. She begrudgingly agrees and decides to go back with him. 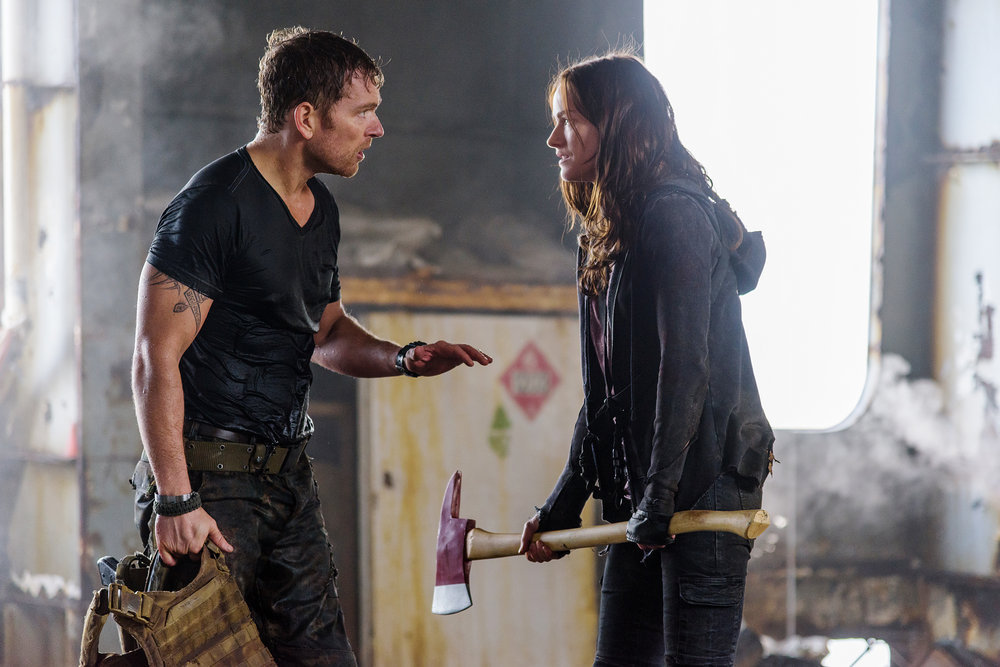 As they near the hospital that’s currently under attack by another group of vamps, Flesh unexpectedly comes outside and they seem to recognize him. He talks to their leader that he had been made human again and that she’ll (Vanessa) will do the same to them unless they get out of here. To prove it, he cuts himself and shows that he bleeds. This seems to freak the vampires out because Flesh asks them if they want to feel again after all the blood that they’ve drank. His words apparently are enough to cause them to flee.

Once the duo is back inside the building (though Vanessa takes the body of John’s wife inside beforehand), Vanessa asks Flesh why he did that and if he wanted to die. The man tells her that he had killed his own daughter and ripped out his young son’s heart in front of his wife then left her unturned amidst the remnant of their children. Earlier we learned that he had been bitten by Julius (one of Dmitri’s goons) soon after the volcanic explosion. Flesh likely feels utter hatred with himself for the things he did as a vampire, but explains to Vanessa that all the human emotions are numbed when you are one of them. He further says that he wants to die but in his own terms to somehow make up for what he did to his family.

Axel soon has the generator up and running again and after he goes to ask Vanessa if she could try and revert the Doc back to being human again. She is hesitant of course because she doesn’t understand what’s going on with her blood but we’ve already seen three vampires she’s brought back to their mortal selves. Eventually she agrees and goes into the cage and offers her wrist to the vampire. In a surprising turn of events, the Doc refuses to bite her and I wonder if its some predatory sense of self-preservation that knows that she will be changed if she takes Vanessa’s blood. The vampire pushes the other woman against the wall and in an animalistic moment, Vanessa bites the Doc’s neck herself. Amazingly, the physician survives and becomes her old self again to the relief of everyone, especially Axel and Vanessa. Earlier, one of the survivors accuses Vanessa of being one of them and this moment does make you question what she really is.

At this point we know that Van Helsing heals just as fast as the vampires do and her blood has the ability to change any individual back to their human selves. Vampirism seems like a disease of sort that has mutates their hosts differently. Some have no longer any eyes and have become more bestial looking with no humanity left in them while others like Dmitri and Rebecca appear to look fully human still albeit their very pale skin tone and fully maintain their cognitive abilities. Vanessa biting a vampire is enough to revert them as well making it possible that whatever catalyst is in her blood may also be in her saliva. 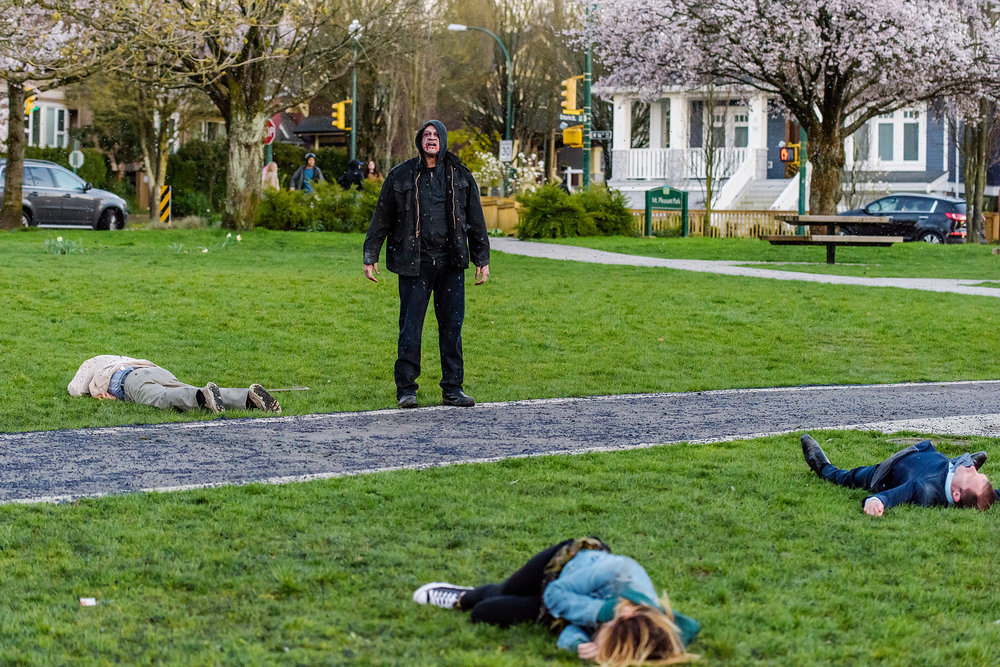 This episode also showed us the moment before the Rising from the perspective of vampire Julius who is now able to walk outside in daylight because of the ash clouds that blocked the sun’s direct rays. He is inside a room that resembles a crack den and has humans who seem totally drugged out while he uses a syringe like a straw to suck blood from them. Once the ash begins to fall from the sky, he realizes that he can go outside and no longer has to hide. Sensing that the time was now, he begins to feed openly and vampires begin to multiply (and he sires Flesh). We see Julius later when the vampire group (who attacked the hospital) report to him that Flesh has become human again. He tells them to send word to Dmitri about this.

It’s Flesh’s storyline that was the most intriguing this week having been at the wrong place at the wrong time when he was first turned and then to kill his own children in front of his wife. We don’t know if Mrs. Flesh survived but now that he’s human again he has to wrestle with the emotional consequences of his actions. Naturally the folks inside the hospital don’t trust him because we don’t really know if the reversion is permanent or will he turn vampire again at some point?

I also really enjoyed seeing the growing relationship between Vanessa and Axel. It seems like he’s winning her over as a person she can trust, since he has been guarding her for the last three years. For the moment at least she realizes that she’s got a better chance of surviving and finding her daughter if she sticks with him. Though, I’m not really rooting for them to become a thing, I kind of prefer Axel and the Doc.

Overall Van Helsing continues to be intriguing as we learn more about the Rising, Vanessa’s mysterious abilities, and the backgrounds of the other survivors. I also hope we find out what happened to the rest of the country, whether the government has fallen, and if the vampires have taken over everything. If so, all hail President Dmitri?

@theworkprint
Follow
Previous article
‘Pitch’ and the potential for platonic relationships on TV
Next article
The First Teaser Trailer for ‘Pirates of the Caribbean: Dead Men Tell No Tales’ Has Arrived