‘Game of Thrones’ – “Book of the Stranger”: It’s Getting Hot In Here

This week on Game of Thrones: JON AND SANSA HAVE A STARK REUNION THIS IS NOT A DRILL.

Spoilers through season 6, episode 4: “Book of the Stranger.” I’m not kidding. This is Game of Thrones. You know people die like every ten minutes, right?

In recent years, my biggest gripe with Game of Thrones has been the darkness, the negativity surrounding every facet of the realm to the point where I wondered why I should even continue watching the show. While there are still many bad things happening in Westeros and Essos, the fourth episode of season six, “Book of the Stranger” finally gave viewers some sense of happiness, something we can look to say, “That’s what I want to cheer for.” Bit by bit the heroes are beginning to pick themselves up from the ashes. I don’t doubt that by season’s end we’ll be looking back fondly at recent events, but at least we had them, right? Right?

Tyrion has a job in Meereen now that requires him to do more than drink and know things and praise R’hllor for the development. His plot this season hasn’t been the worst but it hasn’t exactly been edge of your seat exciting, either. Remember the days when we would pray that a small council meeting would last the entire episode just so that we could watch Tyrion take jabs at Tywin, Cersei, Joffrey, or even poor, dumb Pycelle? We got a taste of that excitement watching him deal with the slave masters as Missandei and Grey Worm looked on warily. Missandei and Grey Worm know the slave masters intimately, much better than Tyrion ever would in his few weeks of servitude, but he tries to use their self-serving attitude against them to get what he wants. Ever the smug debater, Tyrion thinks he’s won with the masters while saving face in front of Meereen’s slaves. Grey Worm knows better and warns that Tyrion has done nothing yet but anger them. If I had to guess, the slave masters won’t honor his agreement because 7 years of slavery isn’t long enough in their eyes.

I hate when I’m right about Game of Thrones. Last week I predicted that Osha would try to same trick on Ramsay that she pulled on Theon and oh, look. She did. And oh, look. She got stabbed in the throat. Yet another character we all had high hopes for out the moon door. (RIP Ros, I still miss you.)

BE STILL, MY HEART. LOOK AT THESE BABIES HUG.

That tilt of her head into his face is going to rock me to sleep tonight.

After last week’s preview I was CERTAIN Jon would leave Castle Black before Sansa arrived because that’s just how these things go on Game of Thrones, but lo! Look at the two of them. LOOK. Honest to goodness I’ve never been so happy watching this bloody TV show. These are two characters who have suffered the most of any of them. They are good and do what they think is right and time and time again they’ve put that fallible Stark trust in the wrong people and it’s left them broken. But now, they’re together again and they finally, FINALLY have another person in their life they can trust heart and soul. While I know Sansa is hell bent on taking back Winterfell (as she damn well should be), I just want to bask in the beauty of their reunion for a few moments longer.

After the few happy moments between the two, they’re slammed back to reality when Jon receives a letter from Winterfell. 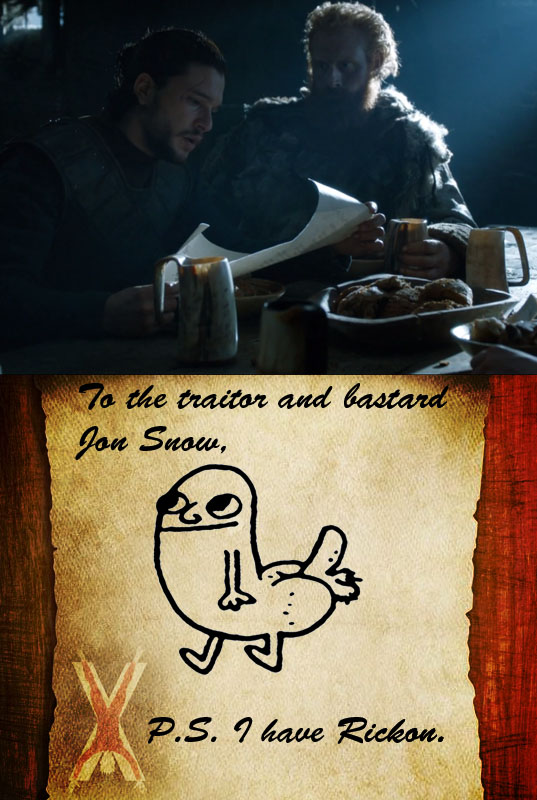 The threat against Rickon, Sansa, and all of the wildlings sends the dinner table into an uproar, with everyone itching to kick this bastard of Bolton’s ass. Even though Game of Thrones has taught me that such a move will undoubtedly end in heartache, I couldn’t help but cheer in the moment.

Meanwhile, Brienne of Tarth introduced herself to everyone at Castle Black, making her presence known to Red Woman and Ser Davos. Davos found out the hard truth about Melisandre and her relationship with the now extinct Baratheons. It’s odd that he waited until now to ask about Stannis and Shireen and my heart broke a little upon realizing that he still doesn’t know how Shireen died, but maybe that’s for the best. Brienne, however, had no qualms with telling Davos to his face that she executed Stannis and then sashayed away with her hand on Oathkeeper’s hilt, daring either of them to say one damn word about her actions.

Also: Brienne + Tormund = The Bear and the Maiden Fair <3

This week was all about reuniting siblings (and about the sisters telling the brothers to man the eff up), so it makes sense that Margaery gets to see Loras after weeks of torture. Where Ramsay is malicious and everyone knows where he stands, the Sparrow is downright devious. He’s ten steps ahead of everyone else and knows just how to manipulate them. He meets with Margaery to ask what she would do if she were freed and she answers how most would answer: I want to see my brother, my husband, my family. The Sparrow nods and tells her a story about how he, too, once loved the climb, loved the finer things in life, but after hitting bottom, he realized that his time was better spent on the poor than on the wealthy. Margaery is unmoved by his story and instead of pressing the issue further, the Sparrow gives her the thing she wants most: Loras. Margaery claims that the Faith is trying to break him and he needs to be strong but in fact it’s the opposite; they let the two met in order to break her. Margaery and Loras have as close a bond as any brother and sister and here is this man she loves more than any other and he’s begging her to put him out of his misery. Instead of agreeing with her to fight, he’s given up, and now she knows she’s alone against the Sparrow. She knows that Loras is not secretly plotting his escape; he’s ready to sing for the Sparrow and that means taking Margaery down with him. The Lannisters, the Tyrells, and the Kingsguard can’t save them now, even if Cersei manages to ally all three of them again. Of all the villains in Game of Thrones right now, the Sparrow is by far the most frightening.

Oh, there’s Littlefinger. Last we saw him he was dropping off Sansa in Winterfell like she was a bag of friggin’ groceries. Now this dude is going to act like he’s completely okay with what Sansa has gone through and now he’s enraged and wants Robin Arryn to save her from the Boltons? Look, I’m all for bringing the houses together and getting that monster out of Winterfell, but if he’s going to try to play like he was mugged and the Boltons stole Sansa AND his lunch money, why wait until now? Because he knows he’s not alone? Young Robin might not pick up on Littlefinger’s lies, but the other lords of the Vale will. Granted, Robin could so easily throw them all out the moon door and I supposed that’s what the scene proved, that it doesn’t matter the lies you tell but rather which fools believe them and how much power their wield.

Jorah and Daario continue their valiant rescue attempt through the desert on their way to the Dothraki city of Vaes Dothrak. Poor Jorah still tries to adhere to the Dothraki rules even though they’re planning on stealing a khal’s widow and Daario is all, “Nah, eff that. I love this knife. MWAH bebe.” The pair get into a bit of a scuffle and I don’t know if it’s Jorah’s newly exposed Greyscale, his age, or the obvious heat stroke, but did not handle himself well in the fight. 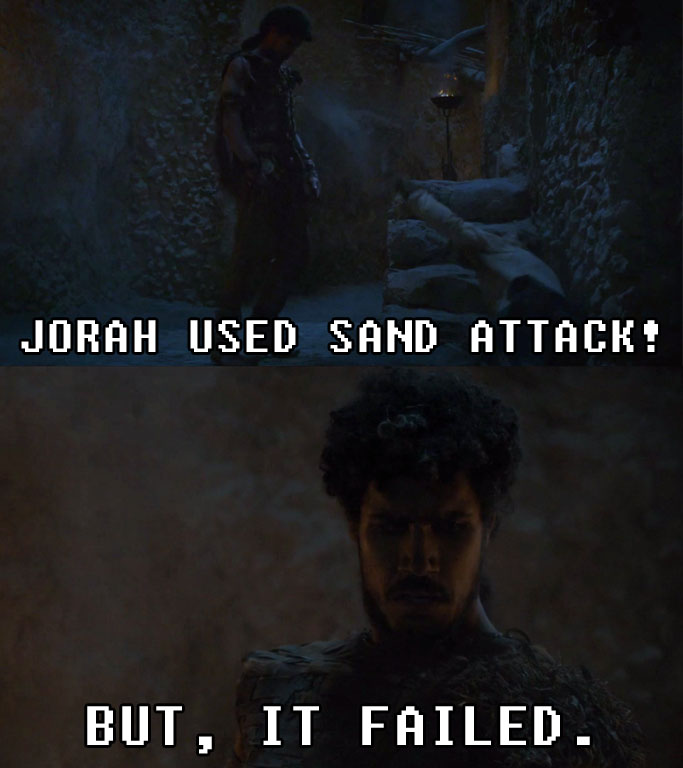 Once the pair meets up with Dany, she spurns her rescuers and says that they can’t outrun the Dothraki, but she has a better idea. Dany’s “better idea” involves making friends with the other Dosh Khaleen and then standing up to the khal as they pass judgment on her future. The Mother of Dragons has had some awe-inspiring scenes, the emergence from the funeral pyre, the turn on the slavers, but standing in front of the khals, knowing full well that she had all the power, that she didn’t need Jorah, Daario, or dragons, damn that was awesome. 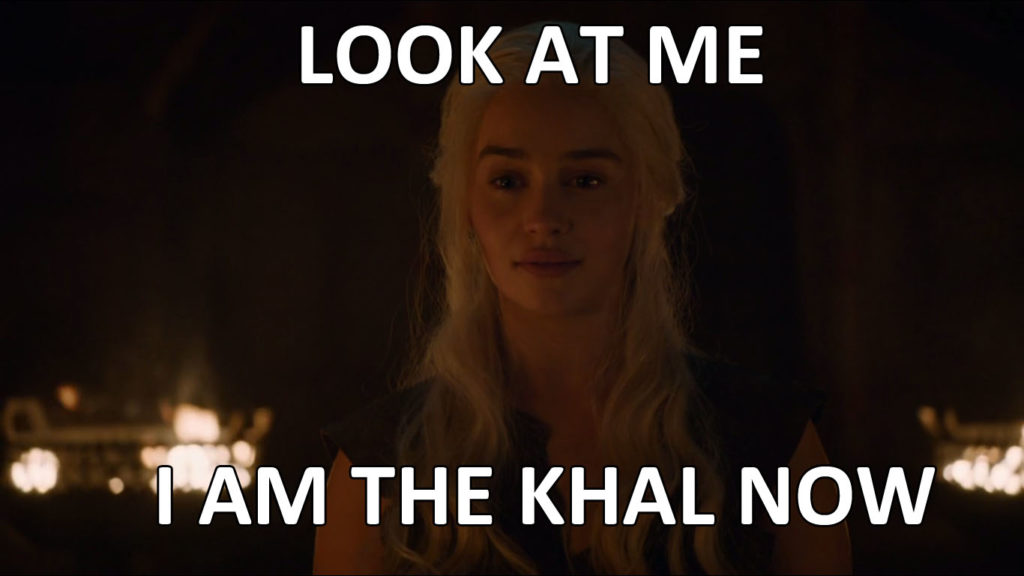 To some, this callback to Dany’s final scene in season one might seem like a waste. Dany’s arc causes the most division among fans, citing it as boring and pointless. While I agree the Meereenese Knot can get a bit tiresome, I think this cyclical nature of Dany’s rule is important for her as a character. When she started in season 2, you couldn’t get through an episode without her proclaiming, “I will take what is mine with fire and blood.” Now, Dany knows that she is meant to rule; she knows that with leadership comes a cost; she knows what she wants and how to take it. She doesn’t have to yell to get it. She just acts. But most importantly: she knows she can, and will, fail.

And it looks as though she is fulfilling Quaithe’s prophecy:

“To go north, you must go south. To reach the west, you must go east. To go forward you must go back, and to touch the light you must pass beneath the shadow.”

Theon returns home to the Iron Islands only to find out his father has been killed and Yara is pissed at him. I suspect her anger was an attempt to bring the old Theon out from behind Reek’s shadow and not just because she was super angry he got good men killed. Not much else happened on Pyke except that Theon vowed to help his sister at the Kingsmoot.

I have to say I love the strength of the women in this episode. Sansa, Yara, Margaery, Dany, and even Cersei all stood up to the men they trust and made some tough decisions.

This Lannister-Tyrell deal to save Margaery has me fearing for Tommen’s life. I imagine that the Sparrow will finally pull that bastard straw out of his hat and the people are going to turn against the King, causing more chaos than any of them can imagine. 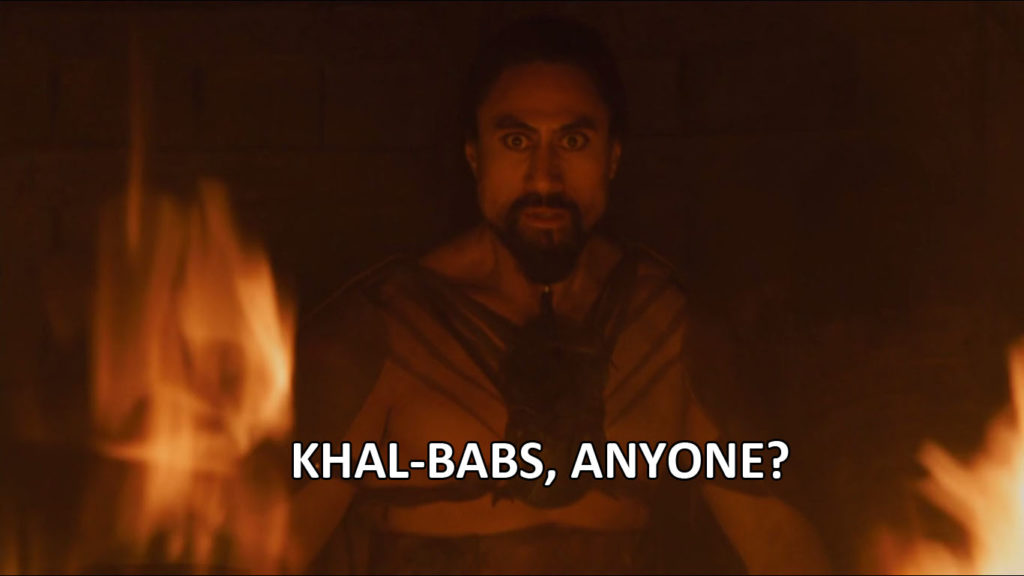