‘Game of Thrones’ – “Oathbreaker”: What’s in the Tower?

Game of Thrones 6×03, “Oathbreaker”: Spoilers for everyone. Even you, you needy book readers.

I’ve said it before and I’ll say it again, Game of Thrones is INSANE right now. There’s something so inherently maddening as a book reader to not know what’s coming next. We were so smug in the early years with our “tee hee Red Wedding” references, we theorized what may happen and donned the tinfoil, but after Jon’s resurrection last episode and the confirmation of a few theories in “Oathbreaker”, season six has certainly kept me on the edge of my seat. And I’m sure that’s exactly what HBO wants.

Into the abyss, yes?

Dany is the newest guest on Real Housewives of Vaes Dothrak and the High Priestess is excited to have her at the mansion because girlfriend eats a mean horse heart and all those other girls are picky as hell. The High Priestess would begin Dany’s initiation into Housewife Order, except…Dany isn’t dressed for the role and her application is like 4 years late. Dany tries to go all hipster on the widows and says she doesn’t really want to be there but if it’s hang out with girls inside or get abused by the dudes outside, well, Dany would rather the former until she can escape her newest prison. 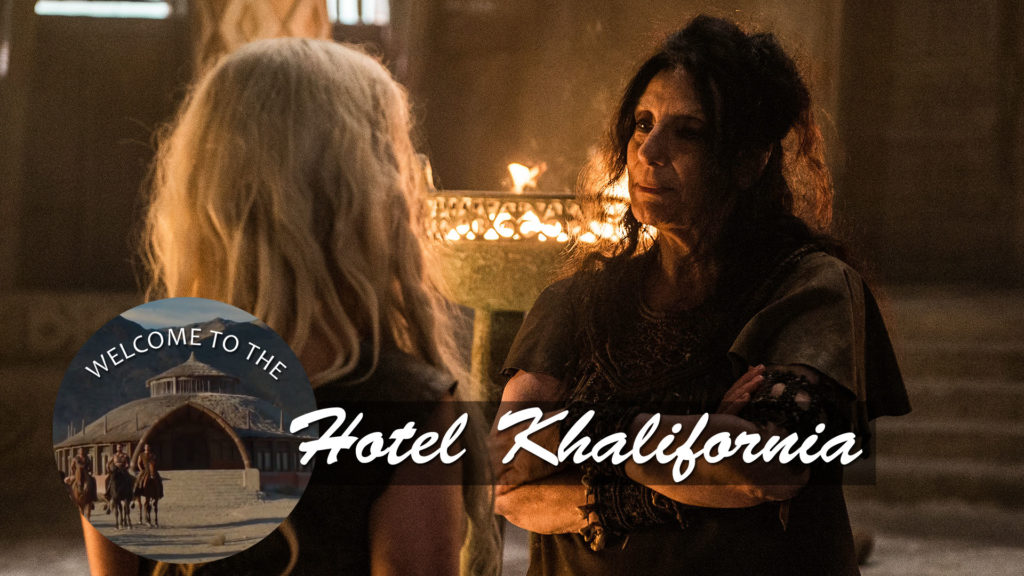 I’m kind of “meh” on the whole Dany plot right now and my only interest, really, is in seeing Emilia Clarke. Because I’m shallow. But I have hopes that Dany will rescue herself and get the heck out of dodge soon. Right…? (Preview for next week says, “Er…no.”)

After that preview last week, EVERY book reader creamed their pants at the prospect of seeing the Tower of Joy sequence play out on screen. And play out it did. Not only did we get to see Ser Arthur Dayne and his sword, Dawn, but we saw the (rightfully) acclaimed knight be a total badass taking down one Northern dude after another. Even though we know Ned survives the fight (to die another day), there was some hope that this kingsguard, so epically doing his duty, would come out victorious. Instead, he is stabbed in the back by the crannogman, Howland Reed, in a totally dishonorable fashion. Ned runs into the tower after, we assume, his sister Lyanna, leaving viewers screaming…

Three-Eyed “Cockblock” Raven pulls Bran from the vision just as we were about to learn the answer because Bran cried after Baby Ned and Ned heard him, leading us to wonder if Bran does have more abilities than originally thought. But come on, Brynden! Some of us have been waiting YEARS and YEARS to finally confirm what’s inside that tower. You have to feel like after that little stunt, Bran is going to rebel against his master and go back to that scene without permission.

Speaking of rebellious Starks, Arya is becoming quite the little blind assassin. Her story thus far in the season has been like vanilla pudding, good but not all that exciting. However, in “Oathbreaker” she got her Rocky-style training montage, even besting the Waif at one point. It’s a nice, easy scene that shows the passage of time while still not being over-the-top cheesy. J’aqen declares her truly “no one” and gives her back her eyesight. At one point during her sparring with the Waif, Arya is asked about the Hound and at no point does Arya say the Hound is dead, just that she left him dying. Keep that little nugget in your back pocket, kiddies.

Down in the dark underbelly of Qyburn’s laboratory, ex-maester Qyburn is turning Varys’ little birds into spies for Lannister use by bribing them with sweets, as if he wasn’t already the second creepiest man in King’s Landing. (Looking at you, Pycelle.) Then Qyburn casually mentions that the new member of the Kingsguard is Gregor Clegane and while no one is really surprised at that turn of events, it felt like that reveal was kind of tossed to the wind. It’s nice to have the confirmation though. With Cersei’s upcoming trial by combat, Jaime’s excitement at a battle with the Faith Militant, and Arya’s mention of the Hound, it can only mean one thing… 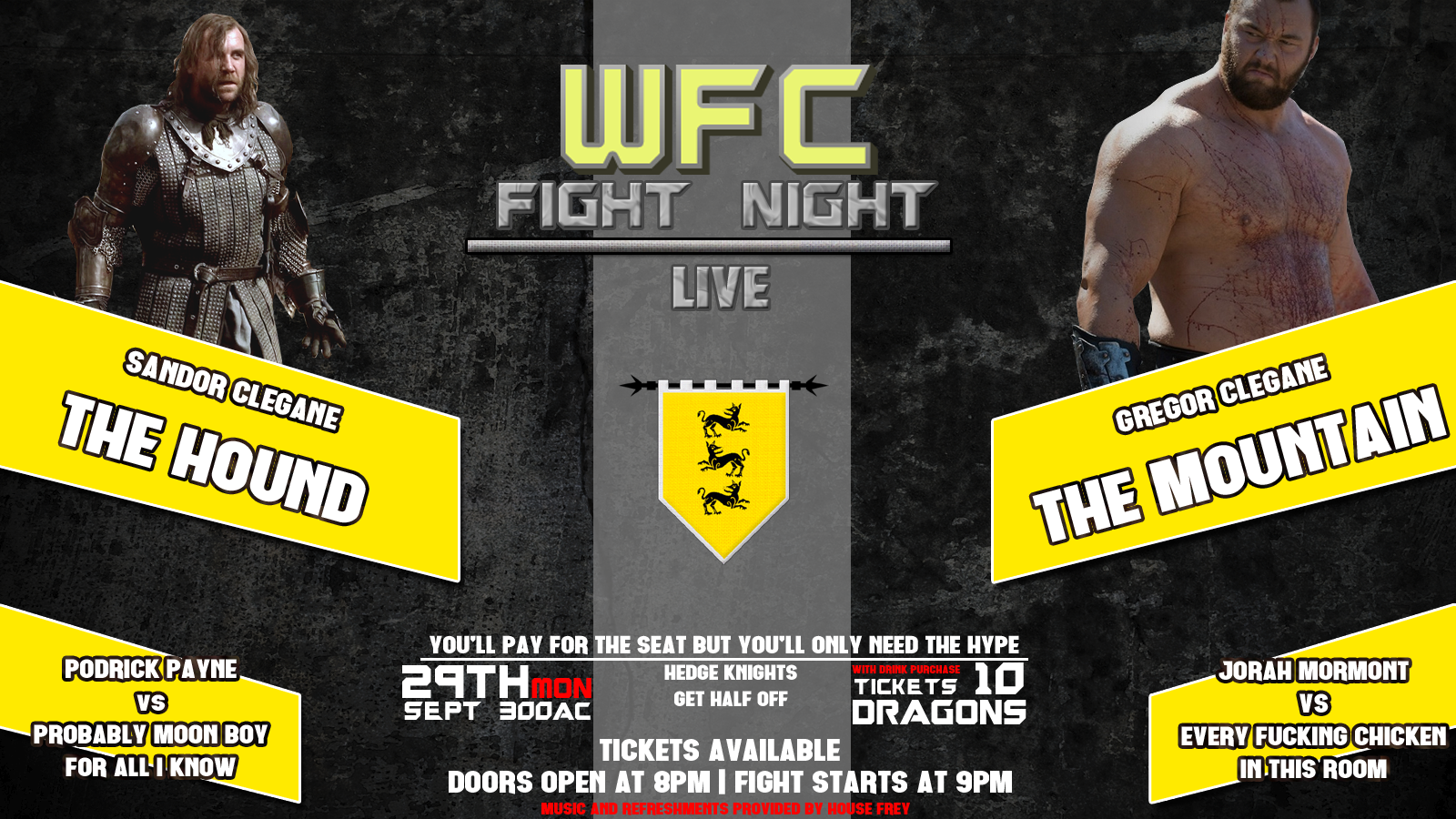 Okay, you non-book-readers have no idea what the heck I’m on about, but a quick rundown of the theory is that Sandor Clegane doesn’t die but is “reborn” as a member of the Faith and he becomes their warrior against Cersei’s sins, which means he’ll fight her “champion”, Gregor. It’s a long shot, but it doesn’t stop fans from getting hype.

In other news in King’s Landing, Cersei, Jaime, and UnGregor try to sit on the Small Council in an attempt to make Westeros Great Again but Uncle Kevan and Olenna Tyrell go all Mean Girls on the baby Lannisters and take their crayons to another table.

*Cersei will remember that.*

Meanwhile, Tommen, in a move that shocks absolutely no one, goes to the Sparrow with his chest puffed out and then immediately gets put back in his place like the kitten that he is. I can’t fault Tommen for believing the Sparrow’s words; the boy has no real knowledge of the outside world since Cersei put all of her effort into corrupting Joffrey as a child. 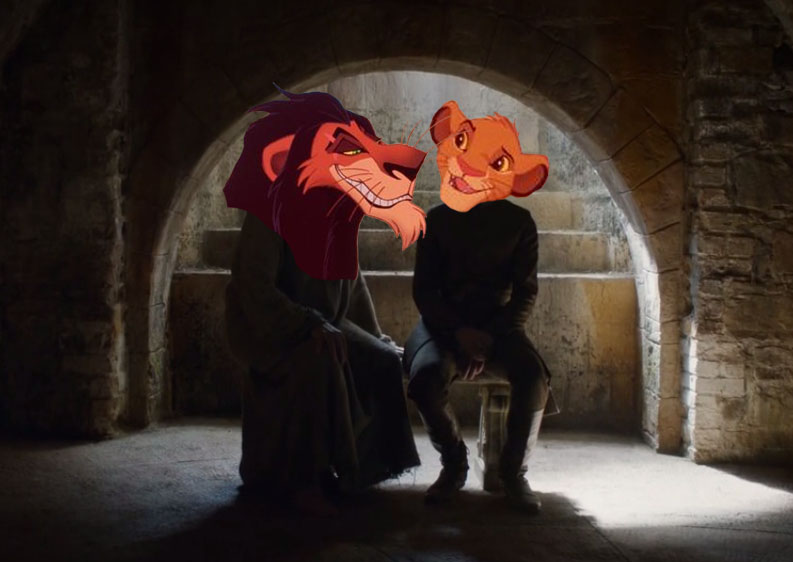 Jaime, however, has no excuse for getting kicked around by everyone and he needs to grow back his mane soon or he’s going to get shanked in the streets.

Varys is creating his own flock of birds in Essos, learning of re-revolutions in Yunkai, Astapor, and Volantis. All of the “Free Cities” want Dany and her progressive ways out of Essos so they decide the best way to do that is by killing everyone and burning all her shit to convince her to leave. While waiting for news from Varys, Tyrion uncomfortably tries to bond with Grey Wurm and Missandei and it goes about as well as a Bolton family dinner. It’s an awkward scene and as much as I love the group of them, I think we’d have been better served with just Varys questioning the woman who helped orchestrate the Unsullied murders.

The new Warden of the North, Ramsay Fockin’ Bolton, gets a visit from Smalljon Umber who wants to kind of sorta pledge his fealty-like feelings to the new Lord. It’s scenes like this that make me wonder if show-only watchers know any of these Northern lord names and their importance to the story at large. Smalljon Umber is the son of Greatjon Umber, the crazy fool who drew his sword against Robb Stark and then laughed about having his fingers chewed off.

When Rickon leaves Bran back in season 3, Osha says she means to take Rickon to the Umbers as they’re considered one of the houses loyal to the Starks. Or so we thought since when Smalljon Umber arrives, he brings Rickon Stark and Osha as “gifts” for Ramsay. And we all know what Ramsay does to his “gifts.”

Kind of the same thing the Umbers did to poor Shaggydog.

Yet another week where we end at Castle Black. I can’t say I’m sad about the focus on Jon Snow’s resurrection as I only really started to enjoy Jon Snuh when he was the Lord Commander. Jon Snow is born again into the world the same as when he was a baby, naked, afraid, and with the curls of an angel. He and Davos share a father/son moment, Melisandre takes a moment to appreciate her handy work, and Tormund makes the best penis jokes in the history of the show. HAR. It’s fitting that after his death Jon Snow gets burned alive by a wildling. It is tradition, afterall.

Jon Snow may look the same, but he’s a changed man. Like Ned and Robb, he tried to do the right thing and died for it, except unlike the other Starks, he was given a second chance. For someone as pessimistic as Jon, it has to make him question why he would be brought back into the world when at a glance, Ned or Robb could have made a bigger difference. The only thing he is certain of after his revival is getting justice for his murder, so he hangs Alliser Thorne, Olly, and the other mutinous crows. It’s not an easy decision for Snow, but it’s one that forces him to realize that much like Arya, Bran, and Dany, he can’t forget where he came from, and he can’t hold a title where he’s meant to be impartial, so he gives up his role as Lord Commander of the Night’s Watch to Dolorous Edd. 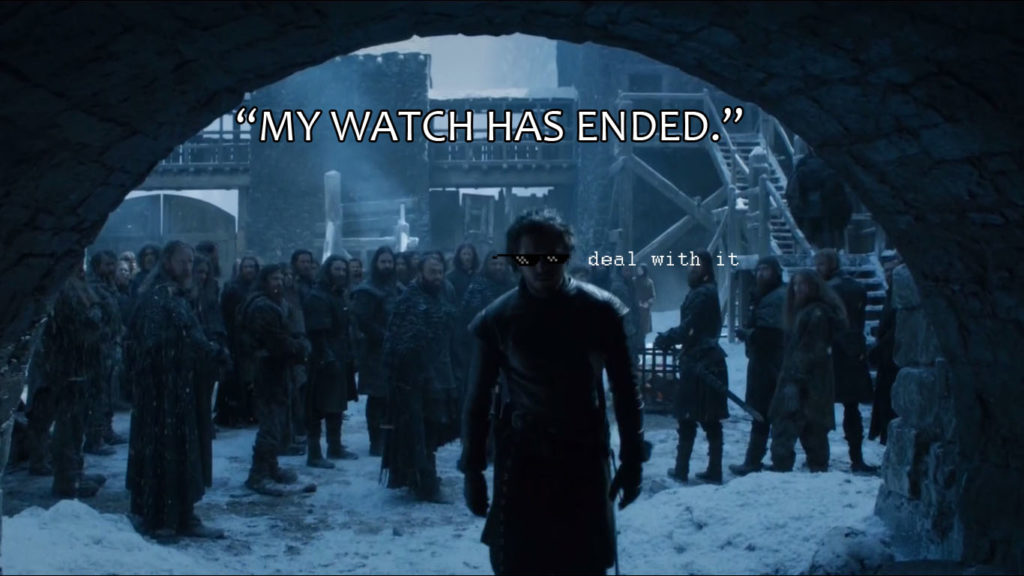 I didn’t mention Sam and Gilly’s journey to Oldtown because it’s mostly a non-issue at this point. Sam got sick in a bucket and Gilly wants to follow to him to the ends of the earth. Blah blah blah.

I don’t think Lord Umber is really handing over Rickon. There’s no way that wolf head he slammed on the table is Shaggydog. I mean, do you remember how large Grey Wind’s head was on Robb? (RIP)

I think Smalljon Umber is pulling the same shenanigans on Ramsay that Roose pulled on the Starks. He’s weaseling his way into Ramsay’s good graces with his honest tongue and a Stark child and then once Ramsay gets Osha into bed, SHINK. Granted, I think Osha will fail and Ramsay will flay her because that’s just how this fucking show goes lately, but it’s something. I know that having hope in Winterfell makes me stupid but I’m tired of seeing Starks pushed around.

Judging by next episodes previews, Sansa and Brienne make it to Castle Black, but I’m worried Jon won’t be there once they arrive. Granted, he’s not about to walk into the frigid North without a coat, is he? What would his father think of such reckless behavior? (Come on Stark reunion!)

Arya totally isn’t “no one”, she’s just learning to be a better liar. Thanks, Faceless Man training!

Oh, shit. Was that Littlefinger in next week’s trailer? Did he realize he… *gasp* made a mistake trusting Ramsay?!

Okay, but seriously, we NEED to see what’s in that tower.