Who Is The New Member of the Kingsguard in ‘Game of Thrones’?

**Spoilers through season five, episode ten of Game of Thrones**

There are many things to discuss from season five’s Game of Thrones finale. So many things, in fact, they probably all deserve their own post. Last night, amongst all the death and despair and dragons, we saw a new face. Well, kind of.

After Cersei’s walk of shame, Qyburn welcomes her to the Red Keep and is the only one to show any sympathy toward her situation. He then introduces her to the newest member of the Kingsguard, a large brute of a man who has taken a vow of silence. This unfamiliar knight picks up Cersei like she’s a toy poodle and carries her out of the room with a grunt.

But who is the new member of the Kingsguard?

We’ve already seen his face a few times throughout the series and I’m sure by his size many have already guessed his identity. In the books this knight is known as is Ser Robert Strong, but it’s a widely accepted theory that you know him as someone else. Remember this dude? 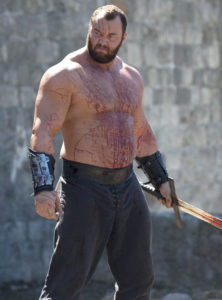 RELATED: Does Dead Mean Dead on Game of Thrones?

He’s Gregor Clegane, also known as “The Mountain,” and brother to our favorite Arya Stark travel companion, The Hound (who also may or may not be dead–common in Westeros these days). Last we saw Gregor, he was doing terrible things to the most charismatic character on the show–Oberyn Martell–in the trial by combat that sealed Tyrion’s guilt in King Joffrey’s death. Yet, at the end of that fight, Gregor looked like this: 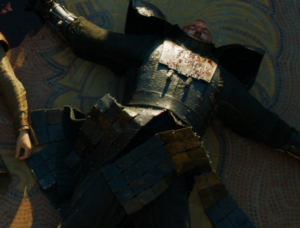 If you haven’t guessed from this article thus far, Gregor wasn’t killed. Well, not completely. If there’s one thing we’ve learned about the Martells this season (besides that Oberyn was Obara’s father), it’s that they are adept with poisons. Bronn is poisoned in the ridiculous fight at the Water Gardens. Myrcella is also poisoned after being kissed by Ellaria. Oberyn, like his daughters, embraced a love of poison and even though he lost the fight, he did serious damage to Gregor, leaving the behemoth in Dr. Frankenstein Qyburn’s hands.

Throughout the fifth season of Game of Thrones, we’re treated to tidbits between Cersei and Qyburn, discussing the progress of the latter’s experiments. We know that Qyburn lost his status as a maester at some point because he dabbled in necromancy and other dark arts. (He was also rejected for the Defense Against the Dark Arts post.) Therefore, it stands to reason he isn’t afraid to create patient zero. Judging by the lack of speech and the purple around his eyes, Ser Robert Strong is likely to be a result of those experiments. Soon, Cersei will have a trial for her sins against the Faith and it wouldn’t surprise many for her to use her new friend in a trial by combat. I mean, he already has experience in winning such a fight.