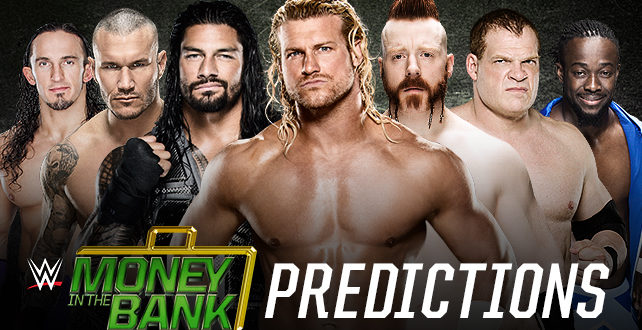 WWE Money in the Bank: Who Wins, Who Loses

WWE Money in the Bank comes to us on Sunday, June 14, 2015 from the Nationwide Arena in Columbus, Ohio.

There are six matches on this year’s card including a match during WWE’s Kick-Off Show.

Here, now, are our predictions for the winners and losers…

Danielle: Oh, god…I don’t even know why this match is happening. Barring some major character overall and improvement, Truth is the new JTG. Wade Barrett was much better when he was doling out “bad news”. Now, he’s a sad parody of himself who jobs to the likes of Truth when WWE is out of guys to feed him to. That said, I think they’ve humiliated him enough and he already was pinned by Truth at Elimination Chamber. I think Barrett finally adds one to the win column. WINNER: Wade Barrett

Matt: I have to agree here. Barrett’s been kicked around and beaten for a while now…and while I wouldn’t put it above WWE to job him to Truth “just cuz”, I don’t see that happening — though, this being a Kick-Off Show match is worrying since nobody cares. WINNER: Wade Barrett

Jared: Yup. This match is absolutely pointless as hell. Barrett should win in a squash. Why do we still have Kick-Off Show matches again? If it’s to rope people in, they’re not gonna be won over by the two biggest jokes of WWE. WINNER: Wade Barrett

Danielle: They can’t leave well enough alone, can they? I’d like to be optimistic and say that Kevin Owens beats Cena again but I just can’t. WINNER: #CENAWINSLOL

Matt: Boy…I’m torn. On the one hand, Cena’s got an ego the size of Owens (see what I did there?) but Owens has so much heat and momentum that they wouldn’t DARE job him to Cena…would they? This match cannot, and I stress, CANNOT end in a DQ or countout. That’s a cop-out and would defeat the entire purpose of this. I am going to go out on a limb and say that Owens defeats Cena again. Anything less would really be a bad idea. WINNER: Kevin Owens

Jared: I’m gonna agree with Danielle. Cena’s got to “prove he’s a real man”. I think he wins here to set up a match for the United States Title at Battleground. WINNER: John Cena

Danielle: Roman Reigns wins this all day and all night. I mean, look at this match. It’s mid-card Hell vs. Roman Reigns and Kane For Some Reason. I think Reigns pulls out the victory — but not before some chicanery involving the Authority. WINNER: Roman Reigns

Matt: This has to be one of the worst MITB Ladder Match set-ups I’ve ever seen. Ok, first, let’s cut the shit: Neville and Kofi are only here to fill space and so they can do high spots where they flip around and go nuts so that this thing doesn’t turn out to be a total dud. Ziggler isn’t going anywhere near the title again and neither is Randy Orton. Sheamus and Kane aren’t serious contenders and that’s why it’s easy to see that Reigns will finally get the first big push toward the title — and I still don’t know why. WINNER: Roman Reigns

Jared: I’m gonna go off-the-reservation insane here and say that Kane, with the help of The Authority in some manner, wins the MITB Ladder Match. This scenario makes the most sense to me as Kane will finally put the nail in Rollins’ proverbial coffin. WINNER: Kane

Danielle: Total Divas starts in July — right when business will finally “pick up” for the Divas Division. I have a feeling Paige grabs the title here so that Nikki and John have some sort of “falling out” again. I have no idea. WINNER: Paige

Jared: I don’t care. I just don’t care. At this point, the Divas division is a total loss and WWE doesn’t care to fix it. I will, however, say that Nikki wins this. WINNER: #NIKKIWINSLOL

Danielle: Ok, 1) I don’t care and 2) Big Show’s a giant joke. I’d like somebody to explain to me why Big Show’s even in the title picture, let alone in WWE. WINNER: Ryback

Matt: I can’t explain why Big Show is here either. This is one of the most boring “feuds” I’ve ever seen. I wasn’t a fan of The Miz initially being the one that Ryback feuded with, but at least it kinda makes sense in that The Miz is a chickenshit heel who STILL loves to pick fights with even the biggest guys. I cannot see a reason why Big Show would even win this. WINNER: Ryback

Jared: Ryback wins this and wins this handily. It makes no sense to match these two and it would make even less sense for Big Show to go over. Ryback has all the momentum, so he’s not about to drop the title to a guy who has made more face changes than the T-1000 in Terminator 2.

Danielle: This one’s easy. I have a feeling that The New Day has overstayed their welcome. I don’t think they’re as popular and loved as WWE thinks they are. I think the titles go to O’Neil and Young. WINNERS: The Prime Time Players

Matt: Disagree. Titus is clunky and stiff and Young is awful and needs more work before becoming somebody believable enough to challenge for any gold. I mean, hell, Los Matadores could have been in this match and it’d be the same thing. As much as I really don’t get why everyone adores The New Day (they’re “mediocrity-as-the-norm” at its finest), I think they win. WINNERS: The New Day

Jared: And that’s why I’m saying that PTP wins the titles here. I think it’s good for their pairing. They don’t have a lot of momentum but I think it’s time for The New Day to lose the things. WINNERS: The Prime Time Players

Danielle: I want it to be Ambrose. I know it’s going to be Seth. I think this is a delayed pay-off from RAW where Rollins went “rogue”. Seth Rollins wins and feuds with Roman Reigns…and that’s unfortunate. WINNER: Seth Rollins

Matt: It makes me sad that the picture shows Rollins with the title and that Rollins is being called “champion”. I’ve enjoyed Ambrose’s run with the title and I think he’s a fun champion. The pop when he grabbed the title was off-the-charts. That said, unless WWE is looking for a radical change, I think Seth retains because WWE are cowards afraid to try something new — and that’s a shame. A total shame. Rollins wins after the Authority helps him. WINNER: Seth Rollins

Jared: Rollins isn’t gonna lose the title until he jobs to Brock Lesnar at SummerSlam. This whole thing is so predictable. Rollins retains but I don’t think he will do it unless The Authority helps him out. WINNER: Seth Rollins

So, there’s our thoughts.

Tune in today at 5PM PST / 8PM EST to see who was right and who was wrong!

Matt Perri is one of those literary Ronin you’ve never heard of until he shows up and tells you he’s a literary Ronin. He’s a native Californian, a film buff, old school gamer geek, and a sports/entertainment fan. A lifelong Giants, 49ers and Sharks fan, he also covers the world of pro-wrestling, writing recaps for WWE Monday Night RAW and Total Divas at Scott’s Blog of Doom. You can follow the guy on Twitter via @PerriTheSmark as well as here at The Workprint and his own blog, Matt's Entertainment.
@PerriTheSmark
Previous ‘Pretty Little Liars’ Recap: “Songs of Innocence” – Home Sweet Home
Next Who Is The New Member of the Kingsguard in ‘Game of Thrones’? 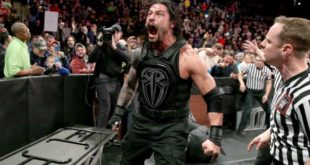 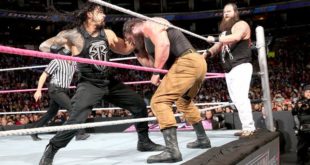 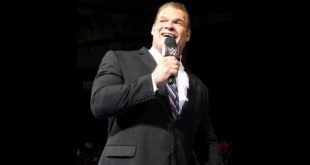