Pretty Little Liars‘ second episode of the Summer of Answers focuses on how the Liars are trying to deal with an unfathomable amount of trauma they have just endured.

The episode begins with the girls surrounding Spencer in her hospital bed, discussing the merits behind the theory of Andrew being Charles/A. This is one of only three scenes(four if you count Ali) where any of the Liars have an on screen interaction with each other. Toby and his new partner Lorenzo find and arrest Andrew, and upon searching his room discover Andrew kept a manifesto of how the Liars are representative of all things evil and the feminization of society.

For the first time in god knows how long, all of girls’ mothers were on screen, and actively involved in their daughters’ lives. The most interesting part of this episode was to see how the Liars were dealing with their trauma, and how their moms try to comfort and interact with them.

Out of all of the Liars, Hanna is having the hardest time being back in her room. Remember, the prison that A locked them in was a replica of their rooms at home. The wallpaper, the bedding, the furniture. They were all the same. Charles has stolen any comfort that the girls could grasp from being back in their childhood room. Everywhere she looks in her room, she is reminded of being kidnapped and tortured. Caleb is by her side, and asks Hanna if she is okay. And this is something that was asked throughout the episode to all the girls. NO! THEY ARE NOT OKAY! THEY WERE KIDNAPPED AND TORTURED FOR OVER THREE WEEKS!

Hanna takes charge of the situation, and decides to completely redecorate her room. She somehow gets her hands on a steamer, and her and Caleb rip down the wallpaper and toss out all of her furniture. Ashley is extremely concerned about her daughter’s well-being when she sees Hanna hauling her mattress down the stairs stating all of her furniture is ruined. Ashley tries to reason with Hanna, looking at Caleb for support, and Hanna isn’t having it:

Hanna: Don’t look at him. Look at me!

Ashley: How is it ruined?

Hanna: I just wanted to make a change and get rid of old furniture.

(Caleb and Ashley glance at each other)

Hanna: I said don’t look at him! Why do you keep looking back and forth. Why can’t I just have something I want? Does that make me crazy?

Later, Ashley finds Hanna sitting alone, crossed legged in the middle of her newly barren room. Ashley takes a seat beside her daughter and Hanna reveals to her mother the ‘games’ they had to play while kidnapped (classics like: “Truth or Dare,” “Who do you love more, me or her?,” “Who deserves water today, you or somebody else.”)

In my opinion, Hanna was the stand out character this episode. All of her actions throughout the episode were so true to her character. I also felt that I was able to connect, or at least understand her coping methods more than I did with any of the Liars. 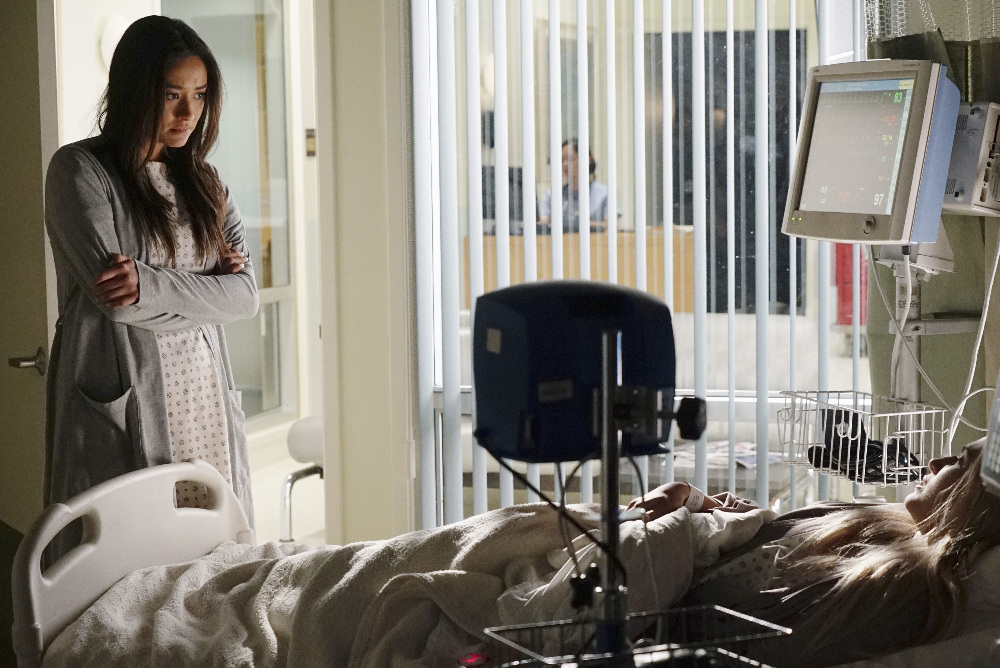 Aria’s mom, Ella, is helping her daughter sort out all of the drugs the hospital prescribed. Aria makes a sarcastic comment about how could she possibly need anxiety medicine and the mother-daughter duo bond over their need for sarcasm in time of conflict. Ella lets it slip that the police want to talk to the girls, but the Momma Liars came together and decided that their daughters will only talk when they are ready to which Aria eagerly blurts out “I’m ready!”

Before talking with the cops though, Aria needs to go clean her photography equipment at The Brew. Ezra joins her and explains to Aria how lucky she is. She has “an advantage over most people because he can write about it. Put it down on paper.” Wait, what? Ezra thinks that because Aria likes to write, she is more capable of dealing with her trauma? What the fuck? Aria pretty much tells him to fuck off with his pretentious sentiments saying that she just wants “ a nice big wall between before and after.” The scene then cuts to Emily at the shooting range.

Ella brings Aria to the precinct, where the authorities detail the case they have against Andrew (aka maybe, but most likely not, A). We learn that because of all the crazy amounts of money that has been put into torturing these four girls, the IRS IS NOW ON THE A CASE. Now questions about where A got the money to buy a silo, hire minions, shoot thousands of secret camera footage and purchase 500 masks will be answered. The IRS is on it, and the IRS will get to the bottom of it! Hearing this exciting news, Aria decides mid sentence to lie, change her story, and tell the cops that she saw Andrew’s face in the Kidnap Complex. Unfortunately, everyone who has any of the five senses could tell that Aria was letting out a big ole’ fib. In only the second scene of the episode to contain more than one Liar, Spencer pays a visit to Aria’s house. She is there to lend an ear while Aria rants about how stupid her false police report was. At least Aria understands how stupid she was. Ella later finds Aria taking photographs in the living room. She explains to her daughter that she understands why she lied, and that everyone wants Charles/A/Andrew to pay. She then delivers a line that could have come straight out of Dumbledore’s mouth:

Spencer: In the Hasting’s household, Spencer is the one sorting out her own drugs. Veronica starts lawyer babbling about how unfortunately Mona won’t go to jail but rest assured, all is still right in the world. Spencer can’t concentrate on her mom, because the one pill that has let her have an ounce of sleep in over a month is missing. Veronica goes “Nope, nothing’s missing. I explicitly told the docs that you don’t need those pills.” And then comes the scene that exemplifies that Hasting’s mother-daughter relationship:

Veronica: Spencer you know you’ve had some issues.

Spencer: Mom, they gave me something at the hospital and it was the first night in forever that I got what a normal person would call sleep.

Veronica: Honey, you’re home now. You’re not in the hospital.

Spencer: I can’t believe that you did this.

Veronica: It wasn’t an easy decision.

Veronica: I will help you any way I can, but I am not going to face the chance of you having another problem.

The fact that that Veronica can’t address things Spencer has experienced, by referring to them as simply “issues,” and “problem” says it all. They are a family where they keeps things inside, because if they came out, it would be too messy.

Toby takes Spencer out for a sleuthing/romantic/1920’s picnic he asks Spencer what actually happened in the Complex. For the second time this episode, as soon as one of the Liars tries to process what has happened, it cuts directly to Emily at the shooting range.  Spencer heads over to Aria’s house to hear Aria lament. Soon after, Ella calls for Aria to come downstairs, and Spencer is left alone with Aria’s sleeping pills, which she steals to help get some rest. 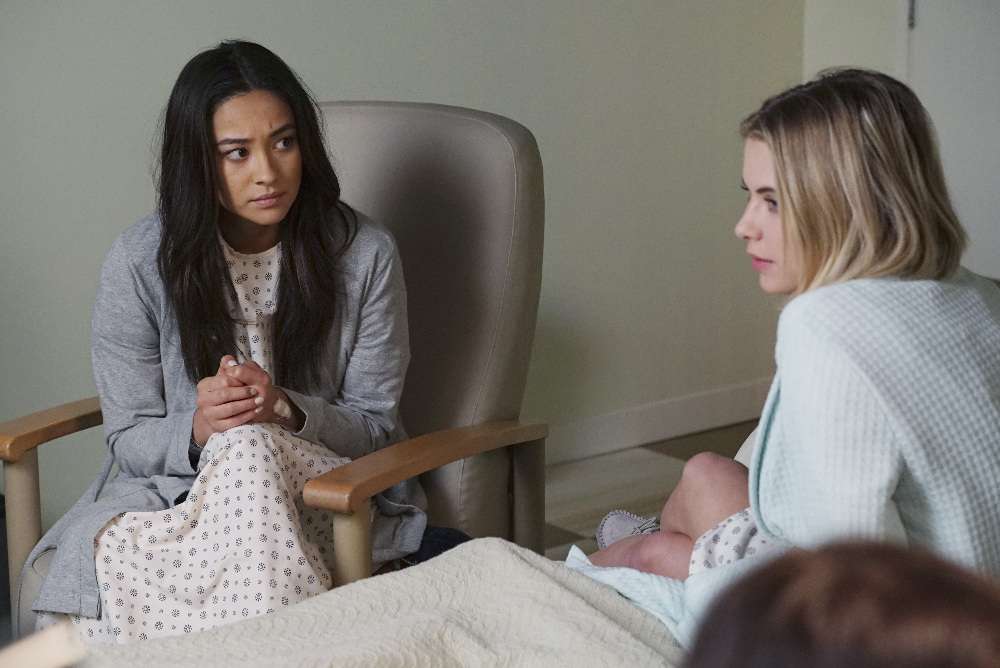 In the hospital Emily makes a visit to Sara who opens up to Emliy about how she was abducted. The truth behind A’s first real victim is revealed. A knocked her unconscious and kidnapped her.

When Emily returns to her house she is all business. She goes straight to the attic and cracks the lock to her father’s gun safe. Emily’s way of coping is to take control in protecting herself, which in this case is learning to use a gun. Pam Fields freaks when she finds out that Emily stole a gun and brought it to a shooting range. Pam asks Emily how she got the combination and the quintessential Fields mother-daughter dialogue unfolds:

Pam Fields: Never alone, Emily. That is not a rule in this house, that is the law. You knew that, and yet you sneaked up here?

Like all the parents this episode, Pam tries to get her daughter to open up to her, or at least Paige. Against all the viewers’ wishes (well, at least mine)  Emily told Paige that she is fine and she should stay away. I am still holding out hope that Paige will use her spidey senses and come back for Emily anyways.

Emily outfoxes her mother, and manages to rent a gun at the gun range. While pulling the trigger, Emily has flashbacks to the Kidnap Complex where she was forced to pick one of her friends to suffer, or all of them would suffer. Luckily, Pam gets there in time to bring Emily home and lightly interrogate her about her time kidnapped. Emily finally breaks down and tries to verbalize her emotions, and her attachment to Sara.

That evening Emily is strolling around in her father’s military jacket, and notices Sara lurking behind some bushes. Sara had found Emily’s address laying around in the Rosewood Hospital and decided to pay her a visit. Sara starts to open up about her past, and it is pretty dark.

Later, Emily calls Spencer to talk, and Hanna calls Aria to talk, and we end the episode how we started, with all the Liars together. They could not have picked a better song to for the last sequence of scene. Here are a few excerpts from the lyrics:

This was a really difficult episode for me to recap. The show has changed. As soon as these girls were kidnapped and tortured for a month, the show had to change. Yes, A has been torturing the Liars for the last 5 seasons, but what happened in that complex is on entirely different level. For years, viewers have been engrossed in A’s manipulating of the life of these four girls. The incredibly heinous acts (such as killing Emily’s girlfriend) were interspersed with the more playful pranks (putting worms in Chinese food). The absurdity of some of A’s stunts combined with the mystery aspect of the show allowed these horrible things that were happening to the girls to be somehow easier to digest.

I just am not able to view the show with that lens anymore. I think a large part of this is due to the involvement of the parent’s this episode. Their parents now know, and for some reason, that makes it more real. It makes it something that has to be dealt with. It is no longer light-hearted.

Previous article
‘Sharknado 3’ Adds a Crap Load of Cameos
Next article
WWE Money in the Bank: Who Wins, Who Loses