Now that the machine is running smoother she is spitting out real numbers of real irrelevants that need real help.

So I guess I got the wrong impression about John and Dr. Iris’s relationship last episode, because when he said they had been “on a few dates here and there” I thought that basically meant they were no longer together. I was wrong, because this week he is meeting her parents. But the restaurant he picked was a pirate themed restaurant, that would probably be located in Time Square, for dinner. The reason he picked this place was so he could help an irrelevant, so two birds one stone type of deal. John Reese, a romantic through and through.

The machine is up and working, so not only does it mean that they can now save the world again, but more importantly we get our new Root identity. And, just to make everyone swoon, her new alias is an adorable package delivery driver. Man, can this woman get any cuter. 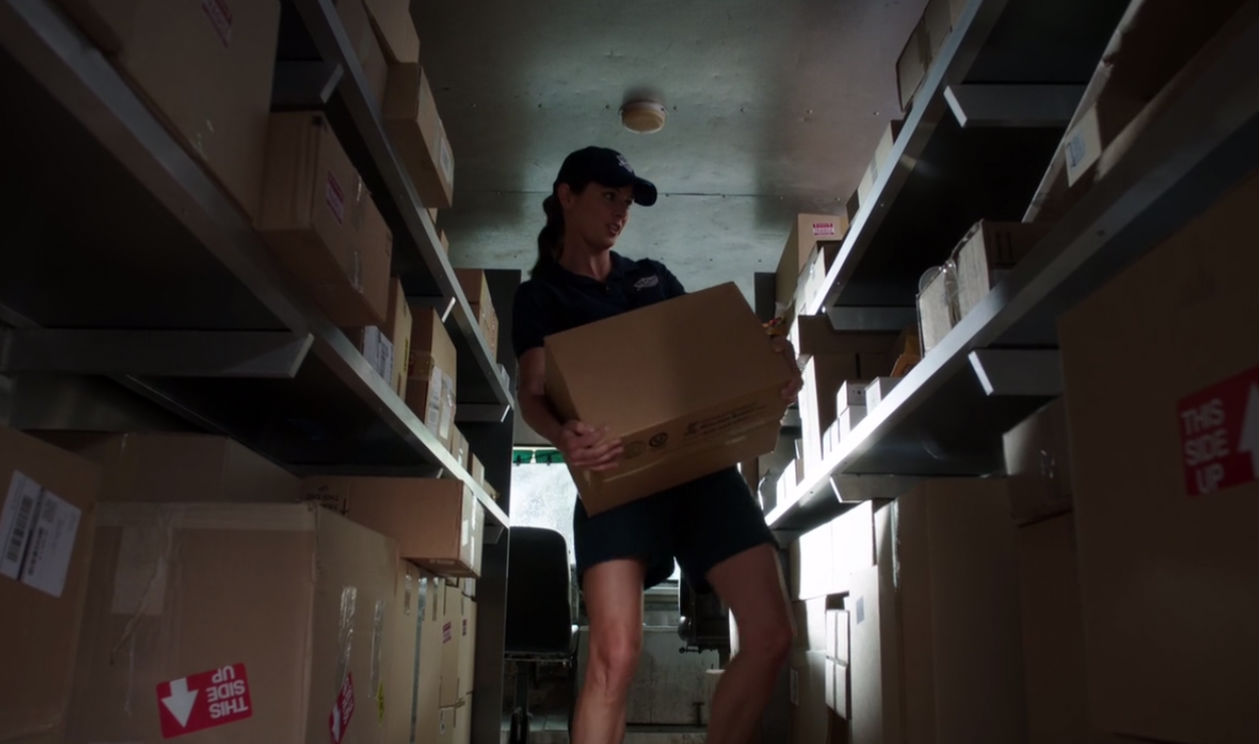 While on the job, she discovers that Samaritan has been installing malware on electronic shipments in order to infiltrate more systems quicker. In order to get a copy of the malware to study, she will need Harold’s help. But what is she to do with her delivery partner? Well hit him over the head with a heavy package of course, and blame him for not securing it. Dude, that is what you get for making unwanted advances on Root!

John’s number of the week line’s up with the Flashbacks of the week. The machine has given John the alias of a new employee at a consulting company. His number is a guy in the IT department, Alex. John’s first interaction with Alex may be the most awkward thing I have ever seen. After failing to bluejack Alex’s phone, Alex knocks over a coffee mug offering John a way to introduce himself… or hit on him? John was sputtering like someone who just worked up the courage to talk to a cute guy. It was as though John has never talked to another human being in his life. After helping Alex clean up the coffee he asks him for a beer. Alex gets all squirrely and declines, which means that Mr. Reese has to rely on his good ol’ spy skills to get any intel.

John spies on Alex after work and finds him breaking into a safe to snap pics of some top-secret confidential files. Files so top-secret, as it turns out, that they result in him being captured and kidnapped by the CIA . More precisely, John’s old boss from the CIA. The files in the safe were about Alex’s older brother Brent who had died while serving. He wanted to find out what had actually happened to Brent while overseas and was aghast to find out his older brother was a dirty Pentagon Official/Military Sergeant who stole weapons and sold them American enemies. Since the CIA does not know Alex was just searching for information about his older bro,they think he is a high-tech hacker looking to expose a CIA scandal. Oh, I forgot one of the most important parts, John killed Alex’s older brother for the CIA because he was a traitor. John decides that what Alex needs is closure on his brother’s death, not the truth so he tells Alex that his brother was not actually a traitor, but a stand up soldier fighting for his country.

This week’s mission/flashbacks made John realize that while he is fighting his war, he cannot have a normal life, he breaks up with Dr. Iris. Finally, good riddance. While I am sad that John can’t be happy, I am glad to be rid of her. Now it is time for Zoe Morgan to come back and date John.

Previous article
‘Person of Interest’: “SNAFU” Review
Next article
‘Game of Thrones’ – “Book of the Stranger”: It’s Getting Hot In Here