This week on Person of Interest: The Machine realizes that life is not all black and white. Harold tries to reconnect with his creation. John is lonely and bored. Root misses Shaw. And Fusco is Fusco.

“SNAFU” begins with the newly reborn Machine on the fritz, which ends up creating the best game of “who wore it best” ever created in the world.

The Machine is having trouble with its facial recognition, and keeps switching which of the core four it keeps seeing. While I see how this can be cause for concern, I have no problem seeing Amy Acker play every character. Root and Harold come to the conclusion that the gaggle of stolen Xbox’s powering the machine is not providing it with the sufficient juice it needs to properly run. So, yet again, Harold needs to reboot her.

Meanwhile, Harold and Root are getting used to being new roomies down in the subway. Since Root is forced to live underground like a vampire until the Machine can provide her with a new identity, it is Harold’s job to buy all of the supplies necessary to redecorate their new pad. And what is on this shopping list? Black nail polish, a shag rug, and two pairs of Fuzzy Bunny Slippers of course! (The second pair of slippers are for Bear, not Harold, in case you were wondering).

Harold and John go out on a heist to steal some more computer processors for the machine. This is good because over the last few month, John has apparently been bored and lonely. So much so that even Fusco notices and tries to get him to join the Police Bowling Team. The two head over to a warehouse and I have to say, watching Harold recite physics while trying to jimmy open a locked door with a crowbar was pretty amazing. After the successful robbery, they reboot the machine, connect it to government files in order to regain her memory, and giver her a test run. After she proves she can identify John among a “busy” Time Square, the telephone starts to ring with numbers and it is off to the irrelevant races again. Root’s eyes just light up when she sees it is working, and realizes they can now look for anyone. And by anyone I mean Shaw. Root gets frustrated when priorities 1-100 on Harold’s list does not include finding Shaw. When Harold explains that it would be futile to try to find Shaw before knowing if the Machine was properly functioning, Root reluctantly agrees and sadly like a puppy walks away.

John and Fusco go hunting down the list of 29 numbers that the Machine provided them with and after checking out the first few on the list, it is clear that the machine is still not operating at 100%. John’s first number is just a high school kid who called in a bomb threat to get out of a test and his second one is a dude who was recently released from prison on a murder charge but is now on the straight and narrow (or is he?). Meanwhile Fusco is sent after a guy who has been dead for over a decade and an actor playing a murderer in a play.

Harold concludes that the Machine is unable to contextualize the information that it is receiving, and when he asks the Machine who he is, it does not call him “Admin” but instead labels Root and Harold as “Threats.” And without the standard courtesy of announcing “Stand Clear of The Closing Doors” she slams the doors shut and locks Root and Harold inside the subway car. To be fair, when the Machine looks them up she sees all of the murdering and kidnapping and robbing the gang has done.

Luckily, Root is a freaking BAMF. She grabs a briefcase and smashes open the subway window to escape. After clipping some wires they get the subway car to open again but as soon as the pair mention a Machine reboot the machine freaks the F out and overloads Root’s cochlear implant. At first Root is overjoyed that the machine is yet again communicating with her, but then realizes that the machine was really trying to hurt her. The machine reveals to the pair that they are threats in her eyes, and Root and Harold could not look any more hurt if they tried.

Seeing as John’s next number is actually a hitwoman the Machine hired to kill him, and Fusco still does not know about the Machine, Root and Harold have to fix this problem by themselves. Harold and Root try to reason with The Machine, but every time they get too close she shorts out Root’s implant. Root decides to take herself out of the equation and has Harold put her under anesthesia so she can no longer be a bargaining chip. As Harold tries to explain it that Team Irrelevant doesn’t hurt people, they save people it starts playing videos of Root killing and torturing people, and Harold killing the machine.

She shows Harold video of him teaching her how to identify good and evil back when Harold was naive and idealistic. He was teaching the infantile machine the difference between good and evil, right and wrong; she was to be Anubis weighing people’s hearts against a feather. Finally he asks the Machine was day it is and she says “R” which is mathematical concept that means all number or infinity? I am still not sure, but basically it means that the had everything in history was happening at the same time I think. He then starts reading to the machine all of the people that they have saved together over the years to give her an anchor in time. He explains that people are not “Good” or “Evil” but instead a mixture of both. Saving people, though, that is a pure good. Finally, the Machine looks at Harold and identifies him as admin. The machine is yet again on their side.

With the machine up and running, Root packs up a picnic for a family gathering in Central Park with her new Machine made identity a girl scout leader. These writers really know their audience. 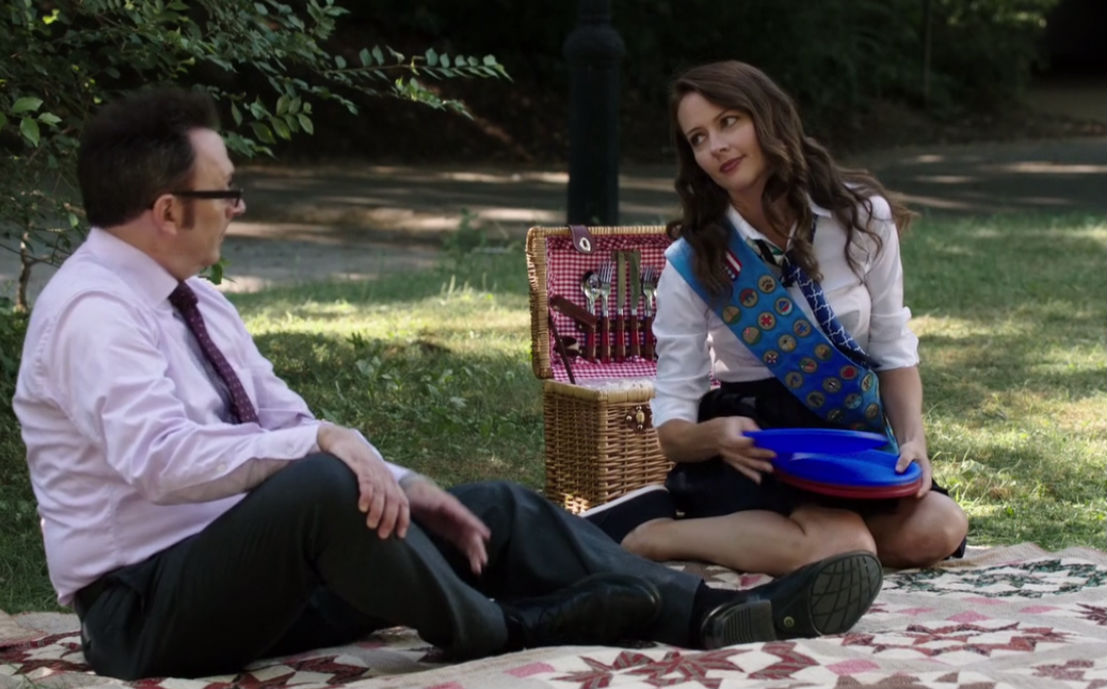 While the sun may be shining, they still have a war to fight. And a Shaw to find.

Also…. Remember that Painter/Ex-murderer? Well he goes into the New York Employment office to get find a new job when a very suspicious women offers one to him on the spot. Not forms, background checks, or references required. All she says is: “You need a purpose, more specifically, you need a job.” Welp, that sounds familiar!

Previous article
Get Your First Look at ‘Killjoys’ Season 2
Next article
‘Person of Interest’: “Truth Be Told” Review