I left this episode of Dead of Summer, “Barney Rubble Eyes”, slightly less confused and slightly more intrigued than I did in the premiere. The operative word here being slightly.

“Barney Rubble Eyes” starts off with Alex, or should I say Alexi, at a piano. (Are all episode of Dead of Summer going to begin with a dude playing piano?). Alexi moved to America from the Soviet Union in the 1970’s with his parents. Before leaving Alexi’s creepy grandfather, who they had to leave behind, gives him some words of advice “You want something, you take it.”

When they get to America Alexi’s father got a job at a dry cleaning business. His boss hates Commies and won’t stop telling people about achieving the American Dream via his dry cleaning store. He also tells Alexi to change his name to something ‘American.’ And this, ladies and gentlemen, is the how Alexi became Alex, the blackmailing, dry clean stealing, preppy boy wannabe sociopath.

Fast-forward to 1989 and the campers are arriving for their first day of camp at Camp Stillwater. I am pretty sure this is the entire camp right here. 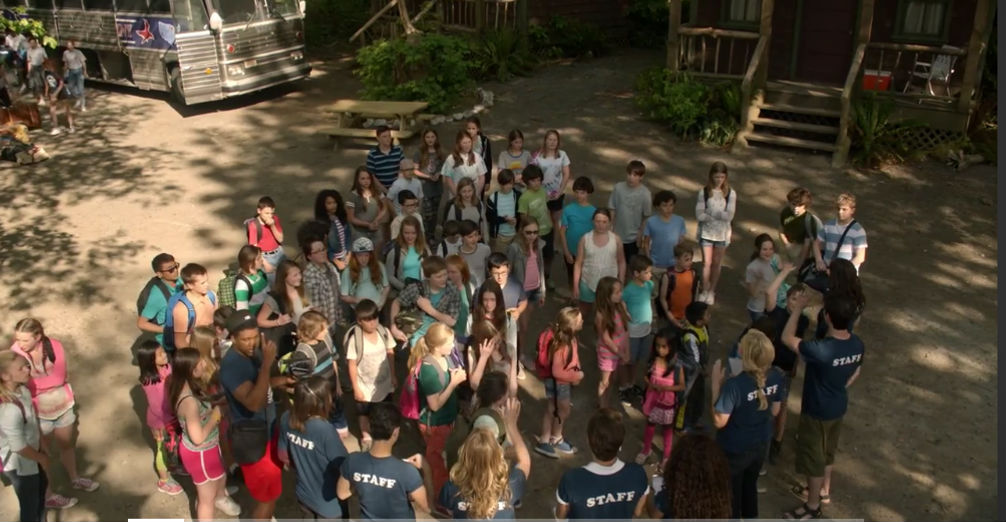 The Stillwater Eight are hard at work getting their campers acclimated by doing group bonding activities and icebreakers. Pshhh, who are we kidding, this is Camp Stillwater, no one actually cares about the campers. About fifteen minutes after the kids arrives Alex leaves Blotter alone with his campers to go hit on Amy. His game consists of talking shit about one of his campers and accusing Amy of being a ‘Comi Sympathizer.” Smooth bro. Smooth. While all of this is happening Blotter is buying drugs from a sketchy tall man in the woods. Two main things to point out here:

That night, when the campers are asleep, the counselors head outside for guard duty. And by guard duty I mean, dicking around outside continuing not to pay any attention to their campers. This is highlighted by the fact that one of Blotter and Alex’s campers, Anton, goes missing. When Alex finds Anton manically drawing a picture of rocks and a tall man in the arts and farts cabin he relays a message from the tall man “Find him or someone will die.”

Deb finds out about Anton being out alone after lights out and loses her shit. She tells the boys that if anything else happens, someone will be fired. Blotter and Alex hear what Deb says and decide to take her advice by 1) Blotter planning a raid of the Cricket’s bunk after lights out and 2) Alex taking Amy to a creepy cabin that night to try and get in her pants, leaving Blotter alone with their eight campers. ::eye rolling so hard over here::

So Blotter brings his campers on a raid, and to our surprise, Anton wanders off again (said no one ever). Drew, Blair, Blotter, Jessie AND Cricket are all in Cricket’s bunk during the raid. We know Amy and Cricket are co-counselors but is Jessie their co-counselor too? Is there only one girls group? Is Jessie the sole counselor of another bunk and she left them alone? I DO NOT UNDERSTAND HOW THIS CAMP WORKS! Anyway Blotter eventually realizes Anton is missing and he and Alex frantically start searching for him.

While the other counselors are doing juvenile things such as raids and talking about D and D, Joel is sulking on the steps of his cabin watching the footage of Deb in the window on his camcorder. She sits down, and they start having some weird sexy talk about secrets but are cockblocked by Blotter and Alex trying to find their lost Russian camper.

Once they find Anton, Deb informs the two boys that someone is going to get fired. And then in the douchiest of douchebag moves, Alex drugs Blotter by putting acid in his baby bottle to make sure he takes the fall. Blotter has a super crazy trip and bugs out. He heads to the rock formation where they previously found Anton and unearths a skeleton. When he brings Deb and Alex back to the scene of the crime though, the skeleton is gone. Also, Deb notices Blotter is tripping balls so she fires him.

The best scene of episode lasted maybe one minute, but it was awesome. Drew comes to talk to Blair who is sitting alone in an empty cabin. When he sits in front of Blair he does a seductive “come hither” gesture with his finger, and Blair moves in ready for to go in for the kiss. 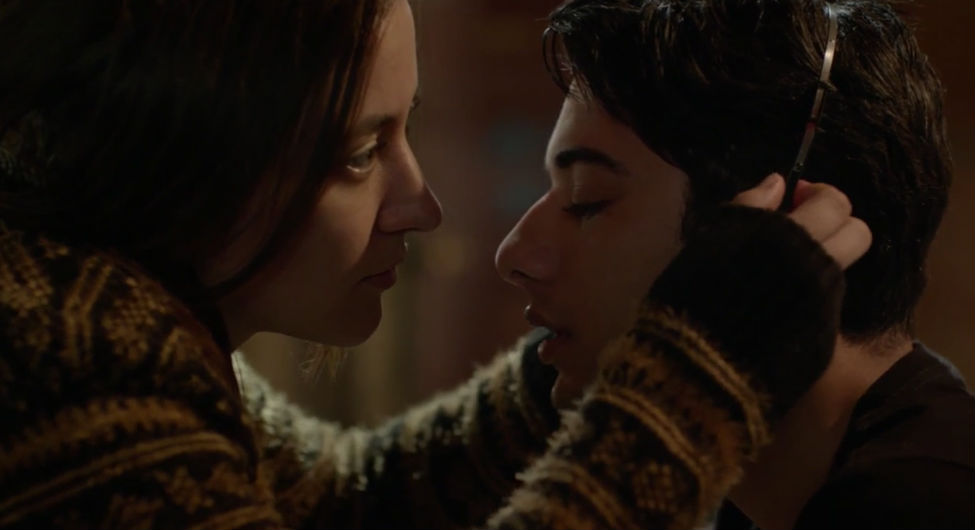 Instead Drew slowly puts his headphones on Blair’s head. He leaves them on for only a few seconds, seductively removes them, and tells Blair to say goodbye to Blotter for him. This show needs more Drew in it, and A LOT less of Alex.

As of now here is the love triangle rundown: Alex wants to get into Amy’s pants. Cricket is in love with Alex. Blotter is in love with Cricket. Garrett has been getting flirty with Amy. Jessie is in love with Garrett. Amy just wants to go with the flow. Maybe I should just draw a diagram. So after drawing that I realized it is more like a love pyramid with Amy at the top, and Drew/Blair and Deb/Joel safely on the outskirts.

The next morning Blotter says goodbye to the rest of the gang. Instead of saying goodbye to Alex though, Blotter rips him a new one by telling Amy how shitty of a person Alex really is. It’s pretty awesome. Now Amy hates Alex, opening a window for Cricket. How Cricket could still be into Alex after this is beyond me, but who am I to question young lust and love.

And then there were seven. As Blotter leaves camp with his head hung low, he sees the tall man. Also, it is revealed that the dealer who sold drugs to Blotter stole those human remains that Blotter dug up.

I think moving forward, if I am going to keep my sanity while watching this show, I really need to take my camp counselor glasses off, and view this not as a camp show. But that isn’t my main issue with this show. The main problem with Dead of Summer is I don’t really care about the show’s mystery. I don’t understand why Anton was the center of the mysticism this week and not a character we know. I am baffled by Anton’s character. It makes sense to have Anton’s character around to highlight aspects of Alex’s story this week. But Anton is also seeing dead people. Like what is the point of this kid? Maybe, in the long run, it will make sense, but this is a new show. There must be a balance between getting me on board for the ride and laying down the building blocks for later on. I mean the most intriguing thing that happened in terms of the mystery is the drug dealer stealing the human remains and that was literally the last scene of the episode.